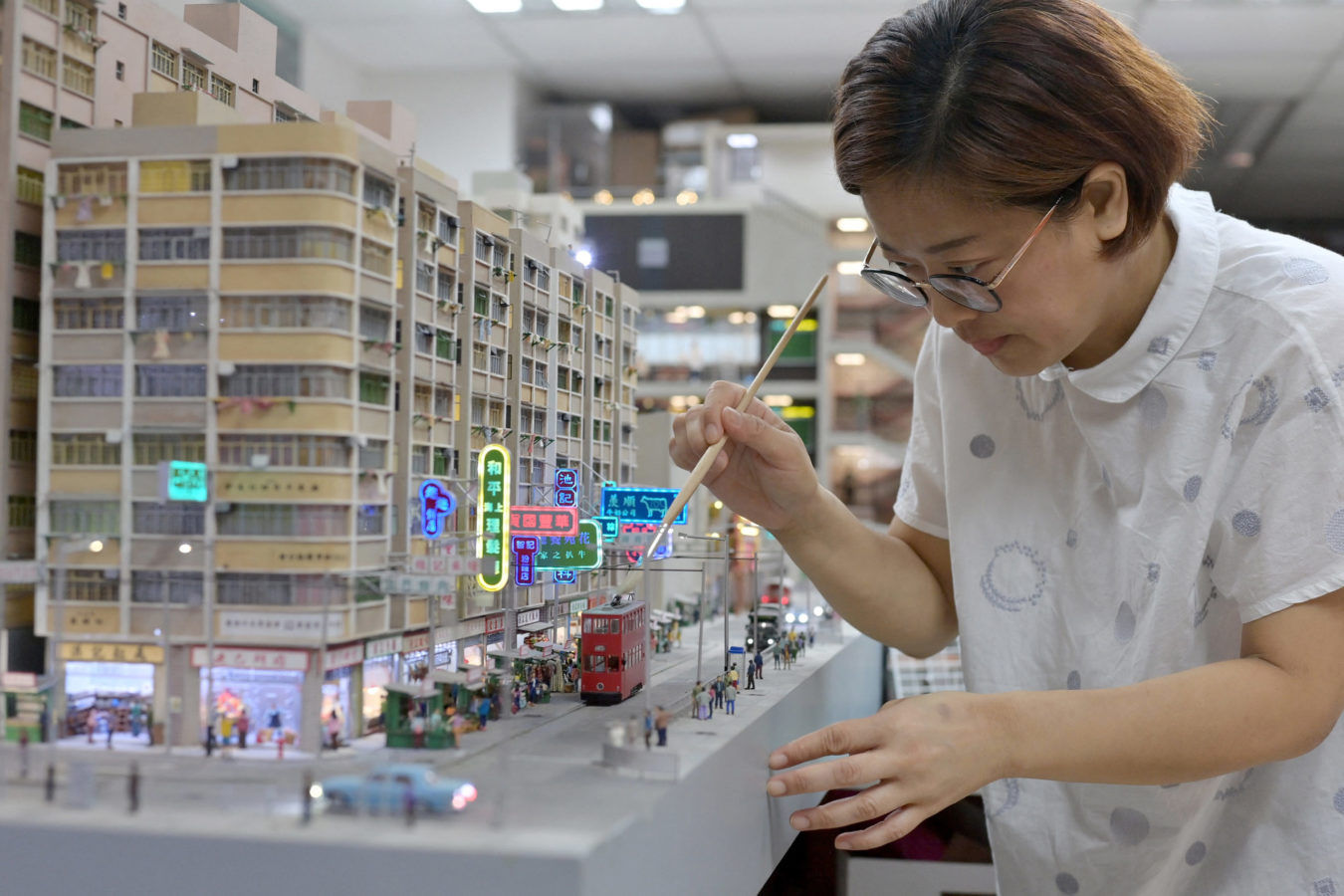 In a packed metropolis where old buildings are frequently replaced by gleaming skyscrapers, two Hong Kong model makers are trying to preserve the city’s architectural past — in painstakingly detailed miniature form.

Stepping into Tony Lai and Maggie Chan’s studio, Toma Miniatures, is like walking into a time machine, if that time machine also shrunk everything around except yourself. In one corner, an entire fairground is laid out, complete with moving rides and a revolving ferris wheel.

On the other side, a tiny reenactment of the city’s fire dragon festival is underway. Elsewhere is a meticulously recreated revolving restaurant and an entire housing block, complete with window laundry and the fast disappearing neon signs that once lit up Hong Kong’s streets with kaleidoscopic abandon.

The two artists share a common passion in bringing their childhood scenes back to life, and say that Hong Kongers are keen to glimpse into the past or recapture faded memories.

“When elderly people see our creations, it ignites their memories,” said Lai, gesturing to their recreation of Kai Tak Amusement Park, which was demolished in 1982. “We would often even see elderly people whose eyes would tear up when they saw our models,” he added.

Preserving the past is difficult in Hong Kong. Historical buildings are often pitted against powerful billionaire real estate developers and government planners who are eager to build more high rise apartment blocks in a city where housing is in desperately short supply. Many colonial buildings and features that were prized by architects, historians and locals have been torn down, although more recent governments have begun to take a slightly more pro-active role in protecting heritage sites.

Born and raised in Hong Kong, Lai fondly remembers his father taking him out on a boat to the city’s outlying Lamma Island, where fishing communities lived in tumble down wooden houses on the shoreline. One of the most complex creations in Chan and Lai’s TOMA Miniatures studio is a diorama depicting residents doing their daily chores in such a village.

“That memory has stuck with me up until now,” he said.

Chan is equally talented in her memory and penchant for details.

“Tony focuses on the big structures, I focus on the smaller details,” she said.

“Even just a poster or a bowl of beef brisket noodles, it could get people to remember something and become emotional,” she explained.

Last year, a historic theatre in the city’s North Point district that first opened in 1952 faced an uncertain fate after being purchased by real estate developers. With its distinctive parabolic concrete arched roofs, it was featured in the 1978 film “Game of Death” starring Bruce Lee, during the golden era of Hong Kong cinema. The theatre was only saved from demolition last month, when property developers instead announced that it would be revamped as a multi-billion dollar heritage site.

Disappearing one by one

Other buildings are not so lucky. Hong Kong authorities recently gave the green light to demolish a four-story pre-war heritage building in Jordan district, a move which has been condemned by heritage conservation groups. Another likely victim is the city’s General Post Office, a post-war modernist block on a prime piece of harbourfront land that is slated to be replaced by a glitzy commercial development.

“Hong Kong is a big city, so there’s lots of architecture or things from our childhood that have disappeared one by one,” said Lai. “If we can use our abilities with miniature models as a way to recreate these, then it’s a happy thing.”

Aside from whipping up joyful, nostalgic memories for residents young and old, the two also hope that international travellers can see their models again once the pandemic ends.

“Hopefully when they visit, they can see that there’s lots of things here that they have not yet discovered,” says Chan. “I hope our creations can bring a sense of what Hong Kong is actually like.”

All images courtesy of AFP/ Peter Parks (Getty). This article was published via AFP Relaxnews/Michael Zhang.

Hong Kong Toma Miniatures Tony Lai Maggie Chan
Lifestyle Asia
Sign up for our newsletters to have the latest stories delivered straight to your inbox every week.