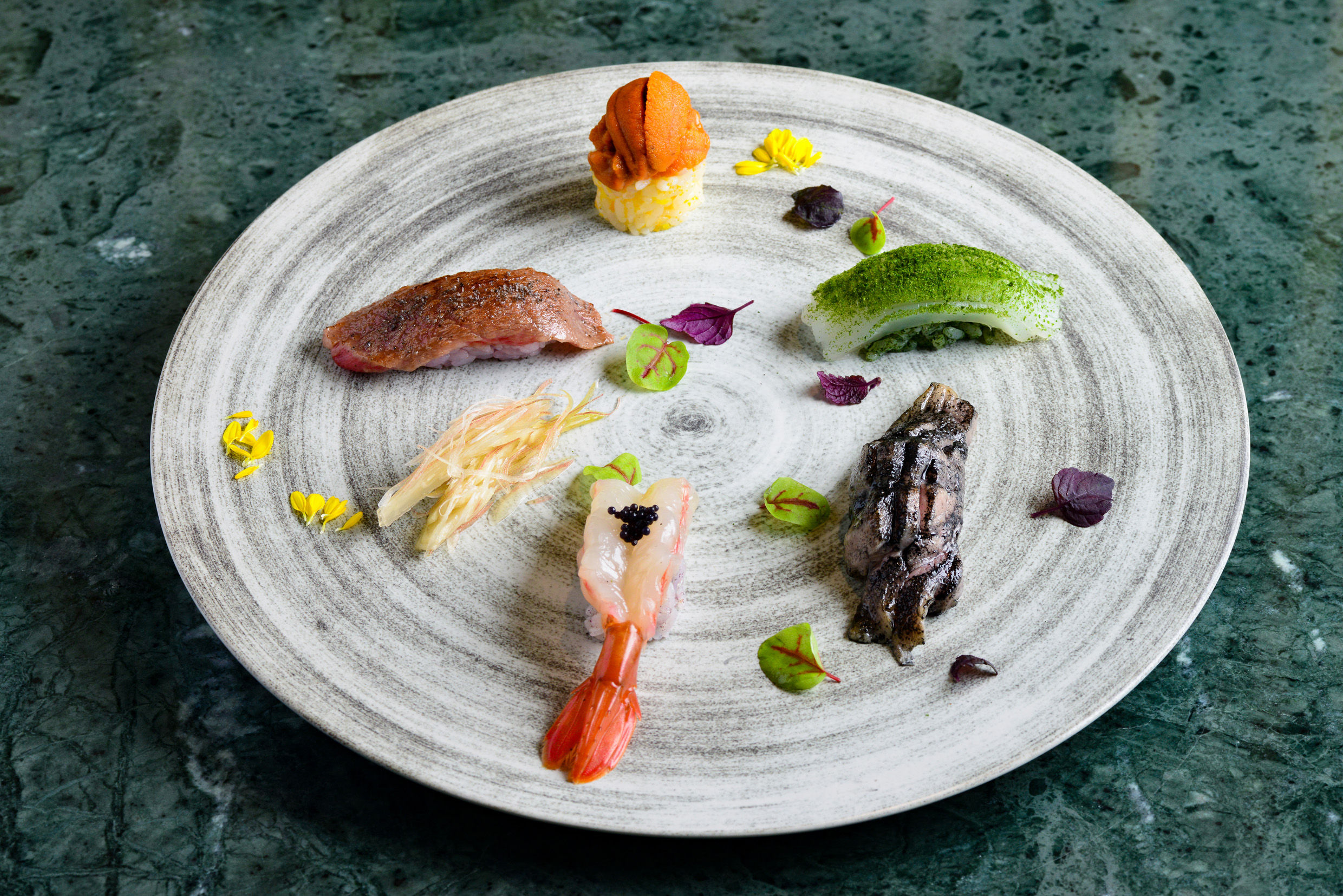 March is a busy time in Hong Kong, as the city prepares for its annual line-up of art festivals — the largest exhibitions of which all take place within weeks of each other and draw visitors from all over the globe. It’s also the time of year when restaurants double-down on art-centric menus and dining deals to attract the flurry of tourists around town. Luckily, there’s no shortage of restaurants to choose from when you find your stomach grumbling after an afternoon of art gazing. In addition to tried-and-true favourites, you’ll want to check out these brand-new openings, from a celebrity chef’s anticipated Hong Kong debut to a Spanish tapas joint and the latest in fine dining omakase.

Slated to open in the InterContinental Grand Stanford this month, Theo Mistral is the anticipated Hong Kong debut from British celebrity chef Theo Randall, who made a name for himself and earned a coveted Michelin star at London’s River Café. After opening his eponymous restaurant Theo Randall at the InterContinental London Park Lane in 2006, followed by Theo Mio at the InterContinental Bangkok in 2015, Randall is continuing his prosperous partnership with the international hotel brand with the debut of Theo Mistral at the InterContinental Grand Stanford this month. The menu includes antipasti, meat and seafood dishes, fresh handmade pasta and wood-oven-fired pizzas, all made with premium local produce as well as imported Italian ingredients. We’re looking forward to checking out the revamped Mistral with this new boost of celebrity star power.

It’s been nothing short of a rollercoaster ride at 8 Lyndhurst Terrace since ZS Hospitality took over the space back in 2016. Originally meant to house four Harlan Goldstein concepts, there’s been a rocky transition period since Goldstein was given the boot in October 2016, with Mamasita’s Cantina later rebranded as MEXUS, the ground floor converted into hip Cantonese eatery Lee Lo Mei, and My Tai Tai and Ee Da Le both closing after less than a year in operation.

The 2nd and 3rd floors have been reworked into Japanese concepts: Yakimon opened at the start of the year; Sakana No Aji will follow in its footsteps this month, promising Japanese dishes with a creative twist — think red sea bream and yuzu hot pot; the 3 Colours ‘Dango’ featuring the sweet, mochi-like Japanese dumpling; and even crispy sushi burgers. For the full range of Executive Chef Suzuki Takeshi’s culinary abilities, you’ll want to go for the kaiseki–style chef’s menu, which will rotate according to the seasons. Sakana No Aji will accommodate 60 diners in total, with a sleek bar area for diving into the deep sake list, as well as a private dining room seating up to eight guests.

Satisfy cravings for sheng jian bao (pan-fried soup dumplings) and dong po rou (fatty pork) this month at 10 Shanghai, the latest restaurant from the group which brought us Thai eatery Mango Tree and Harbour City’s Paper Moon. Their latest venture is inspired by the seductive Shanghainese golden era of the ’30s and ’40s, with a sultry dining room outfitted in dark marble, curved metal-lattice partitions, emerald-green sofas and other Art Deco flourishes. Take a seat in one of the cosy booths and savour the refined culinary traditions of Huaiyang cuisine, with a focus on the cooking techniques of stewing, braising, steaming, roasting and stir-frying. Traditional dishes include aged Shaoxing Huadiao-brined chicken, braised pork belly with fermented rice sauce, mudcrab sautéed with brown bean sauce, double-boiled stuffed duck, and dongpo ‘pork pagoda’ with dried Shanghainese white cabbage.

Popping up in Sai Ying Pun this month, Brut! — a partnership with Iberian ham purveyors Pata Negra House, led by Camille Lisette Glass — promises to be a cosy new spot to nibble on Spanish–style tapas. Ingredients on the menu have been meticulously sourced during numerous trips to Spain by Glass and her team, with highlights being the chestnut and acorn-fed Iberico 48-month ham, and the widest selection of Spanish cheeses available in Hong Kong. Tapas include smoked eggplant and vegetables, devilled eggs with fermented plum and artichoke, and buffalo mozzarella with Kalamata olive tapenade and fried enoki mushrooms. Brut! also aims to be a hub for natural wine lovers, with a beautiful curation of natural wines, selected as much for their antioxidant benefits as for their flavour and aroma.

Get your poultry cravings fixed in a jiffy this month at Little Birdy, a new rotisserie chicken shop recently opened in the quiet Tai Ping Shan corner of Sheung Wan. Co-founders Danielle Giambattista and Yuey Tan have taken a playful approach to the branding, with cheeky taglines and menu descriptions inspired by the mom-and-pop rotisserie shops found around Australia. At the heart of their philosophy is a dedication to clean eating and sustainability, sourcing only Australian free-range chickens and offering a varied menu of superfood salads, handcrafted sandwiches and healthy desserts such as chia pudding. Those seeking a richer indulgence can dip into the ‘Naughty Corner’, which includes chicken and waffles with sriracha butter and maple syrup, and the Thrilled Burger topped with kimchi and gochujang sauce.

Tap into the fiery flavours of Thai cuisine at Market S.E.A., which is dishing up a menu inspired by the street food found across Southeast Asia. The lively restaurant inside IFC mall is outfitted with an open kitchen, separate bar area and outdoor terrace affording views over Victoria Harbour. The menu offers something for everyone, emphasising small plates, skewers, rice and noodles dishes — best washed down with a craft cocktail made from fresh ingredients like pandan and lemongrass. Chow down on mango calamari salad, roast chicken with caramelised palm sugar crumb, lobster laksa noodle soup, and salt-crusted whole goby fish between bouts of shopping.

Tsim Sha Tsui is a hotbed for Japanese restaurants, and the list keeps growing this month with the opening of Sushi Hiro on Ashley Road, the second branch following the Causeway Bay flagship. Founded in 2002 by Hiroi Yoshinobu, Sushi Hiro has gained a loyal following for its traditional Japanese cuisine, bolstered by a team of technically trained and skilled chefs. It’s best known for its omakase menu (priced at HK$1,500 plus 10% per person), but if you’re after a more affordable dining experience you can opt for the dinner set (HK$980–$1,180) or stop in for lunch, which starts at just HK$200. We recommend the Sushi Gozen set, which includes eight pieces of sushi, maki rolls, salad, chawanmushi and miso soup. Get in early as Sushi Hiro seats just 12 in the dining room and 10 at the sushi bar.

Chef Alex Malouf adds to his growing inventory of restaurants (including Kennedy Town’s CATCH and the Middle Eastern–inspired Mama Malouf) with Elementary, a contemporary eatery recently opened in Tai Hang. The kitchen is open Tuesday to Sunday, and emphasises a light, sharing–style menu of dishes such as marinated grilled fish, fresh tomato and burrata cheese salads, grilled veggies, and corn croquettes with a crackling pork crust. The diverse range reflects the wide breadth of cooking techniques from head chef Lewis Dai (formally of Bread and Beast and Blue Butcher), and you’ll find everything from duck heart kebabs and roasted bone marrow next to Korean-style kalbi short ribs with honey-kimchi relish and puffed rice. Following in the same vein as CATCH and Mama Malouf, Elementary aims for approachable, mid-range dining, and is set to be another gem in Tai Hang’s growing repertoire of casual neighbourhood restaurants.

Pho lovers have a lot to rejoice in lately given the explosion of pho shops around town. One of the latest is Pho Up, which appeared recently on Hollywood Road with a snazzy, neon-pink logo and the promise of authentic Vietnamese noodles made from scratch — from traditional pho to variations such as bun bo hue, the earthy pork-broth noodle soup loaded with pork blood and pork knuckle; and bun rieu, or tangy crab and tomato vermicelli. At a reasonable HK$88 a bowl, you’ll have plenty of spare change to round out your meal with a selection of tasty sides, from avocado and tofu salad to fresh prawn rolls with yuzu dressing.

Hong Kong’s latest carnivore den takes its inspiration from the British Isles, an archipelago off the northwestern coast of Europe famed for its delicious, fresh seafood and tender beef. Opening in the heart of SoHo this month, Steak on Elgin is helmed by head chef Clayton Ma (previously of private kitchen G7), who will push his agenda of sustainability and sourcing quality produce from the region in a menu which spans classic steakhouse appetisers, sides, seafood and meat. Tuck into 100%-grass-fed UK beef selections across a range of cuts — from aged filet mignon on the bone, to ribeye, sirloin, and a porterhouse for two — complemented by an expansive wine list of over 350 bottles featuring Old and New World varieties.

Hong Kong New Restaurants New Eats Dining Restaurants Where to eat Elementary new openings brut Openings little birdy sakana no aji market s.e.a. 10 shanghai steak on elgin Theo Mistral by Theo Randall
Leslie Yeh
Editor in Chief
Having worked as a lifestyle editor for almost 10 years, Leslie is thrilled to be writing about the topic she loves most: wining and dining. When she's not out pounding the pavement for the latest new restaurant opening or tracking food trends, Leslie can be found at home whipping up a plate of rigatoni vodka and binge-watching Netflix with a glass of Sauvignon Blanc in hand.
Dining Restaurants Food Trends Drinks Travel
Sign up for our newsletters to have the latest stories delivered straight to your inbox every week.