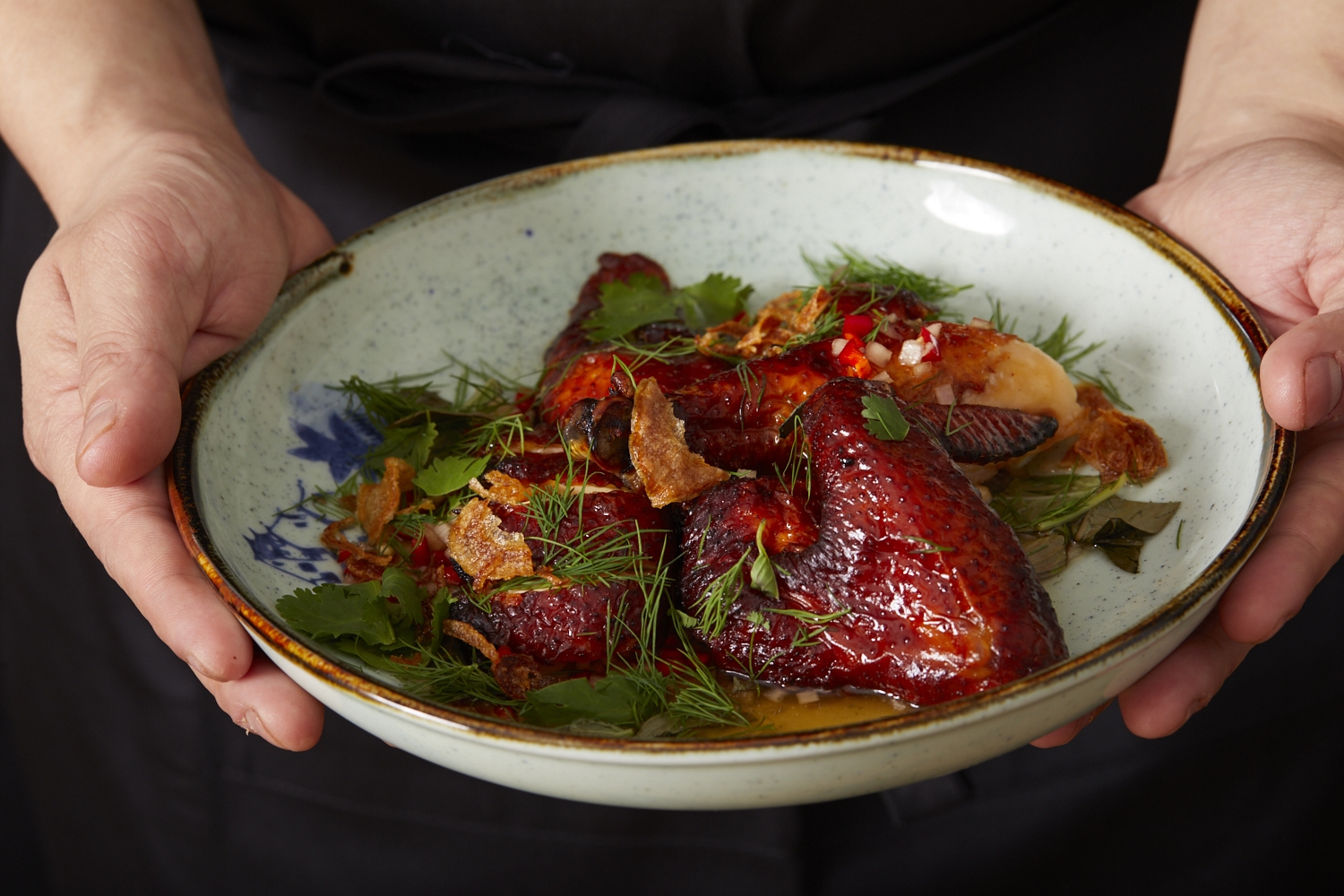 10 new Hong Kong restaurants to dine at this May

We may be almost halfway through the year, but don’t worry about starting your pre-summer diet just yet. Why? Because May brings with it a slew of brand new restaurant openings, with several high-profile restaurants that have local foodies buzzing with anticipation. From a lively izakaya to French-Japanese fine dining, rustic Italian to modern Chinese, there’s no shortage of new restaurants to dine at this month. Here are our top new tables to book this month.

Opening in mid-May is Fukuro, the latest from Black Sheep Restaurants, which revitalises the concept of a late-night bustling izakaya. Inspired by many trips to Japan by BSR co-founders Syed Asim Hussain and Christopher Mark, Fukuro will bring a lively taste of Tokyo to Hong Kong, specialising in shared small plates and grilled items — all washed down with brilliantly concocted whisky highballs and a careful selection of sake. With its underground vibes and late-night hours, Fukuro caters to Central salarymen looking for a place to relax and unwind after a taxing day at the office, with stylish interiors designed by A Work of Substance, and specific décor elements taken from the Edo period in Japanese history. Expect smart service, a communal atmosphere and flavour-packed dishes, from fresh sashimi platters to Nitsuke soy-braised fresh local fish and A4 Wagyu sukiyaki.

For those seeking a place to spend their paycheque this month, an alluring fine-dining palace has just opened in the brand new H Queen’s tower, opened by the same group behind Michelin-starred ÉPURE. With brilliant gastronomy and impeccable service at its core, Arbor presents a beautifully curated culinary experience from start to finish (starting at HK$468 for a 3-course lunch and HK$1,488 for a 9-course tasting dinner), from the seasoned wine pairings to the stunning French-Japanese plates. Chef Eric Räty (formerly of Café Gray Deluxe) employs classical technique with a whimsical twist — we particularly loved the ebisu oysters with sea grapes and Icelandic langoustine with candied kombu from our recent tasting (stay tuned for our full review). For sceptics who say fine dining is dead, a trip to Arbor may be just what’s needed to renew your faith.

From shrimp dumplings to xiao long bao to siu mai with a Peruvian twist — Hong Kong’s about to get its ample fix of dumplings in all shapes and forms this month as Pirata Group’s Chifa opens on Peel Street. Named after the culinary tradition of Peruvian-Cantonese cuisine, the niche food offering here is the initial draw, but diners are sure to stay for the affordable prices, relaxed ambience, stellar drinks list and thoughtful hospitality that’s become a Pirata Group signature. Offering something new for Hong Kong foodies, Chifa combines the skill and technique of well-made dumplings with the spicy and bold flavours of Latin American for the best of both worlds. We’re big fans of the group’s Peruvian-Japanese restaurant, TokyoLima, and can’t wait to see what’s in store at Chifa.

Dumplings aren’t the only thing keeping Pirata Group busy this month — they’ll open not one, but two, restaurants in May: The second is Madame Ching, a modern, all-day Chinese diner on Star Street in Wan Chai. In a bit of a reoccurring theme for Hong Kong restaurants (think Mama San and Fang Fang), the establishment is named after a “mysterious madame”; this time, it’s a pirate who took over the seas by storm, bringing to Hong Kong a bold, punchy approach to tried-and-true Chinese flavours.

The casual space caters to food-loving Millennials with retro touches inspired by old Hong Kong, and a glass-plated open kitchen where an assortment of traditional Cantonese roasted meats hangs. Dine on char siu and roast goose with a range of sauces and chutneys, alongside new-wave Chinese dishes including an intriguing ‘ma po’ chip and dip. Inventive cocktails infused with Asian ingredients are at the heart of the beverage selection — think premium spirits mixed with ingredients like Sichuan peppers, ginger, goji berries and spices.

Over on the Southside, a casual Italian eatery is set to open this month from 8 creATEive (founded by the two pairs of brothers, Chellaram and Roopchand) — the group responsible for bringing us Rummin’ Tings and pizzeria Amalfitana, located just across the way at The Pulse in Repulse Bay. Their second Italian offering is an artisan pasta bar, providing a place for beach-goers and daytrippers to fuel up after an afternoon of sunbathing.

Bunker down in the quaint seaside setting and savour Italian classics from head chef Michel Degli Agosti (previously master pizzaiolo at Amalfitana), with an all-day menu composed of rustic, comfort food dishes. Trattoria faves include a selection of fresh salads, antipasti, spaghetti bolognese, rustic rigatoni, and grilled meats and seafood. Chase it down with an affordable list of wines and Vermouth-based cocktails for a pre-dinner aperitif or post-meal nightcap. The muted seaside palette fits in seamlessly with the surrounds, and we can imagine the alfresco venue is going to become a particularly popular destination come summer.

With the debut of such high-profile restaurants as Theo Mistral, East TST is slowly building up its reputation as a top dining destination. This month sees another new opening to the mix: Elia, a 2,000-sq.-ft. restaurant and bar space inspired by the Spanish seaside. Opened just in time for summer and affording panoramic views over the harbour, Elia will offer live music, a reasonably priced cocktail list, and pleasant nautical-themed decor inspired by old Spanish galleons, from paddles across the ceiling to braided belt dividers and rustic peddled chairs. Chef Miguel Lopez focuses on an ingredient-driven, seasonal Spanish menu, with highlights including crunchy lamb with roasted gazpacho, coquelet chock full of prawns and herb-marinated chicken, and hearty paellas with both meat and seafood options.

The wait is finally over for Shake Shack fans. The ubiquitous burger joint opens its doors this month on 1 May, and we can confirm the question that’s been on everyone’s mind: Yes, the Hong Kong outlet is just as good — if not better — than the original. We headed in for a special sneak preview, and couldn’t resist devouring the classic Shack Burger with its juicy, all-natural Angus beef, melted American cheese and butter-grilled potato bun; the classic curly fries, crisped to a golden-brown; and the chicken sandwich, loaded with pickles and a tangy sauce.

We assume queues will be out the door, so get there early (it opens 1 May at 11am if you want to be the first in) to get your fix of burgers, hot dogs, frozen custard, and a range of Hong Kong-exclusive items such as the Milk Tea Shake (vanilla custard blended with black tea); HK Style (vanilla custard, French toast, peanut butter sauce, banana and maple sugar); and the The Heart & Tart of Central (vanilla custard, egg tart and strawberry puree). The first 100 people in line when doors open will also receive a free pair of Shake Shack sunglasses.

Those who can’t get in the doors at the notoriously hard-to-book Sushi Saito this month may want to turn their appetites instead to another Tokyo import from the same group: Yakinku Jumbo, which recently landed in the heart of Central. Specialising in grilled Wagyu beef, the yakiniku expert is a favourite of Sushi Saito’s Takashi Saito, with a bevvy of accolades and an esteemed No. 2 rating on Japan’s Tablelog under its belt. Setting the standard for yakiniku in Japan and now in Hong Kong, the barbecue joint sources all of its beef from a single region, serving only chilled meat — never frozen — for optimum texture and juiciness.

With a special emphasis on the specific tastes and textures of different cuts of beef, head chef and owner Norimitsu Nanbara personally selects the cuts that are sent to Hong Kong weekly, with each piece boasting super-fine, evenly distributed marbling. Guests can choose from over 20 kinds of rare cuts including hip, top round, flank and more; with each piece, cut, sliced and grilled specifically to balance out individual characteristics. Try the Noharayaki thinly sliced sirloin, lightly broiled for 10 seconds and served with beaten egg yolk — dipped in the house tare sauce, the recipe for which remains, of course, a closely guarded secret.

A Wan Chai stalwart, Mexican restaurant Agave has recently opened its first outlet on Hollywood Road, giving Centralites a suitable lunchtime option for well-priced tacos and burritos (and perhaps a cheeky margarita). Opened in 2000, Agave has seen an impressive 18 years on the Hong Kong food scene, garnering a loyal fan club with its simple but well-made Mexican cantina dishes and tequila-based tipples.

We gave it a try recently and would gladly return for the tacos (11 varieties in total), from juicy carne asada made with USDA grilled ribeye, to the beer-battered fish taco with cabbage and chipotle mayo, and the smokey al pastor (our favourite of the bunch). More adventurous diners should also give the ensalada de nopal a try, one of the few dishes in town featuring roasted cactus. And if you believe the restaurant’s claim of serving the “Damn Best Margaritas in town”, you won’t want to leave without trying the Serrano al Melon Margarita, made with Blanco Tequila infused with serrano chillies, Midori and lime juice.

Hong Kong New Restaurants Dining Restaurants Where to eat new openings Fratelli shake shack Restaurant Openings best new restaurants Elia fukuro chifa arbor la petite maison madame chine yakiniku jumbo agave
Leslie Yeh
Editor in Chief
Having worked as a lifestyle editor for almost 10 years, Leslie is thrilled to be writing about the topic she loves most: wining and dining. When she's not out pounding the pavement for the latest new restaurant opening or tracking food trends, Leslie can be found at home whipping up a plate of rigatoni vodka and binge-watching Netflix with a glass of Sauvignon Blanc in hand.
Dining Restaurants Food Trends Drinks Travel