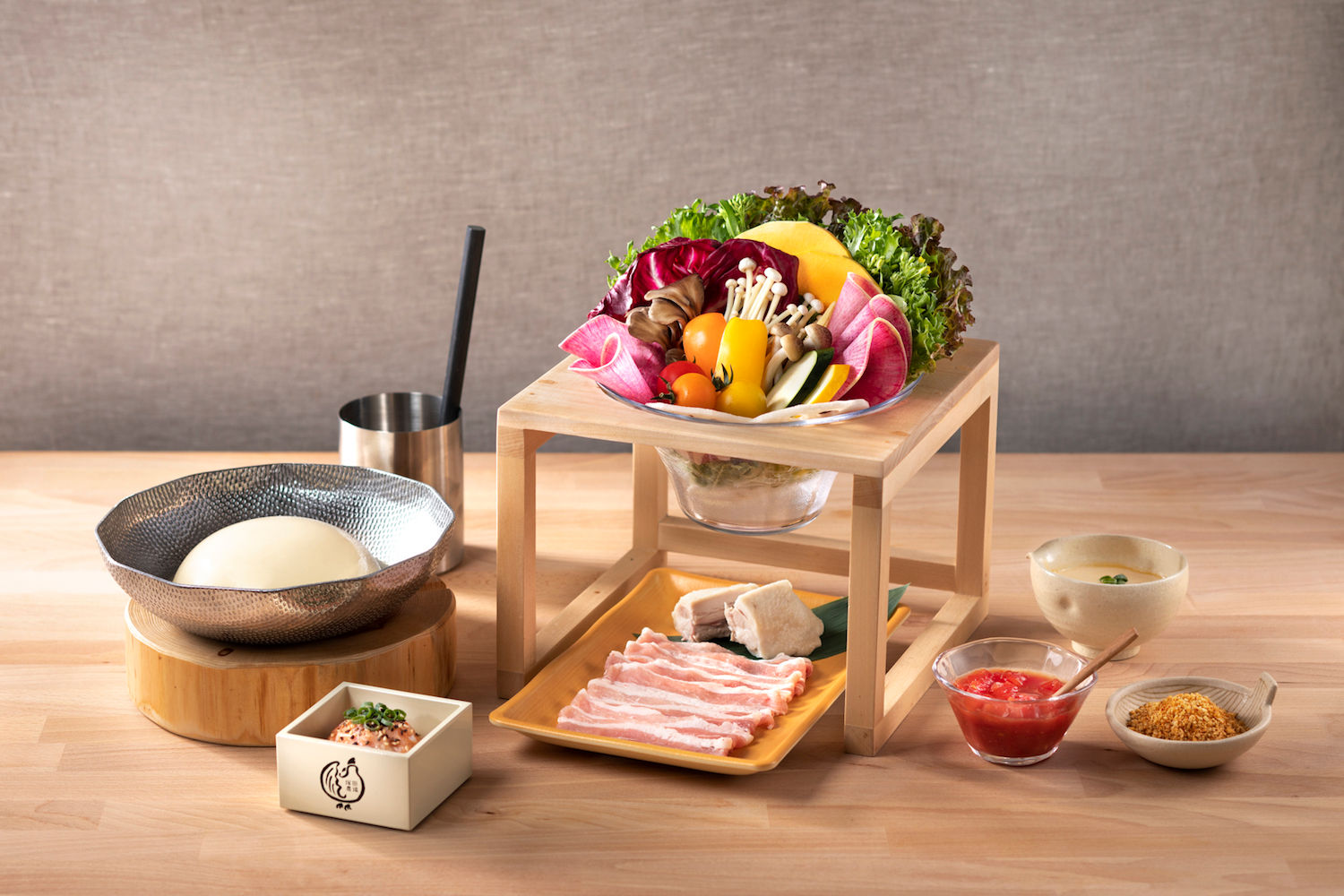 We’re well into summer junk season, so if you’re apprehensive about rocking your beach ensemble, July’s new restaurant openings might just spur you towards your diet goals. It seems a health wave is sweeping through Hong Kong, with a bevy of health-centric restaurants taking root on both the Island and in Kowloon, from collagen-infused hot pots to bountiful Aussie-inspired breakfasts, and the highly anticipated new venture from one of Hong Kong’s most recognisable health-minded heroes. Without further ado, here’s where to enjoy a guilt-free meal this month — as well some places to indulge in guilty pleasures.

After seven years of being at the forefront of the sustainable-food movement in Hong Kong, Peggy Chan is preparing to take her flagship restaurant, Grassroots Pantry, in a bold new direction this month, transforming the light and airy all-day diner into a more premium, plant-driven tasting menu experience. Starting from 25 July, Grassroots will evolve into Nectar — an elevated concept centred around holistic, produce-driven and locally-sourced seasonal tasting menus. While the format may be different, the focus remains on cultivating an appreciation for farm-to-table and plant-based cuisine; while we’ve yet to hear specifics on the new menu, it’s almost certain that Nectar is going to play an instrumental role in furthering the green revolution in Hong Kong.

As one of the city’s most passionate advocates for sustainable consumption, Chan will also continue to build upon her work as an educator with Pollen Lab, a new research and development platform to drive changes in the food system; and The Collective’s Table, an initiative which helps chefs share knowledge and best practices through collaborative menus and pop-ups. Stay tuned for more details in the coming weeks.

Pirata Group has announced their latest restaurant, Honjo, which is slated to open its doors in late July in Sheung Wan. The second Japanese restaurant in the group’s portfolio after Nikkei spot TokyoLima, Honjo is a spacious, 120-seat restaurant with a versatile layout divided into Tin Toys Lobby, Safari Room, Red Armoury and Blue Suite — each area boasting distinct décor to allow for a variety of shared dining experiences.

Designed by Ben McCarthy of Charlie & Rose, Honjo’s interiors hark back to the 1950s with a retro-futuristic vibe propagated by stained glass windows, eclectic knick-knacks and hanging light fixtures. The modern Japanese restaurant focuses on reinterpreting the traditional cuisine through a contemporary lens, with novel ingredients and flavours employed in sushi and sashimi, tempura and hot dishes — all washed down with an expansive collection of New and Old World wines.

Next door to Honjo, the good times roll on at temakeria TMK, Pirata Group’s casual eatery specialising in colourful variations of hand-rolled sushi. An edgy diner boasting a punk rock vibe, the convivial environment here is fuelled by a selection of Japanese highballs, craft beers and sakes — the latter overflowing in traditional square wooden masu cups.

Business execs seeking a new place to take clients and make use of flashy expense accounts will want to check out Kakure, a sleek new 3,000-sq.-ft. restaurant and Ginza-style cocktail and whisky bar that just opened in Prince’s Building. Comprising a teppanyaki grill and fresh sushi bar, the restaurant offers a serene and stylish enclave for diners to chow down on Edomae-style sushi and sashimi, teppanyaki, and other Japanese specialties from sukiyaki hot pot to marbled tuna belly donburi.

Prized Hida Wagyu beef is the specialty of the teppanyaki grill, while the sushi counter showcases the exacting knife skills of the chefs as they prepare fish flown in fresh from Japan daily. The warm glow of Japanese lanterns evokes the feeling of a hidden Ginza-style bar, with the drink offerings comprising over 120 rare and vintage whiskeys including a selection of Asian-inspired cocktails. For large parties, two private rooms and one tatami-mat room are available, each seating six or 12 with two rooms combined.

With The Peak Galleria newly renovated and scheduled to reopen in phases this summer, an exciting new dining destination from Tokyo’s Roppongi district is gearing up to welcome beef lovers through its doors. Opening mid-July, 37 Steakhouse & Bar promises to offer a New York-style steakhouse experience set in an elegant and lofty setting polished with oak and brass.

From The Food Story Group — behind recent openings such as Artisan de La Truffe and J Pot — 37 Steakhouse & Bar builds upon the popularity of its Tokyo and Shanghai outposts, serving up spectacular views alongside a range of decadent beef cuts that highlight the group’s longstanding partnership with esteemed Japanese butcher, Hiyama. Expect expertly grilled cuts of the intensely flavoured Kuroge Wagyu beef paired with a rare range of Sawaya Matsumoto sakes. The massive, 10,000-sq.-ft. space will also house the group’s new all-day dining concept, Mina House.

Injecting a dose of bright and sunny Aussie-style café vibes to Central is Ninetys, newly opened on Shelley Street. With a sister location in Wan Chai, the Central outpost boasts a range of vibrant all-day breakfast offerings paired with premium espresso (custom blended and roasted by Zest Specialty Coffee Roasters from Melbourne), and single origin coffees (from Taiwan’s Taster’s Coffee).

Sip on a flat white while tucking into a hearty, produce-driven menu of eye-catching dishes from bountiful green salads to crab toasts with folded omelettes, and potato cakes with sriracha mayo and poached eggs. And yes, there’s also a classic avo toast on the menu.

Having mastered the art of perfectly pan-fried sheng jian bao, pop-star-turned-chef Oscar Siu Yun-pong’s latest venture is a family affair named after the publishing house his father used to run. The father-and-son team have collaborated on the new menu at Ging Sun Ho — presenting Yun’s popular pan-fried dumplings and steamed soup dumplings alongside a range of other Shanghainese specialties.

Hungry gourmands will want to head over to Mong Kok to get a taste of fatty pork belly with vegetable fried rice, fried pork ribs, Shanghainese soup noodles with fish balls, and braised chicken fillet in honey and black pepper sauce. To commemorate the special opening, the restaurant is also serving an exclusive flavour of sheng jian bao filled with steamed pork and roast goose.

The Japanese restaurant group behind Tsukada Nojo in Harbour City is getting ready to debut their popular hot pot brand in Hong Kong, famed in Japan and Singapore for its collagen-rich chicken stock. Presented in single-person servings, Bijin Nabe’s hot pot is built around a vitamin- and mineral-rich Golden Collagen Chicken Stock that’s boiled for eight hours with organic chickens, made rich and creamy from the bones and cartilage.

Touted to reduce inflammation and boost immune systems, the hot pots are served up in single camera-friendly sets, with an array of colourful appetisers, desserts, mocktails and vegetable juices to pair. Lunch hot pots range from HK$78–$168 per person, while dinner starts from HK$168 per person, with an expanded choice of meat, seafood, vegetables and toppings.

If you’re a fan of finger-licking-good chicken wings, you’ll be happy to hear that popular wing purveyor Wingman has just opened in Central, after successfully proving their concept at PMQ Taste Kitchen incubator last year. Since then, owners Jack Law and Elliot Nicholas have grown their fan base on Deliveroo, leading the duo to take the leap and open their first brick and mortar shop on Cochrane Street near Lyndhurst Terrace.

Seating 30, the compact shop offers 11 flavours priced at HK$69 for 6 wings (one flavour) — with additional shared platter options for 12, 24 or 28 wings. Flavours range from a fiery Cajun dry rub to Thai sweet chilli and hoisin sauce with sesame. Eager for a deal? Stop by for Wing Wednesdays ($5 wings), and the weekend all-you-can-eat-and-drink brunch which runs from 12–4pm on Saturdays and Sundays.

Prime your palate with a range of Southeast Asian-inspired appetisers from papaya salad with soft-shell crab to saffron shellfish cakes, smoked duck spring rolls and tuna tartare. Larger platters cooked on the asador include wood-grilled lemongrass spring chicken, Australian Wagyu and Argentinian grass-fed rib-eye. Keep an eye out for weekly promotions such as Gin O’Clock, which runs from 5–7:30pm daily; and ‘Sunset Sessions’ every Saturday afternoon with DJs spinning a mix of deep house, dance and electro on the decks.