Summers have historically been a slow period for restaurant openings in Hong Kong, but 2019 is bucking the trend with a number of highly anticipated restaurants slated to open in June. From the first Hong Kong restaurant run by Asia’s top culinary star to the long-awaited sophomore venture from Australian chef Shane Osborn; the jazzy new wine bar inside the Landmark Mandarin to Black Sheep Restaurants’ first foray at The Peak — here are 10 of the best new openings to try in June. We hope you’re hungry.

Chef Julien Royer of Singapore’s acclaimed Odette (#1 on Asia’s 50 Best Restaurants 2019) makes his debut in the 852 with Louise, a casual spot in PMQ which eschews white tablecloths for colonial-style décor inspired by the restaurant’s heritage surrounds. Housed in the former Aberdeen Street Social space and operated by JIA Group, Louise is a two-storey affair with all-day dining and drinks served at the ground-level Tropical Greenhouse Lounge, with à la carte lunch and dinner available in the upstairs Ivory Boudoir dining room. Expect honest cooking, rustic home-style recipes imbued with the familiar cornerstones of chef Royer’s cooking: elegant presentation, refined technique and a rigid commitment to top-notch produce in dishes such as la truffade with Cantal cheese and braised beef in red wine with confit carrots. Reservations are available starting 1 June.

Another fine-dining chef is entering the casual dining sphere with the debut of Shane Osborn‘s highly anticipated sophomore venture, Cornerstone. Opening in the second week of June, the Central restaurant is inspired by Osborn’s native land and embraces the effortless, produce-led sensibilities of modern Australian cuisine, grounded in simple presentations refined with sophisticated technique. Arcane has amassed a loyal following over the years, and we have no doubt that Cornerstone will be just as popular as its sibling, with both local and international produce woven into the all-day dining menu. Farm-fresh offerings range from oxheart tomatoes with burrata and rocket pesto to yellowfin tuna carpaccio dressed in soy and yuzu, in addition to a number of vegan and vegetarian options. A well-curated list of just under 50 bottles includes special grape varietals chosen to complement the sunny Australian bistro fare.

The menu is crafted by chef Mario Paecke; formerly Richard Ekkebus’ sous-chef at Amber, he now leads his own brigade in the gleaming new Amber-Somm kitchen. Like his mentor, Paecke’s dishes take inspiration from Japanese ingredients in a menu loosely categorised as neo-bistro French food; highlights include Tasmanian salmon confit, crispy white asparagus and tarragon sabayon, and the “Raspberry 1000-Feuilles” with whipped pepper berry ganache. The wine-centric restaurant encourages both wine novices and aficionados to discover new vintners while tucking into lunch and dinner à la carte menus, as well as a weekend ‘Sommeliers Lunch’ offering with 3- or 4-course menus priced at HK$538 and HK$608, respectively.

Black Sheep Restaurants co-founders Syed Asim Hussain and Christopher Mark are on the move again with a new opening at The Peak, hot on the heels of their newly opened ode to Mexican cuisine, Taqueria Super Macho. Named Rajasthan Rifles, the throwback restaurant whisks us back to the 1920s — with the British Indian Army stationed on the Indian subcontinent. The restaurant aims to replicate the boisterous mess halls which served as cafeterias as well as social spaces for both British- and Indian-born officers to commingle over drinks and a game of cards. The merging of cuisines which grew from this fractious period of history manifests in a menu here spanning tandoori items and curries, including a signature lamb biryani dish. The kitchen is helmed by Executive Chef Palash Mitra of New Punjab Club, and if the latter’s recent Michelin win is anything to go by, we can expect good things from this new Anglo-Indian mash-up.

Many will remember James Sharman from One Star House Party — the travelling band of chefs who embarked on a world tour with the aim to build 20 restaurants in 20 different countries. Now, the globetrotting chef — who picked up his culinary tricks under the tutelage of chefs such as Tom Aikens and Rene Redzepi — is back with a permanent set-up in Hong Kong, the city where the idea for his pop-up party first came to fruition. Having explored a vast array of cultures and cuisines on his journeys, Sharman is going back to basics at his new restaurant The Leah, channelling the traditions of his native England to offer “British food done right.”

Set in a green oasis atop Lee Garden Two, The Leah keeps the party going from Sharman’s pop-up days: There’s a list of playful tipples, a lively setting complemented by an expansive terrace, and a menu of classic British dishes focused on freshness and seasonality. Sharman’s locavore mindset is on display in no-frills dishes such as gnocchi cooked in beef fat, whole roasted Dover sole and a sumptuous short-rib pie. By day, the restaurant caters to members of the family club Maggie & Rose; evenings from 7pm onwards see The Leah transformed into a lively modern restaurant for guests to enjoy a tipple at the rustic outdoor bar, or savour hearty English classics inside the greenery-filled dining room. 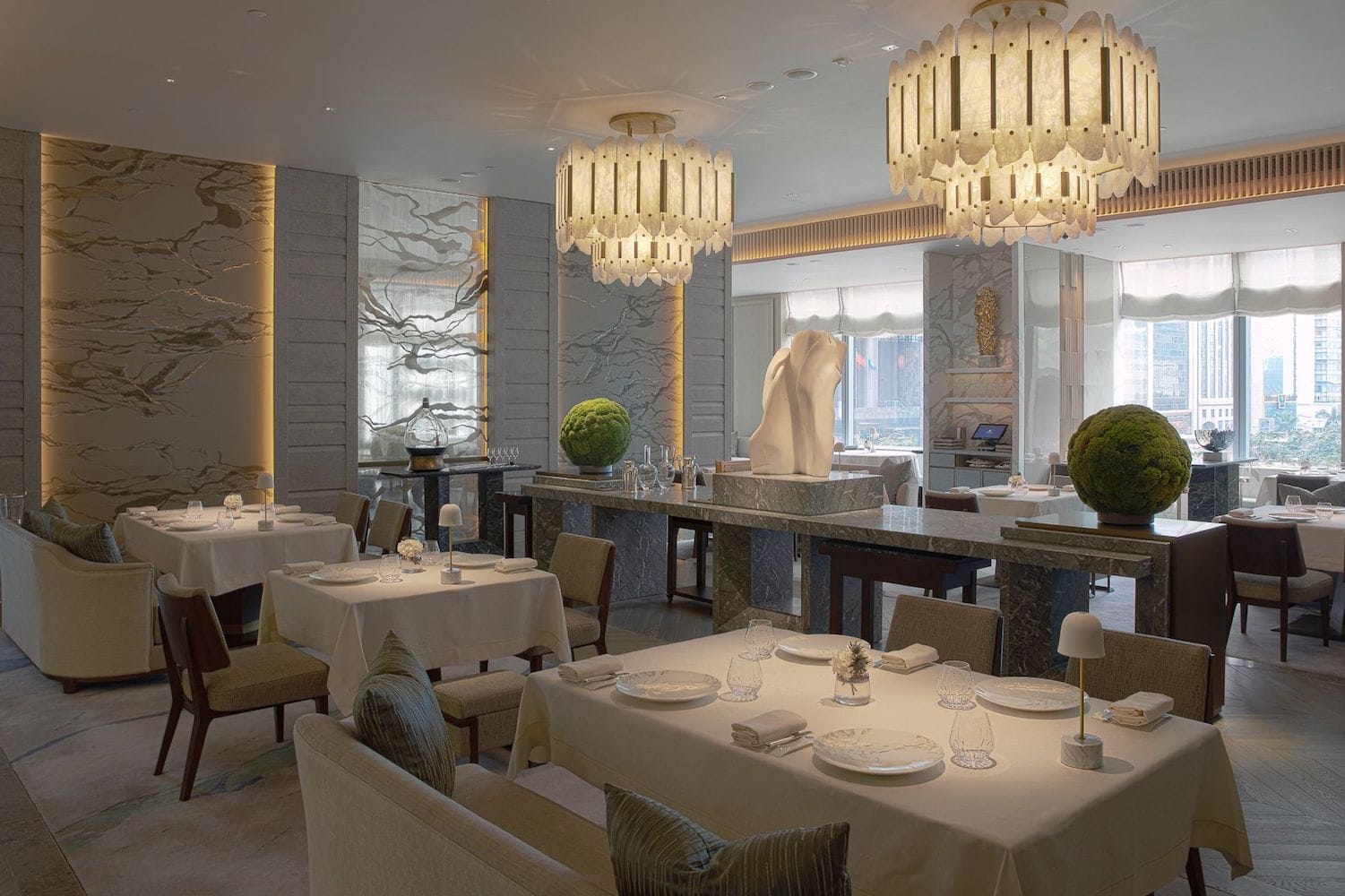 Tai Hang’s blossoming dining hub is getting another lively injection this month with the opening of Kona, a new Japanese kappo-style restaurant specialising in robatayaki, donburi and more. Tucked away behind Lin Fa Kung Street, Kona — named for the Japanese word for “corner” — is manned by Executive Chef Yip Chun Ki, who parlays 25 years of experience into a creative menu which starts with familiar Japanese dishes and spins off into contemporary riffs. While kappo traditionally calls for the chef to choose the menu from start to finish, Kona also offers à la carte options in addition to the full omakase experience. The grill anchors much of the menu: flame-tinged skewers of Australian Wagyu with ‘cheese yolk’, pork belly sprinkled with sansho and salt and pepper wings. For a more substantial offering, don’t miss the Wagyu beef bowl (pictured above), where sukiyaki-style Wagyu chuck is dressed in truffle shavings and crowned with a wobbly orange yolk.

Make way for another Michelin-decorated Piedmontese chef set to make his mark on the Hong Kong dining scene, this time as consulting chef of the new Castellana Restaurant in Causeway Bay. Chef Marco Sacco of Italy’s two-Michelin-starred Piccolo Lago oversees a fine-dining menu which embraces the butter- and sauce-reinforced cooking of Italy’s Piedmont region, an area heralded for two of the country’s most prized gastronomic exports: wine and truffles. Head up to the 10th floor of the Cubus Building and prepare to indulge in creamy artisanal cheeses, aromatic truffles, sumptuous desserts and a 300-bottle-strong selection of premium Piedmont wines. Tasting menus include the 5-course Traditional Set (HK$680), featuring tuna tartare and snails and chanterelle mushroom risotto; the Seasonal Menu (HK$880) ups the indulgence factor with dishes such as ravioli bathed in Toma cheese and Grana Padano, and pan-fried lamb loin with mushroom crust and potato mille feuille.

Opening on the same floor as Sensu and modern hot pot restaurant J Pot, the new Wagyu Vanne completes the trio of restaurants by Gosango inside the Tower 535 building — all dedicated to showcasing the premium Hiyama Kuroge Wagyu beef from one of Japan’s oldest meat suppliers. The stylish Wagyu Vanne focuses on yakiniku, and is modelled off Tokyo’s acclaimed Yoroniku restaurant opened by celebrity chef Vanne Kuwahara. More elegant and discrete than J Pot, Wagyu Vanne by Gosango employs frosted Japanese shōji screens to partition off the space, which can accommodate up to 100 guests. The focus is on Japanese grilling fused with contemporary Western touches (think Wagyu toast with Hollandaise and caviar, and Wagyu pappardelle bolognese), all centred around the premium Hiyama Wagyu, renowned for its rich and sweet aroma coupled with intense fat marbling. Expert yakiniku masters guide diners through the grilling process, with both à la carte and set menus available.

Recently opened in Tsim Sha Tsui, Nomu adds to the dizzying mass of Japanese omakase restaurants in the neighbourhood, offering another option for gastronauts keen to place their dinners in the hands of seasoned sushi chefs. With the name derived from the Japanese term “to drink”, it’s no surprise that the restaurant is stocked with over 100 unique sakes and wines to pair with the seasonal, premium ingredients flown in from Japan. The counters are manned by veterans in the local Japanese dining scene, with menus rooted in sushi and artistic kaiseki, including a mix of raw and cooked dishes. The evening omakase service caters to a maximum of 18 patrons, with three tasting menus ranging from HK$880 to HK$1,880. Sake pairings are also available during lunchtime (a dangerous proposition), with more affordable daytime options including the 6-course Daytime Omakase (HK$580), a 4-course Executive Prix-Fixe (HK$438), and a “Create Your Own” option (HK$280) where chefs will design your courses based on budget and availability of ingredients.

Start your day off like the French do at Le Pain Quotidien, which continues to expand its presence with the opening of its fourth outlet in Hong Kong. The newest Gallic-inspired café has popped up inside of the Tsim Sha Tsui Centre, where customers are invited to escape their hectic day and savour the simplicity of classic French fare at wallet-friendly prices. Keep hunger at bay with flaky croissants, Belgian cream donuts and loaves of rustic wholewheat and sourdough bread from the on-site bakery; while bistro-style lunches consist of open-faced tartines loaded with fresh, seasonal produce, colourful salads and heartier soups and stews. Open from 8am, those feeling peckish in the mornings can stop in for fluffy Belgian waffles, organic French toast and bright berry bowls.