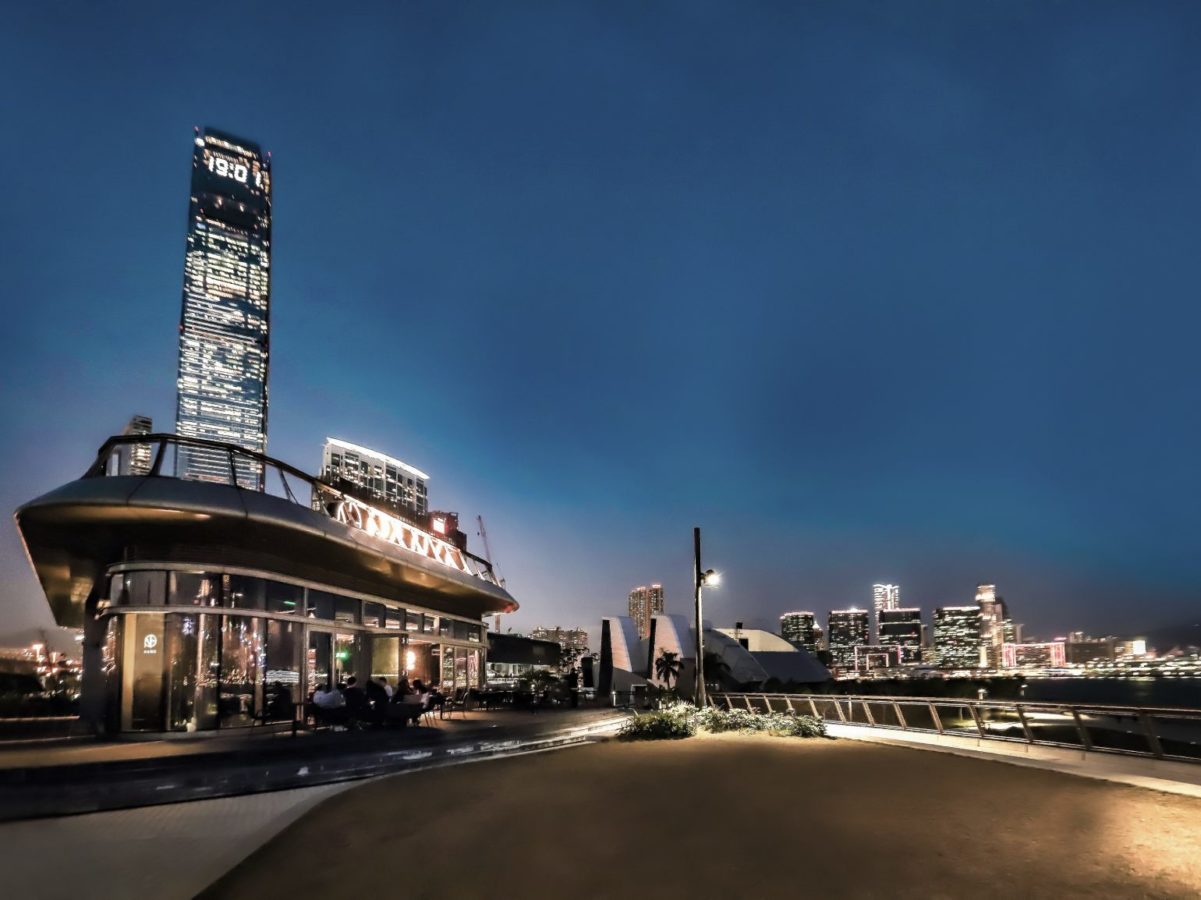 Add all these newly opened restaurants in Hong Kong to your bucket list.

After what seemed like a lifetime of temporary closures, we’re glad to see that the city is slowly opening up once again with brand new eateries — as well as a few under-the-radar venues that may have been left by the wayside when they opened during Hong Kong’s most difficult period in recent months. From buzzy bistros vying for the best spot to admire the city skyline to new neighbourhood pizza joints, centuries-old Japanese sukiyaki to hype-worthy cafes, these are the best restaurants to try in Hong Kong this May.

West Kowloon has been the city’s buzziest hotspot to soak up the skyline of late, and this opening is sure to impress the keenest snap-happy diner. As the only standalone two-storey restaurant on the museum strup, Pano vies for the best view in Hong Kong with its unobstructed, high-rise view of the harbour. At its helm is executive chef Ken Lau, a Peninsula Hong Kong alum who previously held successive posts at Verandah, Chesa, Felix and Gaddi’s. At Pano, Lau moulds Asian flavours and local ingredients with the technique and flair of fine French cuisine.

Don’t miss the ten-course ‘Celebrity Tasting Menu’ (HK$1,118; or seven courses for HK$888), featuring nostalgic dishes that pay homage to the collective Hong Kong memory, as well as chef Lau’s childhood. Other highlights that are sure to be crowd-pleasers include the oyster tartare, uni risotto and Wagyu beef, two ways.

La Camionetta is SoHo’s newest friendly hangout, opened by husband-and-wife duo Benito and Giulia Proust. Fashioning a whimsical kitchen on Elgin Street featuring the facade of a VW bus, La Camionetta rounds together the couple’s fond memories of the south of Europe, bringing a vibrant menu of handcrafted pizzas, and a simple drink repertoire of spritzes, wine and cocktails that will no doubt have punters sipping along the slopes when the weather gets hotter (and the city opens up for more conviviality).

Anyone who’s watched Crazy Rich Asians will be familiar with the Hokkien/Teochew phrase ‘ga gi nang’, which means family or ‘our own people’. With that in mind, GaGiNang is one of Ocean Terminal’s latest openings, bringing an innovative spin and stunning presentations of traditional ‘da laang’ recipes. Think baby oyster congee, goose liver and caviar canapes, slow-cooked Angus beef with Chiu Chow barbecue sauce, and of course, chilled crab.

Fans of Franco Pepe’s Kytaly may be wondering what was left in its wake following its dramatic exit from the SAR in December. The former outpost of “the best pizza in the world” is now Babacio, a born-again pizzeria playing to Italian classics (and really making use of that pizza oven, we surmise), with the sunny patio and lemon trees of its previous space still very much intact. The result is authentic Neapolitan-style pies that are beautifully charred in all the right places, with toppings that run the gamut from traditional tomato-and -mozz DOP perfection to spicy salami, as well as white pizzas (sans tomato sauce), deep-fried ‘Montanara-style’ pies as well as calzones. All solid-sounding stuff, with no pineapple in sight — so you purists can rest easy.

While Gordon Ramsay’s Maze Grill is no more ever since the celebrity chef pulled all his Hong Kong venues in early April, in its place at Harbour City you’ll find the same winning waterfront view and banquette seating to bask in all its glory. The new Harbourside Grill brings on Executive Chef Armand Sablon, who previously trained with three-Michelin-starred Chef Marc Haeberlin at Auberge de l’Ill in Alsace. Look forward to prized dry-aged beef from the UK and wet-aged cuts from USA, Argentina and Kagoshima, while French-tinged modern cooking rounds out a classic steakhouse menu. The expansive terrace is also open with a smaller menu of appetizers and a shortlist of the grill signatures to go with your sunset tipples.

Japanese food lovers are in for a treat for their next hop over to Tsim Sha Tsui. Joining age-old Japanese names at the shopping landmark such as Kyoto Ichinoden (a century-old kaiseki restaurant famed for its trademarked Kura Misozuke, or sweet miso-marinated fish) is none other than Hiyama, Tokyo’s first-ever sukiyaki restaurant, established in 1928 — now in Hong Kong for its first international outpost, complete with stunning harbour view.

Beef aficionados may recognise the name right away — Hiyama has been a purveyor of superlative Wagyu since 1912, prized for its eponymous cuts of perfectly marbled beef. Its restaurant in Tokyo was accoladed with a Michelin star for nine consecutive years, and now you can also have a taste without needing to jump on a plane. Definitely go for the signature A5 Kuroge Wagyu Ribeye or Cross-bred Wagyu Sirloin, swirled for just a few seconds (and not more) in their sukiyaki broth — a historic recipe that’s stayed flawless for the past hundred years.

Hype hounds will find it hard to not to at least show up for a snap on the ‘gram at another of Harbour City’s latest openings, which is none other than Virgil Abloh’s Off-White café — located right inside the boutique. With a crisp monochrome design to match the store interiors, a coffee and milkshake bar and a not-small menu of snacks and all-day-breakfast items, it’s an ideal spot to rest your feet after your hefty shopping haul, though the kitschy beverages and — inexplicably — dishes such as miso cod and slow-cooked short ribs, feels like a real missed branding opportunity. This is the brand’s first café in Hong Kong.

Japan’s most famous apple pie turnover shop has landed in the SAR. First opened in Tokyo with locations across Yokohama and Kamakura, Mille Mele Tokyo’s popularity skyrocketed as it was widely claimed to be “the number one apple pie shop in Japan” and is often not seen without snaking queues. Created by award-winning chef Marco Polo Molinari, Mille Mele Tokyo boasts flaky, buttery crusts and balanced fillings using stewed Fuji apples and soy custard cream — filled just before eating so the crust stays crispy and light. Now, the question is, between Mille Mele Tokyo and last year’s Japanese apple pie transplant Ringo Apple Pie (RAPL), which rendition comes out top?

The heat of Hong Kong summer always has one thirsty for an icy beverage, and after a long day of browsing and sifting through the cacophony of Mong Kok, you may be just in the market for a tall, cold ice-cream shake. Shake Up is the American-style milkshake bar’s second branch in the city, boasting decadent dessert shakes all made using Mövenpick ice cream — to which you can customise with homemade toppings or choose from their curated flavours.

This new opening introduces a brand new ‘#Cheerup’ series, which features low-sugar ice cream for more health conscious sippers, with a range of three flavours paying tribute to the healthcare workers at the frontlines fighting the pandemic: ‘Angel in White,’ ‘Bittersweet Shake’ and ‘Red Been Missing You’ — What’s more, Shake Up! Stores are offering two-for-one discounts to all medical staff to thank them for their hard work during this trying time.

For some, nothing beats a good ol’ fashioned sports pub. Sai Wan Ho’s latest opening by Shore Hospitality is the whimsically fashioned The Blind Pig — named after for the Prohibition-era concept of roping in customers to see the headlining oddity (usually eponymous) for a cover charge, and offering a complimentary drink to get around the alcohol ban. While that business model certainly isn’t happening at this SoHo East establishment, it is definitely bringing some old school comfort grub, craft beers and classic cocktails with a twist. Tuck in to some no-fail Frank’s Redhot buffalo wings, crispy pork knuckle platters and weekend roast dinners, which will be even more welcoming as the sports seasons return on the big screen come autumn.

New restaurants to try in March 2021