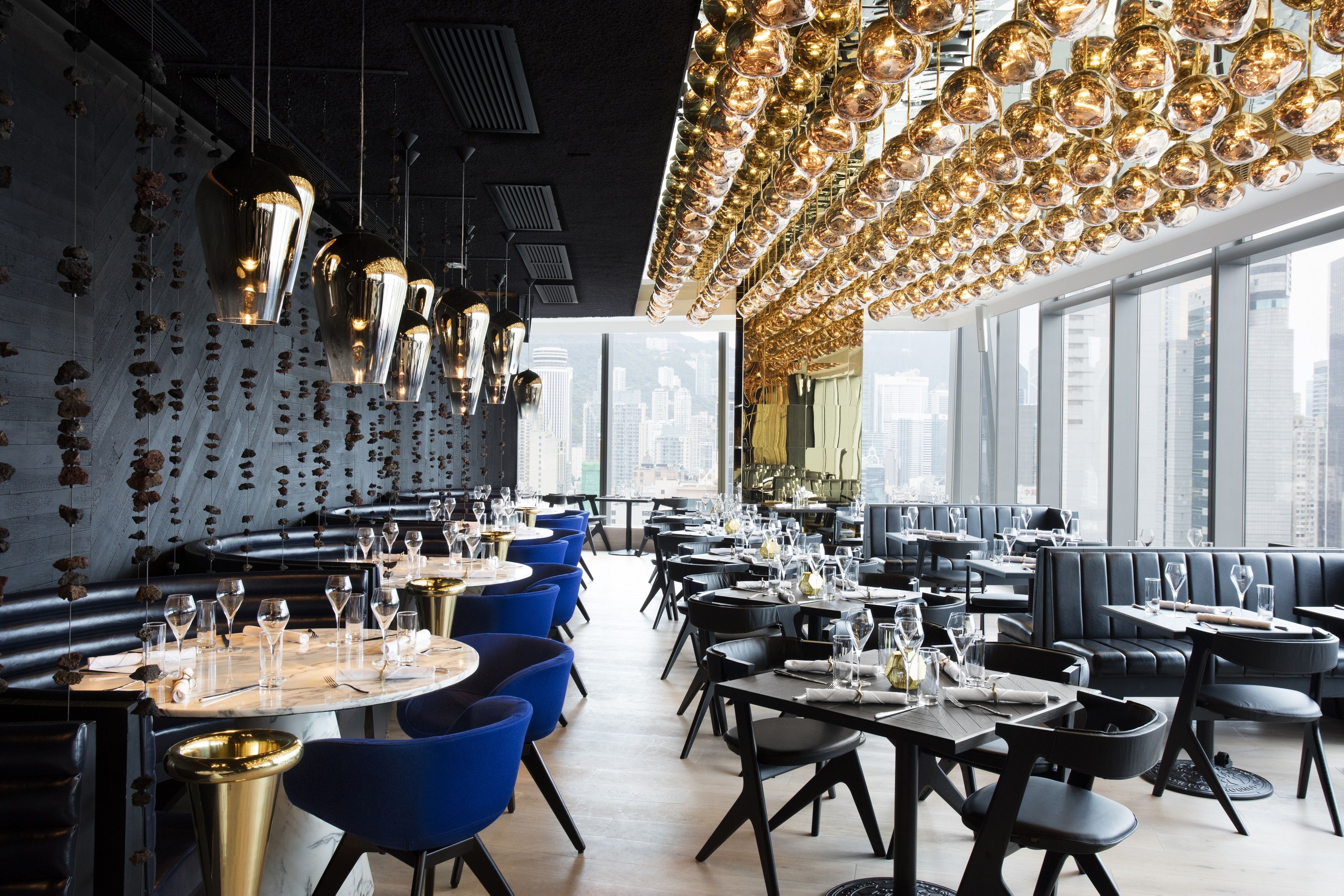 Somehow it’s already August, and that means a brand-new slate of openings and temporary pop-ups around town. Whether you like sushi or Spanish cuisine, Thai food or truffles, there’s plenty going on to satisfy your appetite, so start making your bookings today. We hope you’re hungry, Hong Kong, because this is going to be one extremely tasty month.

Located on a quiet stretch of Queen’s Road West in Sai Ying Pun, Okra Kitchen opened earlier this year and quickly gained a loyal following with its casual izakaya cooking and list of natural wines and sakes. Now, just upstairs, chef Max Levy has launched Okra Bar, an omakase-only sushi bar that seats a maximum of eight guests. The white-tiled space is all about simplicity and purity: the omakase (HK$880 per person) consists of three to five cold dishes, ten to twelve pieces of sushi, and three to five hot dishes, all of which change regularly according to seasonality and availability of ingredients. (An optional beverage pairing is available for HK$400.)

Reservations are required for the one nightly seating, payment is made in advance, and patrons are asked to refrain from wearing any strong fragrances that may affects the flavours of the sushi. If you can live with those rules and you’re a sushi lover, this is one spot you’ll want to get a seat at as soon as possible.

Hot on the heels of an collaboration with Berlin’s celebrated restaurant dóttir, Test Kitchen is preparing to welcome another talented chef to its new home in Sai Ying Pun. From 11–13 August, Irishman Mark Moriarty will stage a three-night pop-up that showcases the very finest produce from his home country over seven courses.

The winner of the 2015 S.Pellegrino Young Chef competition, 24-year-old Moriarty has been travelling the world and showing off his talents along the way; in Hong Kong, he’ll be joined in the kitchen by two of Ireland’s most celebrated chefs, Mickael Viljanen and Graham Neville, who will collaborate with Moriarty on the modern Irish menu. There are only two seatings per night (HK$1,580 per person including wine pairings), so it’s recommended that you book promptly, as these pop-ups do sell out in advance.

Not to be confused with Causeway Bay’s Alto 88 or the Tsim Tsa Shui bar Alto, ALTO is situated on the top floor of the new V Point tower and features incredible views of Victoria Harbour. With remarkable interiors by internationally acclaimed Tom Dixon’s Design Research Studio (the firm’s first restaurant project in Asia), the decor here is just as noteworthy as the food.

The kitchen is overseen by American chef Mike Boyle (formerly of Bistecca), who has crafted what might best be described as an eclectic menu, one that includes a wide variety of influences but has a clear focus on grilled items and vegetable dishes. Notable ingredients include beef sourced from Argentina and the United States, as well as branzino imported from Europe, not to mention a global selection of more than 100 wines. For the views and interiors alone, this is one you won’t want to miss. Fortunately, it’s already open for lunch, dinner, and weekend brunch service.

The second of four restaurants opening at 8 Lyndhurst Terrace this summer, My Tai Tai is another dining concept under the direction of self-proclaimed celebrity chef and entrepreneur Harlan Goldstein and is set to soft open from mid-August. In the kitchen, chef Amphon Phoomphookieo and his largely Thai team will cook dishes from different regions of Thailand — chicken satay, grilled pork neck, pineapple fried rice, etc. — which will be made using traditional recipes but modern techniques.

Featuring ornate and exotic interiors, My Tai Tai was inspired by the idea of an affluent Thai woman and her love of adventure and food, which is meant to be reflected in the sophisticated decor. Though yet to be finalised, the wine list will be selected to complement the Thai flavours, and the cocktails will be made with Asian ingredients.

We’re always excited to see a new opening in always-charming Tai Hang, especially given the recent reports about its restaurants struggling to stay open. Second Draft is a ground-floor gastropub concept in the new Little Tai Hang development, and it’s the product of an exciting collaboration between chef May Chow (of Little Bao), Mongkok’s TAP — The Ale Project, and local brewers Young Master Ales. Stepping inside this corner spot might immediately remind of someplace else, as the wall stencils, wooden furniture and colour scheme are all directly inspired by the iconic Star Ferry.

In addition to a wide selection of beers — the entire range of Young Master Ales is available as well as a selection of local and international craft brews — the menu intrigues with its East-meets-West sensibilities. Two perfect examples: the Sichuanese standby mapo tofu here becomes mapo burrata, with the Italian cheese replacing the tofu; and Hong Kong-style French toast is topped with a decadent slice of foie gras instead of butter.

While we’re on the topic of beer, Australian craft brewery import Little Creatures has opened up shop in Kennedy Town inside a massive 6,000-square-foot space that was formerly a flour and sugar warehouse. The space retains its industrial feel, with high loft ceilings and exposed pipes, not to mention the tanks in which three beers are brewed on-site. (Little Creatures’ full range of beers is available in bottle format.)

Food at brewpubs can sometimes seem like an afterthought, but these are Aussies we’re talking about. The comforting lineup of dishes includes hearty pizzas, pastas, sandwiches and, of course, a smashed-avocado bowl. Big plates include a grass-fed ribeye steak and lamb chops with sausage and a pistachio-mint salsa. If you’re not a beer drinker, there are a handful of wines to keep you happy, or if you’d prefer not to drink at all, check out the weekday breakfast, featuring a breakfast pizza.

Having operated as a supplier of luxury ingredients to some of Hong Kong’s most exclusive establishments for more than a decade, it makes perfect sense that Emporio Antico would go ahead and open its own space where customers can enjoy some of the gourmet items they import. At their Wan Chai tasting room, guests can snack on truffles, caviar, meats and cheeses from around the world — with wine pairings, of course.

Diners can choose between going a la carte or with a set menu, and the experience can be more of a drinks and hors d’oeuvre things or a full-blown dinner. The dinner set (HK$980 for two people) includes six courses, but if you’re all about the truffles it might be best to go for the black truffle tasting set (HK$980 per person), which includes four courses made with winter truffles sourced from Australia.

It’s no problem finding quality French food in some parts of Hong Kong, but that hasn’t always been the case in Taikoo Shing. Now, however, there’s Eiffel Bistro, operated by the same restaurant group behind Pastis and F.A.B., among others. Inspired by the bistros of Paris, this is a casual spot that’s best for a quick lunch or some wine and charcuterie. The menu sticks to traditional plates — think French onion soup, snails in garlic butter, foie gras, steak tartare, and so on. It may not be groundbreaking, but for those who live or work in the area, it’s a welcome addition.

From 16–21 August, the colourful Sai Ying Pun tapas spot La Paloma will host Spanish chef Álvaro “El Palanca” Ramos as he serves a seasonal seven-course menu (HK$398 per person). A blend of Spanish and Asian flavours, the menu will feature dishes such as short ribs over saffron paella, Thai-style mussels and Andalusian shrimp fritters. This special menu will be available for one week only, so bookings are recommended.

From 17 August–11 September, critically acclaimed Bo.Lan will become the second restaurant to stage a takeover of Isono’s space at PMQ. Run by a husband and wife team, the Bangkok restaurant is currently on the list of Asia’s 50 Best Restaurants. From 17–20 August only, the menu will feature signature dishes from Bo.Lan at lunch and dinner. From 21 August–11 September, however, the team will be serving dishes from ERR, their casual dining concept opened in Bangkok’s old town in June 2015. In contrast with more formal Bo.Lan, ERR’s menu consists of upscale versions of Thai street food and snacks, served alongside Thai-inspired cocktails, allowing for a taste of Bangkok without having to get on a plane.

Hong Kong Tom Dixon Restaurants Isono La Paloma Bo.lan Okra My Tai Tai Test Kitchen ALTO Mark Moriarty Second Draft Little Creatures Emporio Antico Eiffel Bistro Okra Bar Okra Hong Kong
Michael Alan Connelly
Head of Digital Content
A Chicagoan by birth and a New Yorker by habit, Michael has more than a decade of experience in digital publishing at leading titles in the U.S. and Asia. When he's not checking out Hong Kong's newest restaurants and bars or jet setting around the globe, you'll find him hanging out with his dog Buster and enjoying an Aperol Spritz.
Travel Hotels Restaurants Cocktails Culture Italy Art Music Cheese
Sign up for our newsletters to have the latest stories delivered straight to your inbox every week.