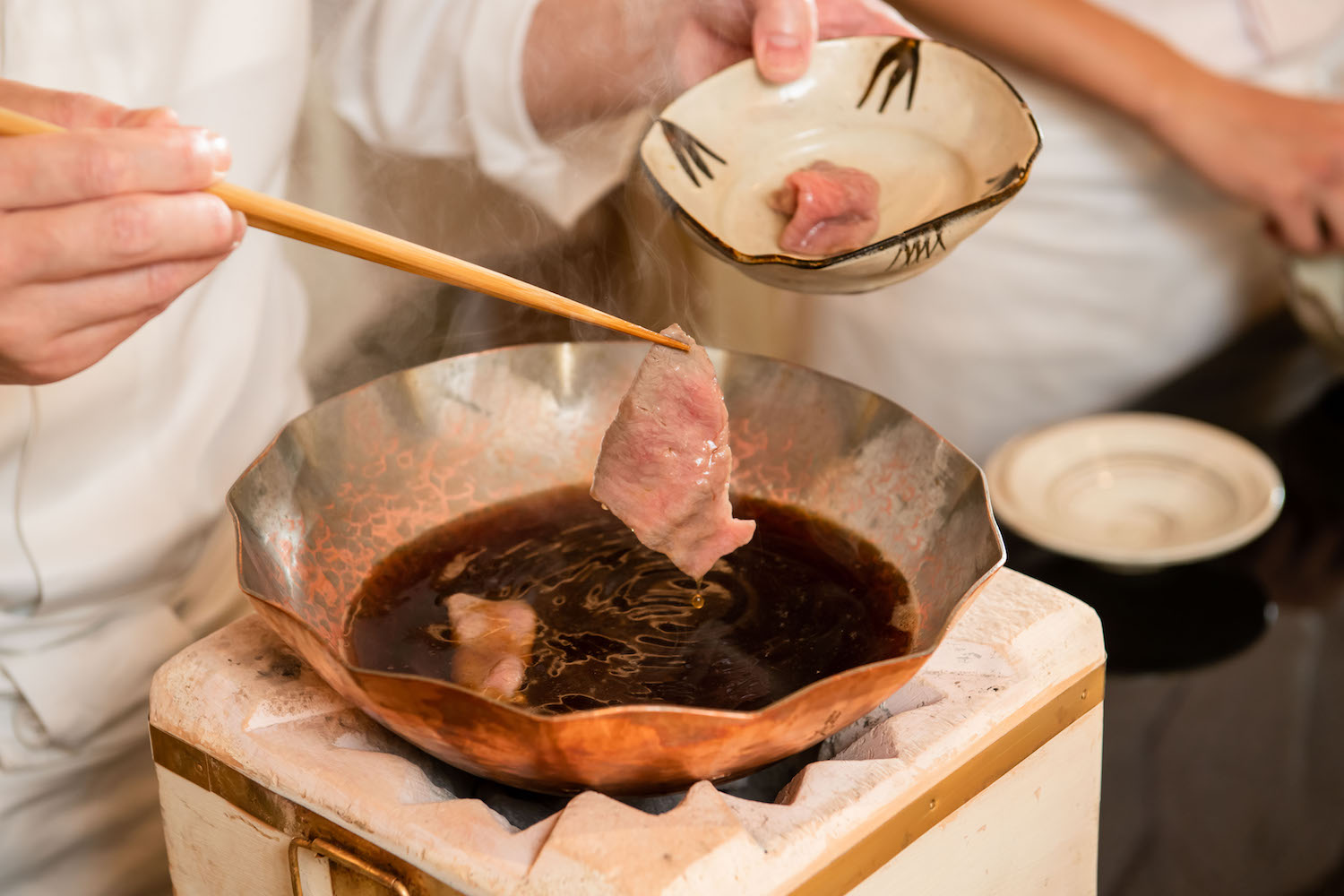 As the holidays approach, this month is all about feasting and enjoying a fantastic meal with family and friends. For that, you can look to our 10 new restaurant openings this month, from chef Ricardo Chaneton’s new venture at Mono to the highly anticipated arrival of Dominique Ansel’s pastry shop inside Harbour City.

After leaving his post at Restaurant Petrus, chef Ricardo Chaneton debuts Mono — a contemporary French fine diner — this month in partnership with JIA Group. Known for his former head chef stint at Mirazur, now the World’s #1 restaurant according to 50 Best, the South American-born chef will parlay his years of experience in acclaimed French restaurants around the world into an ingredients-driven seasonal tasting menu served within Mono’s intimate 30-seater space. Featuring traditional counter as well as an intimate dining room, Mono will also serve weekday lunch sets, while dinner will ditch the a la carte format for a single tasting menu paired with a wide selection of wines. Stay tuned here as we bring you our first impressions.

Slated to open this December, those with a sweet tooth are undoubtedly waiting in eater anticipation for Dominique Ansel’s Hong Kong debut — the world-renowned French pastry chef best known as the inventor of the cronut. His eponymous bakery in New York is beloved for whimsical creations from cookie shots to frozen s’mores, although Hong Kongers can expect something very different in this first overseas venture.

After teasing the opening back in March, the long-awaited pastry shop will open as Dang Wen Li (named after the chef’s ‘Chinese’ name), featuring a capsule collection specially created for and inspired by Hong Kong — with a number of exclusive desserts that take cues from the local cuisine, from fishballs to pineapple buns. With the sunshine yellow hoarding in Harbour City set to come down soon, you’ll want to scoot over to Kowloon for a first taste of Ansel’s creations.

After months of waiting, Kappo Rin finally opens to the public this winter, completing the trio of new restaurants on the 7th floor of the Landmark Mandarin Oriental. Nestled alongside three-Michelin-starred Sushi Shikon, and across the way from two-starred Amber, Kappo Rin — opened by the same group as Shikon — is a relaxed 8-seat tasting counter, offering a fresh, contemporary take on classic flavours and recipes. Left up to the chef in the style of omakase, the multi-course degustation unfolds in a series of artistic and seasonally-driven dishes, emphasising the pristine nature of Japanese ingredients with minimal preparation (the word ‘kappo’ means ‘to cut and to cook’).

The chefs will deploy a series of cooking methods to highlight the inherent flavours of ingredients from Japan’s land and sea, with highlights including Soba Noodles with Sea Urchin and Black Caviar, Grilled Wagyu Beef in Sukiyaki Style with Black Truffles, and Fried Prawn-shaped Taro in Mushroom Broth. An understated dining room reflects the beauty and elegance of Japan, accented by a few choice artworks and handcrafted furnishings. Kappo Rin’s 10-course menu is priced at HK$2,500 plus 10% surcharge.

Few know that San Sebastián, a beautiful resort town on the coast of Spain, is a global culinary capital known for having the most Michelin stars per square metre. From this gastronomic hub arrives Amelia, a Michelin-starred restaurant headed up by Executive Chef Paulo Airaudo. Working in tandem with local head chef Son Pham, the pair will present their innovative take on contemporary European cuisine imbued with Asian flavours, as Airaudo marks his Hong Kong debut. Expect an elegant yet relaxed setting in Harbour City with panoramic views of the harbour to complement Amelia’s stunning seasonally-driven fare.
Amelia, Shop OTG63, G/F, Ocean Terminal, Harbour City, Tsim Sha Tsui, Hong Kong

Signature dishes range from the Smoky Quartz skewers, starring a medley of mushrooms and crisp asparagus; to the Golden Flowers with cauliflower and braised mushroom in salted egg yolk. For a winter warmer, the hearty Lotus Leaf vegetable stew does the trick, steaming and aromatic. In addition to dine-in, Miss Lee also comprises a takeaway counter for grab-and-go options and fresh smoothies throughout the day.

With the boom in food delivery services, it should come as no surprise that Black Sheep Restaurants have opened their first digital-only restaurant. Offering a greatest hits list of beloved Indian takeaway dishes, Uncle Desi Food & Sons is overseen by chef Palash Mitra, who presides over the kitchens of one-Michelin-starred New Punjab Club and Rajasthan Rifles at The Peak.

Paying tribute to those who have emigrated from South Asia and brought their family recipes with them to new homes in the UK, States and beyond, Uncle Desi celebrates both home cooking and comfort food. Go-to dishes include golden-fried aloo samosa to chicken tikka masala; spicy prawn vindaloo and the lamb rogan josh teeming with fragrant spices. The restaurant is island-side-only for now, delivering from Kennedy Town to Tai Hang.

Order from the website here; Delivery for dinner daily from 6–10:30pm.

Food & Drink
Review: The tandoor is the star at New Punjab Club

With the cold weather finally here, now’s the time to be tucking into pumpkin lattes and fragrant spiced pies. For the latter, you’ll want to head over to James Sharman’s British-inspired The Leah, which has just unveiled its all-day cafe concept this month. Deemed Leah Cafe, the casual space offers a haven for famished diners to tuck into hearty comfort food ‘just like mum makes’, with an expanded selection of Asian-inspired pies (beef and sesame, and roast Sichuan chicken pie) available from breakfast through to happy hour.

Under the motto “British food done right”, Sharman continues to hone rich, wintry flavours rooted in honest ingredients, and his pies have already proven to be signature crowdpleasers. Leah Cafe also helps diners kickstart the day with a hearty breakfast selection including fresh pastries, while afternoon offers sweet pick-me-ups such as rose chiffon cake and marshmallow cheesecake paired with organic coffee and tea.

A tranquil oasis in the heart of bustling Causeway Bay, Kura is a new modern Japanese restaurant vying to stand out from the crowd, with fresh seafood flown in daily from the fish markets of Tokyo, Kyushu and Hokkaido. Adding a riff to classic recipes, head chef KC administers a bit of artistic flair to his omakase experience (HK$1,180–1,680), whether it’s the seared fatty tuna, steamed abalone with liver sauce, or assorted tempura with Japanese Kuruma prawns and four types of seasonal vegetables.

Bright decor balks the tradition of the Japanese minimalist sushi counter, with Kura’s dining room awash in colour from cerulean blue sofas to splashes of artwork on the walls. For those seeking a quick power lunch, Kura offers 13 lunch sets (starting from HK$260) ranging from Japanese uni with American lobster to the premium sashimi platter paired with miso soup and dessert. Guests can also expect a well-curated sake menu from Kura’s in-house sommelier.

Craving a platter of finger-lickin’ wings? Aimed toward millennials with upbeat music and cosy vibes, Wings promises to be the neighbourhood spot for friends to kick back with a pitcher of beer and bar food, with an array of internationally-flavoured wings priced at just HK$35, and a daily happy hour. Over 12 types of wings draw inspiration from around the globe: tuck into the Hong Kong-style Shelter Bay Wings, or the Taiwanese Salt and Pepper Wings (pictured above) scattered with deep-fried fresh basil in the style of the ubiquitous street snack.

Hailing from Canada are the honey garlic wings flavoured with ginger and garlic, while the British version is a holiday-inspired recipe with pumpkin puree and brown sugar. If you can handle the spice, the Devil the Thirteen Wing promises to have you grabbing for the nearest glass of water.

Beloved neighbourhood spot Aziza has expanded to a second location in Sai Ying Pun, serving its unique brand of home-style Egyptian cuisine crafted lovingly by chef Mohsen Gaber Ibrahim. He’s bringing the vibrant flavours of his homeland to Sai Ying Pun’s eclectic neighbourhood, set in a cosy dining room complete with lofty ceilings and colourful murals. On the menu, you’ll find excellent versions of classics such as hummus and falafel, all expertly prepared according to family recipes and blooming with fragrant herbs. Don’t miss the homemade cous-cous, slow-simmered for two hours, and over a dozen varieties of soul-warming tagines.

New Restaurants Dining Restaurants Hong Kong Dining new openings Dominique Ansel mono Hong Kong Museum of Art F11 Foto Museum
Leslie Yeh
Editor in Chief
Having worked as a lifestyle editor for almost 10 years, Leslie is thrilled to be writing about the topic she loves most: wining and dining. When she's not out pounding the pavement for the latest new restaurant opening or tracking food trends, Leslie can be found at home whipping up a plate of rigatoni vodka and binge-watching Netflix with a glass of Sauvignon Blanc in hand.
Dining Restaurants Food Trends Drinks Travel