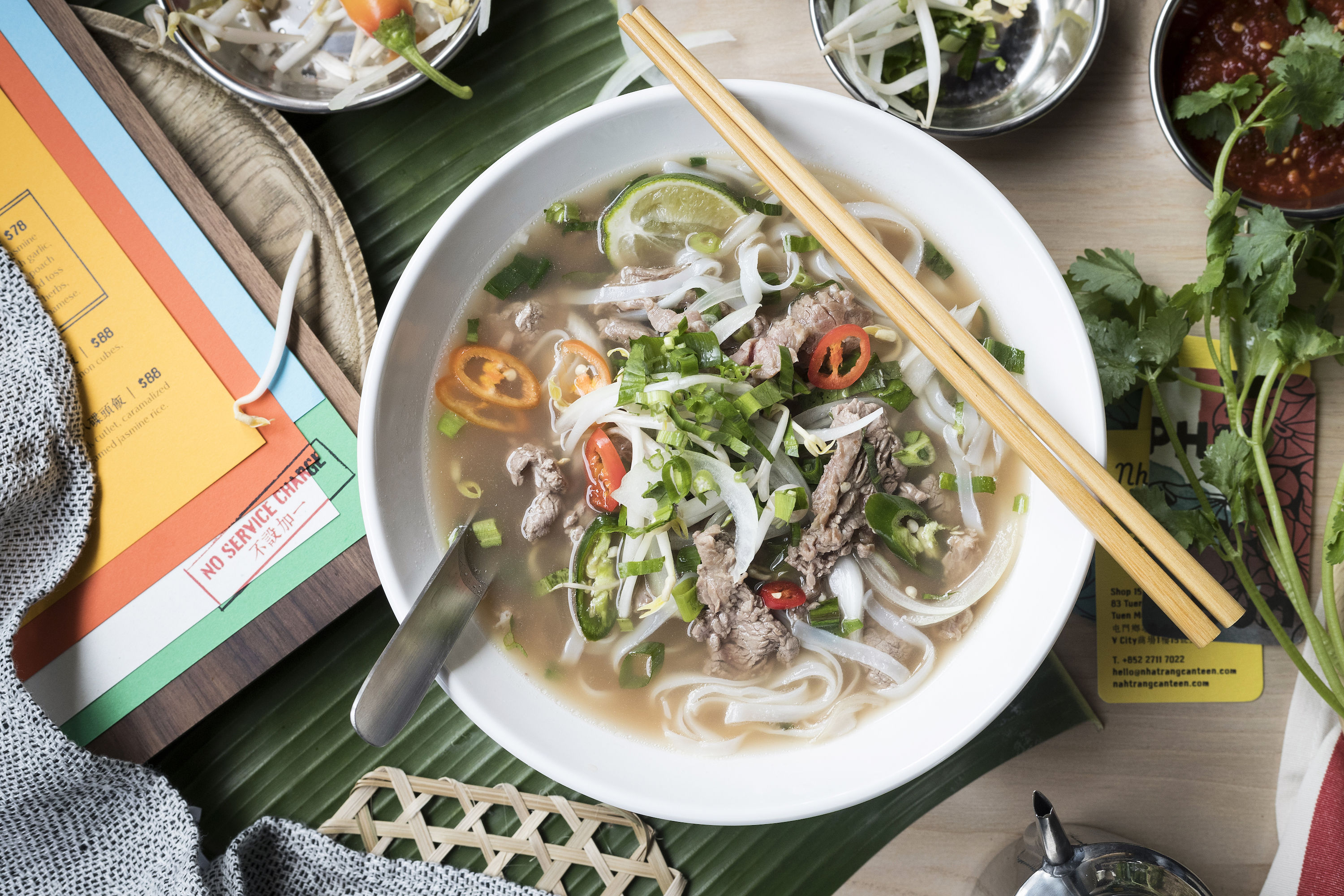 January is traditionally known as a month for diets and healthy new year’s resolutions, but that doesn’t mean you can’t still enjoy all that Hong Kong’s dining scene has to offer. (Our motto is everything in moderation this month). Take a few days off to reset your mind and body after the heavy holiday feasting period, then get back in the groove of your regular exercise routine and work up an appetite for these brand new restaurants offering everything from Vietnamese street snacks to Peking duck.

The group behind casual Vietnamese eatery Nha Trang and its trendy spin-off, Bêp, is at it again with a recently opened sister concept which seems distinctly aimed at the food-obsessed millennial crowd. Debuting in the New Territories with more outlets planned, Nha Trang Canteen offers some of the same items as its older sibling (notably, the pho recipe remains consistent across all venues), in addition to a new menu of street food-inspired snacks including satay skewers, Hoi An chicken rice, shrimp paste grilled on sugarcane, lemongrass chicken wings and the signature bun cha, or grilled pork patties with rice vermicelli. The contemporary eatery is decked out in vibrant shades of turquoise blue and orange, with a neon street sign reading “Pho. Com. Bun.” — you know, just in case you need a menu refresher.

Following the closing of Tapagria and Zurriola in The One last year, lo and behold, another Spanish restaurant has cropped up to (hopefully) reinvigorate the tapas scene in TST, this time conceived in the style of a traditional asador grill house. Alzina Spanish Asador will serve up the usual array of Spanish cold cuts, tapas, paella and suckling pig, including some more unusual Catalan ingredients such as goose barnacles and smoked Idiazabal, a type of cured sheep’s milk cheese. For the most part, the menu is on par with other Spanish joints in town — think crispy croquettes, spicy chorizo and seafood paella — so we’ll be keeping a close eye on whether their execution can maintain the high standard set by other Spanish heavy-hitters such as Ham & Sherry, Catalunya and La Paloma.

The latest fine dining Chinese restaurant to hit Central isn’t going to be winning any awards for creativity in the name department — “The Chin’s” is short for The Chinese) — but what it lacks there, we hope it makes up for in the kitchen. The newcomer is led by executive chef Ringo Chow, a 30-year veteran of the industry whose focus on fundamental Chinese techniques and traditional ingredients will be present throughout the menu, particularly in the use of the “Chinese Four Treasures” — abalone, sea cucumber, shark’s fin and fish maw. The menu will hop around China to present different takes on provincial dishes, with a “modern twist” catering to today’s gourmands. Expect fancy food in an even fancier setting, with velvet high-backed chairs, marble and brass detailing, and five private rooms for intimate gatherings.

After the raging success of Italian eatery Pirata and Spanish asador grill house The Optimist, power duo Manuel Palacio and Christian Talpo are set to open two brand new venues, the first debuting this month and the second to follow in February. Officially opening in mid-January, TokyoLima is a late-night bar and restaurant dishing up Nikkei (Japanese-Peruvian) cuisine in a casual environment with the vibes of a buzzing izakaya. This niche cuisine was introduced to Hong Kong a few years back by El Mercado in Wan Chai, and we’ll be excited to see how TokyoLima stacks up. Built to capture the atmosphere of Japan’s famous drinking hangouts, TokyoLima will offer an extensive sake menu and cocktails to be enjoyed on a terracotta-tiled bar, in addition to an open kitchen headed up by Peruvian chef Arturo Melendez.

Kurogi and Umai Sushikan
With the recent influx of Tsukiji Market imports coming to Hong Kong (there’s the Tsukiji Yamataka Seafood Market and Toyosu Suisan, both in Wan Chai), it’s no surprise that the latest one has opened up at the other side of the harbour, catering to the throngs of shoppers in Harbour City looking for a seafood meal to break up their shopping sprees. Soft-opened last month, Kurogi and Umai Sushikan is led by chefs who spent two months training at the flagship branch in Tokyo (there are now 31 shops across Japan). The Hong Kong iteration serves up premium, jet-fresh fish from Japan in a number of donburi bowls and sushi and sashimi platters. We recommend going for the 10-piece assorted sushi set (HK$300) which changes daily based on what’s fresh at the market.
Kurogi and Umai Sushikan, Shop G04, Ocean Terminal, Harbour City, 3-27 Canton Road, Tsim Sha Tsui, Hong Kong, +852 2115 9956

We were amongst the first to try Pacific Place’s American brasserie Bizou when it opened a few weeks ago, and were impressed by the diversity of dishes and clear vision of chef Magnus Hansson to extract maximum flavour from simple, healthy ingredients. You’ll find a selection of creative salads such as kale caesar and roasted beets with avocado, Middle Eastern-inspired dips and sauces, homemade bread, organic meats and vegetables, and even a few Scandinavian touches here and there. While not distinctly “American”, the casual bistro draws on influences from around the world as a nod to American’s diverse culinary scene. The result is a casual and convenient spot to grab a tasty, filling meal that won’t leave you uncomfortably full — we expect this one to become a popular lunchtime option for the area’s office crowd.

Singapore-based restaurant group Imperial Treasure is setting its sights on Hong Kong next after nabbing two Michelin stars for its eponymous restaurant. Imperial Treasure Fine Chinese Cuisine is set to open in Hong Kong later this month, housed in One Peking in TST to provide soaring views of the harbour in addition to Michelin-worthy Chinese food. A spacious setting will reflect the opulence of traditional fine dining Chinese restaurants, with the menu serving signature Cantonese favourites including the restaurant’s signature perfectly roasted Peking duck.

One of Central’s favourite grab ‘n’ go lobster roll shops has expanded to a second outlet on Tang Lung Street, offering its standard menu of shrimp, crab and lobster rolls, in addition to a few new items to entice the curious Causeway Bay crowds. The Double Lobster Roll (HK$270) will appeal to loyal Lobster Central fans, offering the same simple, classic formula of butter-dressed lobster meat in a split-top grilled bun — but with double the amount of lobster meat. Diners with a hankering for something a little more unconventional can opt for the Emperor Roll (HK$168), with freshly buttered lobster sitting in a roll lined with crisp nori sheets, dressed with uni, furikake and mentaiko roe. Finally, the loaded lobster fries (HK$178 full, $95 half) are set to give Hong Kong’s other gourmet fries a run for their money — topped with steamed Boston lobster, cheddar cheese sauce, truffle dressing and a sprinkling of paprika.

Looking for your doughnut and caffeine fix? Indonesian import J.CO Donuts & Coffee has just opened on Hennessy Road in Wan Chai, serving up delicious, carb-loaded treats sprinkled with everything from strawberries and cream cheese to white chocolate and toasted almonds. The fluffy doughnuts pair perfectly with a steaming cup of J.CO’s full-bodied coffee blend made from 100% Arabica coffee beans, in addition to more creative concoctions such as the Hot Tiramisu and the Cappuccino Chip Frappe. With more than 250 outlets worldwide, we hope J.CO can fill our doughnut hole (pun intended) in Hong Kong.

New Restaurants Dining Restaurants Lobster Central new openings bizou nha trang canteen imperial treasure the chin's alzina spanish asador TokyoLima Kurogi and Umai Sushikan Halcyon J.CO Donuts & Coffee
Leslie Yeh
Editor in Chief
Having worked as a lifestyle editor for almost 10 years, Leslie is thrilled to be writing about the topic she loves most: wining and dining. When she's not out pounding the pavement for the latest new restaurant opening or tracking food trends, Leslie can be found at home whipping up a plate of rigatoni vodka and binge-watching Netflix with a glass of Sauvignon Blanc in hand.
Dining Restaurants Food Trends Drinks Travel
Sign up for our newsletters to have the latest stories delivered straight to your inbox every week.