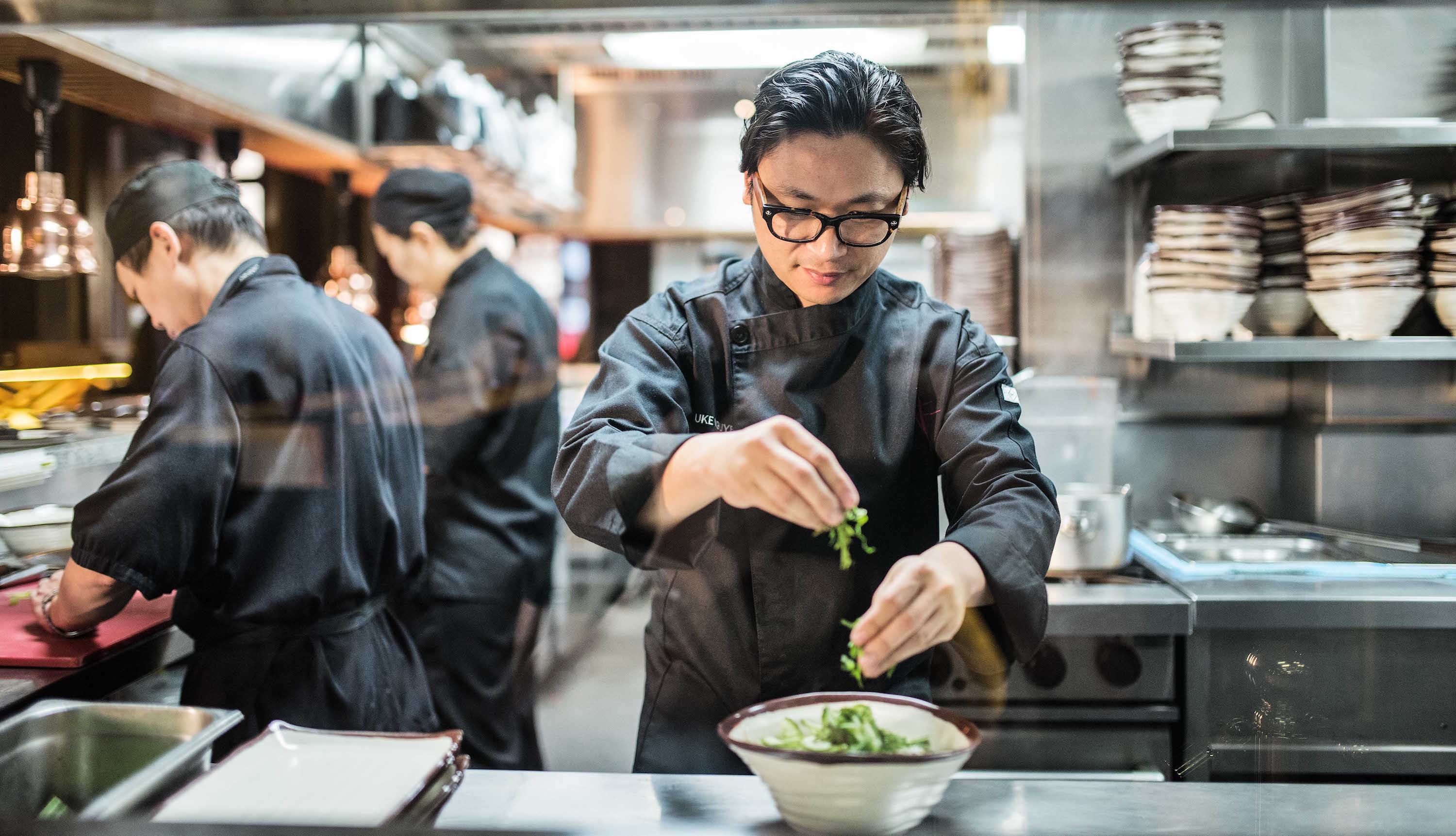 Thanksgiving and Christmas festivities are inching closer, but before you decide to go on a pre-holidays diet, fair warning: Hong Kong’s dining scene is heating up this month with new restaurants you won’t want to miss (there’s always New Year’s resolutions, right?). From a Vietnamese street food joint to modern Scandinavian cuisine and a refreshing Californian breeze hitting our shores, we take a look at the best tables to tuck into before the holiday season hits.

We announced in September that Nordic chef Björn Frantzén would open a sister venue of his renowned Stockholm eatery, Restaurant Frantzén, in Sheung Wan, and it looks like the silverware’s undergoing its final polish. Hoping to revive the Nordic dining scene here (following the sudden shuttering of NUR), Frantzén’s Kitchen certainly boasts the pedigree to succeed (Restaurant Frantzén has two Michelin stars and has occupied the #31 spot on The World’s 50 Best Restaurants list).

However, Hong Kong has yet to prove its appetite for New Nordic cuisine despite its popularity around the world. Hoping to change that is head chef Jïm Löfdahl (previously manning the pass at the Stockholm flagship), who will present an evolving menu that incorporates local ingredients for an Asian twist on modern Scandinavian food. It’s hard not to be intrigued, and we’ll be one of the first in line when the bistro opens in mid-November.

Premium cocktails and sustainable seafood bites are on the menu at the newly launched Mirage Bar & Restaurant in the lobby lounge of Renaissance Hong Kong Harbour View Hotel. Aside from floor-to-ceiling windows overlooking Victoria Harbour, the all-day dining venue boasts a 25-foot-high island bar as its focal point, where diners can bookend dinner with creative tipples such as the Lost in Translation, a twist on a whisky sour made with bacon fat-washed bourbon, citrus and spices. Highlights on the eco-conscious menu include smoked raw sustainable salmon with sour cream, dill and shallots; and Galician octopus with paprika and potato foam.

When it comes to light and ultra-fresh produce, California can’t be beat. It’s hard to imagine recreating that just-plucked, sun-kissed feel of Californian cuisine here in Hong Kong — where more than 90% of our produce is imported — but if anyone can make it happen, it’d be Yenn Wong of the prolific JIA Group (Chachawan, Rhoda, Fish School, etc.). Parked on the podium level of Pacific Place, Commissary dishes up light and bright West Coast cuisine, executed by culinary director Morgan McGlone and head chef Adam Shoebridge. Prepare to tuck into Baja fish tacos, kingfish crudo, tuna poke tostada, sea bass and smoked lamb ribs with house BBQ sauce, all washed down with a list of premium cocktails. Commissary opens tentatively on November 14.

Another Hong Kong restaurateur tugs at our heartstrings with a restaurant dedicated to Mom — this time it’s a Lebanese spot by Catch owner Alex Malouf, whose family ties burrow deep into Middle Eastern cuisine (his uncle is Aussie celebrity chef Greg Malouf, a recognized master of Middle Eastern cuisine). Hong Kong could do with more Lebanese eateries, and the newly opened Mama Malouf is already creating a buzz with its moreish dips, fresh mezze platters, and requisite fluffy pita bread. If you’re stuck in a food rut, this is the place to head in November to revive your palate.

After the successful opening of its deli and gourmet food shop one year ago on Gage Street in Central, the brains behind Feather & Bone have recently soft-opened another space in Happy Valley, this time incorporating a casual dining space for customers to enjoy the full range of their premium produce on-site. Designed by HK-based designers Charlie & Rose, the space combines dark green-tiled walls and pristine countertops for a comfortable, food court-style feel, with a 26-seat eatery serving up made-to-order meals from 7am to 10pm daily. The French-style delicatessen is stocked with French hams, foie gras, cured meats and charcuterie; you can choose from the cooked section, or pick out your favourite raw cut of meat and have it grilled  on the spot, to enjoy on their al fresco terrace with a cheese platter and glass of vino.

Two-Michelin-starred chef Enrico Bartolini is set to launch his first restaurant in Hong Kong towards the end of the month, an Italian spot named Spiga. The celebrated Tuscan native has previously consulted on Venetian restaurant Sepa, but this will be his first standalone restaurant outside of Italy, where he’s known for eateries in Milan, Bergamo and Castiglione della Pescaia. Focusing on cuisine from the Lombardy and Piedmont regions in northeastern Italy, Spiga will serve classics such as osso buco and vitello tonnato, with a vintage 1950s Italy-inspired interior brought to life by celebrated designer Joyce Wang.

After moving from Tin Hau to Wan Chai Road a few years back, Old Bazaar Kitchen by Lai Sun Group is uprooting yet again to a new space on Wan Chai’s Cross Lane – a modern and expansive eatery that caters to comfort in a way neither of the previous iterations did, while presenting new lunch and dinner menus. Chef Billy Chung remains at the helm, so expect the same melting pot of various Asian cuisines, with noodle and rice dishes dominating the lunch menu, and dinner focusing on more family-style options such as Chiu Chow-style Malaysian bak kut teh (HK$388, serves four) and salt-baked lamb rack (HK$398). Custom-tailored menus are also available on request for the private dining rooms.

There are restaurants that cater to general preferences and the mass palate – and then there are restaurants (or rather private kitchens) such as J House Academy. Dining here is an experience, and you may encounter several unfamiliar dishes and ingredients, perhaps even one or two that you dislike, but that’s all part of the experimentation process and novelty factor at nutritionist-turned-chef Justin Chan’s private kitchen. A noteworthy addition to the growing food scene in Tai Hang, chef Chan’s menu focuses on rare ingredients, minimally dressed and presented without fuss to let the natural flavours shine. Recently the nine-course degustation (HK$1,000 per person) featured thumb-sized mini watermelons, monkfish liver and goose barnacles, but a constantly changing menu means you’re guaranteed a surprise at each visit.

Bearing a somewhat un-PC Cantonese name (which translates more appropriately to ‘Lee’s Delicious Food’ in English), Lee Lo Mei by ZS Hospitality Group is the latest dining destination to open at 8 Lyndhurst Terrace, the space that was previously designated for four F&B concepts by controversial chef Harlan Goldstein. The first three are now open (Ee Da Le, My Tai Tai and Mamasita’s Cantina), Goldstein is out (not a great shock to many in the industry), and the first two floors have been completely re-conceptualised from what would have been a casual all-day restaurant and lounge into a Hong-Kong-street-food-and-cocktail establishment. Helming the kitchen at Lee Lo Mei are director of culinary operations Joe Lee and executive chef Max Lee (are you starting to see the pattern here?), who will pay homage to Hong Kong’s nostalgic culinary traditions with a few modern tweaks. A team of all-star bartenders will be shaking up some creative cocktails at the bar, setting the stage for the ideal after-work spot to chill out and enjoy Hong Kong-style snacks.

Dining Eat Restaurants Frantzén's Kitchen Commissary Spiga Moi Moi by Luke Nguyen Feather & Bone Mama Malouf Mirage J House Academy Old Bazaar Kitchen
Leslie Yeh
Editor in Chief
Having worked as a lifestyle editor for almost 10 years, Leslie is thrilled to be writing about the topic she loves most: wining and dining. When she's not out pounding the pavement for the latest new restaurant opening or tracking food trends, Leslie can be found at home whipping up a plate of rigatoni vodka and binge-watching Netflix with a glass of Sauvignon Blanc in hand.
Dining Restaurants Food Trends Drinks Travel
Sign up for our newsletters to have the latest stories delivered straight to your inbox every week.