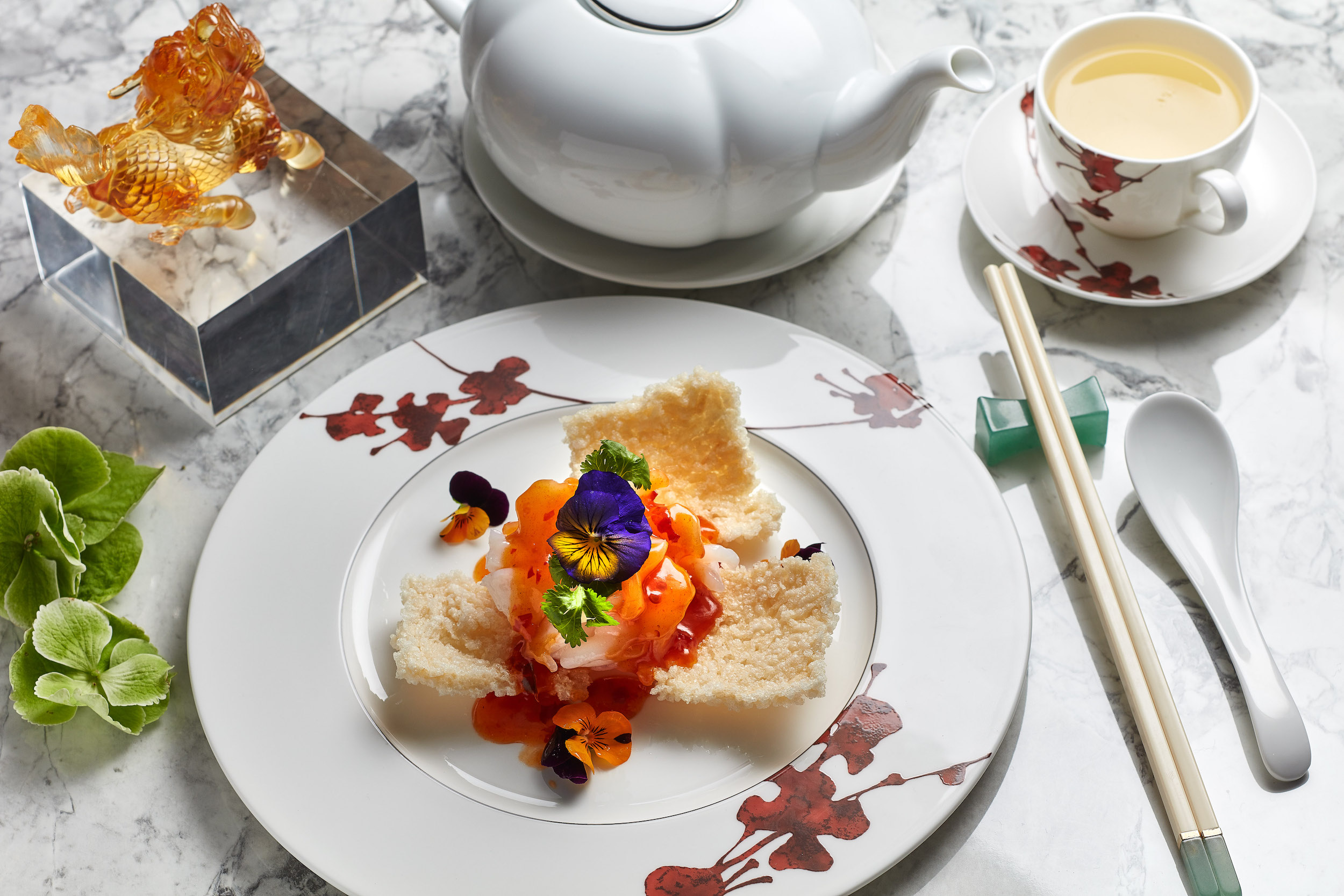 September is a month of new beginnings: students are settling in to a new school year, the heat is starting to die down (along with the typhoons, we hope), and life becomes more of a routine after a string of lazy summer days. It’s also the perfect time of year for restaurateurs to kick off a new project — as evidenced by the myriad dining options we’re seeing open up around town. With some of the city’s big F&B players launching splashy new ventures while independent restaurateurs and chef-owners make their debut, this month is shaping up to look like a treat for all food lovers. From classic Cantonese to Italian seaside dining to Southeast Asian street food, here’s where to fill up your plate in September. 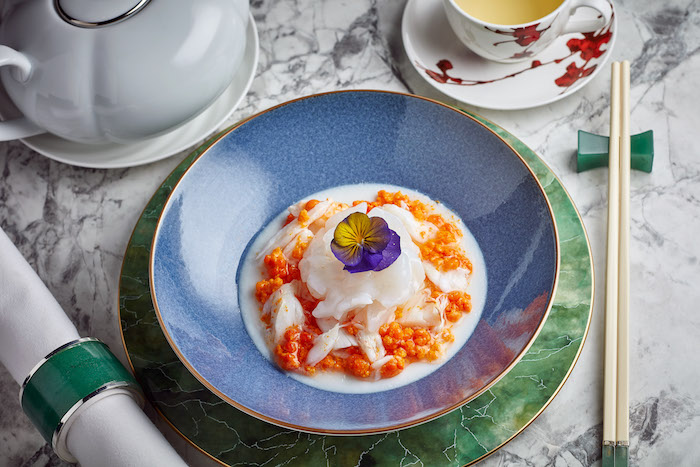 Located in the same building as celeb chef-powered Vietnamese eatery Moi Moi by Luke Nguyen, ZS Hospitality has unveiled a glitzy new Chinese restaurant with another culinary star at its helm. Led by chef Siu Hin Chi, who previously headed up the kitchens at three-Michelin-starred T’ang Court and most recently, at two-Michelin-starred Duddell’s, Ying Jee Club is a sophisticated addition to the group’s arsenal of more casual eateries, boasting classic Chinoiserie décor with cushy banquette seating against a backdrop of emerald green and gold. The restaurant seats a total of 104 guests, with a grand dining hall, semi-private and private rooms.

Stop by to sample Cantonese specialties such as sautéed garoupa with Chinese kale and golden-fried fish head, stir-fried sliced lobster with spring onion, and pan-fried crab claw filled with shrimp paste and caviar. An eclectic and lengthy wine list features over 300 pours from around the world, making Ying Jee Club a worthy new contender for destination dining amongst Central’s high-end Chinese establishments. 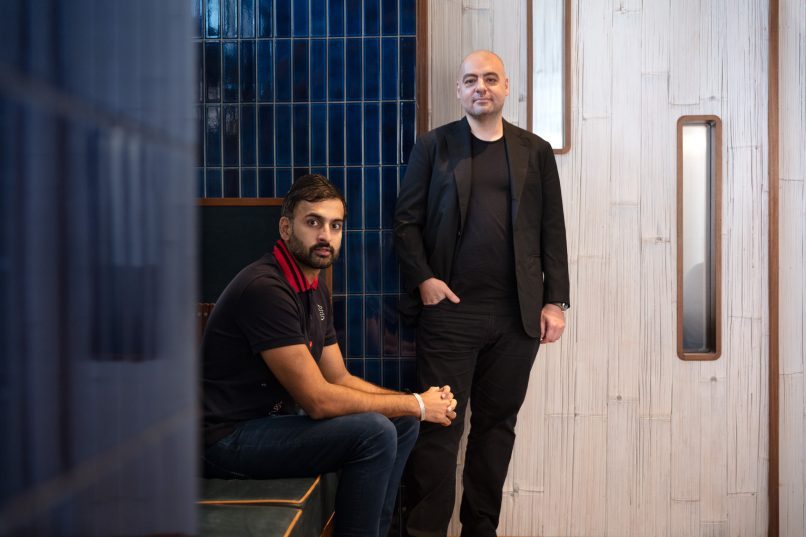 It’s a busy month for Black Sheep Restaurants as they debut their 16th restaurant, hot on the heels of New Punjab Club. The Italian restaurant Osteria Marzia is an ode to Italy’s coastline, focusing on the diverse and bountiful produce found in the scenic seaside regions of northern and southern Italy (the concept was inspired by summer road trips taken by founders Christopher Mark and Syed Asim Hussain). Helmed by head chef Luca Marinelli, who arrives from BSR’s Argentinian steakhouse Buenos Aires Polo Club, the sea-inspired restaurant will serve an array of raw crudos, fresh salads, homemade pastas and grilled meats and seafood. Interiors, meanwhile, are meant to transport you straight to an Italian seaside holiday with blue banquettes, a blue-tiled bar and hand-painted Positano ceramics evoking the feel of sunny summer days off the coast of Italy. 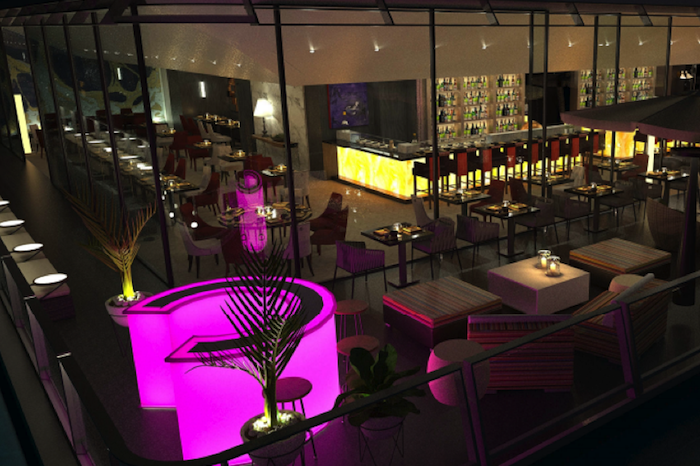 Ana Ten is the newest venue from LUBUDS F&B Group, who operate a number of mid-market Japanese and Vietnamese eateries around town. However, what differentiates Ana Ten is the stunning view, for one: Located in the new waterfront extension of Ocean Terminal in Harbour City, the restaurant boasts full panoramic vistas of Victoria Harbour from a spacious outdoor terrace. Then there’s the wide-ranging menu, which seems to cycle through all manners and styles of Japanese cooking: there’s sushi, sashimi, donburi, yakimono, tempura, agemono, robatayaki and teppanyaki.

On the drinks side, Ana Ten will stock a wide selection of wines, sakes and Japanese-style craft cocktails inspired by Japanese folklore. The spacious dining area is broken up into a large open kitchen and bar, main dining room, teppanyaki counter and outdoor terrace, allowing guests to tailor their experience for a memorable night out on the town. 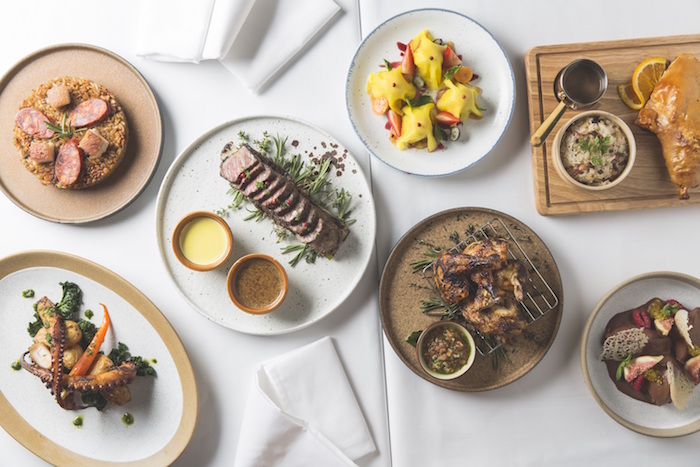 After moving out of its old home in LKF Tower, the new Casa Lisboa — led by Portuguese-born chef Fábio Pombo — has officially reopened down the road on Wyndham Street, serving a spruced-up menu of refined Portuguese dishes. Those who frequented the long-standing Central eatery will hardly recognise the new digs — in place of the antiquated red suede seats and wine cellar décor is a bright and clean blue-and-white space with a distinct maritime theme.

While perennial favourites remain including slow-roasted suckling pig and saucy duck rice, guests will find some new numbers to entice such as Portuguese oyster confit infused with Moscatel wine, piri-piri quail smoked with rosemary, and succulent Algarve red prawns doused in a Portuguese-style sauce. The drinks list has also been expanded to include a number of Portuguese-style cocktails, in addition to the established list of red, white, green, port and sparkling wines. 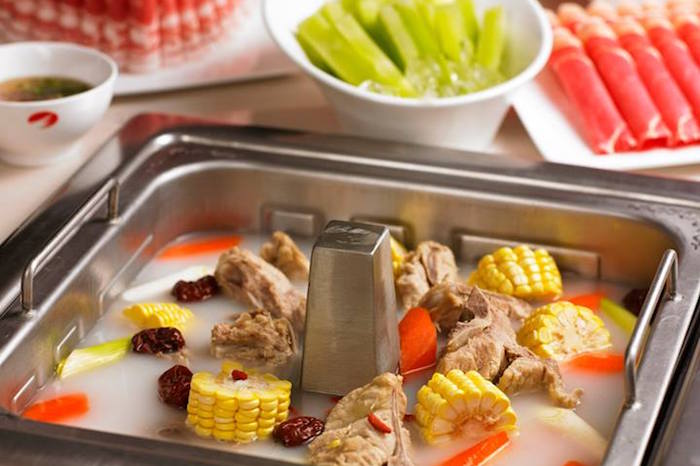 Reports floated earlier this year that China’s ubiquitous hot pot chain, Hai Di Lao, was making its way to Hong Kong, and after an extended period of renovations at the Mongkok site, it seems the doors are finally set to spring open this month. Loved for its affordable price point and dinner theatre complete with noodle-pulling shows and dance performances, Hai Di Lao hopes to follow in the footsteps of other mainland hot pot brands that have crossed over successfully to Hong Kong including Little Sheep and Xiao Yu Hotpot Restaurant. An added bonus? The Hong Kong branch will open 24/7 to satisfy late-night hot pot cravings.

We’re big fans of Hai Di Lao already and are crossing our fingers the Hong Kong flagship can deliver without the added inconvenience of inflated prices or horrendous queues (fortunately, the restaurant is also bringing over its winning concept of providing free manicures, shoe shines and raffles while patrons wait for a table). As for the food, you’ll be able to choose from a long list of different soup bases including mushroom, tomato, seafood, laksa and spicy Sichuan with a range of delicious DIY dipping sauces for the premium meats and seafood. And the best part is always reserved for last — the house-pulled noodles which are flipped and twirled in front of you in a riveting table-side performance before being served as your final mouthwatering course. 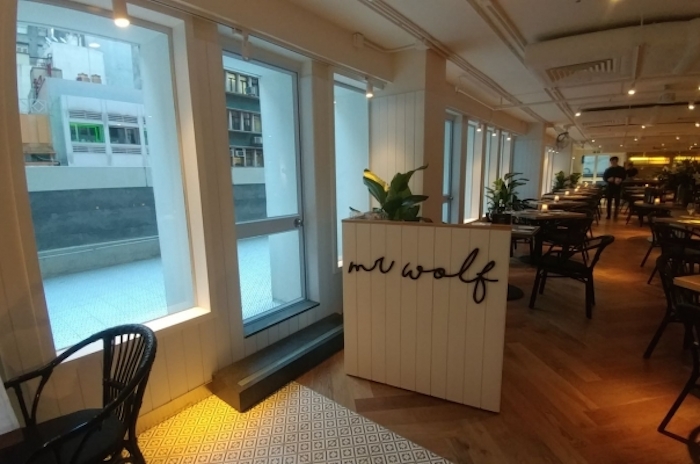 Castelo Concepts‘ latest restaurant, Mr. Wolf, has recently opened in Central, aiming to be an upmarket brasserie with a menu that’s slightly more sophisticated than its other rather formulaic restaurants such as Jaspas, Wagyu and Zak’s. The menu looks promising from a first glance — starters range from steak tartare to soft shell crab with gochujang mayo, while fresh pastas include duck ragu pappardelle and pea risotto. Meanwhile, mains run the gamut from a Middle Eastern-style lamb rump with smoked eggplant to crackling pork belly, beef and seafood pies, and a hearty selection of steaks.

Of course, in typical Castelo fashion the menu doesn’t stops there — there’s a whole page dedicated to breakfast dishes (yes, there’s avo on toast), a “Deck Menu” with bar bites served from 3-11pm every day, and a handful of promotions and happy hours already in the works, from Wellington Wednesdays to Friday free-flow long lunches priced at HK$500 per person. The dimly lit dining room is classily outfitted with floral centrepieces, dark-patterned sofas and whitewashed walls — making this one Castelo Concepts restaurant we may even consider hitting on our next date night. 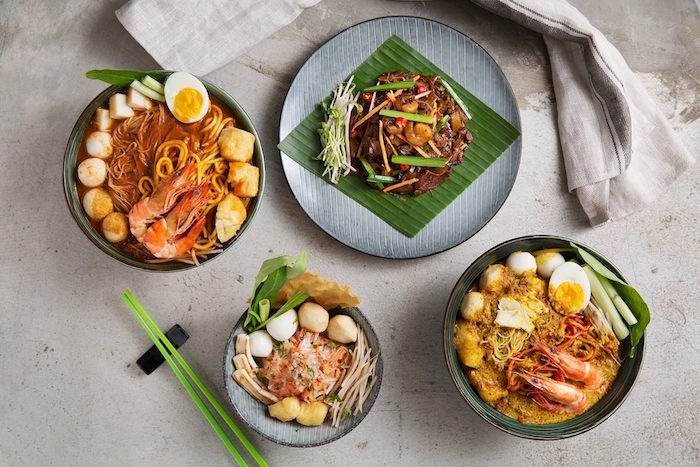 A hip new eatery has landed on Wing Lok Street, serving up the bold and punchy flavours of Southeast Asia. In case the name didn’t give it away, it’s all about the noodles here, with different specialty bowls ladled up by Malaysian native and head chef Kevin Lim. Try the funky Nyonya Laksa with its murky, spice-ridden broth swimming with prawns, fish balls, beancurd and more; or the Thai Yen Ta Fo Heng, “pink noodles” that get their signature hue from a fermented tofu sauce before being topped with fresh shrimp, fish balls, tofu puffs and bean sprouts. Other dishes such as char kway teow and a range of fried snacks are perfect for a quick and easy fix to lunchtime cravings. Local Sheung Wan office workers still grieving the shuttering of noodle fave DanDan earlier this year may want to hop over to Mean Noodles and give it a try. 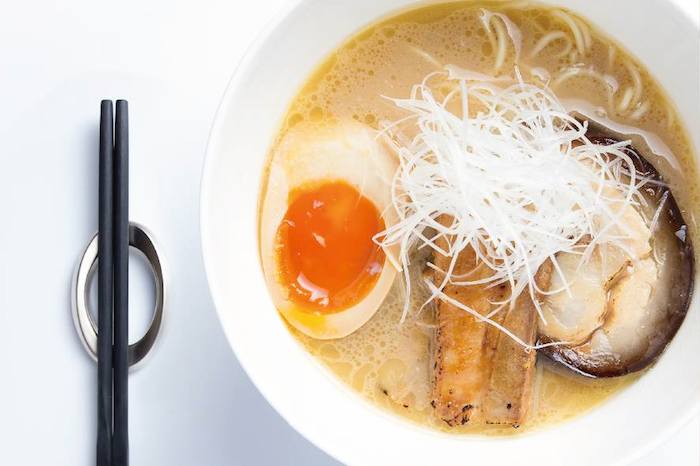 From one Asian noodle bowl to the next — newcomer Fuse Creations is jumping on the ramen train with its centrally located noodle bar on the bustling Elgin Street. The small but sleek space churns out four different types of ramen: the classic Fuse Ramen with a shoyu pork bone broth, Spicy Ramen amped up with black garlic oil and chilli oil, Cream of Chicken Ramen with a thick chicken broth infused with leek and onion, and the Tomato Basil Mazeman, an East-meets-West blend of tomato sauce, infused oils and Parmigiano-Reggiano. The special motodare (soy sauce and soy bean paste flavouring agent that serves as the base for ramen broth) is made in-house, complemented by a slow-simmered broth, springy noodles, chargrilled meat and a perfectly runny egg. Other fusion-leaning items to feed your appetite include smoked chicken wings with house tare, chicken and leek mashed potatoes with crispy wonton skin, and Japanese melon paired with 48-month jamon iberico. 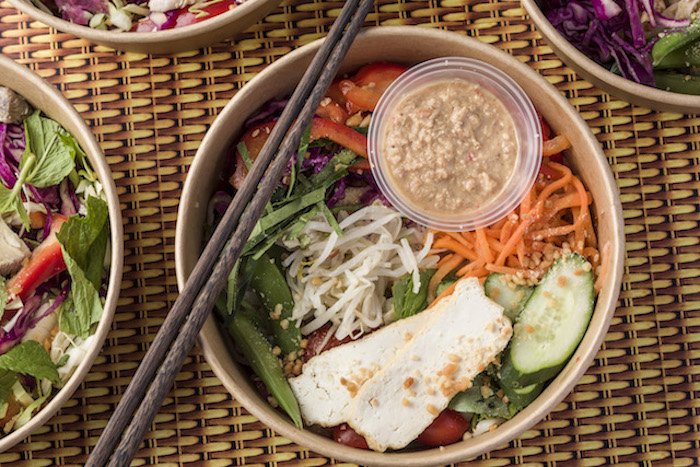 For those who have a soft spot for the hawker food centres around Southeast Asia, you’ll want to scoot down to this new spot opened in Quarry Bay. Founded by Mina Park of private Korean kitchen Sook, the contemporary grab ‘n’ go concept Hawkr is all about delivering the fresh and authentic flavours of Southeast Asian street food in a neat takeaway package, from curries to soup noodles to healthy breakfasts and more. The project is a collaboration with founder of Myanmar-based lifestyle concept Pun+Projects, Ivan Pun, and private equity professional Jake Astor, and aims to serve the swarm of young professionals and busy office workers in the area.

If you don’t work in Quarry Bay, Hawkr is still worth the trek with its completely MSG- and preservative-free menu of healthy and flavour-packed dishes. Lunch options include Vietnamese chicken cabbage salad (HK$52), peanut noodles (HK$52), Javanese beef rendang (HK$68), Thai papaya salad (HK$24) and Thai-style chicken and lemongrass soup (HK$35). Meanwhile, a range of organic noodle soup pots can be taken to go and prepared back at the office simply by adding hot water, like instant noodles. For a sweet ending, dessert options include coconut panna cotta and chia seed pudding. 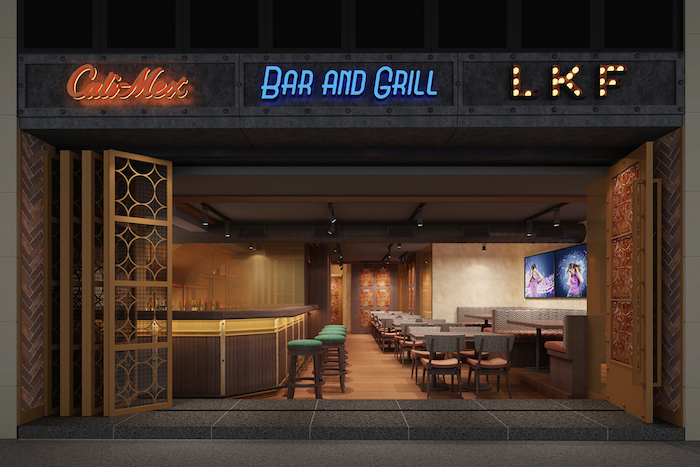 Cali-Mex has been running the Mexican fast-food game since competitor Little Burro closed its mom ‘n’ pop shops on the island, and now they’re looking to go bigger and bolder with the launch of the Cali-Mex Bar & Grill Flagship in Central this month. While Cali-Mex’s sit-down Bar & Grill concepts can already be found around waterfront locations such as Sai Kung, Stanley and Discovery Bay, the Central flagship will be the first “premium city restaurant” with an upgraded look and a sports bar-like vibe ready to cater to the Lan Kwai Fong crowd.

The look will feature dark timber flooring, copper finishes and sharing booths, while the menu includes an extended selection of grilled meats and seafood such as sizzling garlic prawns and baby back ribs, in addition to the signature tacos and quesadillas. What’s more, three 65-inch screens will cater to all the sports enthusiasts, with the taqueria-slash-grillhouse serving food and drinks well into the early hours of the night.

Where to get the best French toast in Hong Kong