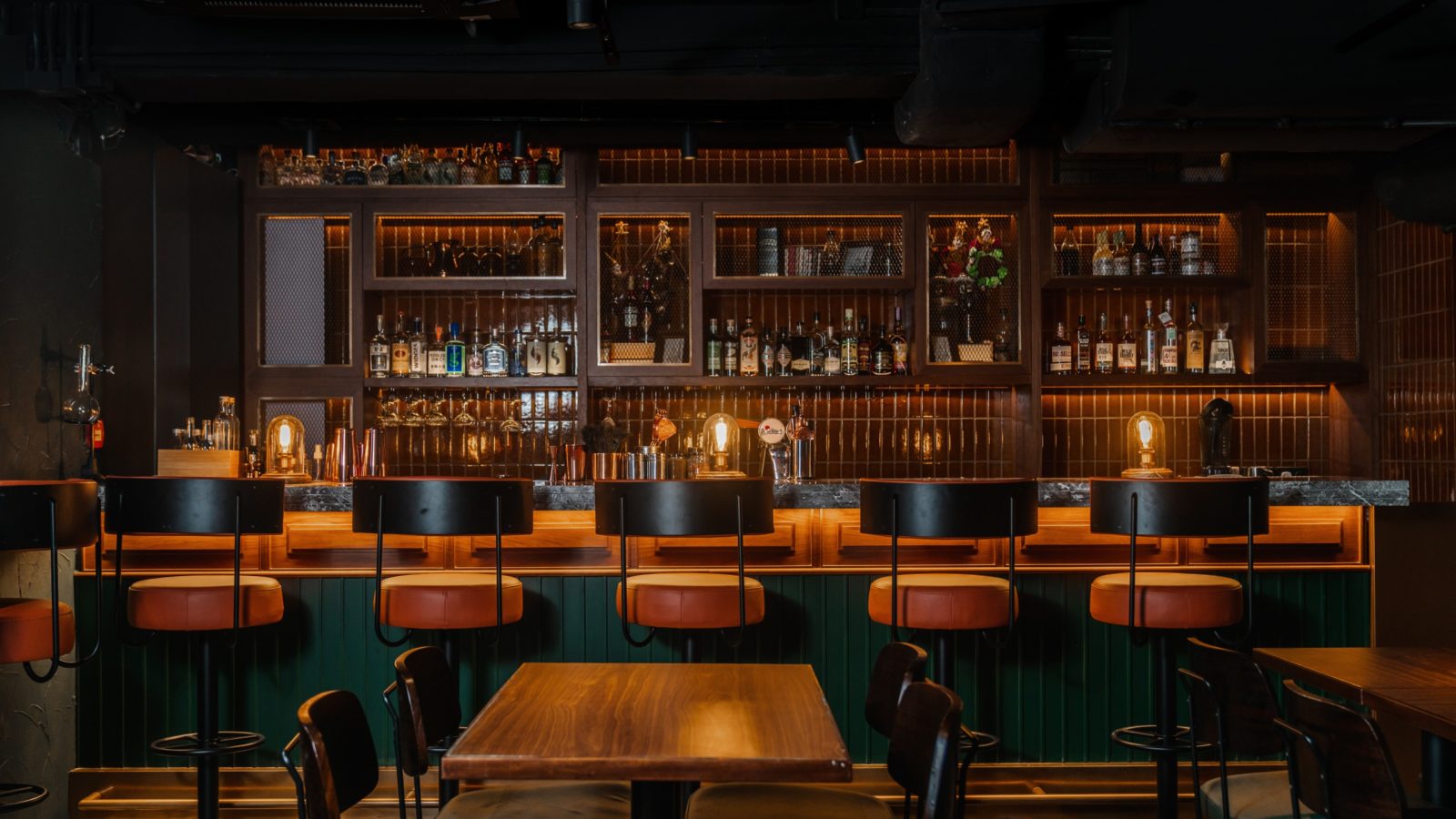 The recent see-saw of official dining restrictions notwithstanding, Hong Kong’s appetite for new eats continues to percolate well into August.

From a recently opened offering by the former proprietors of Beet, to a new dim sum parlour at historic Fringe Club, to a stylish new dining room for Burmese bites, here are the new restaurants in Hong Kong worth putting on your radar. Some are opening with delivery options too, in case you’d prefer to try some of these new restaurants in the comfort of your own home.

Two favourite haunts by Hong Kong epicureans — Kennedy Town’s Bistro du Vin (half-sibling to former Beet on Kau U Fong) and Sai Ying Pun wine purveyors The Fine Wine Experience — have created the culinary lovechild Bâtard. It bills itself as a haven for oenophiles to enjoy simple, high quality, comforting dishes made to go with their wine. Bâtard’s wine list sells its bottles at retail value, allowing you to drink the best from Burgundy, Bordeaux, Champagne and more for a lot less. On the dining front, Bâtard has enlisted the expertise of Chef Peter Teo and the team from Bistro du Vin. The menu features French-inspired highlights such as house made duck rillette on toast, Alaskan King crab ‘popcorn’, cold angel hair with Kristal caviar and kombu, charred Kinmedai on spinach, roasted whole New Territories chicken — all with well-considered vino pairings at the ready.

After a decade training under a host of London’s legendary Michelin-starred chefs — Pierre Koffman, Eric Chavot, Michel Roux Jr., to name a few — chef patron Tiff Lo is opening a cosy neighbourhood bistro right in the midst of Wan Chai’s orchid- and exotic fruit-selling lanes. The Cambridge-graduate and former investment banker had always set her sights on presenting her personal touch to French cooking, and Jean May is appropriately an intimate project that is affectionately named after Lo’s grandmother. Partnering with her designer brother Ramon for the simple and stylish surroundings, you can expect French favourites such as steak tartare and chicken liver parfait with pared-back restraint — to be complemented by natural wines chosen by sommelier Florie Tap, an alumnus of former Koffmann’s and two-Michelin-starred Hibiscus in London. Jean May is expected to officially open on 18 August with a seasonal set lunch menu and a la carte menu for dinner. Currently, those eager for a taste can opt for the Takeout Taster available Wednesday through Sunday, noon–5pm.

An exciting modern Vietnamese 65-seater by Chôm Chôm chef John Nguyen, Xuân focuses on the noodle-centric northern cuisine from the country with a progressive twist that pairs well with craft cocktails. The restaurant is named after 18th century female poet Hồ Xuân Hương, a national icon who is recognised for her risqué thinking far ahead of the times. Here, Nguyen’s dishes are also about breaking the mould, with contemporary bites such as 12-hour braised beef tongue salad and crispy grouper and crab meat spring rolls. The signature phở bowls are the main event, served with 12-hour cooked prime rib or local Three-Yellow chicken, and can be gussied up with unctuous accoutrements such as roasted bone marrow, Chinese doughnut sticks, chicken heart, chicken liver or crispy chicken skin.

A new refined Cantonese restaurant joins the flock of sky-high dining dens in Causeway Bay — perched on the 28th floor at the top of the Cubus skyscraper. The stylish jet-black interiors of the 2,000 sq.ft. dining room also features an elegant cocktail bar that’s sure to be popular once distancing restrictions ease up. Expect show-stopping dishes that match the designer digs, such as the Moon Yue Lobster presented two ways: In Shunde style stir-fried with milk, or fried with salted egg yolk; as well as the double-boiled seafood soup presented in a whole watermelon. A range of contemporary riffs on Cantonese banquet favourites round out the menu, with set lunches and dinners available and free-flow bubbly options also on offer for an additional price.

(Note: Due to recent government dining guidelines, Moon Yue is temporarily closed, with takeaways expected to be available when it resumes business.)

Founded by Yangon native Nelson Htoo, Aberdeen Street’s Club Rangoon is poised as Hong Kong’s first authentic Burmese bolthole, featuring a communal dining experience with dishes and condiments laid out for sharing. Rice is served as a base for each meal to soak up flavourful mains, soups and curries. Newbies to the cuisine won’t want to miss the mohinga, the national noodle dish featuring a fragrant lemongrass catfish broth, crispy fried split peas, boiled egg, coriander and chili. Other highlights include a Burmese-style beef biryani based on Htoo’s grandmother’s recipe — as well as the light and tangy turmeric-based lobster curry. With former Uma Nota chef Karisa Cheque at the helm in the kitchen and Pirata Group bar alumnus Jack Byrne shaking up cocktails, a visit to Club Rangoon makes for a convivial, fun meal of exploring a previously lesser travelled territory in Hong Kong’s culinary scene.

Prefer to dine at home? Aside from set lunches and dinners available for takeaway or delivery every day, Club Rangoon is offering a special ‘Hta Min Wine’ (Traditional Dining Table) sets available every weekend, with a selection of 12 Burmese staples that make for a cheerful and vibrant feast. Quenching summer cocktails are also on offer for pickup. Check out the delivery menu here.

Nove at the Fringe

Opening mid-July in a revived parlour that was once legendary fine-dine M at the Fringe, Nove at the Fringe serves all-day dim sum, Chiu Chow marinated specialties and refined Cantonese fare under the banner of chef Umberto Bombana’s Octavium Group. For the interiors, the restaurant has tapped designer Albert Kwan, the man behind the original Nove on Li Yuen Street East, China Tang and the China Club; while server uniforms also get a stylish remake — thanks to the help of celebrity stylist Felix Wong, who has dressed artists such as Eason Chan. Dishes also pay homage to some of the distinguished stars who have stepped up on the Fringe Club stage, including the Eugene Pao (wagyu bao), Ted Lo (crispy turnip pastry) and Doyle’s beer, a special brew by Hitachino Nest paying tribute to cinematographer Christopher Doyle. A cocktail list based on Chinese teas and fine prosecco adds to the experience, best paired with scrumptious dim sum.

Doing their part to follow government regulations, Octavium Group has also launched a new home dining service, Gourmet-on-the-Go, which brings western and Chinese dishes straight to your home — or even have one of their chefs come to you for a spot of private dining.

Set to open 11 August, Fat Chad’s is the next project by the folks behind friendly Sai Ying Pun hangouts BlackSalt Kitchen, Brut! and Pondi — Taran Chadha, Camille Glass, Si Hyeong Kang and George Kwok — all known for their joint fascination in inventive, multicultural menus and beautiful, convivial dining. The inspiration behind it comes from the colourful neighbourhood bodegas found in New York City — perhaps a first foray in Hong Kong — where you’ll be able to find your fill of hearty sandwiches (glimpse above the juiciest-looking New York-style pastrami we’ve set our eyes on in town), homemade ice cream and bottles of pretence-free natural wines. It comes at a timely juncture where the city’s dine-in restrictions have forced restaurateurs to explore alternative options of serving guests — here, Fat Chad’s aims to be the latest venue slinging self-proclaimed “top shelf takeaway” and artisanal groceries.

For the time being in light of government dining arrangements, restaurants under the wing of Lan Kwai Fong Entertainment have instead been touting delivery and takeout options and at-home chef kits, which just require simple assembling or finishing on the stove or oven at home. At Aria, diners keen for a taste of the new restaurant will want to dig in to takeaway-friendly signatures such as the pizza al tartufo or prosciutto di parma, Milanese veal cutlet or hearty tomato paccheri topped with creamy stracciatella. HK$800 minimum orders for LKFE direct delivery; for orders under HK$800, diners can opt for Deliveroo.

Claiming to be Hong Kong’s first authentic churrería, Twist & Buckle joins the little gourmet corner of Hart Avenue and Chatham Road South in Tsim Sha Tsui with a host of comforting, churro-based street eats. Opened by two best friends with South American roots, the shop offers the traditional cinnamon-dusted golden arches, so to speak, which are ‘twisted and buckled’ and served with dipping sauces such as traditional dulce de leche or condensed milk — Hong Kong style. More creative glazed options are also on the table, with matcha and cereal-crusted, as well as Nutella and hazelnut flavoured iterations. Try it in a selection of soft serve parfaits and with bottled lemonades you can take away to snack on the go.

Well poised for the wave of delivery-first dining concepts in the city in light of the pandemic, Bento Days is a recently opened online-based eatery slinging fresh sashimi donburis and Hawaiian-style poké bowls — sure to be a hit with the more health-conscious crowd. Try from a range of five Hawaiian donburis — from salmon-focused Lomi Lomi with spicy sauce to the protein-packed Phoenix don with steamed Kagoshima chicken drizzled with crispy, spicy fried onions and more. You can also opt for additional toppings and extra sashimi sets. Available on Foodpanda and Deliveroo covering areas in Diamond Hill, Kowloon Bay, North Point and Ma on Shan.