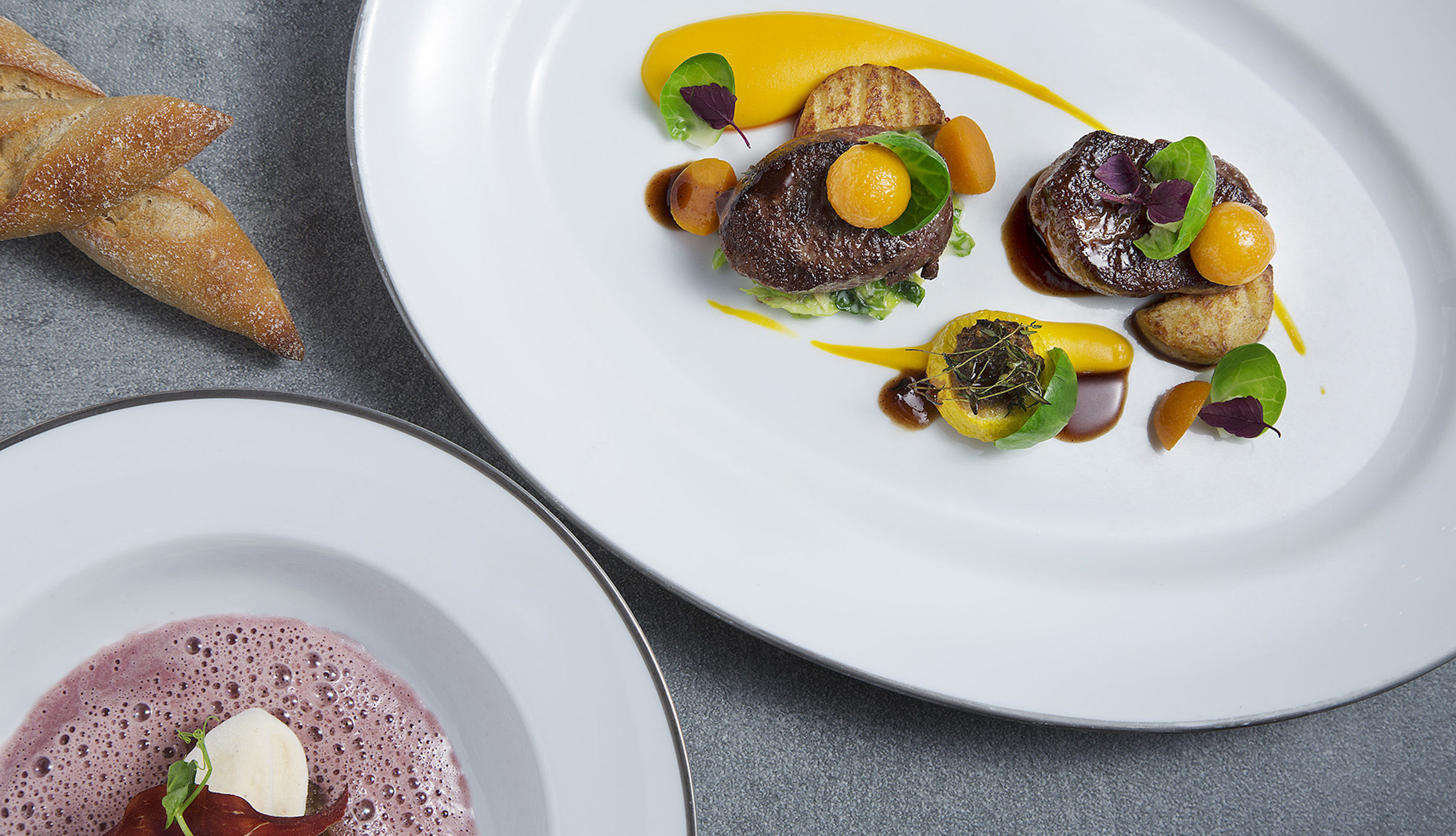 After consuming our fair share of beef, pork and poultry all year round, we welcome the arrival of game season, where our palates get a wake-up call from the wild taste and intensity of free-roaming venison, wild boar, pheasant and more. With flavours that can lean toward a sharper, almost liver-like quality due to the high blood content and low marbling, the preparation of wild game is all about technique and ingenuity in the kitchen to balance out the — for lack of a better word — “gamey” taste. Here are a few kitchens that are well-skilled in handling these more non-traditional cuts.

Stepping into Hugo’s grand dining room is a bit like stepping back in time, with the old-school dining formalities adding a ceremonious touch to the meal, from chefs wearing upright toques to waiters dishing out starters and desserts from rotating silver trolleys. In the kitchen, chef Marco Mehr consistently churns out creative and beautifully composed dishes that are rooted in classical European cooking, yet updated for the modern age.

A native of Obwalden, Switzerland, chef Marco grew up around wild game at the dinner table and is particularly adept at preparing it — the only reason you need to scoot down to Hugo’s before the season’s up. The special menu focuses on different preparations of venison, from pan-seared red deer loin with a cacao rub to bacon-wrapped roe deer tenderloin with stuffed savoy cabbage and brussels sprouts. For starters, tuck into the excellent wild deer meat tartare, which is lightly smoked, mixed through with onions and herbs and crowned with a 63-degree egg.

The winter game menu is available until the end of December.

The Nordic trend may be hanging in the balance in Hong Kong (we hope the arrival of Frantzen’s Kitchen will help revive the movement), but that hasn’t stopped Scandinavian kitchen Finds from plunging ahead with their winter game menu, dressed up with the usual assortment of earthy ingredients, from Helsinki pine oil to creamed root artichokes to crushed wild lingonberries. The typical Nordic cooking methods of salting, smoking, pickling and preserving provide an interesting contrast to the pungent depth of wild game; try the ‘blinis deluxe’ with smoked reindeer, trout roe and salted mushroom tartar served on blini pancakes (HK$188), or the more robust slow-roasted venison tenderloin with Finnish pine salt, porcini barley risotto, charred carrot and black currant sauce (HK$398).

Four Seasons Hotel Hong Kong’s fine dining French restaurant needs no introduction, and we’re fairly convinced by now that anything coming out of the two-Michelin-starred kitchen will likely be amongst the best things we’ve eaten all year. The tasting menu on now at Caprice is a nod to European game season, starting off with a warm wild Colvert duck pie, stuffed with foie gras, black truffle and orchard fruit chutney; and featuring a roasted venison loin as the main event, paired with a foie gras-stuffed pear and a wine-tinted peppery poivrade sauce. Other dishes include crayfish ravioli with girolles and caviar, soft pike biscuits with an onion consommé, and crispy almond sables with roasted figs and aromatic arbousier honey for dessert.

While it may not be as refined as the other restaurants on this list, the charming nature of this Spanish institution in Central always wins us over, with its terracotta-plastered walls and old world antiques. They have a pretty tasty game menu to celebrate the Spanish hunting season, with six dishes across a wide spectrum, including a partridge, pork liver, ham and rabbit pâté (HK$95); and a venison loin with wild berries, sweet potato and red wine sauce (HK$380). The bomba rice is a specialty at Ole, and here they’ve infused it with duck broth and topped it with sliced wild Mallard duck breast and thigh (HK$390). If you’re a large group, go for the paella Valenciana ($HK440) with bits of rabbit, chicken and snails interspersed in a rosemary and saffron-infused rice.

The winter game menu is available until 15 January 2017.