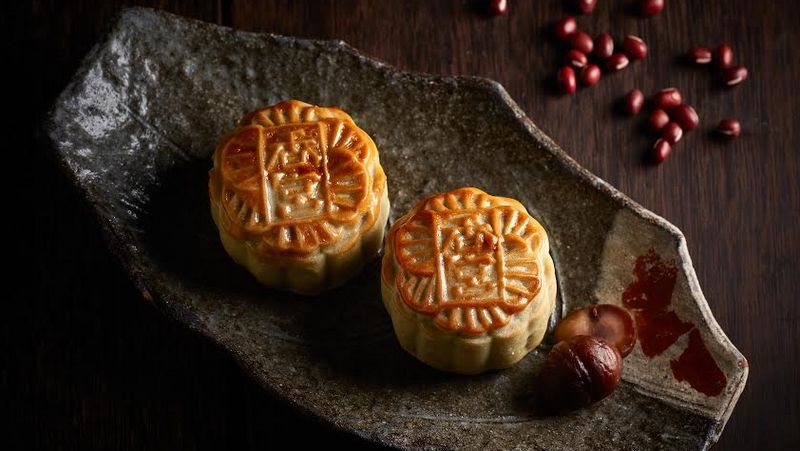 Mid-Autumn Festival might not be until 15 September this year, but we all know how difficult it is to get your hands on the best mooncakes, especially if you wait until the last minute. To make sure you aren’t disappointed this year, we’ve compiled a list of some of the most decadent mooncakes you can pre-order right now.

The Four Seasons Hotel’s three-Michelin-starred Chinese restaurant Lung King Heen will be putting a twist on traditional red-bean mooncakes with an assortment of six mini mooncakes (HK $498) featuring three different flavours: white-lotus-seed paste with preserved egg and pickled ginger, five nuts and glazed ham, and the new sweetened bean paste with hazelnut. For those that savour a more traditional taste, order the Four Seasons’ white-lotus-seed paste with double-salted egg yolk mooncake (HK$438 for four pieces). Early-birds who order before 14 August will get 15 percent off, and those who order between 15–31 August will save 10 percent.

The Mandarin Oriental Hong Kong’s legendary Mandarin Cake Shop is offering a broad range of mooncakes and gift hampers. Using the finest quality ingredients, the mooncakes are decorated with different moon shapes in homage to the Mid-Autumn Festival. Try the four-piece white lotus with two yolks (HK$468), or opt for the speciality six-piece mooncakes with low-sugar white lotus and pine seeds (HK$378). Man Wah has also created limited-edition gift hampers with lantern-inspired mini egg-custard mooncakes that come in a box of six pieces (HK$588). With only 500 exclusive boxes available, you won’t want to wait to place an order.

The Hullett House’s Mid-Autumn gift set features six assorted mini mooncakes (HK$368). This deluxe gift set is available for early-bird orders before 15 August. The more boxes you order the better, as an order for 5–10 boxes will cost HK$330 each, and 11–29 boxes will go for HK$310 each. The vibrant flavours include seaweed and lotus-seed paste, low-sugar purple-potato paste, lotus-seed paste with brown sugar and coffee, lotus-seed paste with green tea and lemon, Tieguanyin with cheese and coconut paste, and Golden Lily Oolong tea with Qi Zi and red dates paste.

A favourite amongst locals, Spring Moon at The Peninsula Hong Kong follows a traditional recipe that uses rich duck eggs to produce the finest quality mooncakes in both texture and flavour. These coveted, limited-edition, mini egg-custard mooncakes come in boxes of eight, each priced at HK$485, and are available exclusively through the hotel’s online ordering platform from 1–3 August 2016 starting at 8am daily. Note that you are only allowed to purchase a maximum of 20 boxes per day.

Mandarin Oriental is famed for its delectable mini egg-custard mooncakes made from an exclusive recipe. This year, in an effort to be eco-friendly, the Landmark Mandarin Oriental is offering a new mooncake gift package which includes a reusable handbag with a bespoke-design outer sleeve that features a strikingly contemporary Mid-Autumn Festival motif plus a pair of elegant Chinese knot buttons. Available in a choice of two fashionable colours: pure orange and Bondi blue, each bag contains six mini egg-custard mooncakes, priced at HK$338.

If you’re looking for something different than the usual lotus-paste or custard mooncakes, Pak Loh Chiu Chow is offering authentic Chiu Chow versions that come in two flavours: mung-bean paste and taro paste, which are both lighter in taste and also less sweet. The pastries also feature a delicate, flaky texture instead of the slightly chewy version we are all used to. Each flavour comes in boxes of four and is priced at HK$198. Gift boxes are also available at HK$298 each, and includes two mung-bean paste mooncakes, two taro-paste mooncakes, homemade XO sauce and two tea bags.

Fred & Chloé’s milk-custard mooncakes are handcrafted from scratch in Hong Kong using fresh, natural ingredients, including a signature milk from France. Each mooncake comes with a ‘thinner-than-average’ flaky crust which is then filled with decadent milk custard to ensure delicious goodness in every bite. With a limited quantity of 2,000 boxes, Fred & Chloé’s milk-custard mooncakes are priced at HK$250 per box of six, but there’s an early-bird discount of HK$200 per box if you order by 16 August. Online and phone orders are both accepted.

For matcha lovers, Nakamura Tokichi is launching a limited-edition Maruto mooncake box set from Kyoto that is exclusively available in Hong Kong. The limited sets are priced from HK$158 to HK$428 and come in two flavours: matcha and sweet potato with matcha, which are available for pre-order now at the Nakamura Tokichi outlets located in Tsim Sha Tsui.