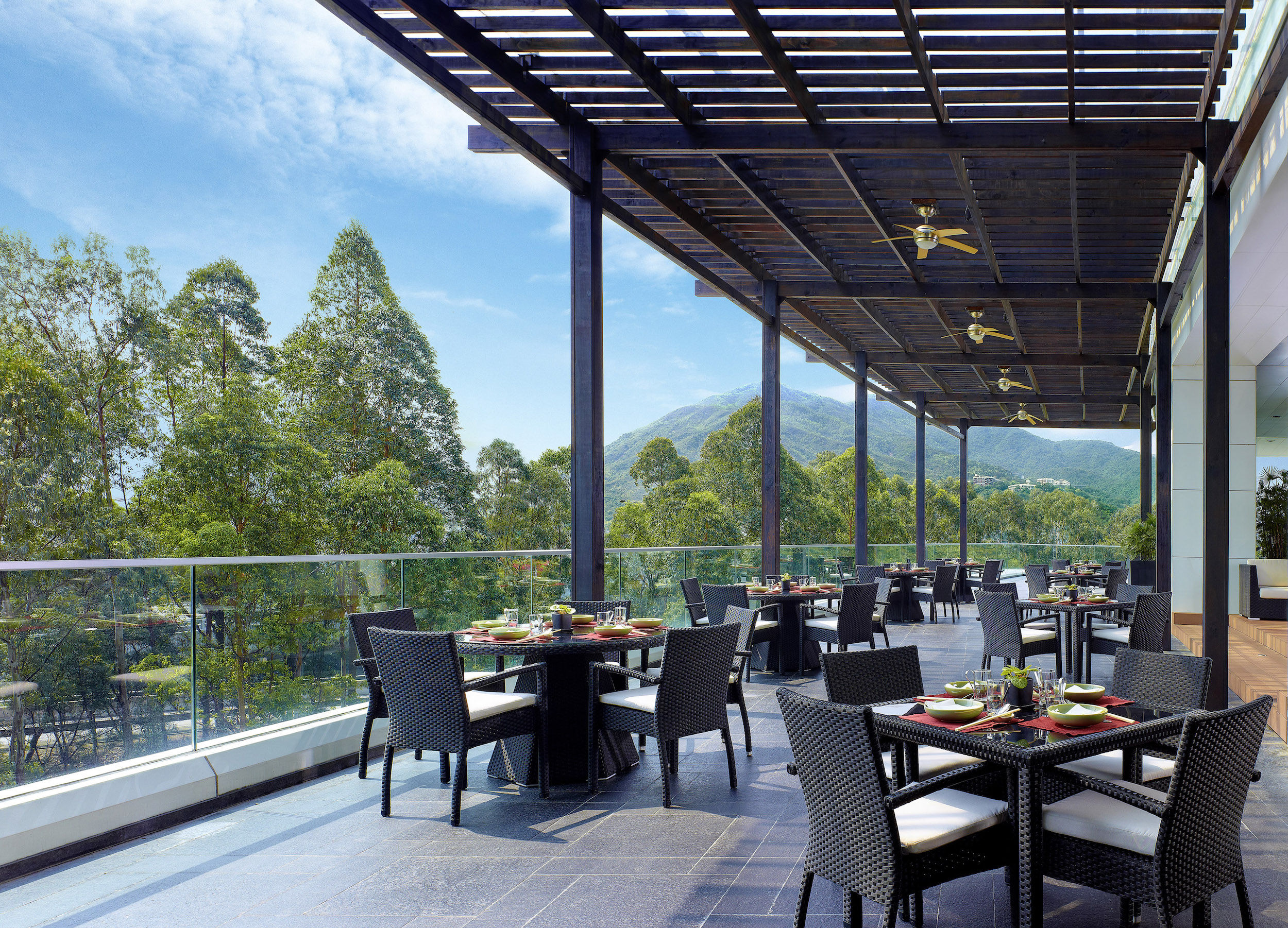 With the changing of the seasons, mild breezes and clear skies are calling us city dwellers the not-so-distant shores of the New Territories. This month, we ventured out of the concrete jungle to sample dining experiences that can only be defined as outliers (pun intended): a floating French bistro on Aberdeen Harbour, an al fresco patio in Three Fathoms Cove and a vegetarian garden hideaway on Lamma Island, for example.

An extraordinary backdrop isn’t the only factor setting these alternative restaurants apart from the milieu closer to home. The unique social dynamic is also worth noting at a few of these places, such as Ayelt Idan’s Olive Leaf on Lamma Island. The Israeli cook calls her space a “social dining” experience: “Most of the time the people who come do not know each other — and we do not know them — so [it becomes] a social gathering. Many people have made friends and even came together again. This is one of my favourite parts of doing what I do,” says Idan.

Making the trek to some of these far-flung culinary experiences can prove to be more rewarding than you’d expect, whether you’re looking for a private escape or an interactive experience. For each of our recommendations, we’ve added an extra side dish of adventure for those keen on exploring the area. Without further ado, here’s our list of the top five unique dining experiences to seek out in the New Territories.

This is one side of Sai Kung you’ve probably never seen before. As if it isn’t already hidden enough — wedged in between Ma On Shan and Sai Kung West Country Parks — One-ThirtyOne keeps an equally low digital profile by eschewing social media altogether (Its only web presence is an understated site that looks like it hasn’t been updated since 2011).

The lack of media presence makes One-ThirtyOne even more of a hidden gem. Opened 17 years ago, the elegant venue occupies the lowest floor and gardens of a three-storey Mediterranean-style house. The lawn extends to a beach, where a private dock sits in case you wanted to moor your yacht in front of the venue. We went for their four-course lunch (HK$600) and were impressed by the elegant offerings from chef de cuisine Gary Cheuk. His cooking style is rooted in French and Italian culinary traditions, drawing inspiration from his younger years growing up in different regions of Europe and attending culinary school in Switzerland.

The menu, which Cheuk changes every three to four months, started with an amuse-bouche (salmon in a tiny ice cream cone) followed by a well-plated heirloom tomato appetiser accompanied by mozzarella bocconcini with balsamic caviar and olive oil powder. The chilled ‘philibon’ melon soup that followed (served with prosciutto and port jelly) was particularly refreshing on a warm day. Vegetarians may request for an alternative to the sizeable wagyu flap meat with porcini risetto (pasta risotto). Dessert lived up to its seductive name: the Valhrona Temptation was a hit, with different textures of chocolate rounded out by coffee and mascarpone.

One-ThirtyOne is a meal you’re meant to take your time with, a little slice of the Mediterranean by way of Hong Kong. It’s no wonder almost all their weekends are fully booked for weddings in the cooler months of the year. If you’re able to snag a booking, don’t let go of it.

While you’re there: Work on your swing at the picturesque driving bays of Garden Farm Golf Centre.

Seated at the mouth of the Shing Mun River, where it opens up to Tolo Harbour, Sha Tin 18 in Hyatt Regency is a delicious jumping-off point for exploring Pat Sin Leng and Plover Cove’s natural wonders. The restaurant, with its view of the Tai Po Kau mountains, boasts some of the best Peking duck in not just the New Territories, but perhaps all of Hong Kong — and it’s more than deserving of a stop on your East Rail itinerary, if not as the main destination.

The multi-award-winning restaurant is famous for its northern Chinese fare (although it also serves excellent dim sum) — so it’s always best to go for their specialty: the Peking duck (HK$500 half, HK$788 whole). The roasted bird is served in three courses (you can modify depending on individual preferences): with pancakes and sugar, minced and wok-fried, and finally in soup form.

If you’re looking for a quicker and lighter meal, the steamed garoupa belly (HK$318) is fantastic, flavoured with preserved green beans and wild chilli. The wok-fried rice rolls with green beans in Chinese basil paste (HK$188) is a good vegetarian option with a local touch. Sha Tin 18 unexpectedly impresses in the pastry department as well with their fusion red-date madeleines (HK$65), which you must try with the velvety Grand Marnier custard sauce.

On a good day, try and get a table outside on the outdoor terrace. It’s great to breathe in the fresher air in these parts and forget for a moment where you are.

While you’re there: Rent a bicycle by the University Station Cycling Entry / Exit Hub and go up or down the waterfront. The southbound route takes you along Shing Mun River past the Hong Kong Heritage Museum to Tai Wai. North takes you up the cove through the Science Park, Tai Po Waterfront Park and Tai Mei Tuk.

Despite having clickbait written all over it, we couldn’t help but be intrigued by the headline of a recent article we read about Alexandra’s French Kitchen: “This Woman’s Yacht is One of the Best French Restaurants In Hong Kong”. Well, it turns out the photos didn’t do the restaurant justice. To our surprise, Alexandra’s French Kitchen turned out to be one of the most exceptional dining experiences we’ve ever had in Hong Kong, all from the top deck of a boat parked in Aberdeen Typhoon Shelter.

Getting to the ‘restaurant’ is a delightful adventure in itself: You’ll be directed to an unmarked dock, where you’ll board a sampan (local water taxi) to get to Alexandra’s boat. If you come at dusk, Jumbo Kingdom will already be twinkling at you — an iconic sight in many a Hong Kong film. “Row one”, you will say, and the sampan lady will weave her way through the other yachts to bring you to where you need to be.

We chose the “Tradition Tradition!” menu (HK$552 per person), which featured four delightful home-cooked French courses. Our favourite was the slow-cooked lamb shanks, cooked with herbs for seven hours until the meat is mouthwateringly tender. The tomato-parmesan crumble and delicate vegetarian quiche were rustic in nature and made the most of fresh, seasonal vegetables (bonus points for cooking everything on a boat!). The French cheese board was top-notch, and we scooped up every last bite of the luscious chocolate cake for dessert.

If and when you do come, you might want to bring a bottle or two of Malbec (no corkage!) and a portable speaker to play your tunes under the moon and stars.

While you’re there: Check out the aquariums and rollercoasters at neighbouring Ocean Park, or take a short hike up Yuk Kwai Shan (Mount Johnston) all the way down to Ap Lei Pai.

This rooftop haunt soars amidst the high rises of Tsuen Wan. The lift up to Panda Hotel’s 30th level takes you to a sprawling salon of floor-to-ceiling windows. Here, the carpeted floor mutes the soft clinking of ceramic teapots and plates at generously spaced-apart tables.

YinYue is a Michelin Guide-recommended Cantonese dining room just as famous for its dim sum as for its panoramic city views. We tried the seasonal menu in one of the restaurant’s private areas — a grand setting befitting the hotel’s status as Hong Kong’s fifth-largest hotel (with 911 rooms in total).

We started our meal (set menus start at HK$2,788 for 6 persons and HK$5,288 for 12) with the assorted appetiser platter featuring char siu (barbecued pork), vegetarian rolls and smoked salmon — the sample platter was well executed and whet our appetite for the main dishes to come. The stars of the meal were the deep-fried shrimp paste with mashed taro and the mouthwatering whole-roasted suckling pig, boasting the signature crispy skin. We also savoured the fried rice studded with bits of shrimp, salty ham and shredded conpoy. If you’re into tea, you’ll want to pair your meal with the aromatic and herbal ginseng oolong tea, which replaces the traditional Jasmine brew and makes a soothing backdrop to the meal.

Israeli chef Ayelet Idan is bringing something fresh and healthy straight from the Mediterranean to Lamma Island. And it’s not just food — it’s the whole social dining experience in her sunlit haven of a garden.

“More people are interested in having other dining experiences,” says Idan of the growing “alternative dining” landscape in Hong Kong. “Food is something that bridges many gaps and brings people closer. I would like to see more social dinners that include recognition of different cultures and meeting people who are different from your normal social circle.”

Idan’s leafy garden is located in a small village in Lamma; not the most accessible of dining venues, but the point is to feel like you’re having a mini-holiday as you take a break from city life. “Most people love the ferry ride via Aberdeen,” says Idan. “We even get people coming with their own boat to reach our home and garden as we live in a place very different from a typical Hong Kong residence.”

At Olive Leaf, get ready for a true Mediterranean- and Middle Eastern-inspired spread. Start with smoky baba ganoush and earthy hummus paired with charred pockets of pita bread, then follow it up with an array of fresh salads including cucumbers, radish and sumac, plus a vibrant green-herb and lemon salad. Following the mezze array, you can feast on matbucha — a cooked dish of tomatoes and roasted bell peppers — cauliflower and tomatoes baked in tahini sauce; bulgur and lentils with fried onions and sumac; and semolina, dates and nuts cake for dessert. The best part is Idan provides regular cooking classes ($600 including lunch, drinks, snacks and recipes), so you can learn to recreate her vibrant and colourful dishes at home.