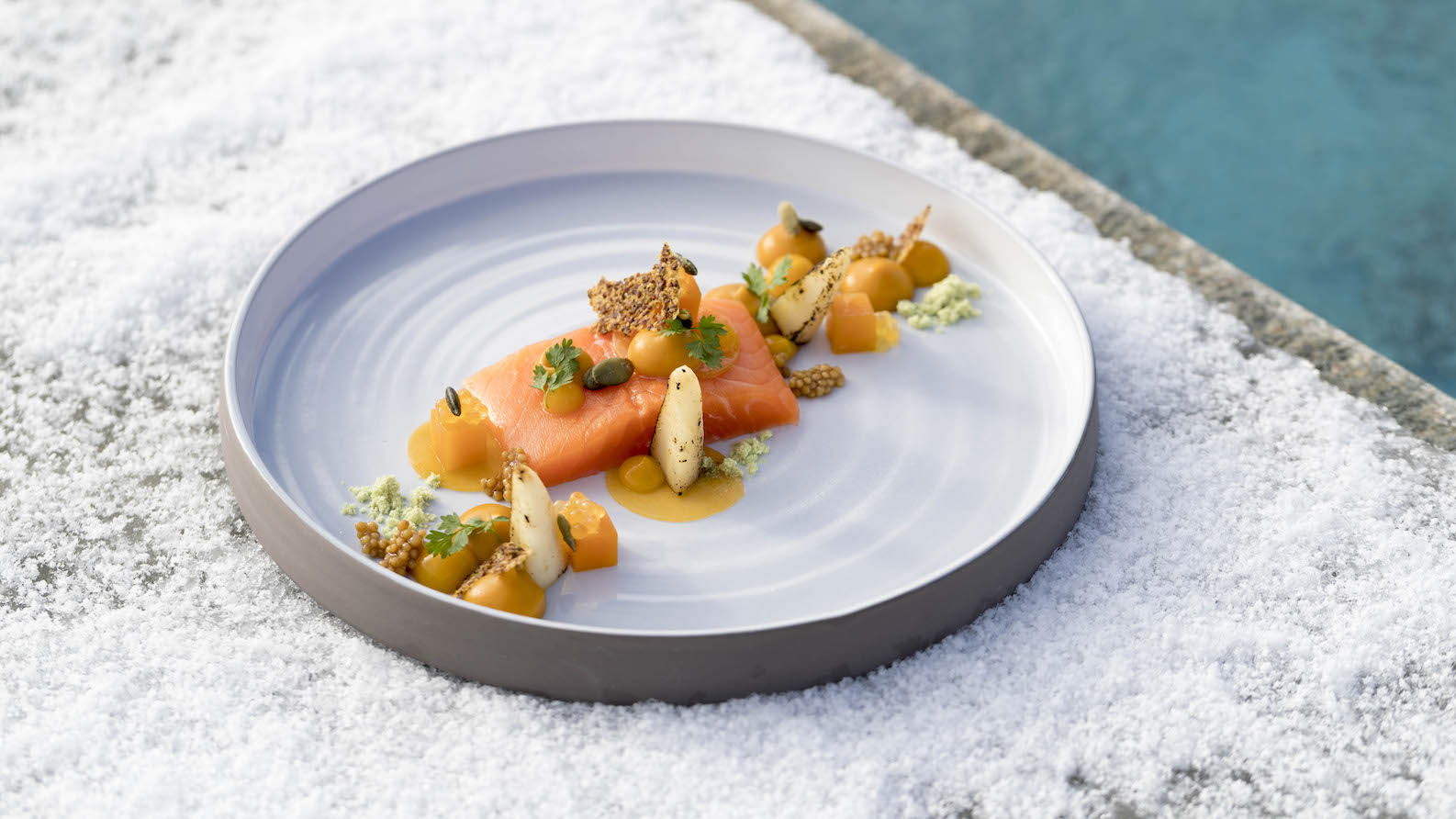 Mark your calendars for these exciting culinary collaborations taking place around the city this October — from LA’s chef David Schlosser of Shibumi popping up at Ronin, to an exciting Krug collaboration involving peppers. These are the limited-time pop-ups not to miss this month.

Chef David Schlosser from Los Angeles’ famed Shibumi lands at Ronin this month, marking the meeting of two chefs with remarkably similar culinary sensibilities. Chefs Schlosser and Hong Kong’s Matt Abergel will join hands for this anticipated evening showcasing the many intricacies of Japanese cuisine, elevated by the chefs’ creative license in the kitchen. Beautifully curated and artistically presented, dishes showcase Abergel’s technical wizardry and Schlosser’s 20-plus years of international cooking experience. Expect to see signature dishes from LA’s Shibumi, where Schlosser has gained critical acclaim for creations such as jellied carb skin on sea bream sashimi, and a riff on a crudités plate with ripe avocado, wild leaves, silky corn purée, and yuba.

Award-winning Chef Kwame Onwuachi, whose been named by the San Francisco Chronicle as “the most important chef in America”, will make a highly anticipated return to Test Kitchen this month, debuting brand new dishes from his upcoming restaurant project. The young chef has had a landmark year, picking up the James Beard award for Rising Star Chef of the Year, and being named one of Food & Wine’s Best New Chefs in 2019. His memoir, Notes from a Young Black Chef, has received critical acclaim, and will be adapted into a film this year. Onwuachi’s food centres on Afro-Caribbean cuisine, with highlights including octopus with Veracruz compote, scallop masa and puffed amaranth; and Moi Moi Chawanmushi — black-eyed pea custard, uni and confit chicken.

Krug is back again with its Krug x Single Ingredient series, building upon the success of previous iterations highlighting the mushroom and the egg. This year, the spotlight shifts to peppers, with 13  Krug Ambassades across four continents taking inspiration from the Champagne house’s savoir faire to create new dishes centred around the spicy ingredient. Deemed ‘Rock Pepper Scissors’, the initiative sees chefs turning the versatile ingredient into unexpected pairings with Krug Grande Cuvée and Krug Rosé.

In Hong Kong, the six Krug Ambassade Chefs include chef Umberto Bombana, Guillaume Gailliot, Mori Tomoaki, Robin Zavou, Uwe Opocensky and Vicky Cheng. Expect to see peppers manifested in myriad forms around the chefs’ acclaimed restaurants, from chef Bombana’s sweet pepper risotto with anchovy, to chef Gailliot’s cocoa pigeon and piquillos pepper, and chef Zavou’s braised abalone with cuttlefish noodles and shishito pepper tempura. On 3rd October, five of the chefs will gather for a Krug x Pepper dinner to present each of their pepper pairings (by invite only).

A homecoming is in the works at The Peninsula Hong Kong, where chef Mike Wehrle will return to his post at Chesa for a few one-off dinners, as part of the hotel’s series of visiting international chefs taking over its kitchens this autumn. From 10–12 October, Wehrle leaves his post as culinary director at Bürgenstock Hotels and Resorts to return to The Pen, where he previously spent eight years honing his culinary skills. In a glorious homecoming, he’ll showcase the evolution of his cooking style while weaving in vast international influences as a testament to his time spent working in luxury hotel kitchens around the world. Following chef Wehrle’s showcase, mark your diaries for 21–22 October, where a double bill features two-Michelin-star French chef Bruno Oger and chef Albin Gobil in a joyous Gallic celebration at Gaddi’s.

The culinary star-studded power at the Mandarin Oriental continues with the announcement of chef Bongkoch ‘Bee’ Satongun’s 2-day residency at The Krug Room from 16–17 October. The powerhouse chef in charge of one-Michelin-starred Paste Bangkok (No. 28 on the Asia’s 50 Best Restaurants list in 2019) is set to bring her flavour-packed fare to one of Hong Kong’s most elegant dining rooms, showcasing her striking contemporary Thai flavours in an exquisite 9-course menu which dances between tradition and innovation.

Following her residency at The Krug Room, chef Satongun will cap off her trip with a four-hands dinner together with the hotel’s Executive Chinese Chef Wing-Keung Wong, taking place at Man Wah from 18–19 October. For the collaboration, each chef will present five signature dishes, including flower crab with Chumporn roasted shrimp paste dressing, ginger, cloud ear mushroom and Thai mustard leaf from chef Satongun; and steamed and sautéed egg with lobster, sea urchin and mini goldfish dumpling from chef Wong.

The Shangri-La has announced an exciting new culinary initiative, “A Michelin-starred Journey with Chef Gordon Leung”, featuring a series of exclusive four-hands dinners set to take place across Shangri-La hotels in Beijing, Paris, Singapore, Hong Kong, Shanghai and Guangzhou. With over 30 years of experience, chef Gordon Leung recently stepped up to the appointment of Corporate Chinese Executive Chef, and will be bringing his vast knowledge of different Chinese foodways to the flagship properties across Asia.

Landing in Hong Kong on 24 October at Kowloon Shangri-La, chef Leung will innovate in the kitchen together with Executive Chinese Chef of Shang Palace, Daniel Cheung, to deliver a specially curated menu of Cantonese classics. Highlights include oven-boiled cod fillet with conpoy, Iberian barbecued pork, and the signature Shang Palace Dessert Platter — all dishes paired with fine wines and baijiu.

Dining Restaurants Hong Kong Dining Ronin Pop-ups dining pop-ups guest chefs The Krug Room shibumi
Leslie Yeh
Editor in Chief
Having worked as a lifestyle editor for almost 10 years, Leslie is thrilled to be writing about the topic she loves most: wining and dining. When she's not out pounding the pavement for the latest new restaurant opening or tracking food trends, Leslie can be found at home whipping up a plate of rigatoni vodka and binge-watching Netflix with a glass of Sauvignon Blanc in hand.
Dining Restaurants Food Trends Drinks Travel