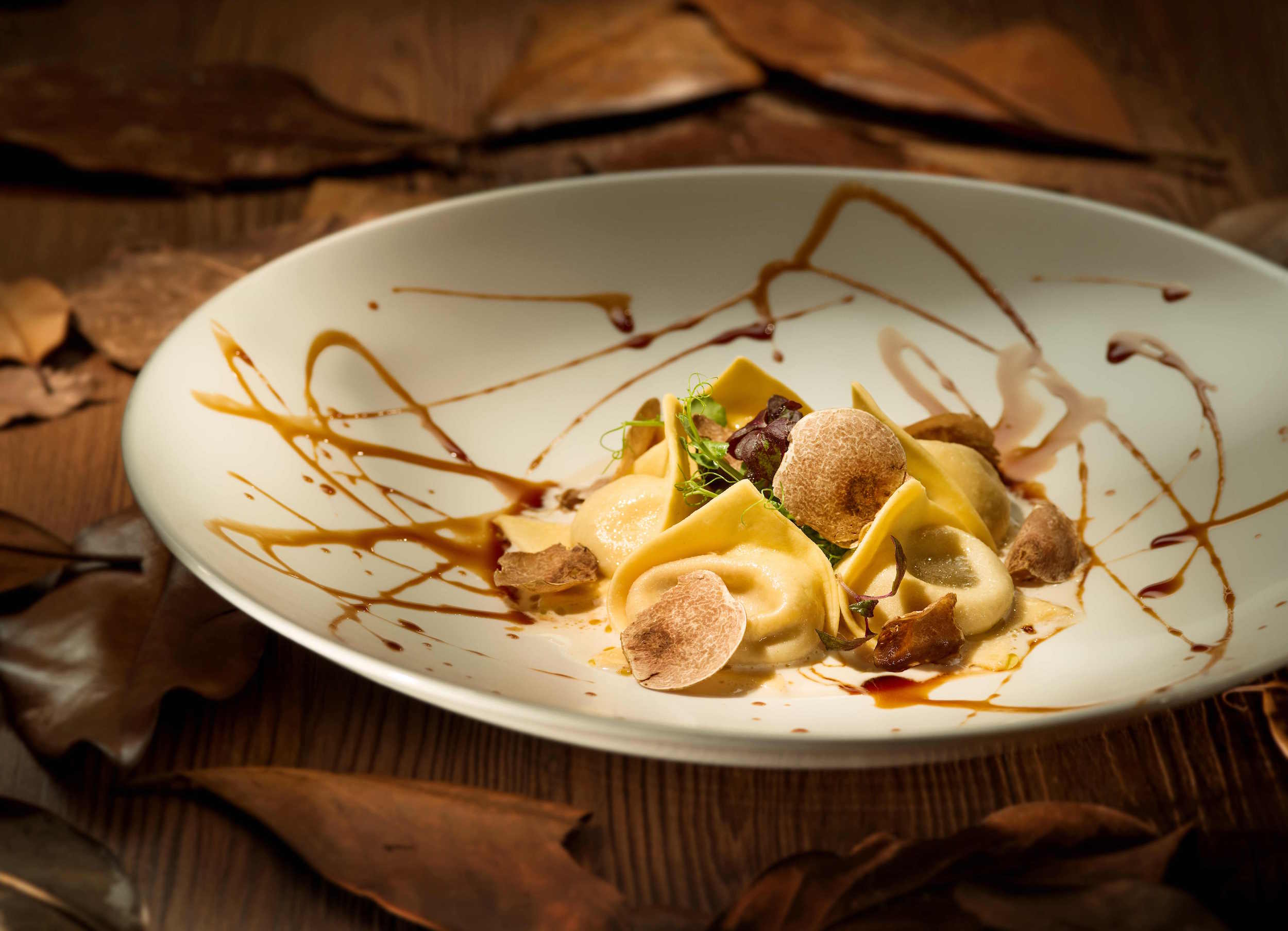 7 white truffle menus to dig into this autumn

There’s nothing like the start of white truffle season — the fragrant, oddly shaped tubers from the Piedmont region of Italy lending their heady, earthy aroma to everything from handmade pastas to hearty fall soups. The appearance of the rare mushroom on Hong Kong restaurant menus is one of the most highly anticipated events each year for true food connoisseurs, lasting just a few short months on specialty menus until the season (or the local supply) runs out. For a taste of this prized food commodity, here are seven truffle menus that are shining a spotlight on this precious funghi. 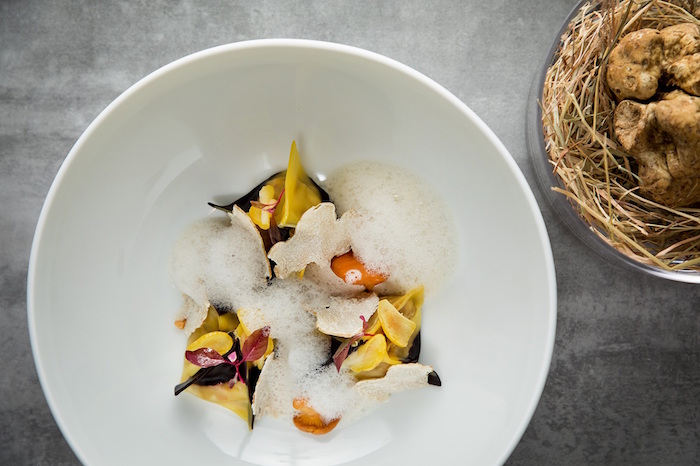 It’s a white truffle feast this season at Michelin-starred ÉPURE, which recently launched its exclusive white truffle menu crafted by Executive Chef Nicolas Boutin. The ‘white diamonds’ of the kitchen are presented in a unique four-course tasting menu, with the truffles starring in the first three meticulously composed dishes. Start off the  meal with the organic farm egg omelette soufflé, which refines the familiar combination of truffle and eggs with silky egg whites dotted with parmesan, Cevenne onion and garden leaves. This is followed by chestnut ravioli with Swiss chard, mushroom and truffle in a roasted garlic froth, and succulent Bresse chicken breast with artichoke and watercress under a showering of white truffle. The meal wraps up with the poached pear with jelly, citrus zest and Tahitian vanilla — a crisp and refreshing dessert to realign your palate from the flavour-heavy meal.

Price: HK$1,988 plus 10% per person for four-course tasting menu, plus HK$620 for wine pairing; additional white truffle priced at HK$98 per gram. 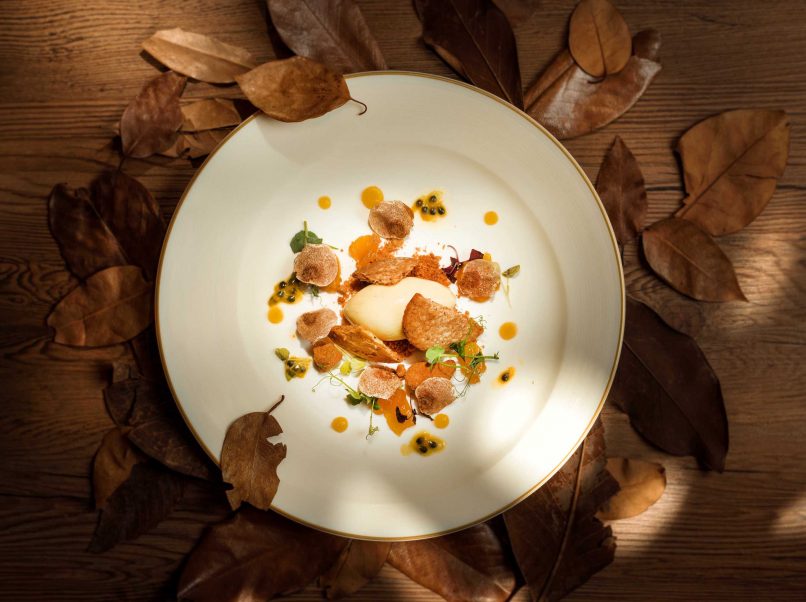 Newly appointed chef Riccardo Catarsi has just joined the ranks at Nicholini’s inside the Conrad Hong Kong, and he’s making his debut with a tantalising white truffle menu. Hailing from Livorno in Tuscany, chef Catarsi shines a light on the prized white truffle of his native Italy with notable dishes including pan-fried Hokkaido scallop with purple potatoes, salmon roe and sea urchin sabayon; and homemade tortellini with white truffle, foie gras, homemade parmesan milk and veal jus — a silky and earthy plate of comfort carbs just in time for autumn. Seafood and meat lovers can also get white truffle shaved on the turbot, red mullet and veal tenderloin dishes. Family-friendly Italian eatery DiVino tempts us every year with its “no rules, no limitations” truffle policy (translation: add as much shaved truffle as you want to any dish on the menu). Of course, some dishes are naturally a better match with white truffles than others, and with the costly price of these paper-thin shavings, you’ll want a few recommendations on where to get the most bang for your buck.

That’s why each of DiVino Group’s restaurant’s head chefs have come up with three specialty dishes to pair with white truffles. Stop by the flagship DiVino for the 36-degree onsen egg with crushed Piedmont hazelnut and Alba truffles; buffalo ricotta dumplings on Grana Padano cream; and carnaroli risotto with stracchino cheese, Champagne and white truffles. Alternatively, make a pitstop at harbourfront restaurant Spasso where you can feast on Black Angus beef tartare with grated hazelnuts and truffle; risotto with Champagne and white truffle; and sabayon foam with ladyfingers, Moscato wine jelly and white truffle. Chef Philippe Orrico is showing off white truffle’s versatility in both sweet and savoury dishes at his Michelin-starred flagship, ON Dining. Available à la carte, you can choose to kick off the French feast on a lighter note with chef Orrico’s hamachi carpaccio, lifted with parsley jus and noisette butter and a generous sprinkling of white truffle. From there, delve into the hearty egg raviolo, cooked in mushroom bouillon and tossed in a creamy parmesan cheese sauce under drifts of white truffle. Lovers of sea urchin won’t want to miss the tagliolini, which features the premium orange tongues in a decadent lobster emulsion. For dessert, white truffle adds a unique flavour profile to the ricotta mousse, drizzled in praline sauce and sweetened with white chocolate and homemade vanilla ice-cream. 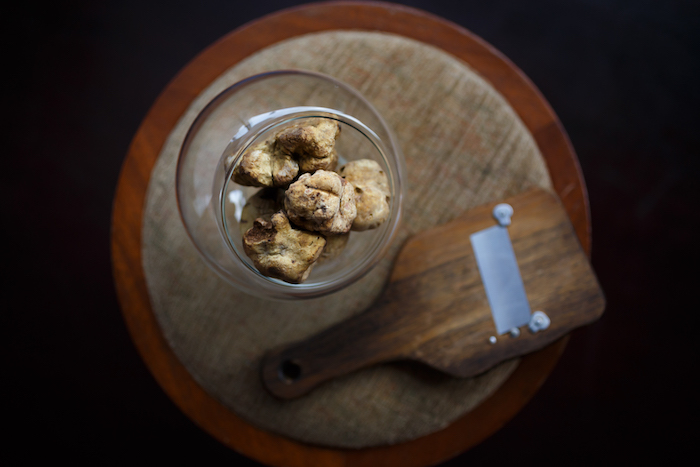 Exotic white truffles are captured in a number of stunning dishes from chef Alessandro of Angelini at Kowloon Shangri-La. The Italian pasta palace is embracing the white truffle season with a menu that includes runny eggs with Alba white truffle shavings; tagliolini pasta with white truffle; beef tenderloin served Rossini style with generous shavings of truffle; and the autumn-inspired 63-degree egg with pumpkin cream, sweetbread and chestnuts. Each gram of truffle is priced at HK$110, so you can choose to have a small taste or splurge on a generous mountain of white truffle if you’re feeling fancy. 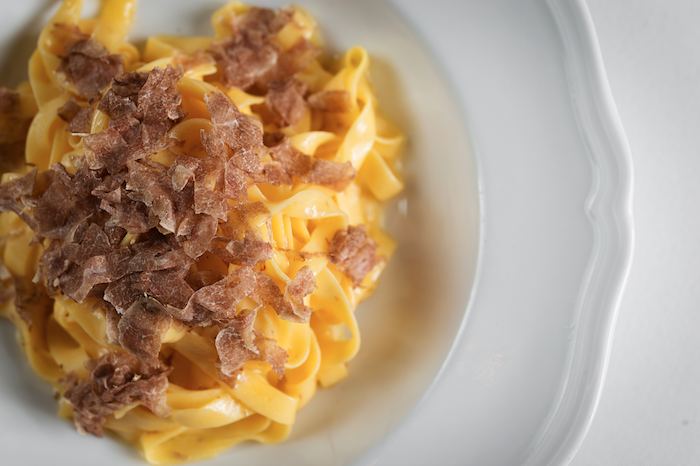 Put on your Sunday best and head to New York-Italian hotspot Carbone for a white truffle feast through December, with fragrant white Alba truffles headlining the menu. In Carbone’s signature tableside service, tuxedo-clad captains will be shaving the truffles at the table, as guests choose from whole truffles or order by the gram. To complement the earthy, aromatic notes, chef Billy Otis has created a special menu which includes scallop crudo balancing truffle and sea salt; truffle fettuccini; truffle-topped Japanese eggs on brioche; and plump truffle tortellini perfumed with white truffle butter, sheep’s milk ricotta and parmesan. Guests can also add truffle to Carbone classics such as the carpaccio Piemontese, which normally comes with a drizzle of truffle oil. We love Sabatini for its old-school Italian vibes, and for those living on the Tsim Sha Tsui side — there’s no better place in the neighbourhood to head for your fix of hearty Italian fare and simply made pastas. The kitchen at Sabatini is showing its enthusiasm for truffle season with no less than eight dishes on the menu, ranging from risotto with shaved white truffle and veal jus to pan-fried Iberico pork chop with chestnut puree and white truffle. If you want to splurge, opt for the full truffle tasting menu; priced at HK$1,980 per person, the menu starts with organic scrambled eggs on toast with shaved white truffle; followed by beef tenderloin tartare, tagliolini and veal scallopini, all topped with generous amounts of truffle; and ending with white truffle ice cream with — you guessed it — more shaved white truffle.

Hong Kong Spasso Dining Restaurants Italian White Truffles Carbone DiVino ÉPURE White truffle Where to eat on dining truffle nicolas boutin white truffle menus best truffle dishes best white truffle dishes truffle eats
Leslie Yeh
Editor in Chief
Having worked as a lifestyle editor for almost 10 years, Leslie is thrilled to be writing about the topic she loves most: wining and dining. When she's not out pounding the pavement for the latest new restaurant opening or tracking food trends, Leslie can be found at home whipping up a plate of rigatoni vodka and binge-watching Netflix with a glass of Sauvignon Blanc in hand.
Dining Restaurants Food Trends Drinks Travel
Sign up for our newsletters to have the latest stories delivered straight to your inbox every week.