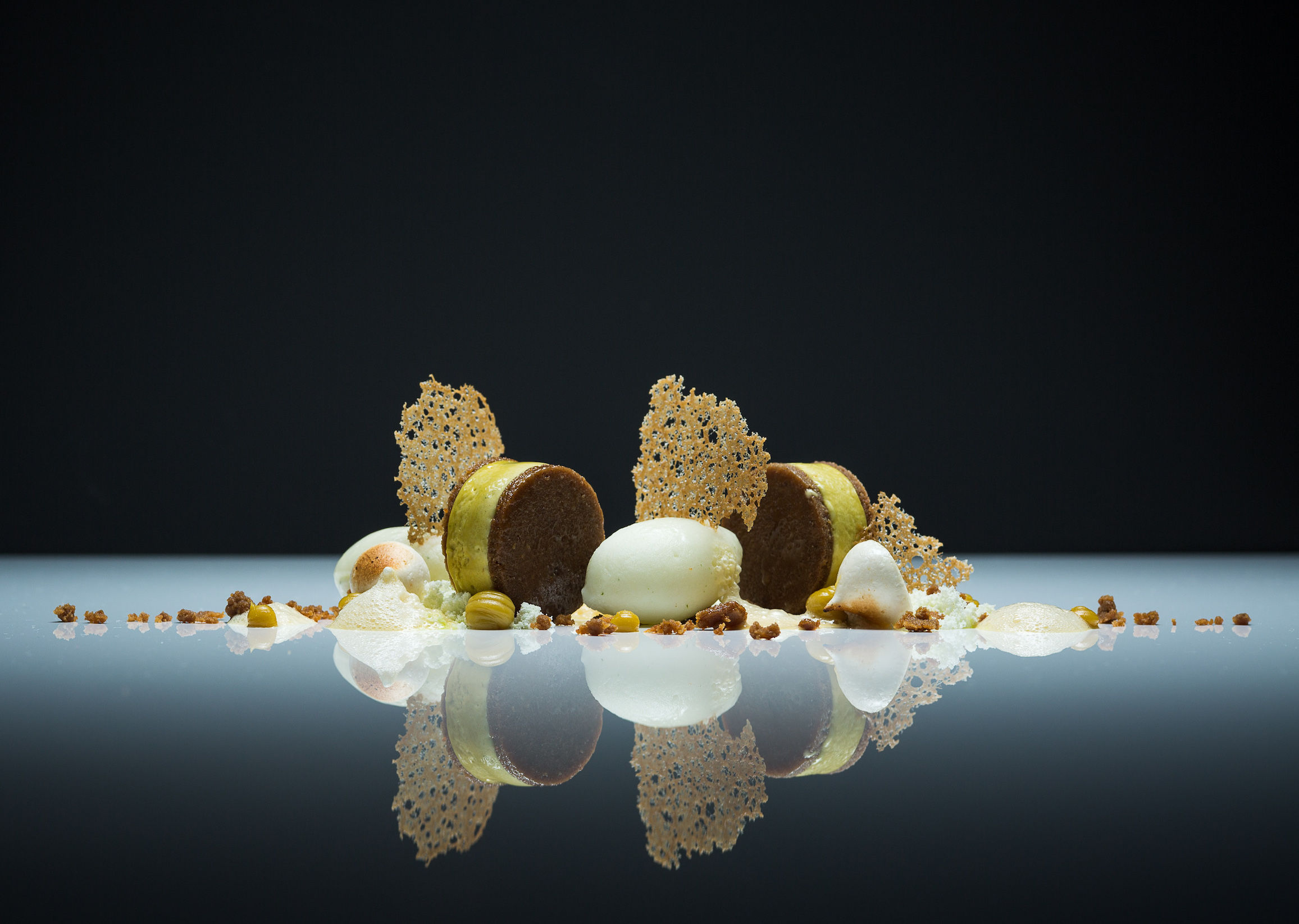 10 dining pop-ups not to miss in October

October is shaping up to be an exciting month of new restaurant openings, and while we can’t wait to try the latest concepts from some of the industry’s biggest names, we’re also reserving a few dates in our diary for the one-off events and visiting guest chefs that are breezing through town this month. From a Pinoy-inspired pop-up courtesy of one of Melbourne’s hottest Southeast Asian spots, to a special celebration of regional Chinese cuisines at the Four Seasons’ three-Michelin-starred temple, these are the dining pop-ups that are on our radar this month. 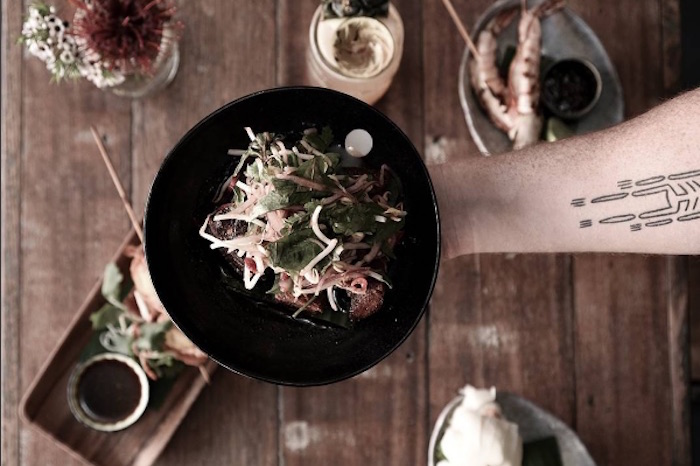 Hong Kong is getting a taste of Melbourne’s world-class dining scene this month, as Fitzroy’s pan-Asian restaurant Rice Paper Scissors rolls into town for a 3-night pop-up at Test Kitchen. The popular Southeast Asian eatery has piled on the accolades over the years, dishing up a fuss-free menu of street food-inspired eats, courtesy of head chef Ross Magnaye and chef-owner Rahmie Clowes. Ross, Rahmie and the extended RPS crew will be headed over to Hong Kong to share a few of their signature items along with a handful of hearty Filipino dishes. The family-style sharing menu includes the signature kangaroo tartare; Filipino ceviche ‘kinilaw’ with pickled vegetables and fermented coconut; squid with garlic and coconut vinegar; crispy pork belly in Cebu-style with spices; and a Filipino stew with okra, pumpkin and snake beans. 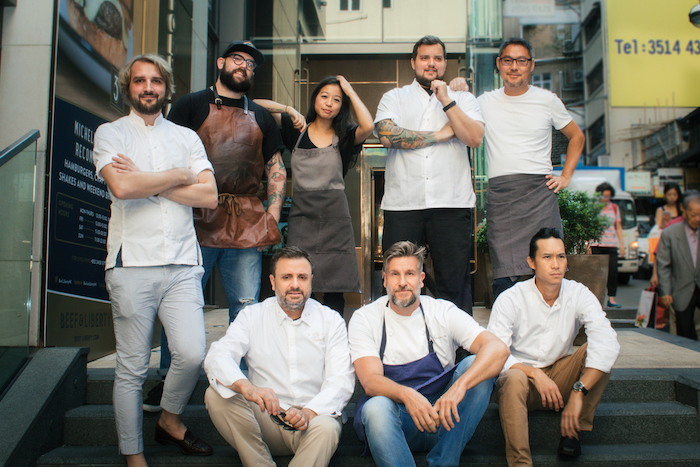 If you want to dine for a good cause this month, make sure to book your tickets now for #CookForSyria, a Syrian-inspired chef’s dinner which sees nine of the city’s top chefs joining together to raise money for the Syrian humanitarian crisis. A global initiative which first launched in London in 2016, #CookForSyria has grown to encompass pop-up dinners, bake sales and cookbook sales, supported by big names in the industry such as Jamie Oliver and Yotam Ottolenghi. Brought to Asia for the first time, the Hong Kong event will raise money for the local branch of UNICEF with an eight-course Syrian-inspired dinner for 110 guests, including free-flow drinks and raffle prizes. The all-star cast includes Uwe Opocensky from Beef & Liberty and Restaurant Uwe, Peggy Chan from Grassroots Pantry and Nathan Green from Rhoda, amongst others.

The Taste of Artistry at Four Seasons Hotel Hong Kong Executive chefs from both restaurants will design exclusive menus meant to celebrate regional Chinese cuisines, with impeccable craftsmanship and artistry on display. The eight-course tasting menu will include classic Cantonese dishes from chef Chan Yan Tak of Lung King Heen (think steamed lobster and egg white with bird’s nest) and Zhejiang specialties from chef Wang Yong of Jin Sha (flaky spring onion pancakes with caramel goose liver pate, and a version of Shanghainese pork made with Iberico pork shoulder are on the menu). The meal will be accompanied by a Chinese wine pairing, as well as performances from Chinese opera face and costume changers. 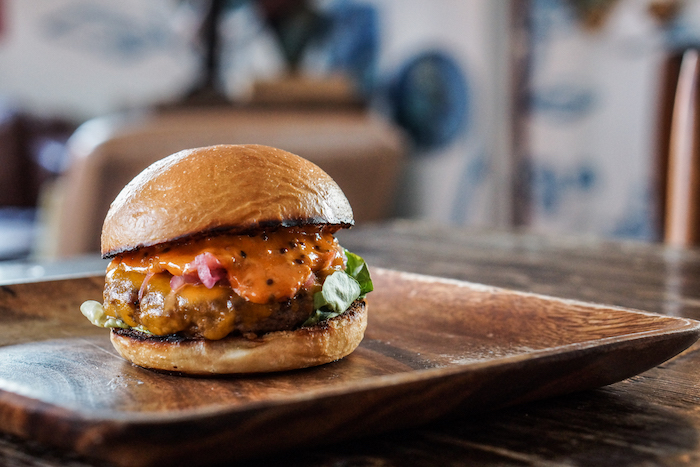 In case you somehow missed the news, Potato Head’s burger concept, Three Buns, has landed in Hong Kong for a one-month pop-up at the Sai Ying Pun outpost of the famed Bali beach club. Headed up by chef Adam Penney, formerly of London’s Patty & Bun, Three Buns touts a menu of Southeast Asian-inspired gourmet burgers, bowls and sides, with signature buns such as the Baby Huey (HK$100) with slow-cooked homemade ketchup, smoked paprika and mustard mayo; and the Smokin’ B-Boy (HK$128), a loaded patty blanketed in smoked applewood cheddar with treacle bacon. Chase down the artery-clogging meal with a refreshing new cocktail menu at Potato Head, including the Balinese Lovers Punch (HK$110) with rum, brandy, genever, pomelo shrub, clarified milk and island spices.

The Brooklyn Corner at Beef & Liberty 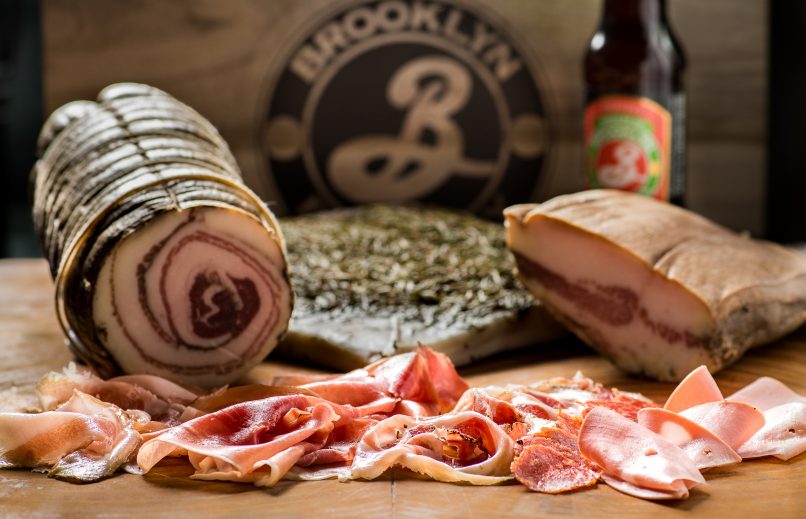 When: Thursday–Saturday evenings all month

Price: HK$888 plus 10% surcharge per person; reservations must be made 48 hours in advance.

Ever since ex-Mandarin Oriental Executive Chef Uwe Opocensky stepped into the role of Group Executive Chef at Beef & Liberty, the gourmet burger restaurant has had its hands full with a number of cross-overs and collaborations. This month, they’re revealing their biggest one yet: a partnership with New York’s renowned Brooklyn Brewery to launch The Brooklyn Corner, where gourmands and beer lovers will have a chance to try the NYC brewery’s limited-release beers while noshing on B&L’s popular patties.

Adding fuel to the growing craft beer movement in Hong Kong, The Brooklyn Corner is not just about fine barrel-aged brews — it’s a multi-sensory experience which pays tribute to Brooklyn Brewery as well as the greater New York beer and food culture, taking place within an interactive dining space seating 6–10 guests at a time. A special Brooklyn-inspired meat menu has been curated by chef Opocensky and Brooklyn Brewery’s chef Andrew Gerson (dishes include bone marrow with crispy onions and steak florentine with butter and duck fat-roasted potatoes), while featured beer pairings are courtesy of brewmaster Garrett Oliver. Moreover, The Brooklyn Corner will include Hong Kong’s first virtual reality installation, where guests can embark on a visual tour inside Brooklyn Brewery itself. 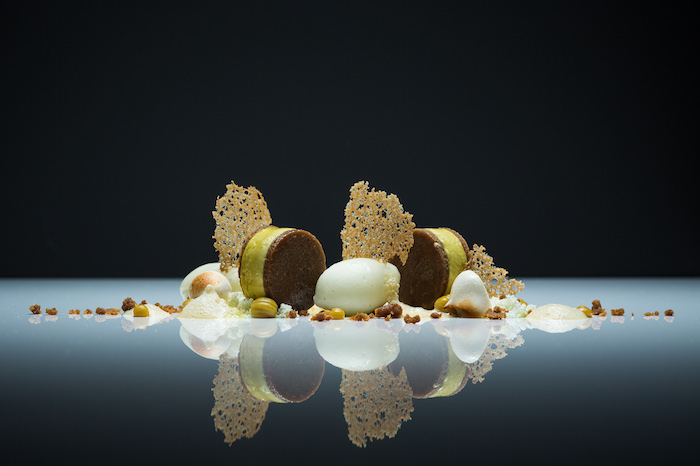 Renowned chef Jason Tan from Singapore’s Corner House (currently ranked No. 23 on Asia’s 50 Best Restaurants 2017) arrives at Hotel Icon this October for an exclusive pop-up to showcase his signature “gastro-botanica” cuisine — think lots of meticulously sourced meats, seafood and botanicals. Diners will have a chance to meet the young chef and hear more about his inspiring story during a special meet-and-greet prior to the dinner, accompanied by a Champagne toast. Set in Hotel Icon’s lobby restaurant Green, the lush botanicals and vertical green wall provide a fitting backdrop to Tan’s nature-inspired cuisine, while gourmet coffee and petit fours crafted from Tan’s own ethically sourced botanicals round out the memorable evening.

Chef Vs. Pan at La Paloma 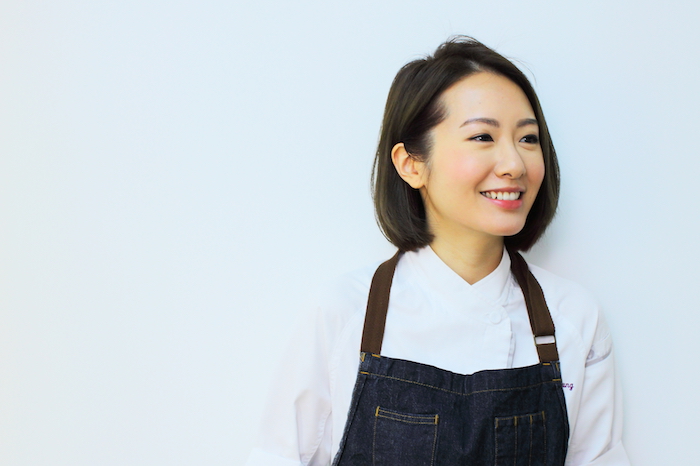 The Chef vs. Pan Brunch Series at La Paloma is returning this month with the spotlight on TV chef, columinst and cookbook author Hilda Leung. Taking on the 40-inch paella pan at Sai Ying Pun Spanish eatery La Paloma, chef Leung will create her version of the perfect paella, working alongside La Paloma head chef Jose Cotes to serve the ravenous brunch crowd. Meant to highlight the visiting guest chef/restaurant’s signature dishes as well as La Paloma’s well-loved tapas, the Chef vs. Pan series has been one of the hottest collaborations of the summer, with previous chefs including Anthony Burd from Mercato and Yong Soo Do of modern Korean joint Bib ‘n’ Hops. Running from 12–3pm, the menu is priced at HK$348 with the option of free-flow for HK$180 extra. 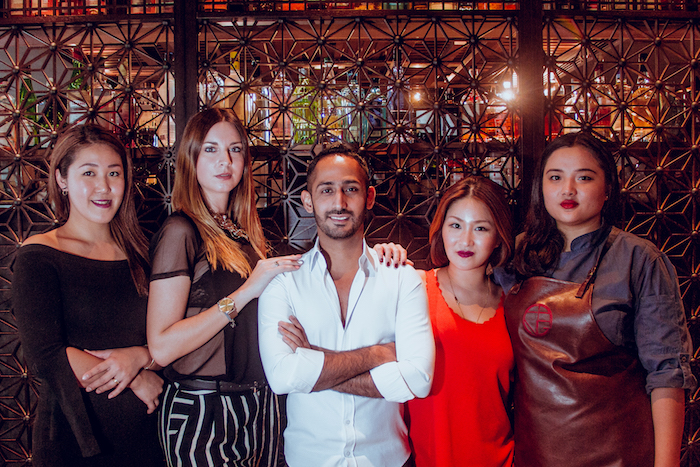 If you haven’t yet been to new pan-Asian eatery Fang Fang, you’ll want to mark your diaries this month for a special event taking place on 4 October. Coinciding with Breast Cancer Awareness Month, Fang Fang will host a special guest bartending event for one evening only, with 40% of all proceeds from drinks going towards the Hong Kong Breast Cancer Foundation. Shining a spotlight on women, Fang Fang’s Beverage Specialist Sandeep Hathiramani will shake up cocktails alongside four female bar professionals, each one crafting two special cocktails for guests to enjoy on the night. The special guest bartenders include Cherry Lam, Brand Ambassador of Diageo; Isabella Vannoni, Brand Ambassador of Proximo; Imelda Ng from Blue Bar at the Four Seasons Hotel Hong Kong; and Fang Fang’s own bartender, Apsana Rai. 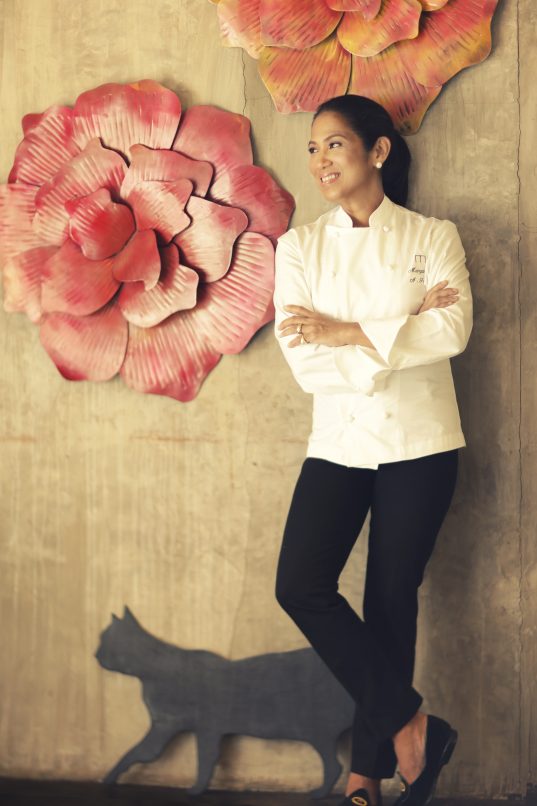 Last month, Asia’s Best Female Chef 2016 Margarita Forés was in town for a collaborative dinner with chef Peggy Chan at Grassroots Pantry, and this month she’s coming back for one more. This time the action is taking place at Michelin-starred VEA, where Forés and chef Vicky Cheng will work together on an eight-course tasting menu that will be available for two nights only. The menu has yet to be finalised, but you can expect chef Forés to present authentic flavours from the Philippines alongside chef Cheng’s signature blend of Cantonese classics with traditional French technique. 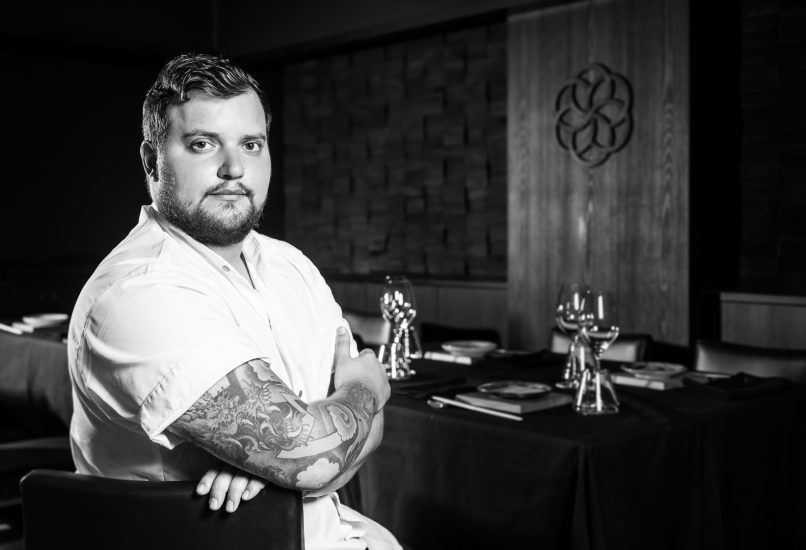 “Curated” by three-Michelin-star chef Hideaki Matsuo (of Kashiwaya in Osaka), HAKU Is one of our favourite new openings of 2017, so we’re looking forward to a special dining event at the end of this month. Chef Matsuo himself will be in Hong Kong to present a two-night collaborative dinner in partnership with HAKU’s executive chef, Agustin Balbi. With a theme of “Changing Seasons”, the menu will reflect the transition between autumn and winter, which means plenty of premium produce from Japan’s fall harvest, including chestnuts, pumpkin, squid and Hokkaido scallop.