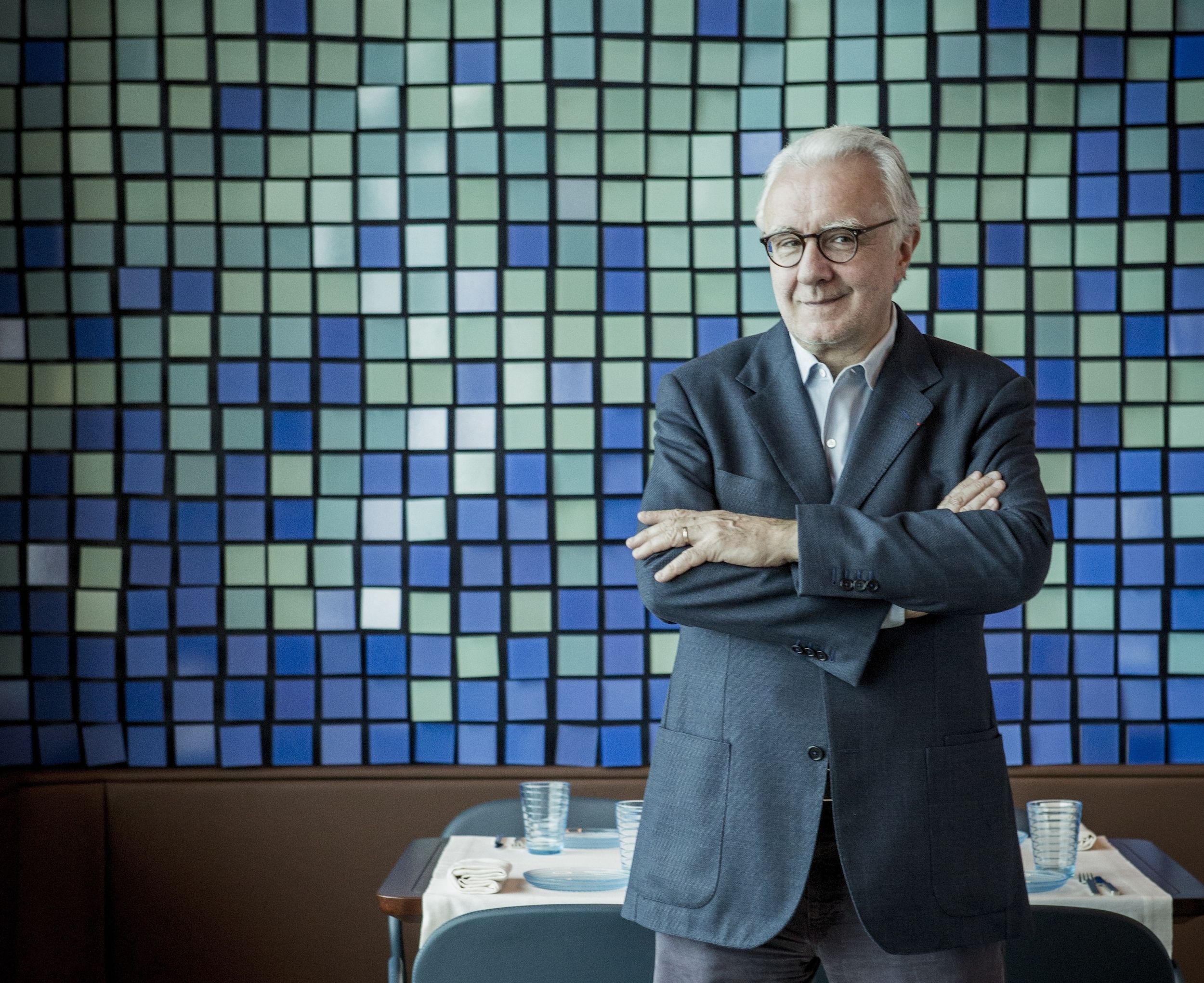 He’s perhaps the most decorated French chef of our time, with a total of 18 Michelin stars spanning 25 restaurants located in seven countries around the world. In addition to restaurants, his empire encompasses a training and consulting  branch, events and catering, a cooking school, a multitude of cookbooks, and even luxury inns and hotels.

Alain Ducasse was the youngest-ever chef in France to gain three Michelin stars at the age of 33, and now, almost three decades later, his restaurants still adhere to the precision and meticulous technique of French cooking that sees the awards and accolades continue to pile up year after year. For a chef that’s been deemed the “godfather” of French cuisine, on par with culinary giants such as Paul Bocuse and Auguste Escoffier — the question begs, what else remains?

While he was in town to open the world’s second outpost of Rech by Alain Ducasse (at at the InterContinental, Hong Kong), we sat down with the revered French culinary icon to reflect on the achievements of his career, discuss the challenges of bringing a Paris institution to Hong Kong, and debate the future of classical French cooking.

[Note: This interview has been translated from Alain Ducasse’s native language of French.]

Tell us about growing up in France, and some of your earliest childhood memories of food.
I was helping my grandmother to do the cooking from a young age, and when I was still a child around 12 or 13, I would say I was already acting and talking [like a chef]. When I was growing up on the farm, I was sent in the morning before lunch to pick the ripe vegetables and some eggs or whatever was available, directly from the soil, and my grandmother would do the cooking. So this link between nature and food and family… it’s what really made me feel like turning this into a profession.

Who were your biggest culinary idols at the time?
It was the chefs who I would end up working for… At the time when I was starting, I would read articles which were referring to Gaston Lenôtre for pastry, Roger Vergé, Michel Guérard… Alain Chapel, so I was really looking forward to meeting them and working with them to learn about this cuisine. I ended up being able to work with Guérard first, then with Vergé, then Chapel, and while working with Chapel I was learning pastry with Gaston Lenôtre himself. Lenôtre, one of the most famous pastry chefs in the world, taught me how to make croissants.

How would you say your cooking or food philosophy has evolved throughout a three-decades career?
Of course there is an evolution but there is no revolution; my cuisine has always been centred on the produce, because of my childhood and working with what I know, like the basics of the cuisine, the right gesture, the right technique… and mastering that. It’s about applying the right produce with a particular attention to sourcing, and using this base of techniques and ingredients to turn it into food that is very accessible… when you read it, when you taste it, it’s crystal clear. This has always been my line, my direction. Now, years later, I’m also becoming more conscious of how food can influence health — so we’re concentrating on using less salt, less fat, less sugar in our preparations and the way we create our dishes today.

Would you still define French as the great cuisine of the world?
What is new is that in the past 10 years all the cuisines are raising up, the world of dining is raising the bar, but French cuisine is accompanying this race, you see what I mean? You hear about Peru, you hear about Spain, you hear more and more about Italy, you hear about many countries you would not have suspected — you’re hearing about Hong Kong! There are lots of new countries. Before, you would hear about France because we had the history, we had the past… we started earlier. But we’ve kept rising, we are still here. The only difference is that other countries are also producing just as interesting food.

And you know why that is? It’s because the consumer is becoming more and more savvy, he is the one that is giving us the direction, and making us better and more competitive everyday. But that’s you, as the diner, going to the restaurant and being more savvy, reading the magazines, going on food blogs, whatever. It’s become really a hobby… so now it’s really interesting for the environment surrounding the chef, everything is becoming so quick and rapid that now we all have to be better every day.

Let’s talk about Hong Kong for a moment. Do you have any special connections to the food here, or favourite restaurants?
I’ve been going to a restaurant called Ho Lee Fook, led by Jowett Yu, and I’ve found his cuisine as an interesting integration of multiple cultures. The result is very exciting. And also the Chinese restaurant, Yan Toh Heen here at the InterContinental — it’s classical Cantonese and the food is also very good. These two are very different types, one modern and one classic Chinese, but both very memorable.

What was the reason for replacing your restaurant SPOON with Rech here at the InterCon?
SPOON opened 14 years ago, and the time had clearly come for a change, so we started discussing with Claus Pedersen, the General Manager here. When we took Claus to Paris showing him the different restaurants we owned and operated there, I had already this idea in mind but wanted to have his opinion. We got to be on the same page that opening Rech (a restaurant we took over in Paris in 2005) would be the right proposition here in Hong Kong given the strong interest for seafood.

But we didn’t want to do what was already available, so we thought about the French experience and how we could bring to the table new ways of experiencing seafood, and importing fresh oysters, some type of seafood and fish, directly from Europe and turning it into our own creations. With my personal interpretations and [head chef] Stéphane Gortina’s execution, it’s a modern way of seeing seafood here in Hong Kong. It was the right place, the right time, and the location opening up onto the harbour couldn’t be better.

Can you tell us what’s special about the Hong Kong branch?
We are looking at Rech Paris to develop Rech Hong Kong, but with some little twists based on the sourcing, the produce, and Stéphane’s interpretation in terms of the dishes and structure of the menu. Chefs like Stéphane who train with us for 10, 11 years, we encourage them to see, to travel, to experience a different type of cuisine and way of working with produce, culture, preparation, techniques. This gives them a wide array of capabilities and allows them to express themselves, whether it’s bistro-style or fine dining. That makes an Alain Ducasse chef, and Stéphane is one of them. We’re vey proud of him.

Along those lines, what are some of the main traits you look for when hiring young chefs at your restaurants?
Good technique, passionate, curious. Able to understand and preserve what they have learned, to keep what they’ve learned, and to adapt to different types of produce, culture, customers… this is what chefs like Stéphane are about.

Your empire extends far beyond restaurants, encompassing cookbooks, cooking schools and everything in-between. Do you identify yourself now as more of a businessman or a chef?
I consider myself a creative director, or artistic director, the same as you would have in fashion, defining everything from the whole story of a restaurant including the table design, food, and even the logo and graphics elements. For example, finding the artist Jean-Pierre Guillero who did the prints on the walls here, using the ancient Japanese [fish printing technique] of “Gyotaku”. We loved his creations so much that we had the idea to make some plates here using the reproduction of Jean-Pierre’s work. I also made the choice to use Marie Deroudilhe, as we worked together on Rech Paris and now Rech Hong Kong, and so on and so on. I produce the creative vision for everything that relates to the restaurant, and everyone [my staff] is going on this great voyage together.

Do you still find time to cook at home, and what is your favourite thing to cook on a day off?
Cooking at home? Yes, yes, yes. Going to the vegetable garden and the market and whatever I find in nature, from what the fisherman has brought me… I will use that to cook whatever. The chef is just the translation between nature and what appears [on the plate].

Out of everything you’ve accomplished, what are you most proud of? Is there any stone left unturned?
I’m ready to pass on my knowledge. The goal is to continue passing on what I have learned, and what I’m still learning today through my curiosity that allows me to capture sources of inspiration and transform them into something of my own. So taking that and sharing it with all my collaborators and the team, that’s really what my motivation is, that’s what makes it so wonderful and enjoyable every day. And I’m having a lot of fun.

So there are still ideas and plans to open new restaurants?
Yes, still so many ideas. I see myself continuing to give the enterprise the fuel and engine that allows us to grow.

Where do you turn now for new inspiration?
The environment, what I see, it’s permanent curiosity, questioning journalists on what they love, their favourite places… It goes both ways, I nurture people from what I see and also what I’ve been given, it’s an exchange… And then I transform it into something of my own always.

You were the youngest French chef to win three Michelin stars. Last year, you regained your third Michelin star at Plaza Athénée in Paris. Do these accolades still excite you?
Yes, it’s still very much the same excitement as back then! Awards and accolades still make me and the team very proud.

Rech by Alain Ducasse is now open for lunch and dinner at the InterContinental Hong Kong.

Dining French Cuisine Restaurants French Restaurants People InterContinental Hong Kong Chefs Interviews Alain Ducasse Scene Michelin Chef Interviews Rech by Alain Ducasse
Leslie Yeh
Editor in Chief
Having worked as a lifestyle editor for almost 10 years, Leslie is thrilled to be writing about the topic she loves most: wining and dining. When she's not out pounding the pavement for the latest new restaurant opening or tracking food trends, Leslie can be found at home whipping up a plate of rigatoni vodka and binge-watching Netflix with a glass of Sauvignon Blanc in hand.
Dining Restaurants Food Trends Drinks Travel
Sign up for our newsletters to have the latest stories delivered straight to your inbox every week.