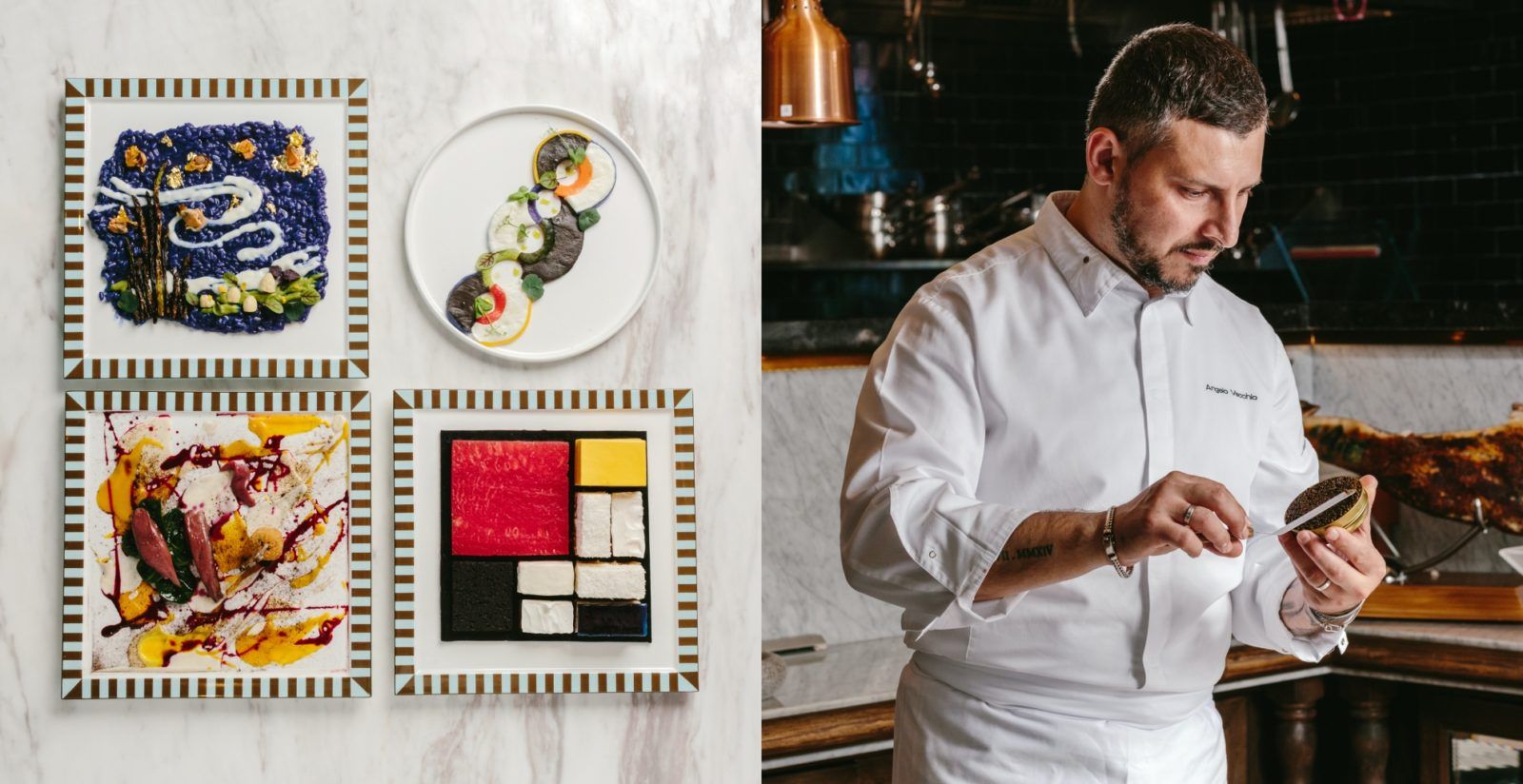 No time like art month where the expression “looks too good to eat” rings truer than ever — where in some cases, like this particular one with Aria, you’ll actually be able to. After consecutive seasons of disappointing cancellations, Hong Kong’s Art Month makes an intrepid return to this city, with signature exhibits, Art Basel and Art Central, scheduled to showcase at the end of May.

Elsewhere, in Hong Kong’s F&B scene, recovering restaurants from intermittent closures and restrictions are bringing back the well-missed tradition of art menus. One such venue? Aria Italian at California Tower, which, while usual dishes of fine-dine Italian fare already resemble masterpieces of their own, adheres to a timely, much more obvious brief by recreating four notable artworks of celebrated names.

“As an Italian, we are proud that our country has been the cradle of many artistic names,” shares executive chef Angelo Vecchio of the limited-time menu. “I have the honour of being able to associate food with art thanks to the Italian artist Filippo Tommaso Marinetti, who in 1909 formed the avant-garde Futurist movement, which has been an inspiration for many people to come. Now I pay tribute to what our ancestors invented a century ago, reproducing a gorgeous piece of art into something that you cannot just look at, but also eat and taste, making the dream not only visible to your eyes but tangible to your mouth.”

Conceptualised by executive chef Angelo Vecchio, the four-course “An Art Menu by Aria”, available from 27 to 29 May, features the works of Robert Delaunay’s 1934 Endless Rhythm, Vincent Van Gogh’s famous 1889 The Starry Night, Jackson Pollock’s 1952 Convergence and Piet Mondrian’s 1921 painting, Tableau I. Each dish is a detailed, admirable replica of the original that succinctly captures each artist’s distinct modus operandi sidled with Aria’s rota of premium produce and Vecchio’s culinary finesse.

From the white-washed walls of pristine galleries to porcelain plates, “Starter by Robery Delaunay” mirrors the alternating hemispheres of the Orphism Movement with cucumber, mozzarella, bell pepper, pickled pumpkin and portobello mushrooms, while “Risotto by Vincent Van Gogh” captures the fervent brushstrokes through a butterfly pea risotto “sky”, animated by white and green asparagus, mussels and lemon.

“Pigeon by Jackson Pollock” follows the expressive splashes, drips and paint pours with a similarly experimental plating of pigeon prepared two ways — perfectly pink seared and crispy fried lollipops — scattered amongst a splattered canvas of beetroot, pumpkin and Jerusalem artichoke (topinambur) sauces with a touch of green from the artistically fanned out spinach. The menu closes with “Sweet by Piet Mondrian”, referencing the iconic abstract colours and asymmetric compositions of the original through carefully measured pieces of cut-up cakes, pastries, chocolates and fruits with a medley of desserts. Wine pairings are also available.

Hong Kong aria italian Vecchio Angelo art menu
Lorria Sahmet
Editor
After two years writing in luxury retail, Lorria now covers food and drink happenings in Hong Kong. When not taste-testing for the best fries in the city (shoestring, always!), find her cosied up at home skimming through Netflix or nurturing baby plants in her indoor greenhouse. She is happiest by the ocean with a giant fishbowl-glass of Aperol Spritz.
Food Drinks Culture Living Hong Kong
Sign up for our newsletters to have the latest stories delivered straight to your inbox every week.