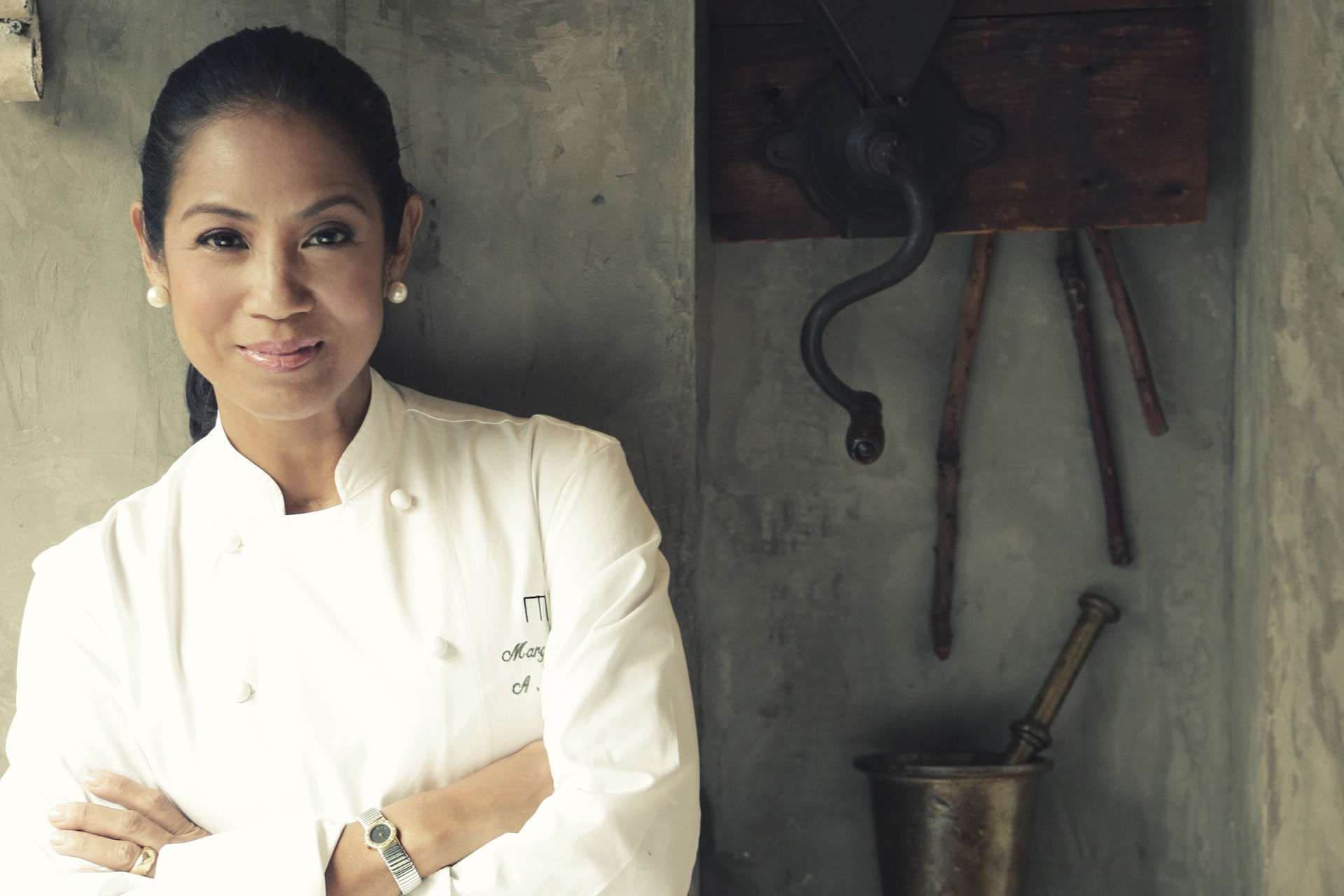 From her humble beginnings as an untrained home cook who flitted off to Italy on a whim to learn cooking at the age of 27, chef Margarita Forés has come a long way: she’s grown her original catering company to international recognition, served several global heads of state (including the Japanese emperor and President Obama), opened the only Asian branch of renowned Italian culinary centre Casa Artusi, and currently oversees four F&B concepts, including an 11-outlet casual Italian chain Cibo.

Oh, and did we mention she snagged the title earlier this year of Asia’s Best Female Chef 2016 by the prestigious Asia’s 50 Best Restaurants awards? Arriving in Hong Kong for a two-day pop-up this weekend in collaboration with Casa Artusi, Forés spoke to Lifestyle Asia about her cooking philosophy, love for both Italian and Filipino cuisines, and how it feels to join Asia’s innermost circle of elite female chefs.

Where did your love of Italian cooking stem from?
I was born and raised in the Philippines, and in 1971 my family went into political exile to New York because of the Marcos regime at the time. New York was a wonderful place to be as a teenager growing up, the ultimate melting pot. I went to high school there, came back to Manila for college, lived in Hong Kong for two years, then found myself back in New York in 1984. At that time, it was kind of the “Italianization” of the city, there were a lot of Italians setting up restaurants there — from the red-sauce restaurants to the more Northern-influenced places doing risottos, cream-based pastas and thin crust pizzas — and as a young girl that was very impressionable at the time, my interest was piqued.

Tell us about your time spent in Italy?
I had this desire to go to Italy and find someone who could really teach me Italian cooking, so in the fall of 1986 I left for Florence. I had a friend there who I asked to find me a teacher. Maybe it was providential that instead of a formal cooking school, she found an Italian signora who was cooking out of her home. It was great because I learned the basics with just a few other young girls, and on Sundays, we would go to the market and get immersed in the wonderful produce. Afterwards, I found two other signoras to teach me, one in Rome and one in Milano. So, I really learned from three Italian mamas!

What was your first big break in the industry?
Back in Manila, I started off doing small private catering jobs. Eventually, the Hyatt in Manila approached me to do an Italian festival at their restaurant Hugo’s. At that time, the food and hotel industries were entirely male-driven and it was hard for me to break in — but I came from a really unique background, and I guess it made for good copy? They made a big deal of putting my picture in the papers, but I didn’t know if the chefs there really thought I could cook. I recall one incident when I came back into the kitchen and saw the cream sauce I was working on had been thickened with a roux, I got really upset, and I think at that point they kind of realised I knew what I was doing! Luckily, the festival was a huge success.

Was it a straight ride to the top?
Not at all. I worked for 8-10 years doing private catering, and during this period I really learned what it takes to be successful in the kitchen — a whole lot of discipline and responsibility and structure in your routine that I didn’t have at the time! I was still a young chef, mainly concerned with partying, and it really took me 10 years (and having a son along the way) to buckle down and decide this is the business I wanted to pursue.

How do you think your cooking philosophy has evolved?
I now have 11 outlets of Cibo, a Champagne bar called Lusso, and a farm-to-table concept called Grace Park. I’ve really evolved from just cooking Italian food at the start to putting my own spin on the cuisine and having that real respect for the ingredients. I’ve also focused on developing relationships with organic farmers so that we can collect all our beautiful ingredients in the Philippines and celebrate them.

Do you think there’s a prominent place for Filipino cuisine on the world stage?
Filipino cuisine is really seeing a great resurgence today. We really weren’t so proud of our cooking before, and it’s only recently that we’ve changed the way we feel about our cooking after having a colonial mentality for so long. We in the industry have done a lot of work in the last decade, helped along by our tourism and agriculture boards asking us to participate in trade fairs and chefs conferences around the world. The buzz in turn is encouraging Filipino communities in other parts of the world to come out and proudly display our food. It’s taken us a lot longer compared to other Asian cuisines, but I guess there’s a time and place for everything. Now Filipino cuisine is designated as one of the big food trends of 2016.

What can we expect at the Hong Kong pop-up?
This is a new initiative organised by Casa Artusi and the Italian government to promote Italian cuisine worldwide. Because Hong Kong is so close to the Philippines, it was easy for them to get us here. I’m so excited to cook in tandem again with chef Carla Brigliadori and it’s so nice in Hong Kong because you can get nearly everything you need to cook Italian food in the most authentic way. It’s great to be back in this vibrant foodie city.

Any specific dishes we can expect?
The book we’re cooking from, “Science in the Kitchen and the Art of Eating Well” [written in 1894 by Pellegrino Artusi], has 794 dishes and I think chef Carla and I are doing about eight of them — there’s pasta fresca, vitello tonnato and some other iconic recipes from the book. Its great to be able to do these recipes in 2016 from a book that was written so long ago — it’s a real trip through history and shows how timeless Italian cuisine is.

What is one Italian dish could you have over and over again?
Probably a good traditional ragù. Every region has its own version, but it’s the ultimate heartwarming dish. I think it’s a dish everybody can fall in love with, it just reminds us of home cooking and the comforts of family.

What’s the next step for you after such a great achievement?
Well after winning this award, I realised yes, you can actually make all your dreams come true! Being able to bring my work outside of the Philippines is probably on the top of the list. I’m looking at a few Asian cities at the moment — probably Singapore and if I’m lucky, Hong Kong.

Dining Restaurants Italian Pop-up Restaurant Asia's 50 Best Restaurants Pop-ups margarita fores filipino asia's best female chef
Leslie Yeh
Editor in Chief
Having worked as a lifestyle editor for almost 10 years, Leslie is thrilled to be writing about the topic she loves most: wining and dining. When she's not out pounding the pavement for the latest new restaurant opening or tracking food trends, Leslie can be found at home whipping up a plate of rigatoni vodka and binge-watching Netflix with a glass of Sauvignon Blanc in hand.
Dining Restaurants Food Trends Drinks Travel
Sign up for our newsletters to have the latest stories delivered straight to your inbox every week.