Best Bites: The top 10 dishes we ate in December

Food & Drink
Best Bites: The top 10 dishes we ate in December
Share this article
Next article

Best Bites is a roundup of the outstanding dishes we had within the month which renewed our love for established venues, caught our attention from a new opening, or impressed on us again the creativity and skill of Hong Kong’s talented chefs. From casual street bites to meticulously prepared tasting menu dishes, these are the plates we’d recommend you make a special trip for. 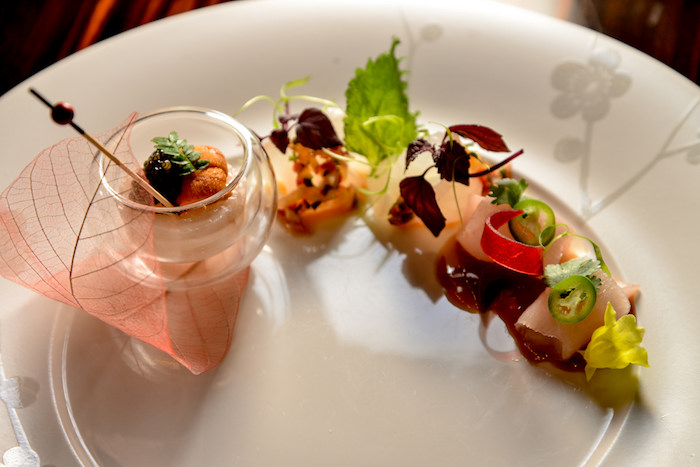 The iconic Nobu’s 10th anniversary set menu was a reminder as to why celebrity chef and restaurant owner Nobu Matsuhisa is still one of the highest regarded Japanese chefs in the world — made even more memorable by the fact that Mr. Nobu-san was personally there to meet, greet and serve us with his jovial, infectious manner. The selection of palate openers was beautifully presented on a plate designed by the master of sushi himself, with the elegant and artistic plating stimulating my senses before the first bite was taken. As I made my way around the half-moon, the freshness of the ingredients and harmony of flavours took my taste buds for a ride, from the beautiful pairing of botan shrimp tartar and uni with the salty pop of caviar to the perfectly sliced strips of hamachi and grouper sashimi, adorned with purple, yellow and green petals and leaves to make the colours pop with the season. —Leslie Yeh, Dining Editor 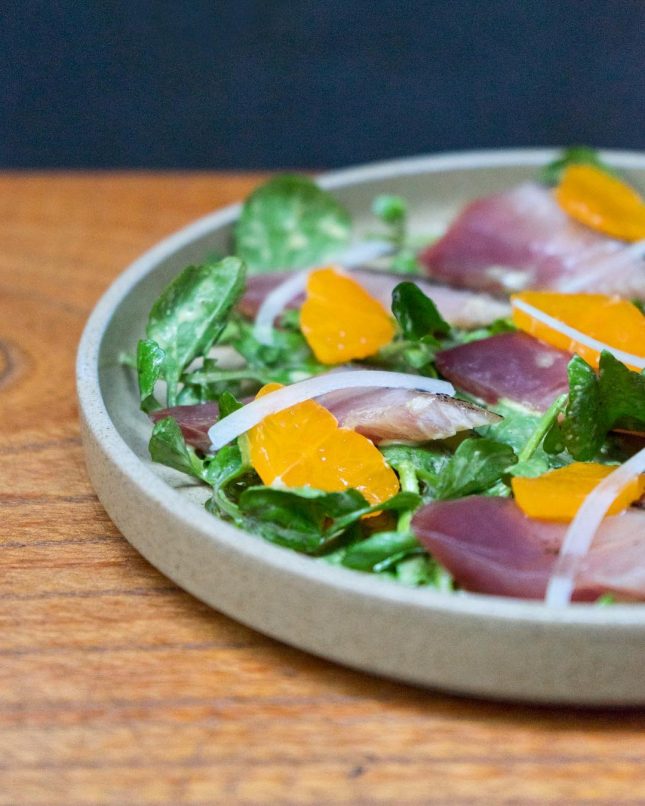 Dinner at Rōnin is always a special affair, and I spent my most recent meal there eating a lot of old favourites on the menu, from the KFC sawagani crab to Kagoshima beef with maitake and egg yolk. One exquisite new dish — new to me, at least — was a fresh watercress salad dressed with bonito sashimi, pickled mandarin, and a Japanese vinegar called tosazu (HK$180). Light and bright and tangy, this dish captures precisely what the kitchen staff at Rōnin do best: unexpected combinations of high-quality ingredients that add up to something greater than the sum of their parts. My only regret is that I had to share this plate with two friends. —Michael Alan Connelly, Editor in Chief 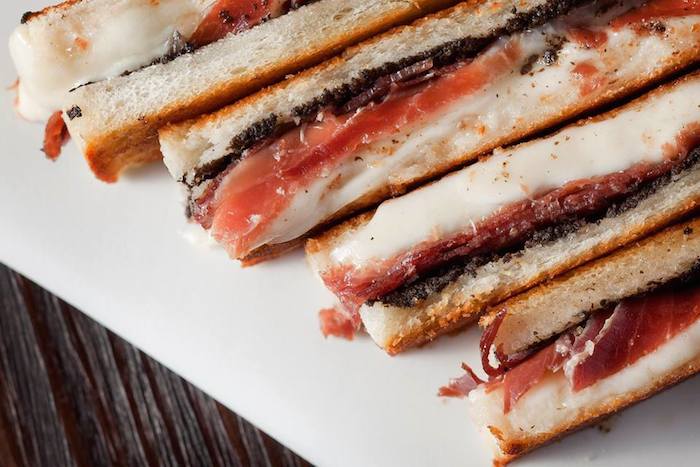 New doesn’t always mean best, and sometimes there are versions of dishes around town that just can’t be beat by any glitzy newcomer. I was reminded of the simple perfection of a crispy and delicious ham, truffle and cheese bikini toastie (HK$135) during a recent meal at Catalunya, who serves up the Spanish snackers as one of their signature starters. It’s by no means a new, out-of-the-box creation, but Catalunya executes the bite-sized Spanish sandwich to a tee, with the crispy and buttery — yet not overwhelmingly oily — golden-brown toast sandwiching a layer of melted mozzarella, truffle, and Iberico ham shavings, all compiled in a thoughtful ratio. The toastie crunches satisfactorily as you bite into it, giving way to an gooey, melted cheese center, with the saltiness from the ham rounded out by the earthy, aromatic truffle. The toasties come in portions of four, but who can blame you for polishing off a plate by yourself? —LY 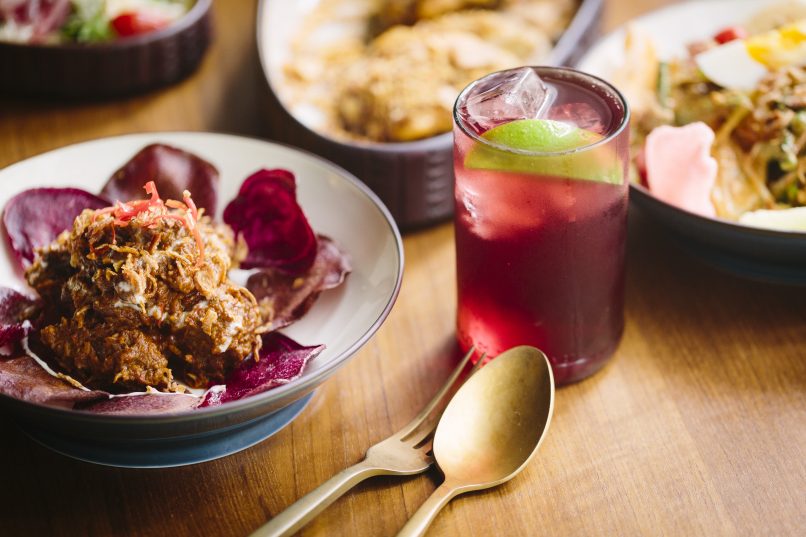 In spite of all the fanfare it received when it opened last spring, my first taste of Indonesian food at Kaum, tucked away inside Potato Head Hong Kong, wasn’t until just the very end of 2016. What a shame, because clearly I’ve been missing out on some very good food. Pretty much everything that hit the table during the meal was incredible, but one highlight was the rendang daging sapi (HK$80), a small plate of braised beef with red beans in a coconut milk sauce. Unbelievably tender, the beef had an exotic flavour thanks to mixed Sumatran spices, but all the familiar comforts of a warming stew. This tasted great with rice, but I’d happily eat spoonfuls of it all by itself. —MAC 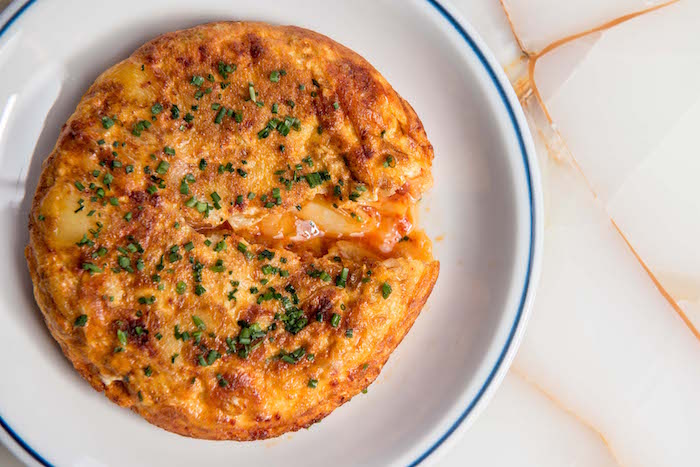 Spanish restaurant Cassio, with food by London-based tapas joint Barrafina, was one of the best new restaurants we tried this month, both in terms of the dishes and the decor. While I enjoyed nearly all the tapas our table tried, one of the best bites of the night had to be the signature tortilla omelette, of which Cassio serves several varieties with ingredients that change periodically. The Iberico sobrassada (HK$98) is a constant on the menu and a must-try, featuring an almost-liquid center from the soft sobrassada sausage melting into the runny Japanese eggs that are just barely cooked. The pancake-sized disc is light and fluffy as any good omelette should be, bearing a browned outer layer that holds in the filling nicely until you dig in with a fork and unleash the bright red centre. Soft potato chunks, onions and plenty of herbs adds layers of flavour and texture to this ultimate comfort dish. —LY 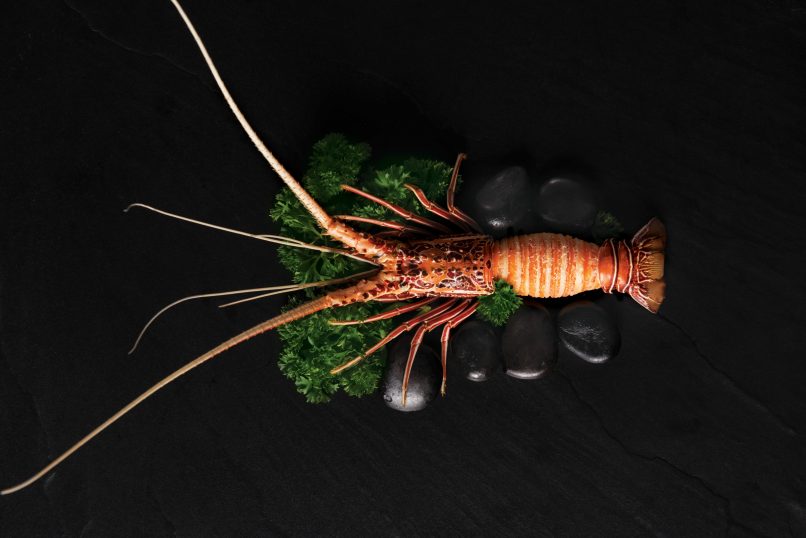 Like its sister restaurants Yum Cha (the one with the googly-eyed dim sum) and Urban Park, Dragon Noodles Academy takes presentation very seriously, with dishes either meticulously prepared table-side or with some very interesting trompe d’oeil effects for some of the most Instagrammable Chinese food in town — perfect for those of you who unabashedly ‘eat with your camera first’. Without compromising on flavour at all, the crispy lobster puff (HK$69 per piece, with minimum order of two pieces) is the perfect snap-worthy appetiser. Here, mimicking the humble sweet turnip puff that you might find at your local dim sum joint, the pastry has evolved into dragon-like proportions by presenting it as a whole lobster for every order. Painted orange with carrot juice, the crisp, airy layered pastry closely resembles the lobster tail. Indeed, it contains one full plump lobster tail in every plate, providing sweet succulent meat in every mouthful, balanced by coriander and winter chestnuts, which also add some bite. —Evelyn Lok, Associate Editor 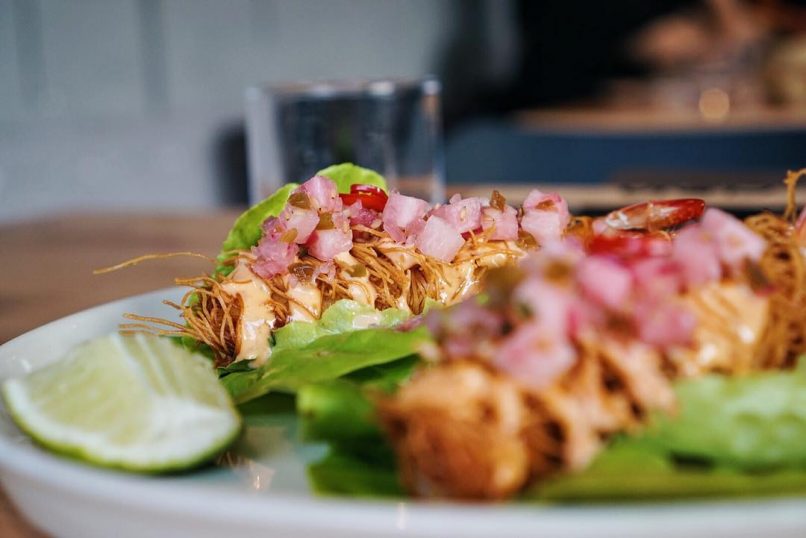 Mexican food is near and dear to my heart — and often disappointing in Hong Kong — so I was pleasantly surprised by the execution of every single plate at Chino in Kennedy Town. One standout dish from a recent meal was katifi shrimp with butter lettuce and pickled jicama — basically a fish taco but better. The shrimp is wrapped in a pastry shell and then fried, with the lettuce and jicama adding a contrasting freshness. With a squeeze of lime and a delicious sauce drizzled on top, this was so good that I didn’t mind it not being served on a tortilla. It should be the start of any meal at Chino. —MAC 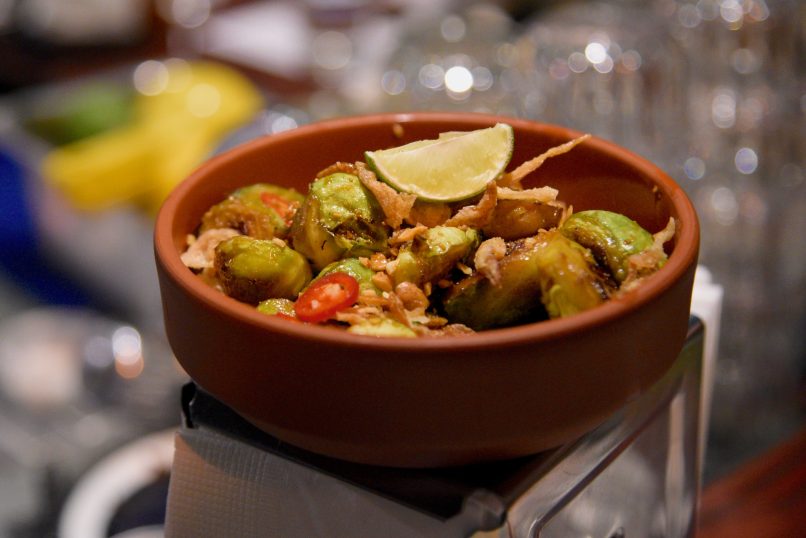 Given all the excitement over May Chow recently being named Asia’s Best Female Chef 2017, I recently stopped into Little Bao on a crowded Friday night to try the menu for the first time. I’m sure the baos have their fans, but for me, the reason to go back is the delicious serving of Brussels sprouts (HK$88). A decade ago, chef David Chang introduced his iconic fried Brussels sprouts with fish sauce vinaigrette at Momofuku Ssäm Bar, and to this day it’s one of my favourite things to eat when I’m in New York. Chow’s version has all the sweet, salty, spicy and sour and goodness of Chang’s original, but she ups the texture game with the addition of peanuts and fried shallots. This is one of my new go-to vegetarian dishes in Hong Kong. Maybe it can be turned into a bao, too? —MAC 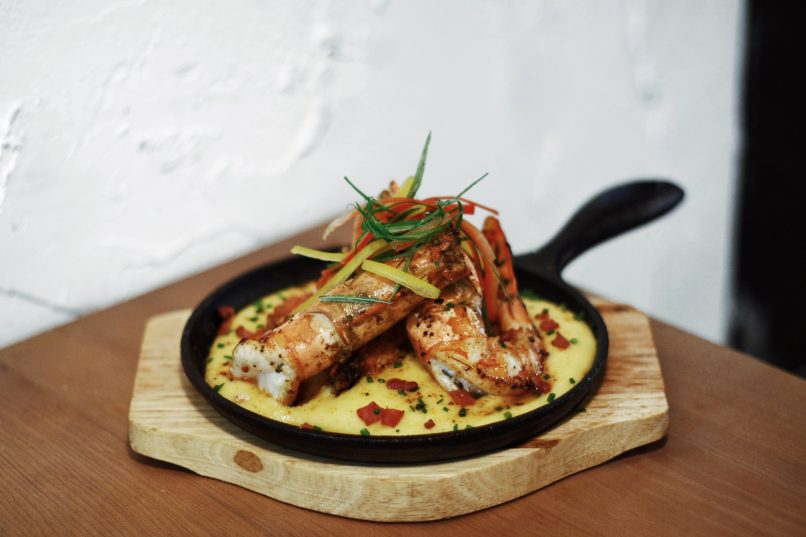 The dish: Barbecue shrimp and grits

Fresh off a trip to New Orleans — ground zero for amazing shrimp and grits — I was extremely sceptical about the version I would find at Moonshine & The Po’Boys. I’m happy to report, however, that their barbecue shrimp and grits (HK$128) ticked all the right boxes for me. The flavour of the seafood was excellent, and the grits achieved a sinful level of decadence thanks to the addition of bacon, garlic butter and Parmesan. This might not be how they make shrimp and grits in N’awlins, but that doesn’t make this version any less delicious. —MAC 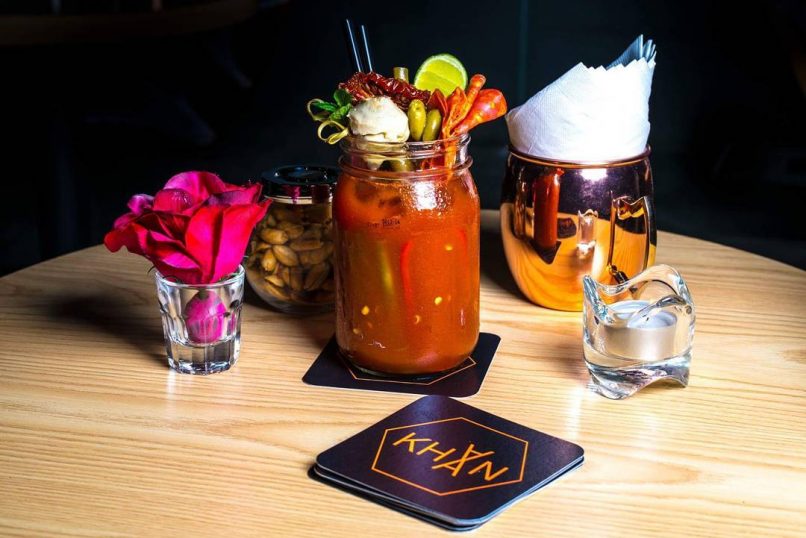 Normally I wouldn’t include a cocktail in a list of the best things I ate in a given month, but I’m making an exception for this one. At the neighbourhood bar Khan in Soho, Mo’s Miracle Bloody Mary is more than just a drink — it’s a solid snack. Made with homemade Bloody Mary mix (ask for it spicy) and Bengali lime, this showstopper is topped off with an elaborate antipasti garnish of cheese, olives, cured meats and sun-dried tomato. I usually limit Bloody Marys to brunch hours, but this might just be my new favourite post-work bite. —MAC