Food & Drink
Best Bites: The top 10 dishes we ate in January 2019
Share this article
Next article Fresh from New York City, Venezuelan-born chef Nelson Gonzales has just taken over the post as head chef at Al Molo in Harbour City, spearheaded by internationally acclaimed chef Michael White. While it’s safe to say Gonzales knows his way around meats, seafood and classic Italian appetisers — he’s spent the past six years training under White’s Altamarea Group at Michelin-starred Ai Fiori — his passion and technical expertise shines through most in the homemade pastas, which have been completely revamped on the menu with eight new additions. The casarecce (HK$198) is an absolute treat: The thin twists of pasta are tossed with calamari in a similar colour and shape for a tongue-in-cheek twist, complemented by a blanket of garlicky bread crumbs and fresh radicchio. —Leslie Yeh, Dining Editor Hidden away at the top of H Queen’s, a world of culinary wonder awaits diners at Écriture, the rare restaurant to receive two Michelin stars less than a year after opening. The space is lovely and the service is spot on, and executive chef Maxime Gilbert and his kitchen team are firing on all cylinders, as a recent meal there revealed over many courses — all of which could easily earn a place in this column.

The one dish I keep going back to over and over, however, is the caviar course (HK$688 on the à la carte menu), which involves a bit of surprise and tableside magic. Unbeknownst to diners, a layer of Schrenki caviar rests between two sheets of Spanish air-dried beef  on a platter placed next to the table near the start of the meal, the eggs slowly absorbing some of the meat’s flavour. Just at the right time, the caviar is revealed to diners, just before being served atop a bone marrow soufflé with Chinese celery, clam sauce and parsley oil. Savoury, unctuous and decadent, this is a knockout dish that perfectly encapsulated chef Gilbert’s approach to cooking, and one that makes me keen to return again soon to discover more gastronomic delights. —Michael Alan Connelly, Editor in Chief First things first: My recent dinner at Aulis Hong Kong was one of the finest meals I’ve ever had in this city. Everything from the pacing of the courses to the purity of the flavours to the beautiful presentation of each dish was top notch. There’s a confident style of cooking on display here, one that prizes creativity and innovation without veering into preciousness. It’s haute cuisine without any fuss.

Now, a sea urchin custard is hardly revolutionary, but I’ll be damned if this wasn’t the best version I’ve ever had. The custard itself is creamy and delicious, topped with sea urchin roe and Simon Rogan’s specially reserved caviar from Petrossian in Paris, which has been amped up with the addition of Maldon salt and is thankfully free of the preservative Borax. This would be good enough as is, but what elevates it to the next level is a layer of pickled vinegar jelly on top of the custard, and the addition of sugar kelp cooked in its own stock. Each little spoonful — this one is worth savouring as long as possible — carried a crescendo of flavours that were perfectly balanced and utterly delicious. The menu will change often at Aulis, but I’m hoping this one will make a regular appearance in the lineup. —MAC 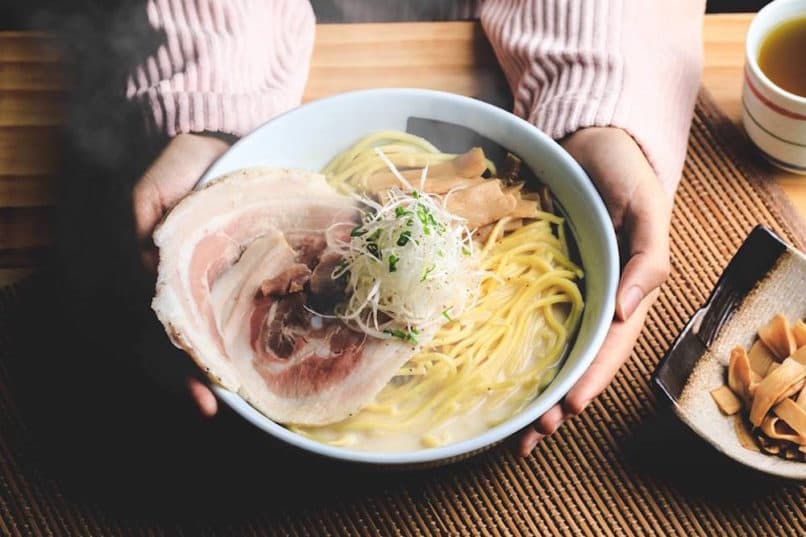 Arriving with impressive credentials, the newest ramen bar in town delivers a menu devised by not one, but two experts: Japan ramen champion Hayashi Takao, and recipe developer and ramen restaurateur Matsumura Takahiro. They’ve launched their chic new brand Ramen Cubism in a basement venue in Wellington, and luckily, the ramen here lives up to the hype, delivering one of the best new value-for-money deals in town. The simple one-pager lets you choose between several broths, all devised by chef Hayashi, whose flagship in Osaka sees daily queues of up to 100 guests.

While I found the Soy Soup slightly too salty after several mouthfuls (the succulent thick pork belly in this bowl is excellent, however), I’m a big fan of the White Soup, which blends Hayashi’s ‘secret’ ingredient, aigamo ‘rice’ duck and prized Tanba chicken for a slow-cooked broth imparting layers of flavour with an unctuous and silky mouthfeel. It’s the basis for both the Sky Bird (HK$88) and the Premium Cubism Bowl (HK$118) — the latter of which includes thin rounds of fatty pork draped around the edge of the bowl, crowned with a soft-boiled half egg and a tangle of fantastically chewy noodles. An order of signature dumplings (HK$38) is also a must. —LY

The dish: Sautéed prawn (now lobster) with scallop and sea whelk in chilli sauce
Peking Garden Star House is a unique example of a respected Chinese restaurant where you’ll find Chinese families and tourists alike in its prime Tsim Sha Tsui harbourfront location. Following an extravagant renovation, the storied restaurant has revamped its menu to match, featuring exclusive dishes only available at this branch. With stunning new presentations, there’s a clear effort to sate the appetites of this generation’s Insta-addicts. Thankfully, we found the restaurant’s attention to impeccable cooking no less divided. The signature Peking Duck, for one, is still as masterful as ever.

But during my recent visit, the star of the show was in fact the sautéed prawns with scallop and sea whelk in chilli sauce (HK$780), which requires advance order due to its painstaking presentation — plated up as an energetic floating dragon, with head and tail intricately carved from carrots. The Chinese name of the dish translates to “dragon king of the eastern sea,” which definitely instills more of a sense of awe, with premium ingredients to match. A medley of prawns so fresh and deftly cooked it crunches in the mouth; matched with sweet scallops and expensive sea whelk, all tossed in a sweet and moreish, lightly spicy chilli sauce that doesn’t overpower the delicateness of the seafood. The accompanying celtuce morsels balance out the sanguine colour as if the dragon’s body was adorned with jade pieces, and were absolutely delicious to boot.

On a more recent visit, we learned that the kitchen has replaced prawn with lobster chunks instead, which makes the price tag all the more well-deserved. Sure, the new dishes at Peking Garden Star House get a little ‘extra’ — but they’ll certainly impress your guests, who will be wowed by the spectacle, but will continue smacking their lips in approval of the fabulous execution. —Evelyn Lok, Associate Editor One of Hong Kong’s best new restaurants of 2018, Old Bailey serves Jiangnan cuisine in a beautifully designed space, flooded with natural light, inside the Tai Kwun complex. As I recently discovered, it’s a lovely venue for lunch on a sunny day, and even lovelier if you order my favourite dish: hairy crab roe and scallion oil noodles (HK$138 per person). The toothsome noodles are supplied from a local artisan, and they’re designed to soak up the sauce made with creamy roe from the hairy crab. If it sounds too rich and indulgent, know that the addition of scallion oil balances it all out and adds vibrancy to the palate. This is Chinese comfort food at its finest. —MAC 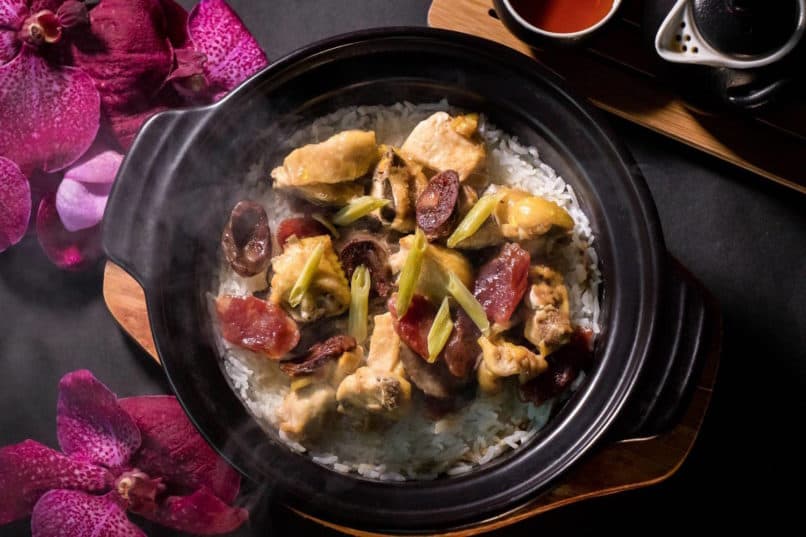 It may be unseasonably warm this winter, but the slight nip in the air has us craving comfort food meals from hotpot to Chinese claypot dishes. This week, I trekked over to Hotel Icon to try some of the new winter dishes on the menu there. The well crafted dim sum (and brilliant char siu) is always impressive, but my favourite dish of the meal by far was the chicken claypot (HK$268). Hearty and fragrant, local yellow chicken and preserved sausage added layers of flavour, while all the rice had soaked up all the residual juices and fat from the meat. The best part, however, was the bowl of browned crispy rice bits brought over in another bowl: instead of vigorously scraping the bottom of the pot, the kitchen had done the hard work for us, meaning we could indulge to our heart’s content on what is undeniably the best part of any claypot rice dish. —LY There’s no denying the inherent joys of cheesy pasta — it’s difficult to go wrong with that combo, really — but rest assured that the macaroni & cheese (available on the set lunch menu only) at Gough’s on Gough’s is anything but basic. To start with, the standard elbow-shaped pasta is replaced with large shells, all the better for clinging onto the cheese sauce. And what a sauce it is: A blend of four English cheeses, it’s rich and gooey in all the right ways. The pasta is topped with toasted breadcrumbs to add a welcome bit of textural contrast. Simply put: this is mac & cheese at its finest. Kudos to chef Cary Docherty for this comforting creation. —MAC Elementary burst onto the scene early last year and won foodies over instantly with its sunny bistro-style fare evocative of Australia’s sunny café culture. Recently in Tai Hang to try their lunch menu, I was thrilled by two dishes: The first was the chilli crab pasta, one of the restaurant’s best sellers with its irresistible mix of garlic, chilli and bread crumbs embedded in a tangle of angel hair pasta. But for something more out of the box, my vote goes to the duck heart kebabs (HK$88): kissed simply by the grill, a crunchy exterior yields to the pure, slightly gamey flavour of the meat, finished off simply by a sprinkling of parsley and a squeeze of burnt lime. It’s simple, sophisticated and most importantly, utterly delicious. —LY New Punjab Club has recently unveiled an updated menu along with new uniforms and artwork, marking the next stage for the recently Michelin-starred Punjabi restaurant. Chef Palash Mitra tends to the kitchen’s dual tandoor ovens with long-learned expertise to coax out an insane amount of flavour in his dishes, such as in the tandoori machli (HK$248), local line-caught cobia blanketed in a fragrant, spice-packed marinade. The yogurt in the marinade keeps the meat soft and tender, while a trip to the tandoor caramelises the exterior leading to a robust and irresistible crispy coating. While new additions such as roasted bone marrow and sweet paratha are a worthwhile reason to repay NPC a visit, the cobia to me remains a flawless showcase of the kitchen’s culinary wizardry. —LY

Dining Restaurants Hong Kong Dining best bites
Leslie Yeh
Editor in Chief
Having worked as a lifestyle editor for almost 10 years, Leslie is thrilled to be writing about the topic she loves most: wining and dining. When she's not out pounding the pavement for the latest new restaurant opening or tracking food trends, Leslie can be found at home whipping up a plate of rigatoni vodka and binge-watching Netflix with a glass of Sauvignon Blanc in hand.
Dining Restaurants Food Trends Drinks Travel