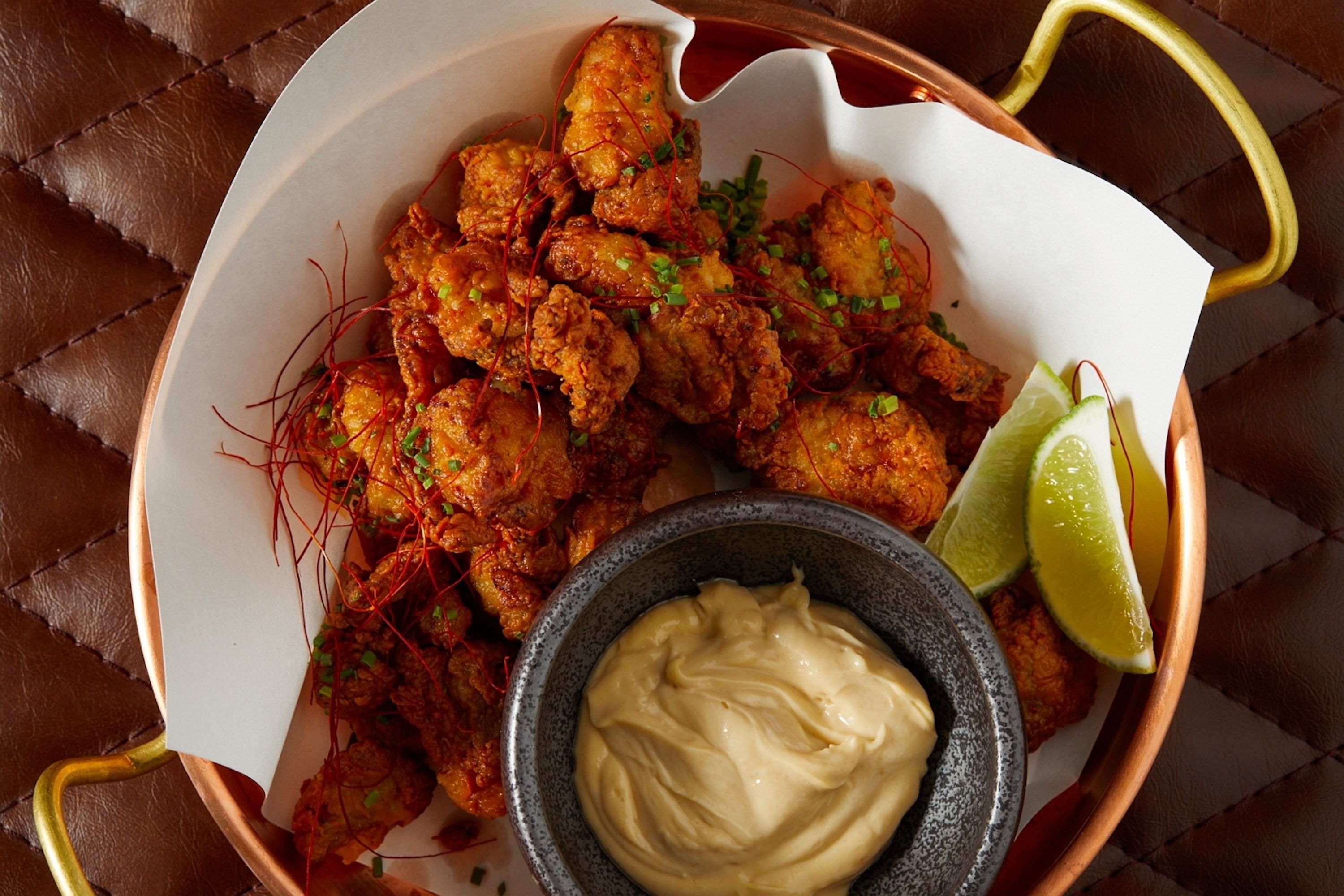 Best Bites: The top 10 dishes we ate in January

Food & Drink
Best Bites: The top 10 dishes we ate in January
Share this article
Next article

Best Bites is a roundup of the outstanding dishes we had within the month which renewed our love for established venues, caught our attention from a new opening, or impressed on us again the creativity and skill of Hong Kong’s talented chefs. From casual street bites to meticulously prepared tasting menu dishes, these are the plates we’d recommend you make a special trip for. There are too many great dishes at new Nikkei restaurant TokyoLima to choose a favourite, but the “Ki-mo-chi” Fried Chicken (HK$110) is definitely a standout. The chef at the now-defunct Chicha has returned to head up the kitchen at this Japanese-Peruvian establishment and he’s hit the nail on the head with a menu that toes the line with unbridled creativity between both cuisines. The chicken karaage (Japanese-style fried chicken) boasts a beautiful golden-brown batter that’s dense with flavour and seasoning, encasing moist and tender thigh meat that’s been marinated in tare for a umami punch. The bowl is also littered with pieces of fried crispy skin, which are absolutely impossible to resist, no matter how hard you’re trying to stick to your new year’s diet. Be warned: this dish could seriously throw you off your goals for the year. —Leslie Yeh, Dining Editor 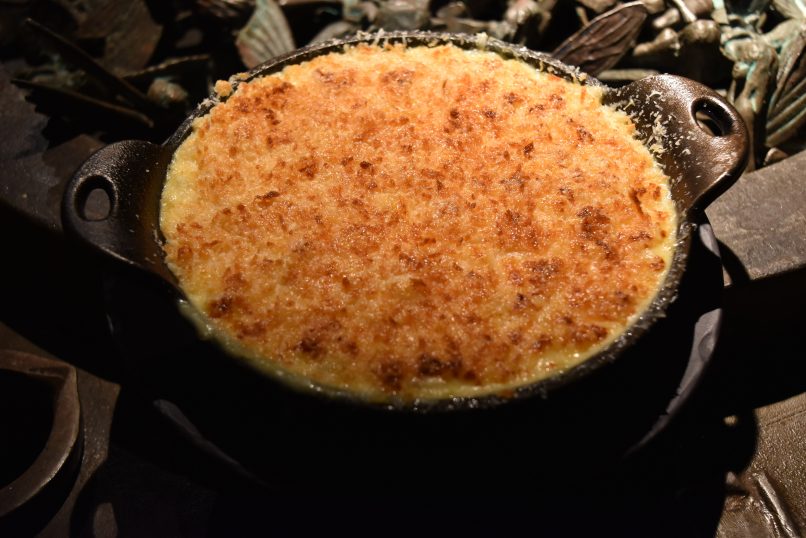 The dish: Macaroni and cheese

I appreciate a bar that puts some thought and effort into its food menu, but rarely do I expect the food to blow me away. And yet, I can’t stop craving the macaroni and cheese (HK$68) served at The Iron Fairies, which has seduced me with its creamy texture, crunchy topping and perfectly cooked pasta — neither soggy nor chewy. Senior sous chef Toby Leung is the creator of this mac and cheese –no joke, one of the best I’ve had in my entire life — and his recipe is the result of an ex-girlfriend challenging him to make something that tastes better that the Kraft stuff that comes in a blue box. Chef Leung’s uses Japanese bread crumbs and Parmesan cheese for the crunchy topping, and a secret blend of three cheeses for the macaroni, including Velveeta. Decadent and rich, this dish is best shared between a few friends, but I wouldn’t blame you if you wanted the whole thing to yourself. —Michael Alan Connelly, Editor in Chief 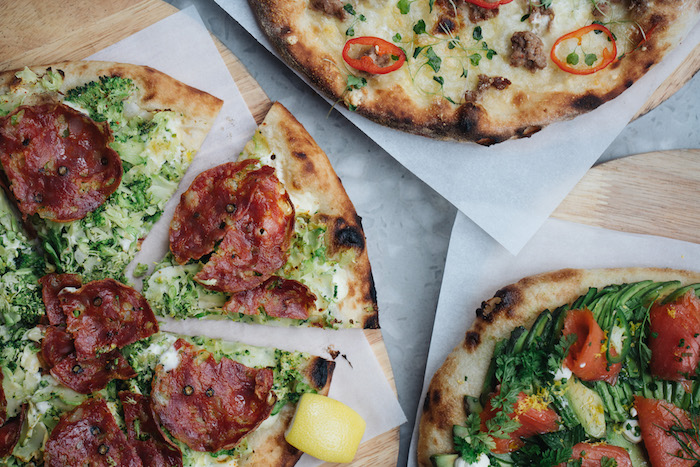 We’ve tasted our fair share of pizzas here at Lifestyle Asia HQ, and can firmly say that Mercato remains one of our top three contenders in town. I popped by to check out the recently launched weekend brunch, and discovered a new favourite pie that plays off the sausage-and-egg breakfast combo — smothered with three cheeses and swimming in a rich, golden egg yolk, the house-made sausage, egg and three-cheese pizza (HK$188) is the perfect brunch-time indulgence. The spicy salami, ricotta with broccoli (HK$188) is a close second that will convert even the most adamant veggie haters, but what really sets Mercato’s pizzas apart is the crust — soft and chewy, blistered in some places and broken up by light and puffy air pockets in others, it’s the perfect rustic base for piling on the fresh Italian ingredients. —LY 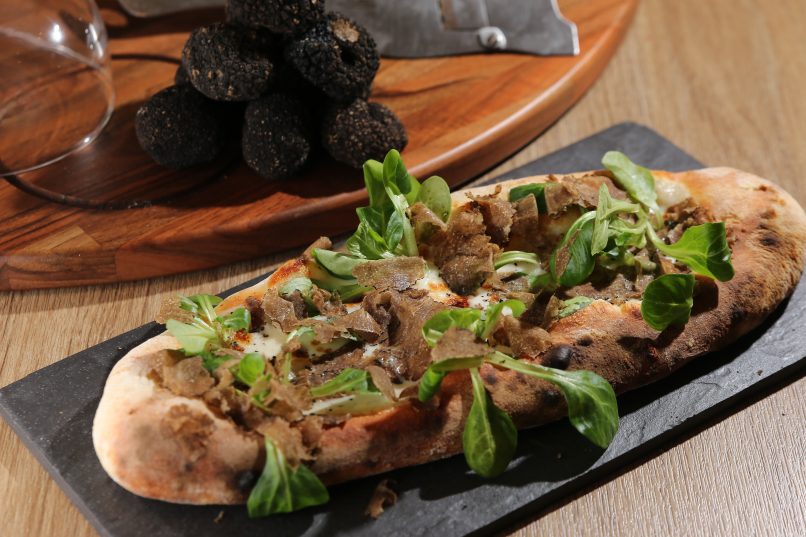 White truffle season may already be a distant memory, but that means it’s time to enjoy black truffle season. Accordingly, The DiVino Group is offering a number of special seasonal dishes, featuring black truffles imported from Norcia, at its restaurants through the end of March. My favourite amongst them is the focaccina (HK$158), more or less a pizza topped with earthy black truffle shavings, creamy Stracchino cheese and, for good measure, some baby mâche to offset all that richness. Get it while it lasts! —MAC

I used to lived in New York, where breakfast sandwiches are so important that they might as well be considered a standalone food group. Fortunately for me, it’s simple enough to find a decent egg sando in any cha chaan teng in Hong Kong, but Lee Lo Mei’s version, named H.K. Breakfast (HK$68), is easily my new favourite. The tramezzini bread is perfectly toasted, surrounding a slice of ham, a thick layer of scrambled Japanese eggs and a decadent application of gooey melted cheese. I’d eat this every morning if I could, but I can’t, which brings me to my only complaint. Paradoxically, Lee Lo Mei’s H.K. Breakfast is only available on the happy hour snack menu from 4pm to 7pm. Still, that doesn’t make it any less delicious. —MAC 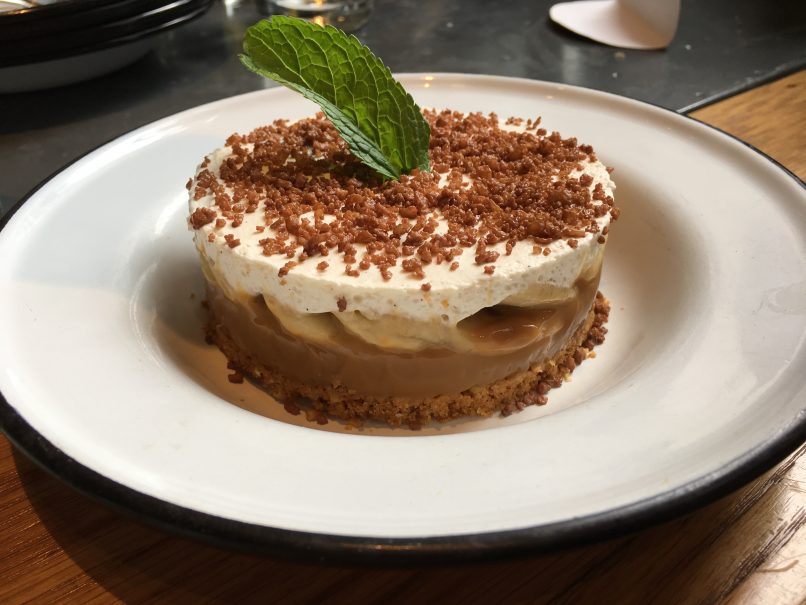 Burgers are king at Beef & Liberty, but I suggest you don’t skip over the desserts. I’d had the oft-Instagrammed warm cookie served in a skillet before, but recently I tried the banoffee pie (HK$68) for the first time, and it’s now one of my favourite sweet treats. This dessert is a marvel of contrasting flavours and textures: a crispy and buttery oat base topped with silky caramel, sliced bananas, whipped cream and chocolate pieces. The crunch of the crust and the chocolate mixes with the smooth caramel and soft bananas, creating an indulgent but harmonious conclusion to any meal. —MAC I’d happily go to 12,000 Francs any time for a taste of chef Conor Beach’s glorious malted sourdough bread, but the current object of my affection is his so-called KA Pastry (HK$80). A pastry freak like me wasn’t fooled by this coy name, which is an abbreviation for kouign amann, a crusty cake from the French region of Brittany made with bread dough, butter and sugar. The best kind of kouign amman tastes like a sweet, caramelised croissant; when I tried this one and closed my eyes, I thought I was in Paris for a moment. Chef Beach adds some maple syrup to the recipe for extra flavour, then plates the finished product with caramelised maple pecans, a pumpkin-and-kumquat purée and the perfect amount of vanilla ice cream. I’ll cry if this dessert ever disappears from the menu. —MAC There’s been a few fried chicken sandwiches popping up over town recently, which is why chef Max Levy of Okra decided to respond with its own version, the ultimate “El Pollo Loco Chicken Samich”. This beauty is the highlight of their newly launched lunch set (HK$138, includes salad and soup) and is a sight to behold — a thick, golden-battered deboned chicken thigh topped with a mayo slaw and sandwiched between two purple sweet potato buns, courtesy of local bakery Po’s Atelier. It’s hard to write about this dish without wanting to go back for seconds, thanks to the combination of a perfect, golden-fried casing with just a touch of Louisiana hot sauce; fresh and tangy slaw; moist meat; and bread that is more soft, lightly sweet and delicious than any (hamburger) buns have a right to be. —LY 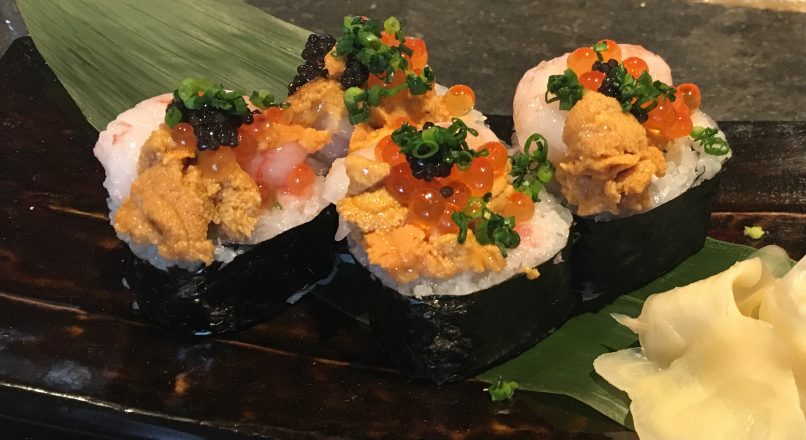 There comes a point where the ubiquitous sea urchin/truffle/fatty beef/toro combinations make it all too easy to get sea urchin ennui, but Momotaro has easily awakened new cravings with its signature Momotaro Roll (HK$398 for four), filled with premium, freshly-flown-from-Japan ingredients that work incredibly well with each other. A plate of fat negi-toro rolls topped with sea urchin, sweet shrimp and ikura, it’s a dish that gives each ingredient time in the spotlight, letting the freshness of each ingredient do the talking. You can taste the rich butteriness of the minced fatty tuna filling, paired nicely with the fabulously fresh Hokkaido bafun uni. This is rounded out with sweet, succulent shrimp, topped with exploding, juicy salmon roe on top. These are hefty, sizeable rolls, with decadence in every bite. —Evelyn Lok, Associate Editor The dish: cheese and jalapeño croissant

Earlier this month, Commissary added a selection of pastries and baked goods to its all-day menu. Created by baking consultant Evelyn Kim, whose experience includes a two-year pastry-making stint at Noma, the new pastries reflect a high level of craftsmanship. A standard croissant and pain au chocolat are amongst the offerings, though my favourite is the cheese and jalapeño croissant (HK$30), which has all the crisp exterior and flaky interior of a normal croissant, only it’s filled with pickled jalapeños and melted Fontina. This would make for a fine breakfast with coffee or even an afternoon snack, and it’s also a nice treat to bring back to the office in a takeaway box. —MAC

Dining Restaurants DiVino Patio Beef & Liberty Best Dishes Okra Hong Kong The Iron Fairies Commissary best bites mercato TokyoLima Lee Lo Mei Momotaro 12000 Francs
Michael Alan Connelly
Head of Digital Content
A Chicagoan by birth and a New Yorker by habit, Michael has more than a decade of experience in digital publishing at leading titles in the U.S. and Asia. When he's not checking out Hong Kong's newest restaurants and bars or jet setting around the globe, you'll find him hanging out with his dog Buster and enjoying an Aperol Spritz.
Travel Hotels Restaurants Cocktails Culture Italy Art Music Cheese
Sign up for our newsletters to have the latest stories delivered straight to your inbox every week.