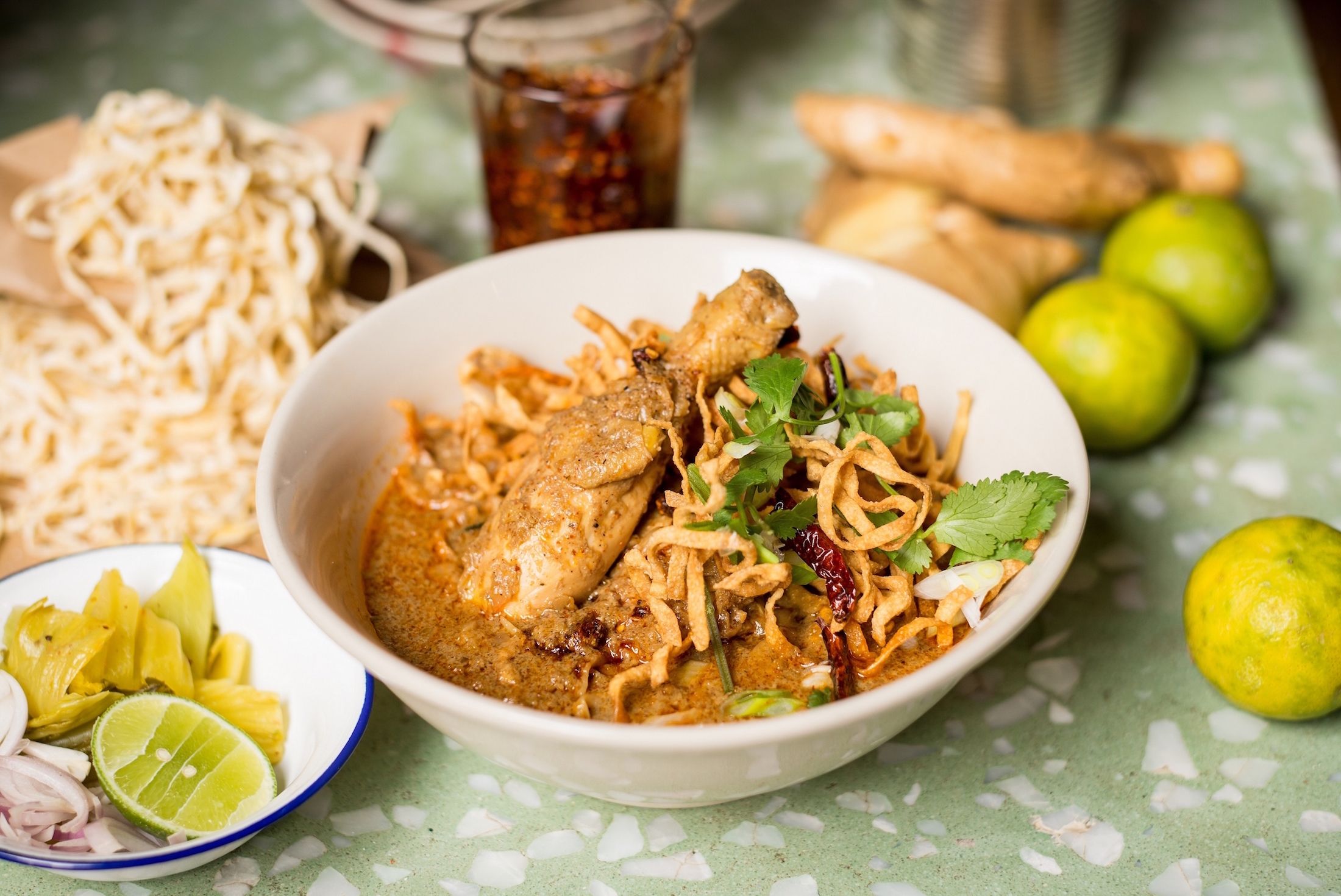 Best Bites: The top 10 dishes we ate in March

Best Bites is a roundup of the outstanding dishes we had within the last month, those which renewed our love for established venues, caught our attention from a new opening, or impressed on us again the creativity and skill of Hong Kong’s talented chefs. From casual street bites to meticulously prepared tasting menu dishes, these are the plates we’d recommend you make a special trip for. The dish: Cookpot of tiny spelt, squid and sesame seeds

As one might expect from a French restaurant opened in prime harbourfront real estate bearing the name of one of the world’s culinary greats, prices at the new Rech by Alain Ducasse are high, and portions small (a fish the size of your palm can cost anywhere from HK$400–$700 as a main). That’s not to say the seafood-focused fare isn’t worth the dent in your paycheck — just make sure you come prepared.

That being said, the exception on the menu is the cookpot, a hearty casserole composed of a layer of creamy, nutty and chewy spelt grains baked in the culinary maestro’s trademark cookpot, priced at HK$180. A combination of squid ringlets, fresh cilantro and lemon peel on top adds a zesty freshness to the earthy, creamy sesame-dressed base below for a comforting, all-in-one pot. It’s supposed to be served as a starter or a side dish on the menu, but we’d happily order this as our main next time, to be enjoyed alongside Rech’s excellent warm bread with kombu butter. —Leslie Yeh, Dining Editor From Shanghainese xiao long bao to Scotch eggs to Jamaican beef patties, I consider myself an expert on a global variety of meats cooked inside of carb-laden exteriors. Thus, it was a pleasant surprise to learn about Pithiviers, a small, round pie that takes its name from the French town where it is believed to have been invented. Pie filled with meat — what’s not to like?

At Upper Modern Bistro, head chef Julian Cadiou is serving a luxurious Pithiviers filled with pigeon and foie gras (HK$388) The buttery, flaky pastry encloses a thick layer of medium-rare pigeon topped with a slice of unctuous foie gras, complemented by a Périgeux sauce made from Madeira wine and back truffles. This is off-the-charts decadence that the small salad served alongside the pie can’t fully counteract, so we suggest that you indulge, but consider sharing with a friend. After all, summer is coming. —Michael Alan Connelly, Editor in Chief Fans of Adam Cliff’s Thai noodle house Samsen will be happy to learn that the kitchen is introducing a special monthly off-menu dish. The catch? It’s available in limited quantities and only on certain days of the week (and no, we don’t know which days). Additionally, the restaurant has been packed to the rafters since its opening so you’ll most likely have to wait for a table. That all sounds like a lot to hunt down a bowl of noodles that may or may not be there, but if you’re lucky, you’ll be one of the few to have a taste of Adam’s ingenious off-the-cuff creations.

I stopped by for a tasting of the first off-menu item (pre-arranged, thankfully) — the khao soi, a Northern-style chicken curry noodle dish. Like the other dishes on Samsen’s menu, including the infamous wagyu boat noodles, chef Adam’s version of the dish is an authentic recreation based on his long tenure spent living in Thailand. The dish draws its aroma from a mix of dry spices, while the rich, smooth sauce is bolstered by coconut cream. The seasoning of palm sugar and fish sauce to find that perfect balance is absolutely spot-on, and the tender chicken has been left to soak in all the flavours from the marinade. Served on fresh Thai egg noodles with a side of pickles and sliced shallots, this dish is giving the wagyu boat noodles a serious run for its money. Safe to say there’s going to be a line out the door for many months to come. —LY The dish: Pancetta, ricotta and spring green pizza with green chilli and herbs

Spring is officially here, and chef Anthony Burd of Mercato has introduced a new menu featuring dishes that incorporate the season’s finest produce. There are many standout items — kale salad with a soft-boiled egg, seared scallops served with artichokes and green olives, ricotta agnolotti in a pistachio pesto — but the one I can’t stop thinking about is this gloriously green pizza (HK$188). Personally, I tend to avoid veg-topped pizzas — they tend to be soggy or wet — but this one works so well that it may have permanently changed my mind.

Cooked in a wood-burning oven, the pizza crust has the perfect amount of crispiness and just a bit of chew to it. The creamy ricotta serves as a base for a liberal application of leafy greens and peas, while slices of green chilli add some heat. The whole thing is made even better by the crisp slices of fatty, salty pancetta in the mix, and yet eating a slice of this manages to feel healthful and virtuous. Regulars at the restaurant already know this but others need to know: Mercato is quietly and consistently serving some of the best pizza in all of Hong Kong. —MAC 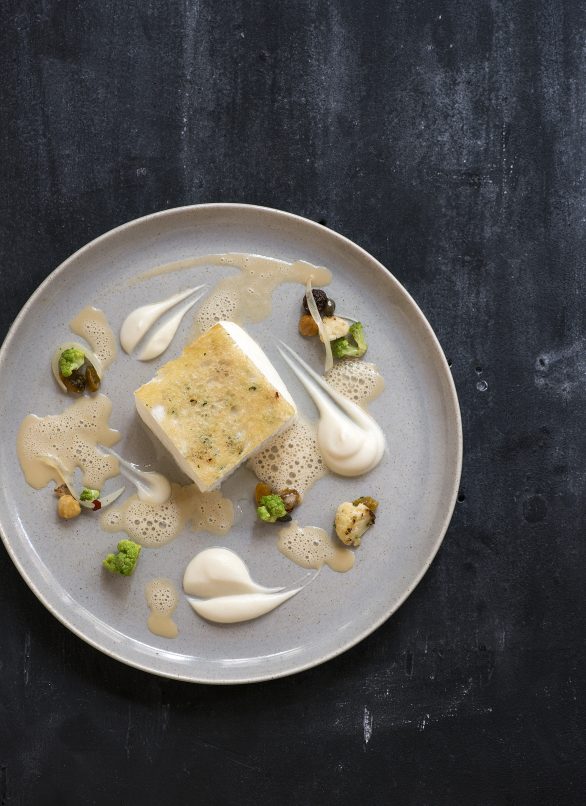 It’s not every time a visiting guest chef is able to quickly acclimate themselves to Hong Kong well enough to present the best version of their food in the tight span of three or four days, but the Marc Forgione pop-up at Lily & Bloom pretty much hit the nail on the head. The flavours were bold, the dishes creative and the flavour combinations not quite like anything you can find anywhere in the SAR. It was, in a nutshell, exactly what chef Forgione is about (anyone who’s seen him in action on Iron Chef will agree).

While several of the dishes could have made this list, I’m going with the halibut en croute, featuring chef’s special “Sauce Proposal”, which I had high expectations for after learning the special reason behind the name. It delivered wholeheartedly — a raisin- and caper-based emulsion that was creamy, tangy, sweet from raisins and nutty from the addition of chopped hazelnuts. The textures were fantastic, especially when mixed with the buttery purée underneath. As for the fish, it was delicate, flaky, and topped with a wafer-thin sheet of toasted bread for a clever crunchy component. Sadly, chef Forgione’s pop-up is now over, but we’ve heard rumours that he’s looking at opening shop here in Hong Kong — hopefully with the halibut en croute on the menu. —LY Anyone who associates Dragon-i with models and bottles will probably laugh at the thought of dining there, but I’m here to tell you that their dinner is quite good. The nightlife spot has launched new Chinese dinner tasting menus designed for groups of 4 (HK$688 total) or 6 ($1,032 total) guests — less than HK$175 per person for a multi-course meal. The dishes are traditional and all well executed, though the chilli pork dumplings were the highlight for me. Perfectly plump and topped with a robust chilli sauce that made my lips tingle without being too fiery, this is the kind of dumpling I’d happily eat every day. —MAC The dish: Brioche with tofu butter

There’s a lot to love about the newly relocated Tate Dining Room & Bar, from the nature-inspired decor to the perfectly constructed, pretty-as-a-picture plates. Chef Vicky Lau’s current “All the Odes” menu is jam-packed with interesting flavours and dishes, including a fantastic Chiu Chow-style foie gras, but as someone who’s obsessed with bread in all its various shapes and forms, I couldn’t help but go weak at the sight of these perfectly formed brioche cubes with even more perfect miniature cubes of tofu butter. It was almost too pretty to eat — although that didn’t stop me from devouring them one by one. Golden-fried on the outside with a soft and fluffy interior and slathered in soft tofu butter, I could snack on these all day long. —LY Songkran, Thailand’s annual New Year’s festival, takes place 13–15 April, and Soul Food is introducing four new dishes to enjoy for the holiday (available through the end of April). I was lucky enough to get an early taste of the dishes, including a spicy green curry with chicken; a ‘clear curry’ with beef and pumpkin; and a Southern-style rice salad with pork, sour mango, herbs and shrimp paste.

My absolute favourite, however, was the larb nua (HK$158), a beef salad of sorts served alongside cucumber slices and herbs. Many Thai restaurants serve versions of larb made with chicken or pork; often, the meat is cooked to the point of being dry and crumbly. Not so here, where the tender, juicy beef is saturated with aromatic spices to create addictive bite after bite. The recipe hails from Northern Thailand, and you can eat the cucumber and herbs with the beef or on their own to refresh your palate. Either way, this larb sets a new bar, and I hope it will live on past April in the form of a daily special or a permanent menu item. —MAC

Amber at Taste of Hong Kong Chef Richard Ekkebus garnered a lot of attention at Taste of Hong Kong for his dish of Miyazaki beef with Kyushu red cabbage, which was named the best dish of the festival, though I preferred this plate of cured Spanish mackerel. For one, the HK$120 price was infinitely more reasonable than the HK$280 guests shelled out for three smallish slices of beef, but beyond that, this dish represented everything I have come to know and love about Amber and its charismatic and extremely talented chef. Look at the artful presentation, the contrast of colours, the interplay of textures. Somehow, it managed to transcend the humble paper plate on which it was served to become one of Taste’s best dishes, in my opinion anyway. —MAC Speaking of Taste of Hong Kong, one of the dishes I enjoyed there and also in its home restaurant this month was chef Max Levy’s crispy Brussels sprouts. The sprouts are fried and then topped with Okra’s house-made XO sauce (HK$58). The veggies are irresistibly crunchy, while some of the individual leaves turn crisp, and the funky sauce provides a nice contrast to the nuttiness of the sprouts. The surprise player in the dish is Xinjiang raisins, which add a bit of lightness and brightness to this brilliant take on what can so often be a throwaway side dish. —MAC 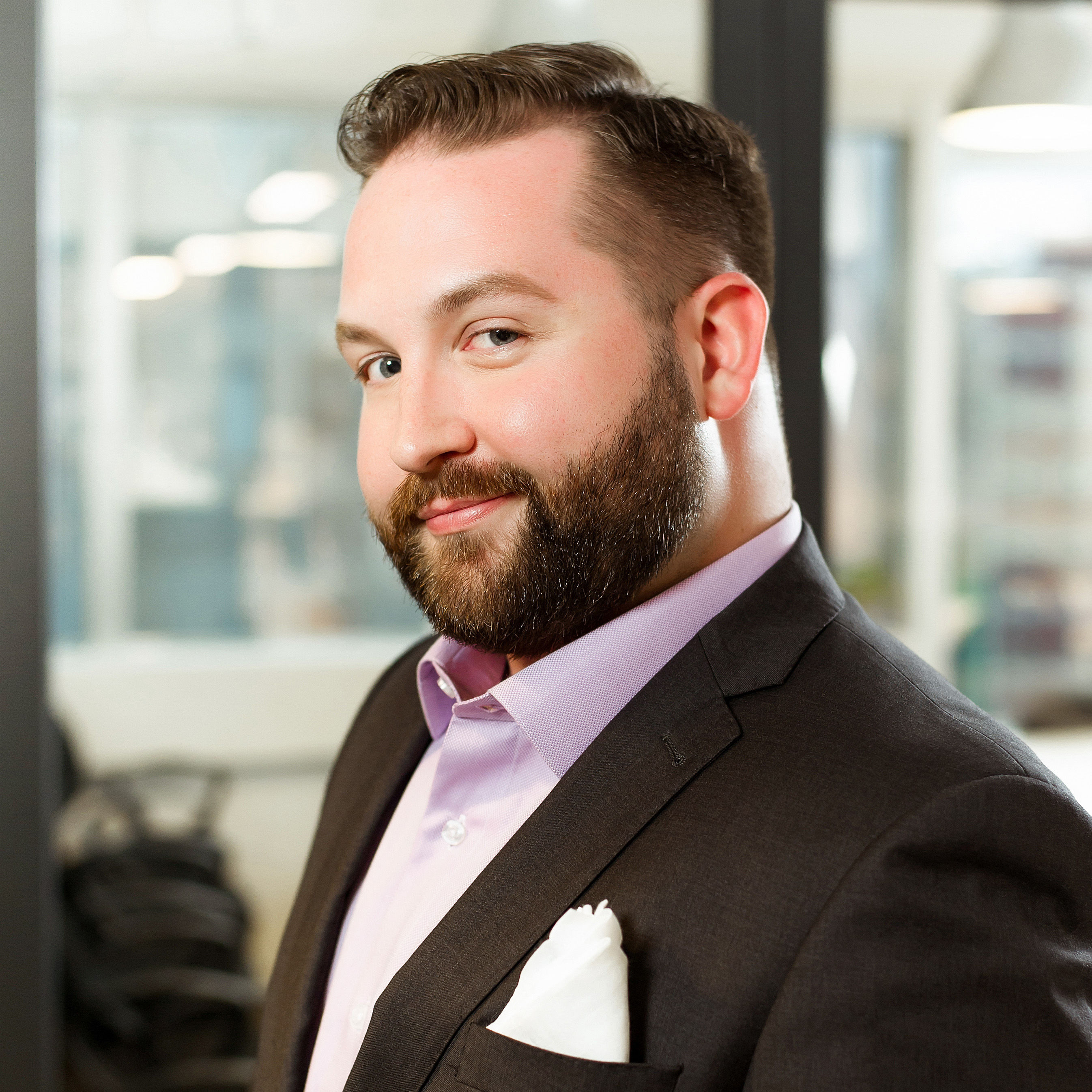 A Chicagoan by birth and a New Yorker by habit, Michael has more than a decade of experience in digital publishing at leading titles in the U.S. and Asia. When he's not checking out Hong Kong's newest restaurants and bars or jet setting around the globe, you'll find him hanging out with his dog Buster and enjoying an Aperol Spritz.