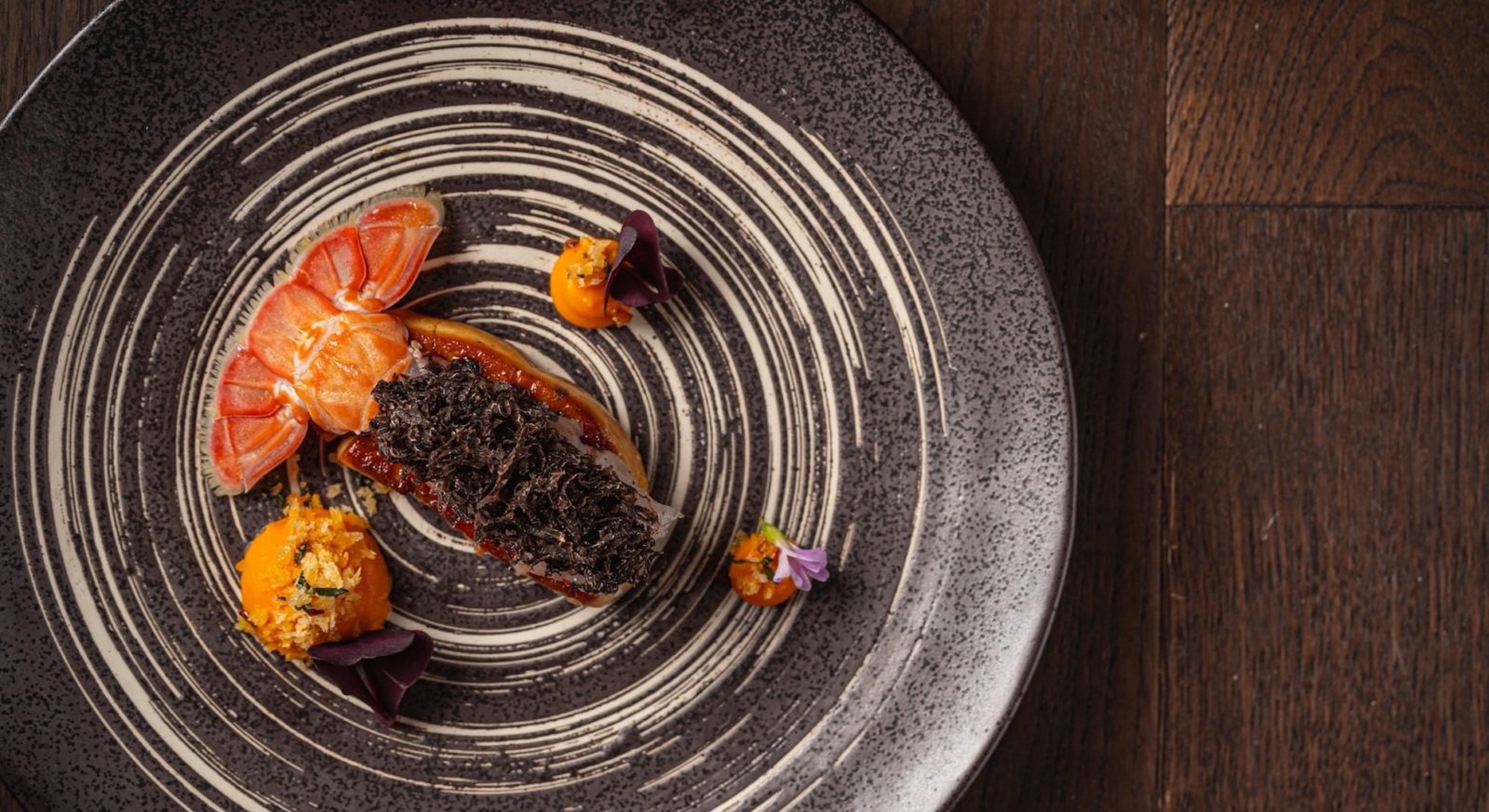 Food & Drink
Best Bites: The top 5 dishes we ate in August 2020
Share this article
Next article

Come to think of it, the very conceit of the steak tartare is rife with the potential for misfire. Between the starring role played by raw bovine flesh or the mandatory inclusion of uncooked yolks, there’s quite a lot which can go wrong if your mise en place isn’t up to snuff. Blessedly, the situation was quite the opposite when I visited Hansikgoo a few weeks ago: Award-winning chef Mingoo Kang’s boisterous new ‘modern Korean’ concept in Central.

In my mind, Hansikgoo’s tartare (part of the HK$780 tasting menu) is a distant cousin of what you’ll find Mario Paecke assembling at Somm. Of course, the backbone of the dish is an extremely satisfying heaping of raw steak — in this case, grass-fed Aussie chuck. It’s definitely on the leaner side, but has been chopped and seasoned with such efficacy as to become just toothsome enough: a cascade of beefy ribbons, holding onto all of the boldness of the homemade jang, sesame and egg yolk seasoning.

To this, chef Mingoo has added two supporting elements: fried artichoke ‘crisps’ and finely chopped batons of Korean pear. As you flit between mouthfuls of steak accented by crunchy artichoke, then the almost floral sweetness of the pears, you’ll begin to discern just how much of chef Mingoo’s cooking is clever contemplation, masquerading as something universally approachable. You know, like the humble combination of steak and egg. —Randy Lai, Editor

With a number of hallowed kitchens tucked in their CVs (Tate Dining Room, L’Atelier de Joël Robuchon, Arbor — where Ray Choi was most recently sous chef to Eric Räty — to name a few) Chefs Devon Hou and Ray Choi are no stranger to sharing the kitchen bench. Their collaboration at Test Kitchen earlier in February further solidified each chef’s well-deserved cult following with their ‘If We Were in Charge’ menu, which spotlighted delicacies inspired by their experience cooking at an array of Michelin-rated venues across the city.

Fans eager for another taste of their creations will want to head to COBO House at K11 Musea, where the chefs have taken up the mantle for what is essentially a permanent four-hands fine-dining affair, starting with their ‘Chapter Zero’ menu, available in six- and eight-course tasting menus and a four-course business lunch.

Too often these days you’ll find such tasting menus at this level and price tag riddled with caviar just seemingly for the sake of expensive taste, so much that it’s practically a rarity when a chef demonstrates the restraint to create a balanced bite with the ingredient.

This ‘warm’ Japanese oyster nailed that Goldilocks level of ‘just right’ for me. The sweet, just-cooked flesh was a single slurp of rich, silky goodness, complemented by a delicious Champagne beurre blanc sauce — the pearls of salmon roe and caviar bursting on the tongue for a satisfying, savoury pop of flavour. Served as a prelude to a sweet seafood raviolo course and eaten while admiring the incredible harbour front vista at K11 Musea, it’s a whole experience on a multi-sensory level. —Evelyn Lok, Managing Editor

You might also like…
Living
How to Succeed: Maxence Dulou, Estate Director & Winemaker of Ao Yun
Style
The best new sneaker drops to know about in September 2020

Because foodie culture is so often about reducing topics of great scope and nuance down to easily digestible sound bytes, it’s little wonder that Bâtard (a new wine-focused bistrot, located inside the cavernous confines of Fine Wine Experience) is already being compared to Michelin venues such as Louise. (Ask the quintessential everyman “why?” and you’ll probably be greeted with some throwaway answer about the former also doing “angel hair pasta and a roasted chicken.”)

Arbitrary comparisons aside, Bâtard’s aspirations aren’t so lofty as the places it’s being held up against, but we’d have to concede that this independent venue’s raison d’être (“comfort food elevated to pair with the world’s finest wines”) is equally worthy of celebration.

Few dishes exemplify that point better than the Squid à la Plancha (HK$160): a seemingly humble hodgepodge of fingerling-sized baby cephalopods, fished out of the South China sea and sourced in local wet markets. Chef Peter Teo par-cooks and then quickly finishes the seafood on a ripping hot grill (the eponymous plancha): each piece dressed in an unfussy mixture of salt, pepper, lemon, olive oil and then — for some heat and colour — ground espelette.

On paper, it’s the sort of dish that a fairly humourless person might dismiss as “grilled squid”, but here, it makes a meaningful contribution to the restaurant’s MO — by enhancing the pleasure of whatever’s in your glass. In my opinion, this dish is at its best with a bottle of something racy, delicate and subtly mineral — the Rieslings of the Mosel-Saar-Ruwer are a great starting point. — RL

Try as I might, the nighttime dine-in ban (only very recently relaxed mind you) is less of a half-forgotten memory, and more of an unshakable demonic presence. Point in fact: the ban’s effect was so demoralising that, for much of last month, one of the best dinners I’d had was a takeaway. Granted, said ‘takeaway’ was HK$518 excluding delivery, and prepared in the gilded kitchens of Four Seasons Hong Kong; and whenever assailed by the evils of an international pandemic, a la minute hotel food is a guaranteed safe haven. But I’m getting sidetracked.

In addition to a range of roast centrepieces (that you can easily procure via same-day order), Four Seasons has steadily been whipping up batches of ‘meals to share’ over the last few months, the likes of which you’d usually order at some godforsaken hour — with a side of fries tacked on for good measure. Usually, the format consists of a starter, main and dessert: prepared in romantically inclined portions, big enough to feed two people.

The combo I chose (a prawn Caesar; Hainanese chicken rice; and baked chocolate tart) was a pretty neat time capsule of all-day dining staples which have been popular in the hotel for over a decade — and not without reason. Despite the flotilla of takeaway containers — probably the only area where drastic improvement is needed — all three courses were satisfying renditions of their in-room dine-in counterparts.

The Caesar was prepared with baby romaine leaves of a consistently manageable size, tossed to coat in a suitably creamy dressing. All of the constituent elements in the Hainanese chicken arrived at a very acceptable temperature (even the broth, nourished with a hint of winter melon); and the caramel chocolate tart made for a solid finish, offering the semi-savoury richness that I favour whenever I order dessert. As with all hotel deliveries, these ‘meals to share’ err on the pricier side but if you’re looking for something short of a HK$880 gourmet bento, this is a safe bet. — RL

The dish: Scampi with foie gras

In a word, this dish was pure decadence. It helps that it has some of the very best things in life: A silken, fat piece of poached Italian scampi, duck foie gras, seared crisp and medium rare inside, a light-handed drizzle of buttery pumpkin purée, and a mountain of freshly shaved Tasmanian winter truffle piled so high, I had to do a double take to make sure it wasn’t nori.

At a restaurant named after an opera piece, theatrics are perhaps to be expected. But in his modern approach for familial Italian fare, chef Andrea Zamboni’s consideration for fresh ingredients (most, if not all, are flown in weekly from Italy) gave way to an eye-opening performance.

During his previous tenure at The Ritz-Carlton, Guangzhou, chef Zamboni first got noticed by the Michelin guide in 2018 for his earlier rendition of this Scampi dish.

Where you’ll often see unctuous, fatty ingredients like foie gras and buttery shellfish cut back with the tart, bracing flavours of fruit jams or vinegars, the dish was different. The two stars of the show are showcased on a bed of celeriac puree to ground the whole lofty affair. Yet, instead of muting or cancelling out the flavours, here it’s a case of more is more: with the light sweetness of pumpkin and celeriac playing duet to the fresh flavour of Scampi; the blanket of truffle adding a savoury perfume to every bite; and the velvety, bouncy textures of all the components rolling together for an intensely wow-worthy dish. It’s no wonder the dish is considered ‘off-menu’ and depends on market availability — they say you can’t put a price on happiness after all. — EL

Q&A: Buzz Tang of The Anthology on Chinese craftsmanship and the importance of originality