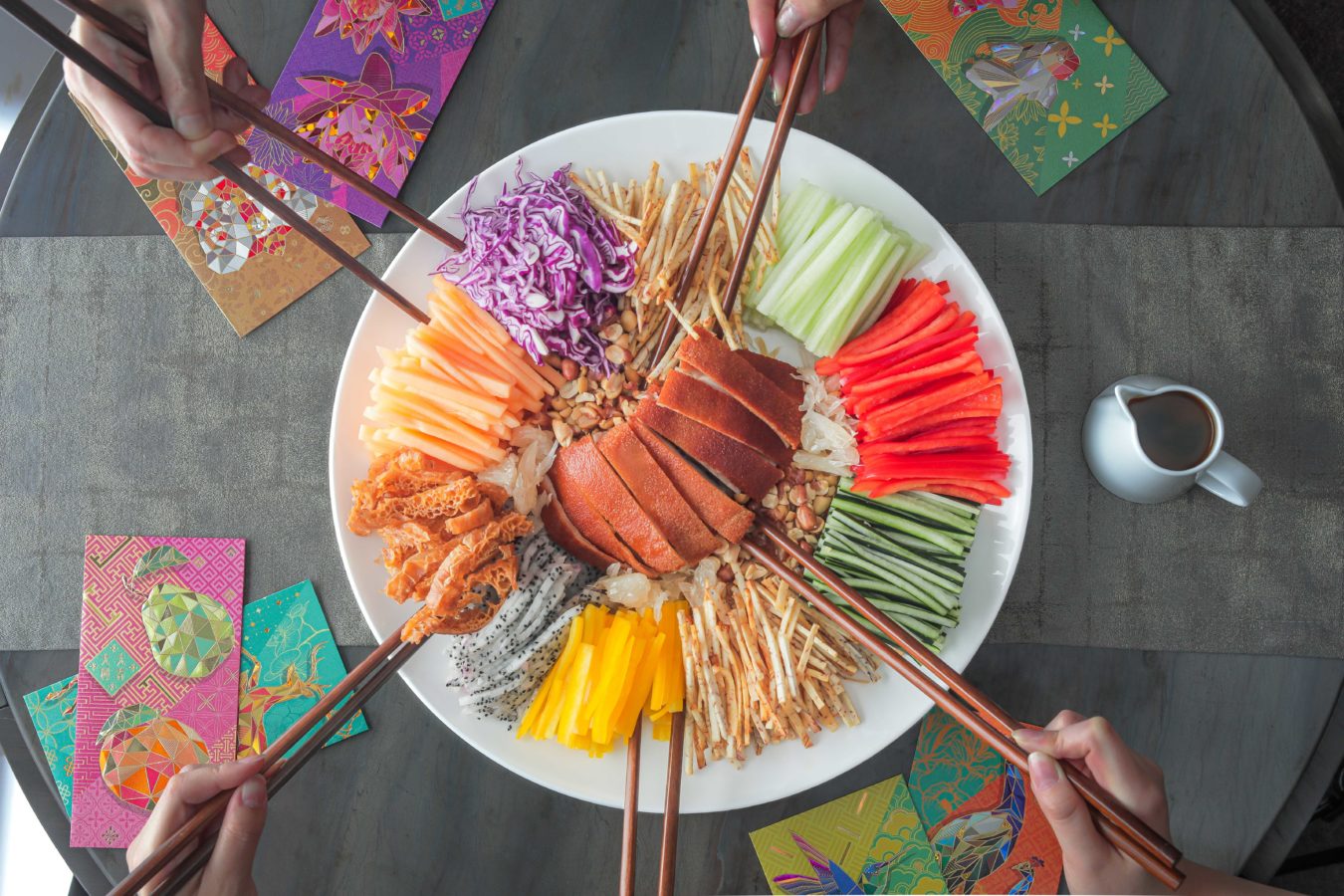 Food & Drink
Best Bites: The top 6 dishes we ate in January 2020
Share this article
Next article The dish: Chocolate with rosemary and Sicilian olive oil

Once a die-hard sweets fiend, I’ve definitely found my tastes changing as I get older, with dessert these days more of an afterthought if I’m craving just a bit of sugar after a good meal. Not so at Mono however, the recently opened restaurant from Petrus-alum, Ricardo Chaneton. The veteran chef is serving a truly transformative tasting menu inspired by his South American heritage, and while you’ll have to stay tuned for the full review, I’ll just give one quick tip: save room for dessert. Showcasing South America as one of the world’s leading cacao producers, the final bite of the evening (part of the HK$1,280 tasting menu) is a beautifully constructed dessert featuring prized chocolate from Venezuela, with Sicilian olive oil and rosemary ice cream adding a touch of grassiness to cut through the dense, decadent chocolate. I could eat this by the spoonful for breakfast, lunch and dinner. –Leslie Yeh, Dining Editor

Newly minted one Michelin star, I finally had the chance to scoot over to Rùn at the St. Regis and see what all the fuss is about at one of the city’s newest fine dining Cantonese restaurants. Chef Hung Chi-Kwong certainly impressed us with one well-conceived and thoughtfully executed dish after another, including a golden Wagyu beef puff chock-full of a savoury meat filling, and a spring-looking version of fried rice studded with sakura shrimp and roe. Of course, we had to have lo hei for the new year: the colourful platter symbolising prosperity was meticulous cut and presented in a gorgeous arrangement with dragonfruit, colourful peppers, starchy batons of taro, and crispy-skinned suckling pig as the centrepiece. The dish may not be available all year round, but there was certainly no better way to kick off the new year. –LY Led by French industry heavies Romain Loriot and JB Issele, ThinkWine (see our full review here) doesn’t immediately strike one as a contender for ‘best brunch of January’. And yet, despite the absence of anything resembling a kitchen, the ‘Chateau to Table’ wine bar’s new brunch menu (HK$290 plus 10% surcharge) reveals itself to be a masterclass in rustic, delicious grape-friendly morsels. Oh, shall wonders never cease?

The all-day Sunday menu smartly compliments any course of felicitous daytime drinking, commencing, as these sorts of affairs are wont to, with a veritable smorgasbord of charcuterie (in this case, cow and sheep’s milk cheeses paired alongside premium Iberico from Pata Negra House). Take care to pace yourself however, as it pays to be rapacious when the main course of Dragon Dog arrives. Here, fist-sized morsels of mouthwatering Atlantic lobster are heaped atop a toasted roll, intercut with lashings of black truffle, tangy red wine mustard, and a suitably springy baseline of boiled pork sausage. Where the average hot dog is a case study in restraint, think of this as a gleeful rejection of that and other ridiculous notions. Moderation? Healthy cholesterol? Such concerns are immaterial in the delicious realm of the Dragon Dog. –Randy Lai, Watches Editor Pirata Group is well-known for offering value-for-money brunch deals across its portfolio of casual eateries. The latest to launch is Honjo, where HK$468 gets you the semi-buffet at the sushi and sashimi counter with freshly shucked Scottish oysters, plus a variety of starters for the table — think Wagyu tataki, Okinawan-style fried chicken, and chilled spinach in sesame sauce — and your choice of main course per person. After eyeing the flank steak with shisho chimichurri and salmon teriyaki with charred lime, we decided to go with the honey-baked miso chicken. The crispy, caramelised skin was fantastic, while functioning as a protective sheath for the juicy, tender meat — all paired with a bright herb sauce and gorgeously seared shiitakes. Chicken may have bad rep as a boring choice of main when dining out, but I have to say, Honjo’s is one exception to the norm. –LY I’m a firm believer in the age-old wisdom that ‘too much is just enough’. In practice, this boils down to me ordering one too many Gimlets, leaning in to the fattiest cut of every red-meated animal, and hurling torrential obscenities at those who don’t partake in the glorious ritual of after-dinner smoking (evolution gave you a pair of lungs for a reason Chad, and it certainly isn’t healthy respiration). So when I stopped in for my regular session at Grand Hyatt Steakhouse — usually just a light repast of ribeye and 1.5 litres of Cabernet — my attention was piqued by the restaurant’s new coupling of seasonal burgers (available until the end of February).

The best of these is undoubtedly the ‘Pompous’ burger (HK$580), a decadent assemblage of ingredients that appears designed to induce an immediate stroke in the diner. Far from being a cash cow — pardon the expression — intended to capitalise on the appetites of casual diners, the Pompous is an expertly constructed ode to the great monster burgers of yore, depressed under a mountain of foie gras, Comté and creamed truffles. Chef de Cuisine Fernando Gojan also knows a thing or two about the subtleties of animal protein: despite wave after wave of pungent flavours, the burger patty (a combination of wagyu chuck, short rib and brisket) remains at the centre of every mouthful. –RL Recently appointed executive chef Uwe Opocensky and chef de cuisine Bjoern Alexander have created a show stopping dinner menu at Petrus, with inventive highlights that had us swooning at each course ranging from the cured beetroot ‘bresaola’ neatly presented in a rose; to the moreish spin on a Hong Kong curry fishball using lobster and scallop puree; and a home smoked salmon so soft and delicate it melted on our tongues.

But as they say, a fantastic meal needs to end on an equally fantastic note, and for that, chef Panek’s ‘Banana’ dish (HK$288) dutifully hits the spot. A plate of homemade peanut puree is whipped into a luscious cloud-like meringue, then lightly torched before being topped with a ripe, flame-grilled banana and spoonfuls of chopped bourbon jelly all assembled table-side. The warm nuttiness of the peanut and ripe banana is already a flavour match made in heaven — transforming the simple, approachable childhood joy of the peanut butter and banana sandwiches that one might have had as an after school snack with an alcoholic jab of whisky. This helps to dial back the sweetness with a grown-up astringency. It’s not the most photogenic thing on the tasting menu — needing two wafers of chocolate to conceal the glob of banana, but it’s the perfect ‘ugly delicious‘ dish to round out a dinner that will have you daydreaming about it long after the meal. — Evelyn Lok, Associate Editor

Dining Restaurants Hong Kong Dining best bites mono
Leslie Yeh
Editor in Chief
Having worked as a lifestyle editor for almost 10 years, Leslie is thrilled to be writing about the topic she loves most: wining and dining. When she's not out pounding the pavement for the latest new restaurant opening or tracking food trends, Leslie can be found at home whipping up a plate of rigatoni vodka and binge-watching Netflix with a glass of Sauvignon Blanc in hand.
Dining Restaurants Food Trends Drinks Travel

The best vegetarian and vegan-friendly restaurants in Hong Kong