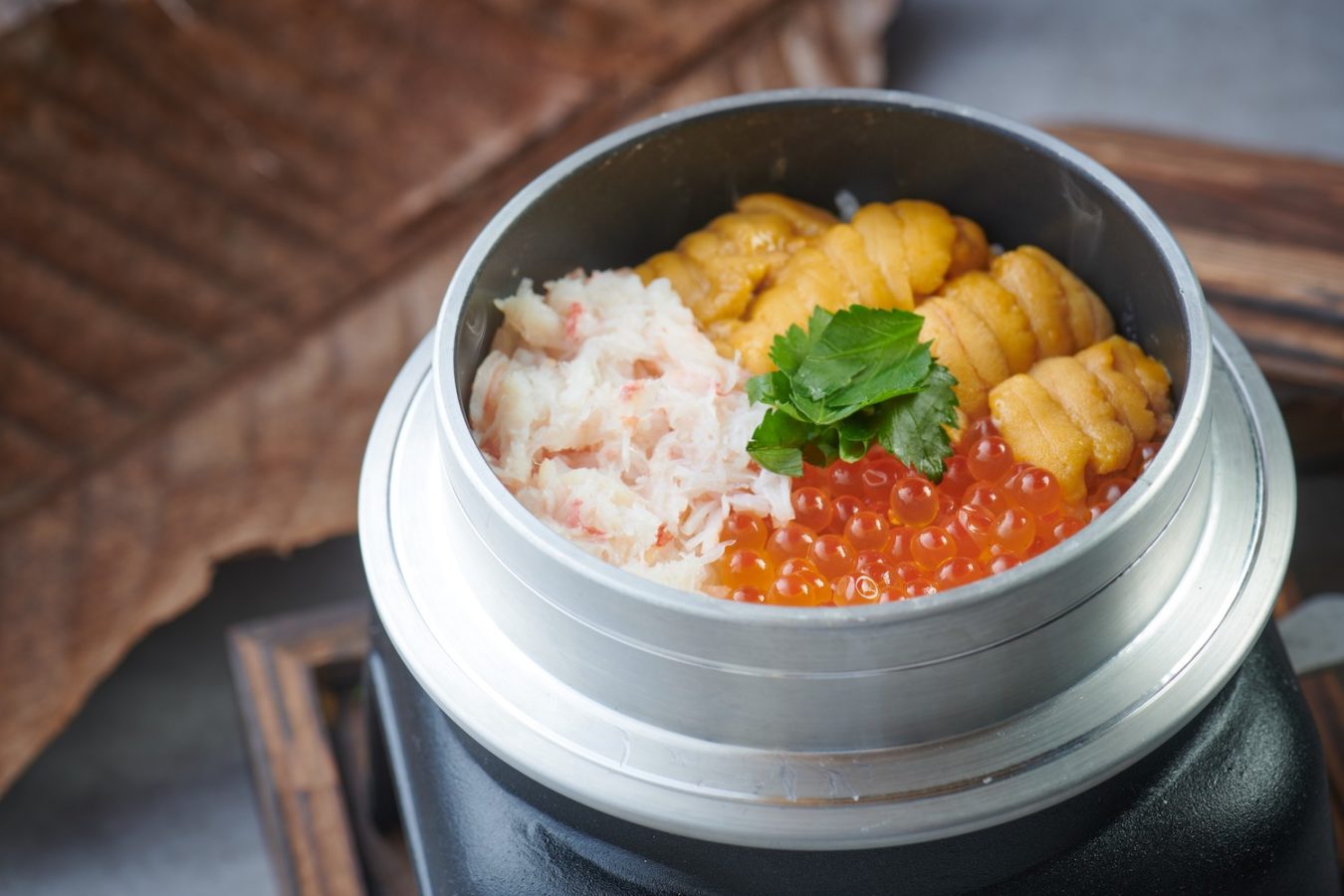 Food & Drink
Best Bites: The top 6 dishes we ate in March 2020
Share this article
Next article The dish: Soba Noodles with Sea Urchin and Black Caviar

Hong Kong may be inundated with fine dining Japanese restaurants, but Kappo Rin’s elevated cuisine certainly stands a cut above the rest, showcasing the high craftsmanship of Master Chef Yoshitake. It’s no wonder, given the chef also oversees the renowned Sushi Shikon — both housed within the Landmark Mandarin Oriental.

In the multi-course tasting, every dish serves as an eye-opening example of the highest form of Japanese culinary arts, but I couldn’t help but crave seconds of the soba noodles with sea urchin. Served in a delicate glass bowl and gone in just a few bites, the dish inevitably leaves you wanting more: from the slightly cool, toothsome buckwheat noodles to the creamy lobes of sea urchin bringing a tidal wave of oceanic flavour, and the pop of caviar lending a briny bite. It’s a classic combination for sure, but executed here to utter perfection. –Leslie Yeh, Dining Editor 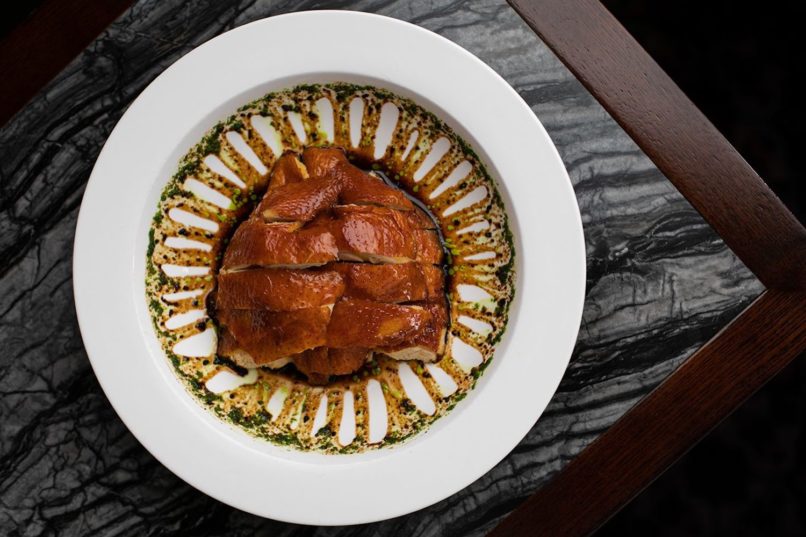 The dish: Chicken with Black Truffle and Chive Sauce

The hype surrounding Madame Fù’s opening has not gone unnoticed — daily crowds fill the aesthetically pleasing, colonial-inspired eatery which specialises in contemporary Chinese food (with Western influences). The lunchtime set is a delight in itself (and very reasonably priced at HK$268), however, it was one of the main courses which outshined the experience for me, and I was lucky enough to try it before they sold out.

Every day, customers who have done their research, know to order this special dish: the Chicken with Black Truffle and Chive Sauce. Our waiter told us to “guess” the ingredients upon first taste. Expect a complex rush of flavours — the black truffle being the most dominant, of course, but not overpowering the medley of spices. Take another piece and dip it in the sauces which surround the bowl — the chive sauce bearing a pesto-like consistency and brightness. The secret ingredient which gives the real kick? Sichuan pepper, offering a tongue-tingling sensation to complement the juicy, succulent chicken. –Faye Bradley, Contributor 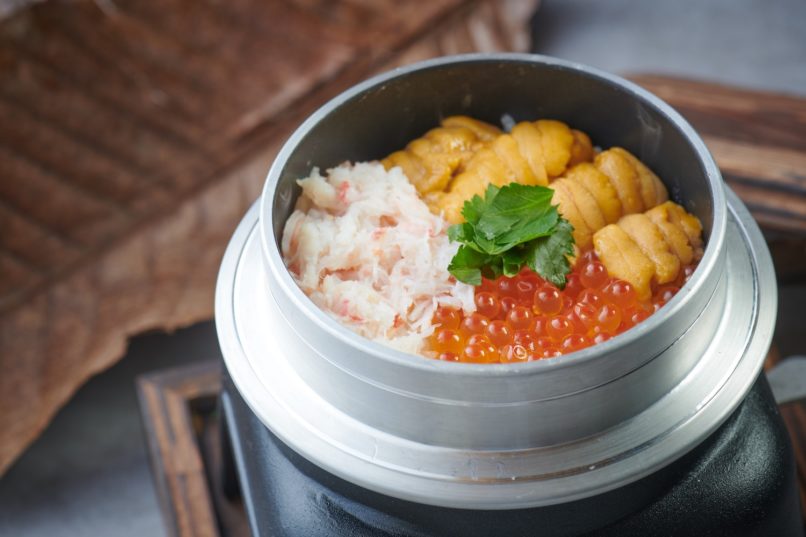 Nestled amongst the thin skyscrapers lining Stanley Street in the Central business district is Gyotaku, a cozy Japanese restaurant with relatively informal seating. Although busiest during lunch hour and catering to the bankers and lawyers in the vicinity, its revamped core menu is most definitely worth considering. With new Head Chef Yam Wai Lok being added to the fold at the start of the new year, the eatery looks to place an emphasis on utilising the highest quality seasonal ingredients available.

Much of the new offerings involve a medley of fresh sea urchin (uni), crab meat from Hokkaido and salmon roe (ikura) — all universally loved ingredients. The standout, however, comes in the form of the aforementioned seafood trifecta being served atop a pillowy bed of dashi-simmered rice over a low burning flame. The dish is housed in a stone pot which allows for the edges of the rice to develop a crust, adding texture and bite. The generous smattering of sea urchin and salmon roe is finely balanced by the inclusion of mushrooms which provides an earthy undertone to prevent the dish from being overpowering. A truly luxurious take on comfort food if there ever was one. –Alexander Esmail, Contributor 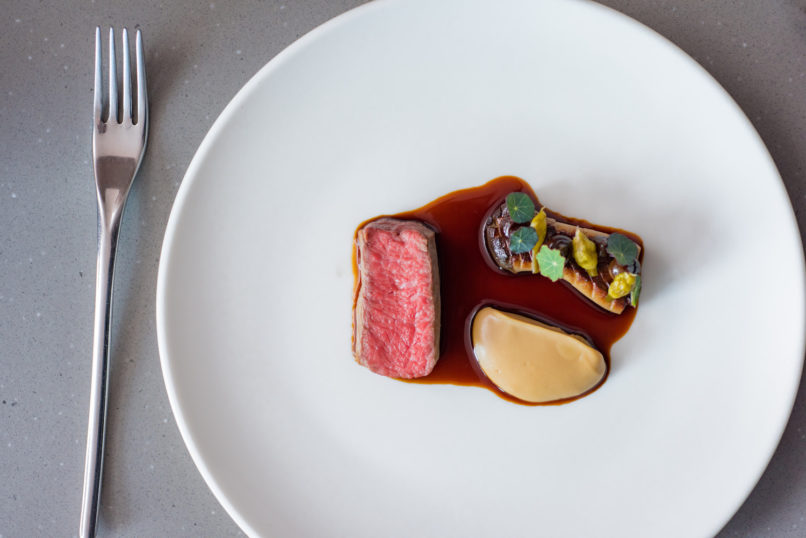 We recently visited Aulis Hong Kong, Simon Rogan’s experimental kitchen, to try their new spring menu: an enchanting 15-course extravaganza led by sous chef Karl Steele (HK$1,280 per person). From flowery fields of vibrant amuse bouche to the signature ‘Aulis’ dessert featuring miso cream and nashi pear, the predominant theme of the evening was all about playing up the brightness found in specialty local and British produce.

I personally always see the meat dish as the anchor to the meal, and it was fascinating to see chef Karl’s treatment for the Spring season. Dry-aged for 42 days, the sirloin was sliced to reveal a uniform pale pink throughout, while nailing a melt-in-your-mouth quality thanks to the ageing process. Without being too funky, there was a luscious, blue-cheese fruitiness on the tail end of each bite. The accoutrements were a torched king oyster mushroom topped with a tangy black garlic emulsion and garlic flowers, and a quenelle of jerusalem artichoke puree. What seemed like a simple triptych of ingredients became a complex flavour bomb in every bite — especially when we mopped up the silky beef jus, all of which paired perfectly with a jammy Rioja. Honestly, we would have been happy to end the meal there. 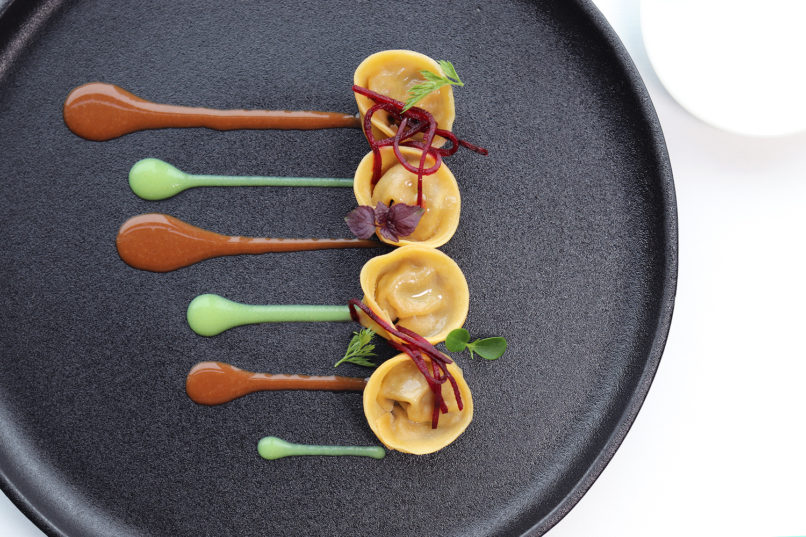 The dish: Tortellini with porcini and Iberico ham

Although not the most theatrical dish of the night (this honour probably goes to the smoked salmon appetiser with Instagrammable dry ice), the handmade tortellini stuffed with porcini mushroom and Iberico ham was the undisputed crowd pleaser of Cucina’s special 4-course menu (available until the end of April).

Four glossy, golden parcels, as if they’ve just parachuted onto the plate through an olive oil drizzle, arrive as your main course. Like little members of a Cuisine Sans Frontieres, they earnestly off-load their delectable cargo onto your tongue: the earthiness of the porcini and nutty salt notes of 48-month-aged Iberico ham inject your taste buds for satisfyingly savoury relief. A dab of the pear and madeira sauce adds tartness, while the bright, fruity glass of La Spinetta Vermentino Bianco (if you opt for the wine pairing) draws out the salty notes of the Iberico ham. –Irene Pyne, Contributor 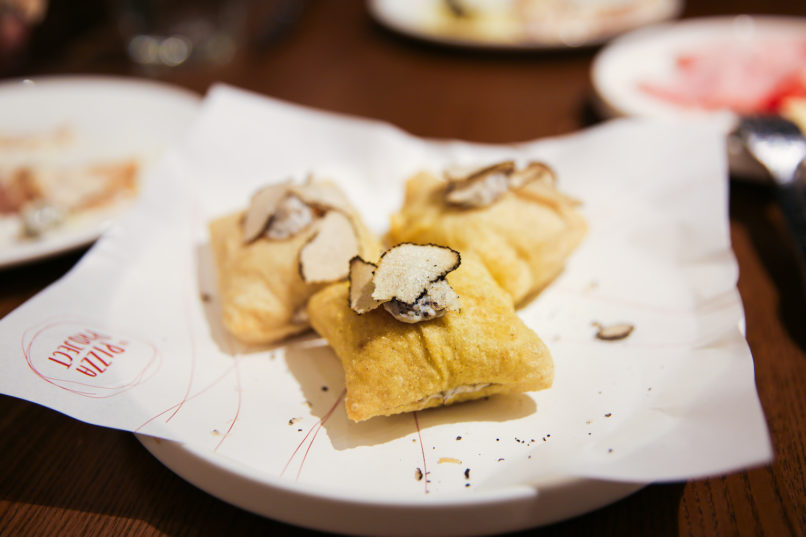 The dish: Gnocco Fritto from The Pizza Project

Have you ever sunk your teeth into something and let out an involuntary moan after the first bite? I’m not even the slightest bit ashamed to admit that it happened to me a few weeks back when I tried The Pizza Project for the first time. Admittedly the latest Pirata Group venture is a pizzeria first, but although the pies were good, I definitely enjoyed the gnocco fritto appetiser the most. I opted for the truffle version, and the first explosion of ricotta and truffle filling encased within a crisp bread puff was enough to fire up my taste buds. Though the dish is fried and creamy, the mini bites are lighter than you’d expect, and I barely stopped myself from ordering more. –Aydee Tie, Head of Marketing
The Pizza Project, G/F, 26 Peel Street, Central, Hong Kong, +852 2311 1815
Dining Restaurants Hong Kong Dining best bites madame fu gyotaku
Leslie Yeh
Editor in Chief
Having worked as a lifestyle editor for almost 10 years, Leslie is thrilled to be writing about the topic she loves most: wining and dining. When she's not out pounding the pavement for the latest new restaurant opening or tracking food trends, Leslie can be found at home whipping up a plate of rigatoni vodka and binge-watching Netflix with a glass of Sauvignon Blanc in hand.
Dining Restaurants Food Trends Drinks Travel