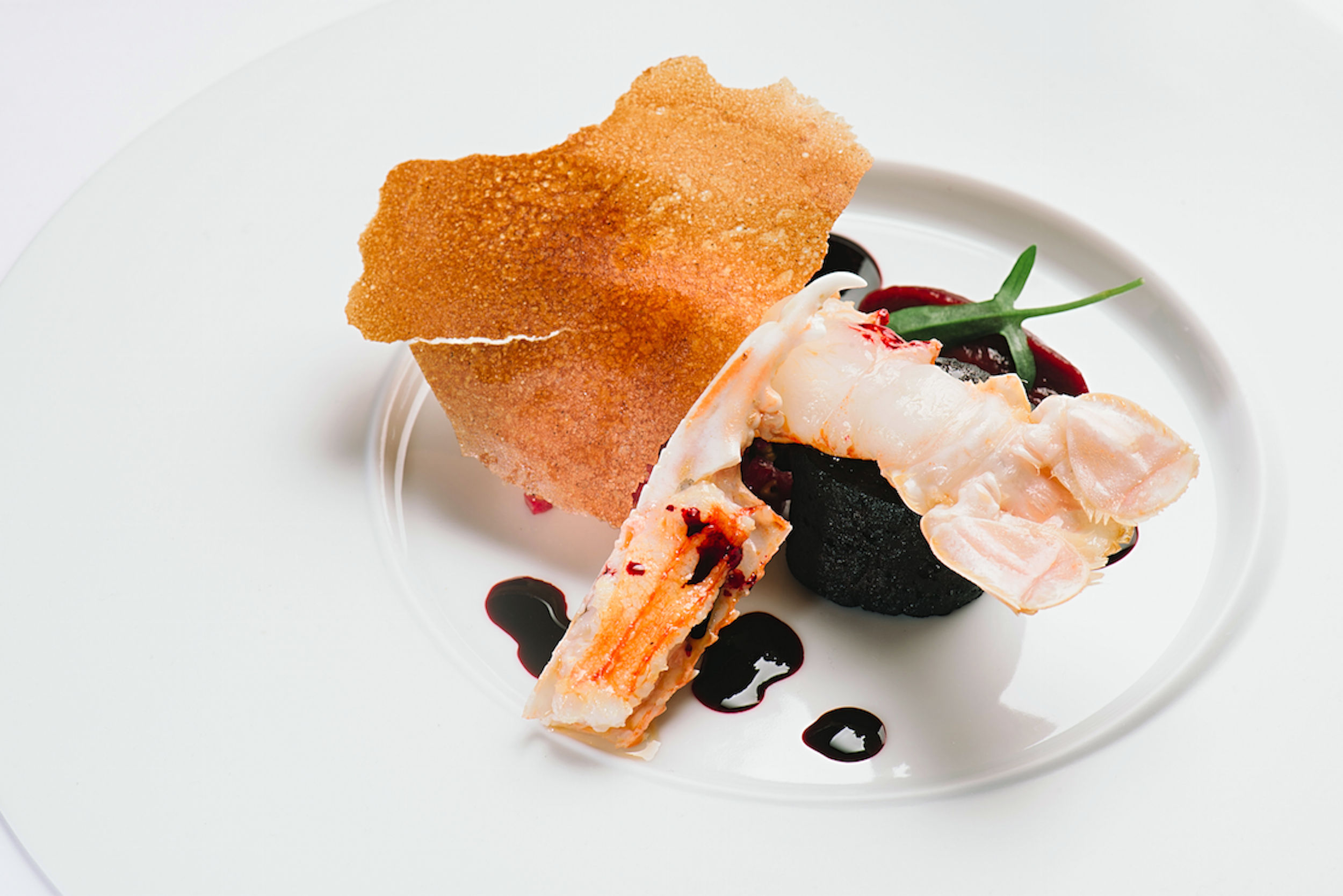 Best Bites: The top 7 dishes we ate in May

Food & Drink
Best Bites: The top 7 dishes we ate in May
Share this article
Next article 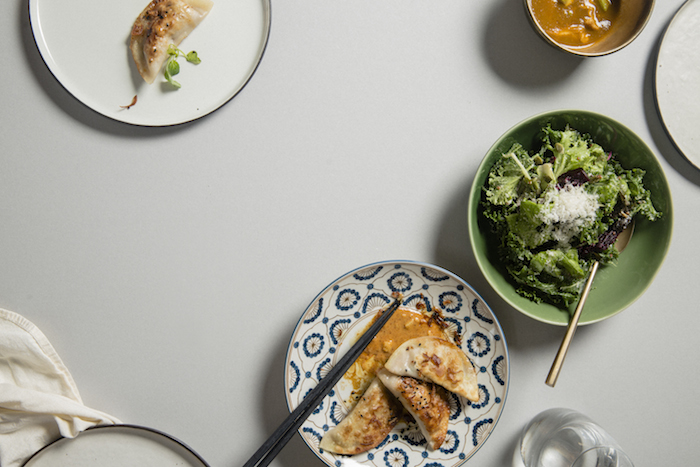 There’s a lot to love about Grassroots Pantry’s new Spring-Summer menu, from the clever popcorn “chicken” which uses hedgehog mushrooms to replicate the texture of chicken, to the earthy teff gnocchi made from shiitakes, but the dish I can’t stop dreaming about is the pan-fried gyoza accompanied by a lip-smacking dan dan dressing (HK$70). It’s not often I feel virtuous while eating gyoza, but these little poppers did the trick — packed full of cabbage, vermicelli and carrots, and accompanied by a subtle Szechuan peppercorn vinaigrette that brings a slight buzz to the lips. The gyoza is perfectly crisp without feeling greasy, but the thing that brings it all together is the smooth and creamy dan dan peanut sauce, elevating the gyoza from good to some of the best in town. And yes, I went back not more than a week later for a second round. —Leslie Yeh, Dining Editor Unbeknownst to me until very recently, Gia Trattoria serves one of the most fabulous weekend brunches in town, starring a drool-inducing buffet spread of imported Italian cheeses, olives, cured meats and more. The brunch set (HK$308 per person) gets you access to as much of that buffet as you want — you can order an appetiser instead, but that would be a mistake — plus a main dish of your choosing. There’s a variety of pastas and other dishes on offer; I had no choice but to order the lasagna verde Bolognese, my all-time favourite.

The preparation is classic here: sheets of pasta — made with spinach that imparts a green hue — layered with bechamel and the traditional meat sauce of Bologna. At Gia, the portion is generous, and it’s adorned with fried spinach leaves for added visual pizazz. As for the taste, it was so good that it made me angry I’d never had it before. You can bet I’ll be back for more, as this is now on my personal list of best dishes in all of Hong Kong. —Michael Alan Connelly, Editor in Chief When people ask what my last meal on Earth would be, the answer is always, without hesitation, omakase. There’s nothing more thrilling than celebrating each pristine ingredient bite by bite, and a recent meal at the newly re-opened Sushi Masataka (previously Sushi Rozan) was a strong reminder of this. Chef Masataka Fujisawa serves many of the traditional suspects in the dinner omakase (HK$2,080 for 14-15 courses, HK$2,980 for 18-20 courses) — otoro fatty tuna, monkfish liver, and steamed abalone with liver sauce — but a few of the preparations were out-of-the-box and completely intriguing.

Chef Masataka highlights the importance of knife work to Japanese cuisine with two unique preparations — the first is the three-slice toro, which chef suggests (and I agree) is the best way to consume this particular piece of fish, and the second is the squid, diced into small pieces instead of served as one whole slice per usual. This slight change in composition completely changes the look, feel and texture of the dish; barely larger than the individual grains of rice sitting below, the chewy, smooth squid blends seamlessly with the tangy red vinegar-scented rice below, offering a near-perfect variation on traditional squid nigiri. —LY 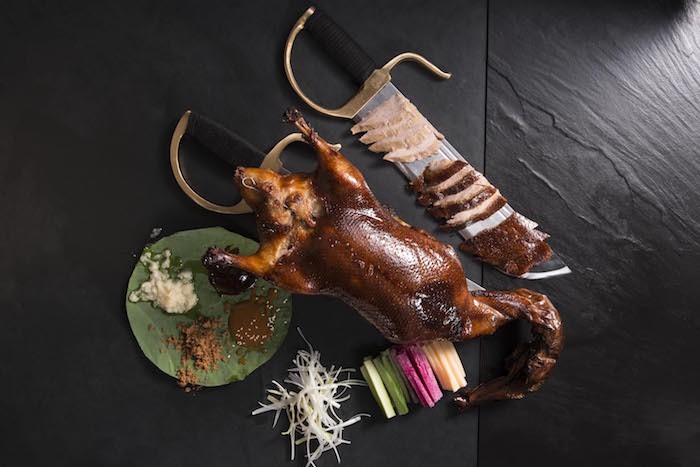 As a former resident of Beijing, I’m obnoxiously picky when it comes to Peking duck. In my experience, the worst duck you can have in the Chinese capital is better than the best you can find anywhere else, and that includes Hong Kong. The perfect Peking duck experience is dependent on every component being just right: crispy skin, flavourful meat, the proper condiments and sauces, and of course, the correct kind of pancake that can hold everything together. Most places outside of Beijing struggle to nail all of these components, which is why my recent dinner at Dragon Noodles Academy was such a surprise.

Quite simply, their whole Peking duck (HK$499) is the best I’ve ever had outside of Beijing, because every component tastes exactly as it should. In addition, the presentation is especially nice, with the duck divided into pieces of crispy skin, breast meat, and slices from the duck’s back featuring a combination of skin, meat and fat. This allows you to enjoy the duck any way you like, but the skin is meant to be dipped into sugar, the breast slices dipped into sauce, and the remaining slices folded up in pancakes with spring onion and cucumber. This heavenly Peking duck transported me to another time and place, and while I can’t promise it will do the same for you, I can almost guarantee that you’ll enjoy it very much. —MAC 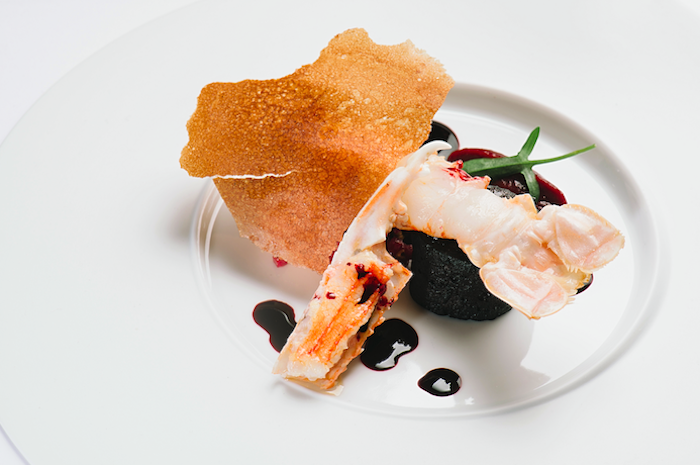 Chef Agustin Balbi may have left The Ocean recently to open Haku in Harbour City, but newly appointed Executive Chef Olivier Bellin is maintaining the high fine dining standards at the waterfront restaurant with his own unique twist. The newest eight-course degustation menu (HK$1,288 per person) draws heavily from the culinary traditions of Breton, while highlighting one of its most underrated ingredients, buckwheat, as the common denominator throughout the menu.

Each dish was unique in its own way, but I was particularly impressed by chef Olivier’s take on surf ‘n’ turf, elevating the concept to Michelin standards with pan-seared coral Brittany langoustine paired with black pudding and beetroot sauce. The slightly briny lobster is a whiff of the sea straight from the Brittany coastline, brought back to earth by the rich and dense boudin noir. A wafer-thin buckwheat lace cracker adds the finishing touch to this elegant creation. —LY A recent dinner at Rech by Alain Ducasse, the newcomer at the InterContinental Hong Kong, was nearly an overwhelming experience due to the variety of top-notch seafood served there, including Gillardeau oysters, Dover sole, and much more. (The non-seafood items are great, too, particularly the excellent desserts.) It’s a tough call, but if I had to choose just one dish that stood out most for me, it would have to be the Grenoblaise-style skate wing (HK$460). Skate is a fish you don’t often find in Hong Kong; the one served at Rech is imported from France and it’s pristine. True to the Grenobloise style, the skate wing is cooked in copious amounts of butter and served with lemon, capers, parsley and croutons. The richness of the butter is cut by the briny capers and the acidity of the lemon, so it’s not too rich, but it’s undeniably delicious. The price tag is a bit steep, but the high quality makes it completely worth it. It’s still cheaper than a plane ticket to France, right? —MAC The dish: Oysters with lime coconut soup and watercress jelly

Fans of the now-shuttered Isono at PMQ will be pleased to know that head chef Jaime Nuñez has recently slipped into a new role within Drawing Room Concepts as head chef of Ammo. It was my first time to this restaurant hidden up the hill from Pacific Place, and I immediately made a mental note to return with girlfriends for afternoon tea or brunch, with the gorgeous setting surrounded by trees and even a small creek bubbling below.

As a huge fan of Vasco and Isono, I had high expectations for the new menu — and it delivered without fail. Of special note were the oysters with lime coconut soup and watercress jelly (HK$138 plus 10%), demonstrating chef Jaime’s affinity for elevating fresh produce with a simple and elegant touch. The jet-fresh seasonal oysters were pooled in a frothy coconut soup, adding a touch of sweetness to balance out the briny flavour of the oysters. A bright, herbaceous watercress jelly added an extra layer of refreshment — the perfect palate cleanser to  introduce the meal.

Hong Kong New Eats Grassroots Pantry Best Restaurants Best Dishes The Ocean Where to eat new openings best bites Rech by Alain Ducasse what to eat
Leslie Yeh
Editor in Chief
Having worked as a lifestyle editor for almost 10 years, Leslie is thrilled to be writing about the topic she loves most: wining and dining. When she's not out pounding the pavement for the latest new restaurant opening or tracking food trends, Leslie can be found at home whipping up a plate of rigatoni vodka and binge-watching Netflix with a glass of Sauvignon Blanc in hand.
Dining Restaurants Food Trends Drinks Travel
Sign up for our newsletters to have the latest stories delivered straight to your inbox every week.