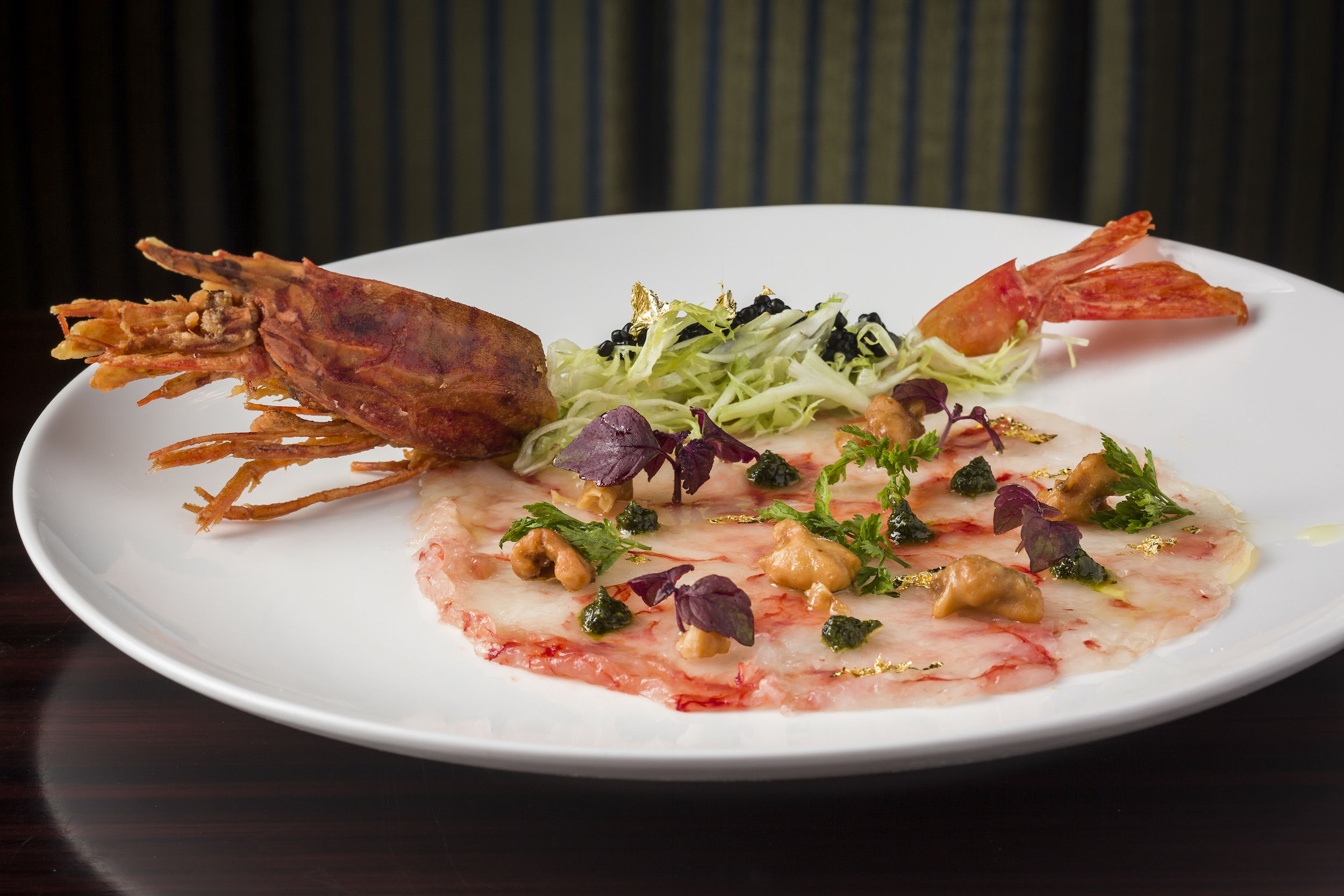 Best Bites: The top 8 dishes we ate in July

Food & Drink
Best Bites: The top 8 dishes we ate in July
Share this article
Next article Working in this industry, sometimes you can be so caught up with the latest and greatest that you forget that new is not always better; some of the most consistent and delicious food in our city is served up by restaurants that may have faded into the background next to shinier new openings. I was reminded of this at a recent lunch tasting at French-Japanese restaurant Le Rêve, a restaurant that’s flown quietly under the radar since opening in May 2016.

The multitalented head chef Israel de Freitas (we hear he’s somewhat of an artist, writer and chef extraordinaire in one) has crafted a seasonal set menu which combines Japanese ingredients with traditional French techniques for subtle, well-balanced and palatable dishes that linger in your mind long after the last bite is gone. My personal favourite was the “Zaru Soba à la chef”, which consisted of a twirl of chilled soba — retaining its toothsome, al dente bite — hiding bits of umami-laced miso-marinated diced fish under a cloud of wasabi “air”. Simple, yet impactful in its clean flavours and elegant execution. —Leslie Yeh, Dining Editor 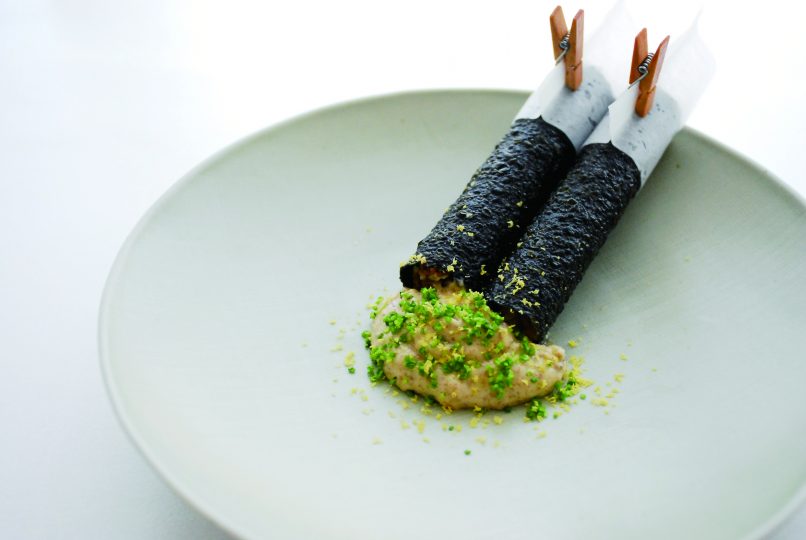 Over the weekend, Michelin-starred chef Vicky Cheng of VEA welcomed Michelin-starred chef Jungsik Yim to Hong Kong for a two-night collaboration, during which the chefs showed off their signature styles in a 10-course menu. Seats for the dinners sold out early on, but I was fortunate enough to be invited to a five-course preview  of the menu last Thursday. It’s always a treat to eat anything chef Cheng has prepared, but I was especially excited to try chef Yip’s food, having never visited his eponymous establishments in Seoul and New York City.

With such strong talents at the helm, it goes without saying that each course was as spectacular as the next. However, I’ve been unable to stop thinking of chef Yip’s take on kimbap, the humble seaweed rice roll that’s very common in Korean cuisine. This high-end version starts with seaweed that is dried and lightly fried, then filled with bulgogi and rice seasoned with truffle oil. That would be tasty enough on its own, but the rolls were served with a truffle-kimchi dipping sauce, offering all sorts of savoury-umami-packed pleasures in each bite. You can bet that a visit to Jungsik will be on my itinerary next time I go to Seoul, and I suggest you consider doing the same. —Michael Alan Connelly, Editor in Chief I’m a sucker for good bread, and I think I may have just found my new favourite loaf in town. Enter 12,000 Franc’s homemade malted sourdough bread — a gorgeous dark loaf which checks off all the requirements of a good-quality baguette: a rustic, well-formed crust shattering to reveal a pliable, soft crumb, bearing an aroma that hits your senses as soon as you break it open. Add to that the nutty fragrance imparted by toasted barley malts and the dense, almost sticky texture from a long rise, and this has to be one of the most fragrant and addictive loaves in town. Good thing only one serving arrived for our party of three — stopping me from slathering the whole loaf in decadent French butter and polishing it off in one go. —LY 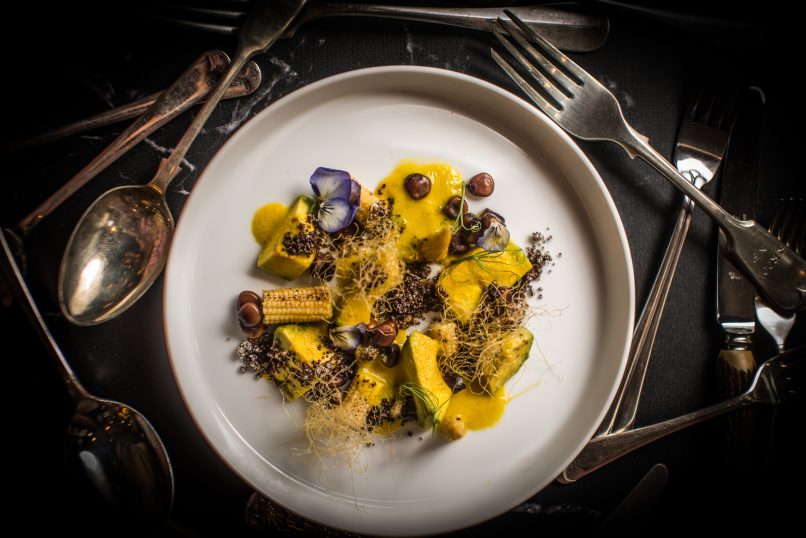 Gough’s on Gough bills itself as a Modern British restaurant — that’s accurate, for the most part, and it’s very good — but in my opinion, the most memorable dish from the summer tasting menu has absolutely nothing to do with Anglo cuisine. Described simply as “purple corn, avocado, kaniwa”, the show-stopping dish comes early in the meal, but it’s not one you’d forget by the end of the meal. Inspired by chef Arron Rhodes’ time living and working in Peru (including at world-famous Lima restaurant Central), this beautifully composed dish is a wonderful taste of New World flavours: ripe avocado; purple corn from Peru; an ancient grain called kaniwa, similar to quinoa, served crispy here; and leche de tigre, the citrus-based marinade used to make Peruvian ceviche. With its bold, surprising flavours and contrasting textures, this dish transported me to another place, and I hope chef Rhodes will continue to draw upon his experience in Peru for future inspiration. —MAC Few people know that Lai Chi Kok’s D2 Place houses a fantastic Chinese restaurant, Greater China Club, on its top floor; even fewer know that within the venue is another restaurant, Cadenza, serving up Western fare for those who’re craving pasta instead of Peking duck. I’ve had the pleasure of dining at both, and with new executive chef Kwan Wai-Chung onboard, my most recent visit to Cadenza showed a marked improvement in the food offerings (the Chinese side, meanwhile, has always been stellar).

Formerly the chef de cuisine of now-shuttered Harlan’s Bar and Restaurant at IFC, chef Kwan shows aptitude with Italian ingredients and cooking methods in dishes such as linguini with clams and garlic, chanterelle mushroom risotto with rocket and Pecorino, and roasted French spring chicken with lemon and thyme. The standout, though, comes at the start of the five-course tasting menu: two excellent carpaccios offered as a teaser. The first features a disc of red-veined, flattened raw prawns, dotted with creamy sea urchin and walnuts in a tangy herb vinaigrette; the second is another stunning ensemble of premium USDA beef given an earthy jolt with wild mushrooms, shallot and parsley coulis. My advice? Order both and go half and half with your dining companion. —LY Accommodating only eight diners at a time, Sushi Masataka (formerly Sushi Rozan) offers a wonderfully intimate and authentic omakase experience in Wan Chai. My recent lunch there featured a lineup of 21 items, from grilled eel to monkfish liver to fish bone soup to Japanese grapes. Anyone who loves the purity of Japanese cuisine will find the overall experience is exquisite, and this is one case where the sum is greater than its parts, so it’s hard to choose just one standout item. That being said, the serving of fatty tuna known as toro is pretty special here. Rather that serving a single thick piece of the fish atop a mound of rice, chef Masataka Fujisawa prepares three thin slices and they layers then atop the rice, which he feels is the best way to enjoy this particular cut. The deliciously fatty flavour isn’t affected, but the surprising texture somehow makes toro more enjoyable than ever, which is no small feat. —MAC The dining room at The Pawn strikes a delicate balance between relaxed and sophisticated dining, which makes it work for more casual weeknights and celebratory weekend dinners alike. Its newly revamped à la carte menu also adds to the convivial vibe, transforming beloved dishes and adding new ones in the form of larger sharing portions. One of our favourites at a recent visit was the slow-braised short rib. Not exactly a new dish by any means — having been introduced during The Pawn’s extensive refurbishment in 2015 — but its new size (massive, easily shared between four) and presentation (rustic, in a cast-iron pot) combines comfort flavours and execution that just works.

The short rib easily slips clean off the bone at the gentlest touch, always a sign of a perfectly cooked cut of meat. The cut itself was already excellent, with an even distribution of tender meat and gloriously gelatinous fat to create one juicy bite after another. (Slice it against the grain and the texture almost mimics a perfect cut of top-quality salt beef or ox tongue in its bouncy tenderness.) Fried to attain a thin, crispy sear on the outside, the short rib is combined with the sweetness and crunchiness of deep-fried shallots and onions for pure comfort and meaty indulgence in your mouth. Topped off with a silky and generous portion of buttery bone marrow, and it’s a no-brainer that you’ve got one of the most satisfying mains in town. —Evelyn Lok, Associate Editor Fang Fang is a restaurant that could easily run the risk of falling into a cookie-cutter mould: It’s in a prime location, boasts standard contemporary Asian bistro decor, and harbours a long cocktail and food list with crowd pleasers such as Peking duck and tipples served in cute panda cups. Nevertheless, we were impressed by the solid execution and bold flavours that extend beyond your typical Modern Asian eatery — with a few mixed-influence items that work particularly well.

The Fang Fang-style paneer is one standout example, substituting chicken or tofu for cubes of Indian paneer to achieve a light and crumbly texture. The subtle taste of the paneer is emboldened by the punchy doujianbang bean sauce, which slicks all of the ingredients in a glossy film and adds plenty of umami depth. Crunchy lotus-root chips, nutty cashews and bird’s eye chillies round out the medley of textures and flavours. This is undoubtedly one of the dishes that’s making “fusion food” relevant again, or at least getting us pleasantly reacquainted with it. —LY

Hong Kong Dining Restaurants The Pawn Best Restaurants Best Dishes VEA Vicky Cheng Where to eat VEA Restaurant and Lounge best eats best bites 12000 Francs sushi masataka greater china club fang fang gough's on gough jungsik le reve Jungsik Yim
Leslie Yeh
Editor in Chief
Having worked as a lifestyle editor for almost 10 years, Leslie is thrilled to be writing about the topic she loves most: wining and dining. When she's not out pounding the pavement for the latest new restaurant opening or tracking food trends, Leslie can be found at home whipping up a plate of rigatoni vodka and binge-watching Netflix with a glass of Sauvignon Blanc in hand.
Dining Restaurants Food Trends Drinks Travel
Sign up for our newsletters to have the latest stories delivered straight to your inbox every week.