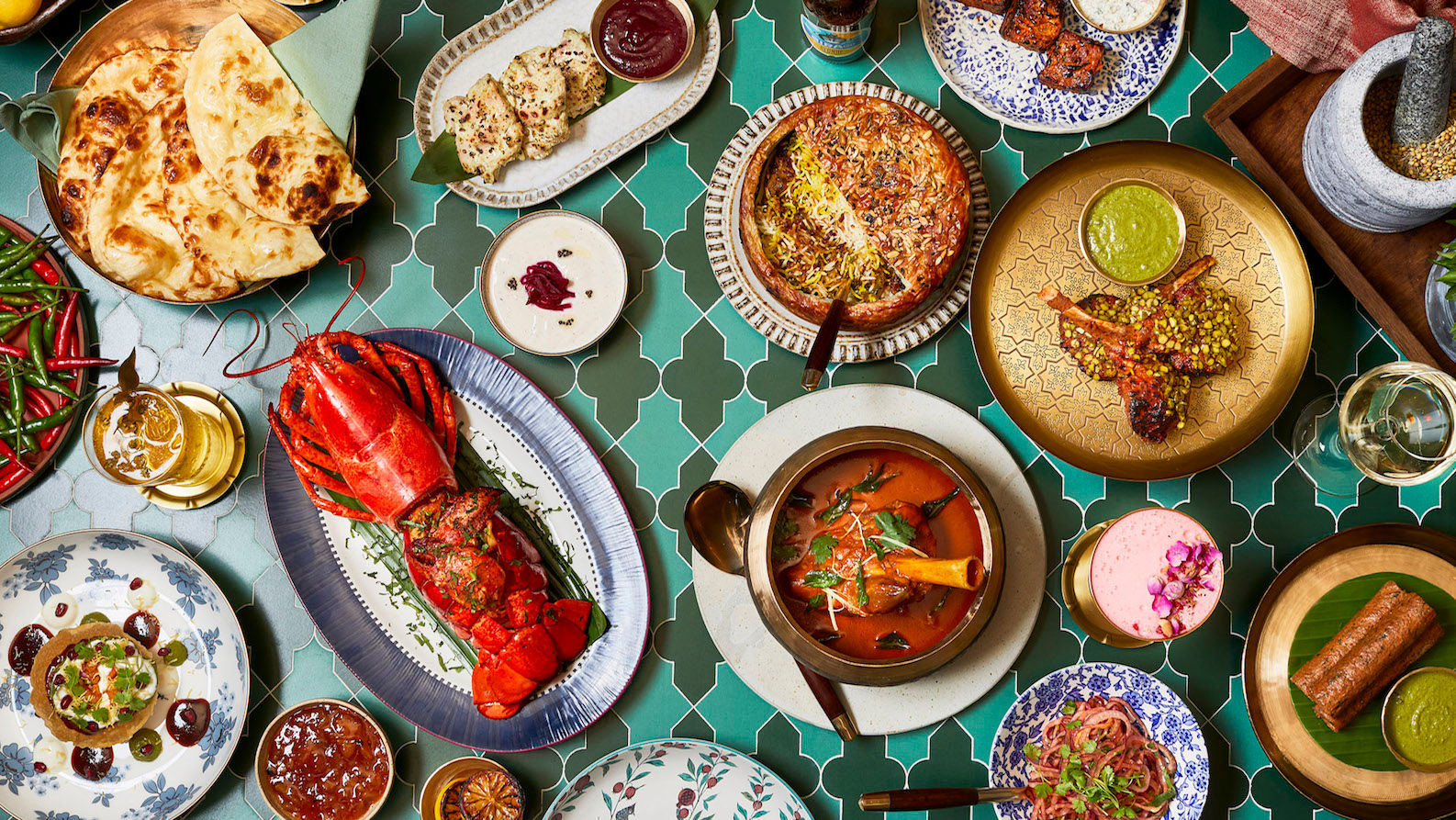 Food & Drink
Best Bites: The top 9 dishes we ate in June 2020
Share this article
Next article

Best Bites is a roundup of the outstanding dishes we had within the last month: those which renewed our love for established venues; caught our attention at a new opening; or freshly impressed upon us the creativity and skill of Hong Kong’s talented chefs. From casual street snacks to meticulously prepared tasting menus, these are the plates we’d recommend for you to make a special trip.

Nestled in the corner of K11 Musea’s 7th floor sits the newly opened Yè Shanghai, a stylish and modern salute to the eponymous Chinese city’s rich, flavourful cuisine. The Michelin-starred Shanghainese restaurant by Elite Concepts not only provides a lush environment in its 150-seat location, but also gives diners a fabulous view of the Victoria Harbour as they enjoy their meals.

Although I’m not the biggest fan of seafood, their baked stuffed freshwater crab shells are a dish that I wouldn’t mind eating over and over again. Oddly enough, there was little to no complexity in the flavours — it was just a simple dish of baked crab layered over fluffy egg whites to lighten up the dish, and was overall a delightful mid-meal treat. —Aydee Tie, Head of Marketing

Even at our preview ahead of Chaat’s official opening, we were already thrilled about chef Manav Tuli’s homemade paneer cheese (HK$160; pictured above with Malai Grouper Tikka, HK$288) that stars on the menu. Posed with the hard task of picking favourites at our recent formal visit to Chaat, this one was certainly the dish we had high hopes for and it did not disappoint. Distinguishable by its creamy yellow hue as opposed to the white kind you can buy at the store, Chaat’s paneer incorporates turmeric in the mixture for a subtle sweetness and colour. Each fat, pillowy cube of cheese is filled with a mix of sweet and zingy chestnut, tomato and caramelised onions before they’re grilled, lending a lightly smokey aroma in every bite. — Evelyn Lok, Managing Editor

Love slurping Mashi no Mashi’s noodles but the 30-degree weather outdoors is killing your ramen vibe? You’ll have to try the limited edition no-broth Wagyujiro bowl the next time ‘Wagyujiro Night’ rolls around — normally held as a pop-up takeover during the last Friday and Saturday of the month.

Designed back in February by chef-proprietor Hisato Hamada after he was inspired by a bowl of Ramen Jiro ramen — what ramen fanatics will recognise as a tonkotsu-fueled cult in of itself — Hamada then sought to create a decadent wagyu-focused bowl, and the Wagyujiro was born. From the concentrated bone broth that’s been simmered into a thick sauce, to the thick cuts of eight-hour-cooked wagyu brisket cha shu, this dish is a behemoth filled with all the most decadent ingredients. Topped with a healthy mound of cabbage, wagyu fat trimmings, extra garlic and an orange yolk, this is the Mashi no Mashi tsukemen on steroids, made to mix in the bowl and slurp up. Stay tuned for the next pop-up here, and go easy on lunch before trying this one. — EL

I’m not often in the habit of recommending pop-ups where readers have no way of attending after the fact, but on the strength of his cooking alone, I feel obliged to give a shout out to Chef Antimo Maria Merone, who usually holds fort at 8½ Otto E Mezzo Macau. Like many who nominally reside in Hong Kong, the dashing Neapolitan has been unable to return to his usual workplace because of the Coronavirus-backed border closure. In the interim then, his solution has been to set up a ‘Chef’s Table’ at Ciak, from where diners can sample a seven-course menu (HK$1,880), almost entirely composed of original recipes you won’t find at Otto E Mezzo Macau. Reception has been reportedly extremely positive — the June pop-up was “fully sold out” a week in advance — and on that proviso, I’m confident we’ll be seeing future iterations of ‘Chef Antimo’s Table’.

One hopes that amongst the dishes we’ll be seeing again is this Linguine ‘Gentile’: Chef Merone’s indulgent riposte to the classic spaghetti con la bottarga. Behind its apparently simple presentation belies the considerable amount of prep work that goes into making this dish so enjoyable. The team manually harvests the roe from a whole skein of mature salmon, proceeding to marinate the silken orange pearls in a mixture of sugar, salt, and vermouth. Around the same time, fresh garlic is blitzed together with almonds (that have been soaked overnight) in order to obtain a dairy-free ‘cream’ of sorts, capable of softening the accompanying salmon roe’s rich briney tang yet without fading from view. These elements are then spooned over a tangle of linguine (sourced from organic pasta maker Gentile, which has roots dating back to 1876). Just several seconds’ cook time from being firm, they have a satisfyingly bouncy texture and mild sweetness (reminiscent of wholewheat cereal) that coheres wonderfully to the rest of the dish. — Randy Lai, Editor

It may seem silly that my highlight from the newest teppanyaki restaurant in town is indeed a cold appetiser — rest assured, all the other lavish courses (part of a Deluxe set menu at HK$1,188 per person) were just as memorable, though my mind was just blown by how simple and gorgeous this peeled Japanese fruit tomato was as a starter to a decadent meal. Famed for its sweetness, these red jewels from Tokushima need no other dressing — not even the Japanese sea salt that accompanies it — for the diner to appreciate the perfection inherent in such a plant, as is. It just totally exemplifies the restaurant (and chef Toru Takano)’s insistence in using impeccable produce all across the board, and does the job of whetting the appetite before the main event. — EL

Served with elegant slices of fresh, sweet figs and dots of rose jam, this pistachio panna cotta (HK$95) was a light yet satisfying end to a tasty meal at The Continental, which is currently celebrating Swire Restaurants’ fifth anniversary with a series of tasting menus at each of its venues.

I’m normally indifferent to milky, plain panna cottas, but this light green iteration had me inhaling the whole thing in minutes, thanks to its featherlight texture and a lovely rounding creaminess — not to mention that subtle mix of sweet-and-savoury offered by the pistachio. Why hadn’t anyone thought of this simple pairing before? Upon wrapping up my meal I also learned the great news that the restaurant group has just launched a 20 percent off discount for members of its mobile rewards programme, which almost justifies us ordering a second one. — EL

You might also like…
Food & Drink
7 delicious under-the-radar Cognacs that will set you back less than HK$1,000 apiece
Food & Drink
Restaurant Revisited: At Lobster Bar and Grill, neo-classic bistro cooking sails smoothly off the plate

Imagine the most satisfying wish you ever made that came true: It felt like that after I devoured The Chicken Bar‘s New Orleans hot chicken ‘sandwish.’ Tucked inside SoHo’s dining destination H Code, The Chicken Bar’s signature dish is a simple but hearty affair: clamping hefty breaded fried chicken between lightly toasted sliced bread. The chicken is doused in with a blend of spicy sauces and seasoning, with meat still perfectly tender and extremely juicy. Taking a bite of this sandwich was like the best kind of kick in the mouth you could ask for. — AT

Dedicated to preserving old school Cantonese cuisine for the millennial age, Yung’s Bistro is helmed by the third-generation scion of family-owned Yung Kee (currently under renovation this summer). During my visit, I was floored by the reinterpretations of some of the restaurant’s most famed dishes, but what really won me over was this mui choi kau yuk, or braised pork with preserved vegetables in soy sauce (HK$320).

Using Yvonne’s own mother’s recipe, this dish is not only famous in Cantonese cuisine for its decadence in using super fatty pork, but also for its laboriousness — where the pork is traditionally deep fried, rather than par-boiled as many establishments tend to do these days (which ruins its flavour), before slow-braised in sauce together with preserved vegetables. Here they use the traditional method, which imparts an awesome texture where each slice of pork still keeps its shape, but offers an utterly melt-in-your-mouth tenderness once you bite into it. This is also thanks to the superior cut — using a rare UK Berkshire black pig that is locally raised in Yuen Long. Together with the silky soy sauce that’s full of umami and not too salty thanks to it melding its flavours with the subtle sweetness of the preserved vegetables, you’ve got a winning dish on your hands. Order lots of rice — you’ll want to have it to soak up all that delicious sauce. — EL

Trust chef Mingoo Kang (of two-Michelin-starred Mingles fame) to piece together two of Korea’s most recognised dishes into a stunning contemporary presentation. At his newly opened Hong Kong venture Hansik Goo (currently soft-opened with a eight-course tasting menu), the classic ginseng chicken soup, or Samgyetang, is transformed into a soupy risotto dish: New Territories chicken is turned into an elegant and juicy roulade, with the skin fried until crispy as an homage to the popularity of Korean fried chicken. This sits on top of a bed of creamy Korean glutinous rice that soaks up a flavourful chicken broth, drizzled with a few drops of chilli oil for a subtle flash of heat. — EL

Dining CIAK Food & Drink chaat Hansik Goo Mashi no Mashi
Randy Lai
Editor
Having worked in the Australian digital media landscape for over 5 years, Randy has extensive experience in men's specialist categories such as classic clothing, watches and spirits. He is partial to mid-century chronographs and a nice chianti.
Style Watches Drinks Tailoring Travel
Sign up for our newsletters to have the latest stories delivered straight to your inbox every week.