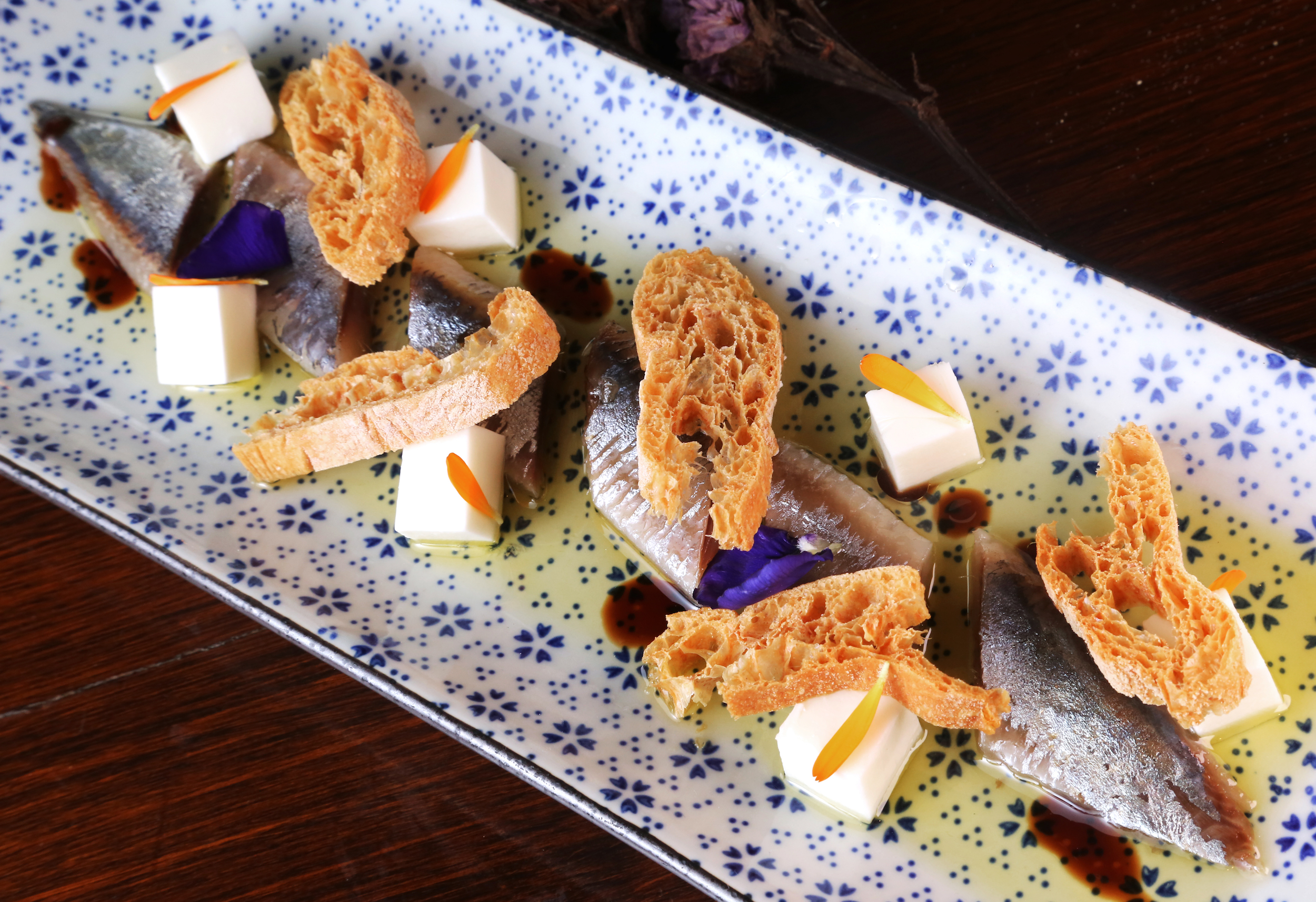 Best Bites: The top 10 dishes we ate in April

Food & Drink
Best Bites: The top 10 dishes we ate in April
Share this article
Next article 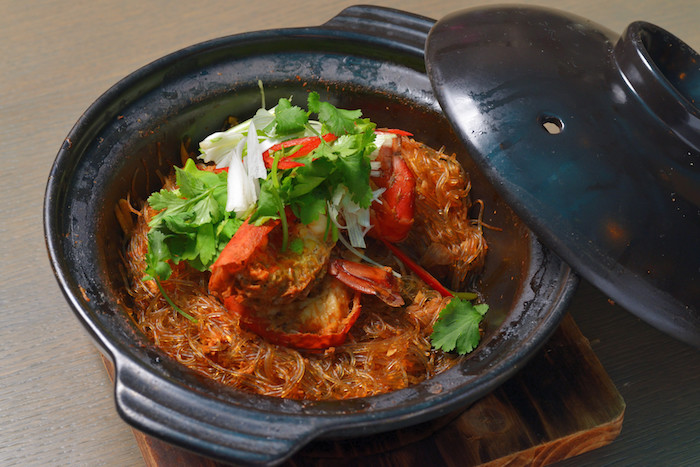 The dish: Baked prawns with glass noodles in claypot

There’s something so wonderful about a claypot dish — from the way you know it’s going to arrive piping hot, to the textural contrast that’s achieved with the juicy bits gathering at the centre and the crispy, slightly singed edges. The baked prawns with glass noodles at Thai spot My Tai Tai is one of those deeply satisfying one-pot dishes, packed full of flavour from a handful of chillies and spice pastes thrown into the mix, with the slippery, glassy strands catching the little savoury bits of stir-fry that get caught up in the tangle. The prawns on top are meaty and delicious, having soaked up all the flavour of the dish without becoming overcooked or rubbery. I’d recommend going for the semi-buffet dinner where you can have the prawns as your main (HK$368), served with a delicious spread of Thai salads, appetisers, and desserts. —Leslie Yeh, Dining Editor 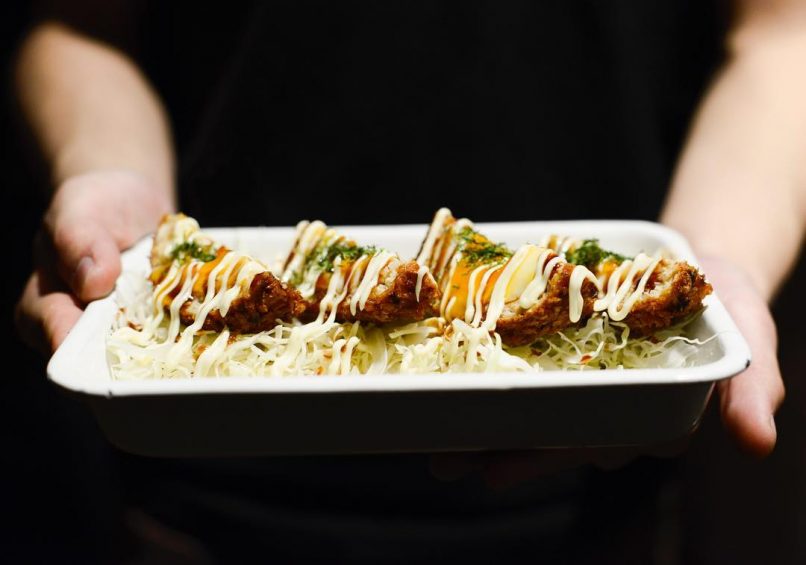 I was gutted, one recent Saturday night, to arrive at Yardbird and learn that they had just sold their last katsu sando of the evening. Had I tried the Scotch egg (HK$110), one helpful staffer wondered; I had not, so I ordered it. My disappointment quickly turned to elation once this beauty arrived in front of me. The Yardbird team have taken the classic British pub snack and given it the okonomiyaki treatment, drizzling it with kewpie mayo and tonkatsu sauce, and serving it on a bed of cabbage. With its crispy exterior, meaty interior, and saucy goodness, this Scotch egg ticks all the same boxes as the katsu sando, but it achieves its own, possibly higher, level of greatness. This is an inspired dish, and an irresistible one. —Michael Alan Connelly, Editor in Chief 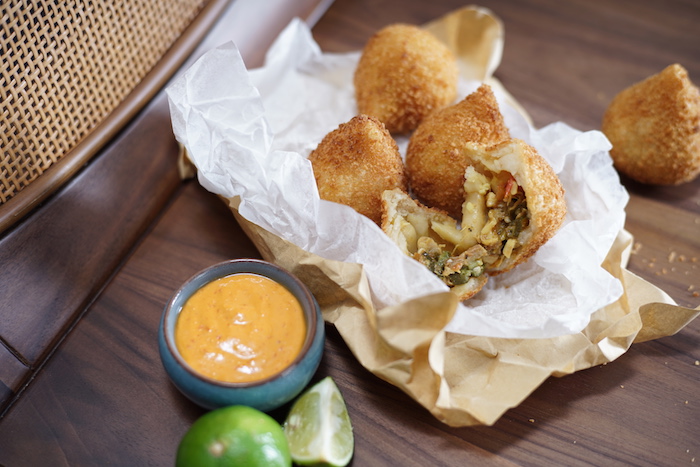 The dish: Chicken and okra dumplings

Newly opened Uma Nota serves up Brazilian-Japanese food from São Paolo, home to the largest community of Japanese outside of their home country. I recently stopped by to check out the menu and came across these delicious chicken and okra dumplings (or coxinha as they’re known in Brazil) that are absolutely addictive. It seems simple, but not all croquettes are made the same, and these hit the spot for me: the perfect ratio of filling to potato mash, with a delicately crispy shell that doesn’t feel heavy or oily. The filling of shredded chicken, okra, and peppers is generously seasoned, and a small pot of chilli mayo on the side is the perfect dipping partner. Not everyone has jumped on the Brazilian/Peruvian-Japanese trend, but this is one dish I’m sure we can all get behind. —LY 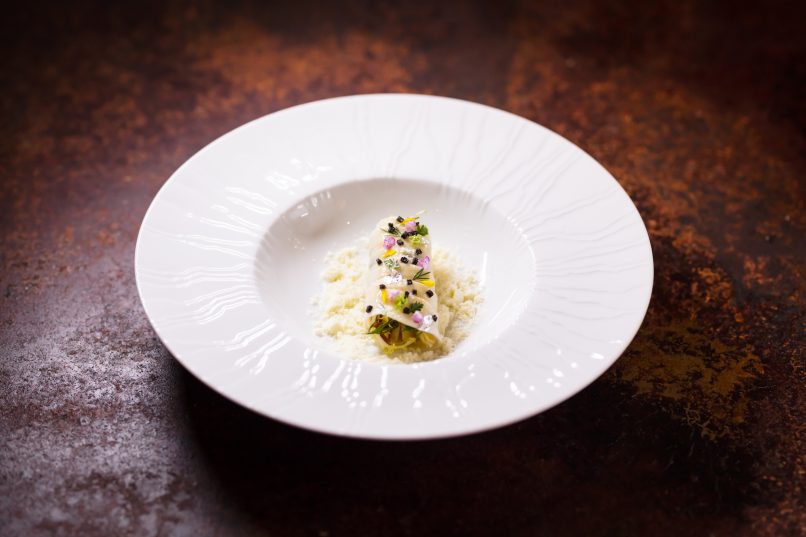 Last November, I wrote about the pleasures of the charcoal-grilled Japanese wagyu tenderloin at Wagyu Takumi. Fortunately, you can still enjoy that immensely satisfying dish, exactly the same as it was before, at what has been recently renamed Takumi by Daisuke Mori. On a recent visit to check out the revamped space and sample the new lunch menu, however, I was simply wowed by this asparagus appetiser, which is quite possibly the prettiest dish I’ve ever eaten. Adorned with herbs, edible flowers, and edible silver foil — a refreshing surprise, for someone who regularly ingest gold leaf — this salad roll sits on a mound of “snow powder”, which is really a white asparagus mousse. While the presentation was ornate, the flavour was pure and simple, allowing the asparagus to shine. This is a beautiful dish in every sense, one that reflects the talents of chef Mori (available on both the 4-course and 6-course lunch menus, HK$780 and HK$980, respectively; as well as the 8-course dinner menu, priced at HK$2,080). —MAC 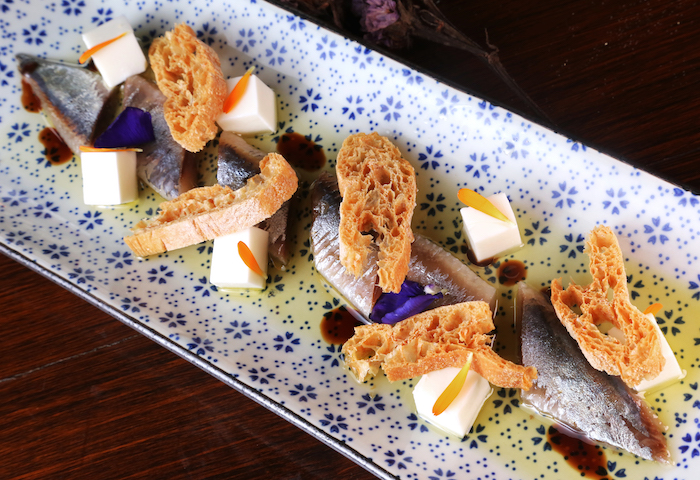 I’m a sucker for Spanish food, and Catalunya consistently serves up some of the best in the city, with a string of staff hailing from the legendary, now-shuttered elBulli in Catalonia, Spain. Succeeding Alain Devahive Tolosa and Josep Casas, the latest exec chef is also an elBulli alum, Barcelonian-born Ferran Tadeo. Under his direction, the kitchen is getting a revamped menu with a number of new dishes that should delight Catalunya’s loyal fans.

There’s a lot to love about Tadeo’s new menu, and I couldn’t well choose between the carabineros with walnut ajoblanco or the smoked sardines with goat cheese for this list. Trust me when I say it’s all very, very good. But while the carabineros rely on two very top-notch ingredients already — Spanish red prawns and caviar — to impart delicious flavour, the smoked sardines are a little less obvious, and thus a prime contender for this month’s best bites. It’s really very simple, but the dish comes together as something greater than the sum of its parts, with the tanginess from the goat cheese, the smokiness of the sardines, and the fruitiness of high-quality olive oil making for one of those delectable bites that you want to have over and over again. —LY 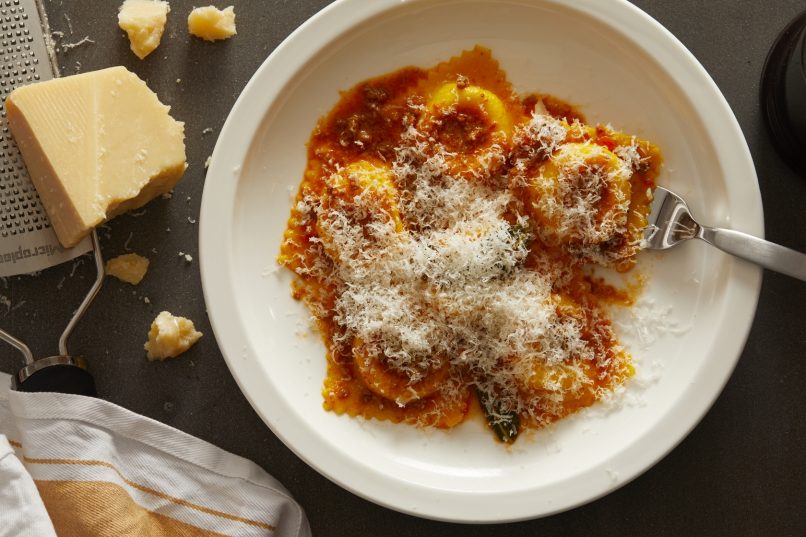 Lo and behold, I finally made it to Pici, and it was certainly worth the wait. The Pirata Group newcomer is all about good vibes, from the convivial setting to the warm lighting to the handmade, well-priced pastas. Though I very much enjoyed the vitello tonnato (HK$85) — slices of veal with tuna-flavoured mayonnaise, an Italian dish I’ve never seen elsewhere in Hong Kong — and the generous serving of lasagna (HK$120), the standout dish for me was the liquid Parmesan ravioloni (HK$120), a filled pasta that is slightly larger than the more common ravioli. In this case, the pasta is filled with an incredible cheese sauce, and it’s good enough to eat on its own. However, the kitchen tops it with butter, sage, and a beef ragu, making every single bite a flavour explosion. Don’t be surprised if you find yourself ordering a second portion — it’s that good. —MAC 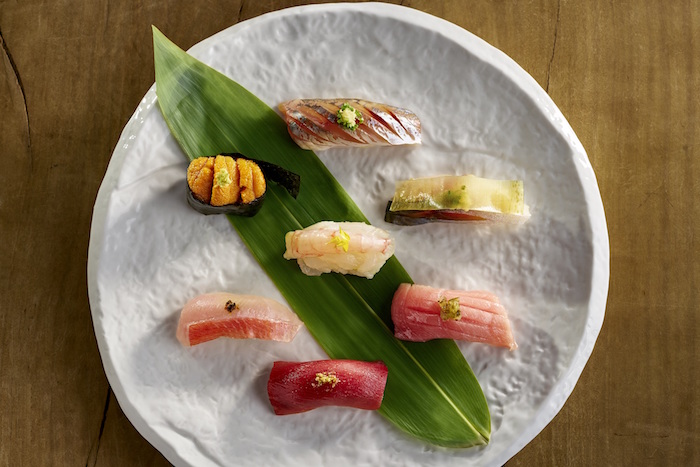 With countless Japanese restaurants in the city, many of them bearing a similar resemblance, it’s often hard to differentiate one from the next. Inakaya already gets a leg up on the competition with its unbeatable views on the 101st floor of ICC, commanding one of the best settings for a Kowloon-side lunch. Given this, I expected their executive sushi lunch set to offer less value-for-money than some of the hole-in-the-wall spots around Hong Kong Island, but was pleasantly surprised to find this wasn’t the case.

For HK$480, the lunch set includes an appetiser, vegetable tempura, steamed egg custard, a plate of 10–12 assorted sushi, udon noodles and a dessert. It’s almost enough to share between two, and you get a fantastic birds-eye view of Hong Kong to match. The nigiri was heavenly — thick slices of fatty toro, ruby red maguro, yellowtail, mackerel, botan shrimp and sea urchin were just a few of the delights to be found on the plate. It’s pretty as a picture, so make sure you snap up a shot first before chowing down on a satisfying yet virtuous lunch. Sitting amongst the clouds, the only hard part is having to drag yourself back to the office. —LY 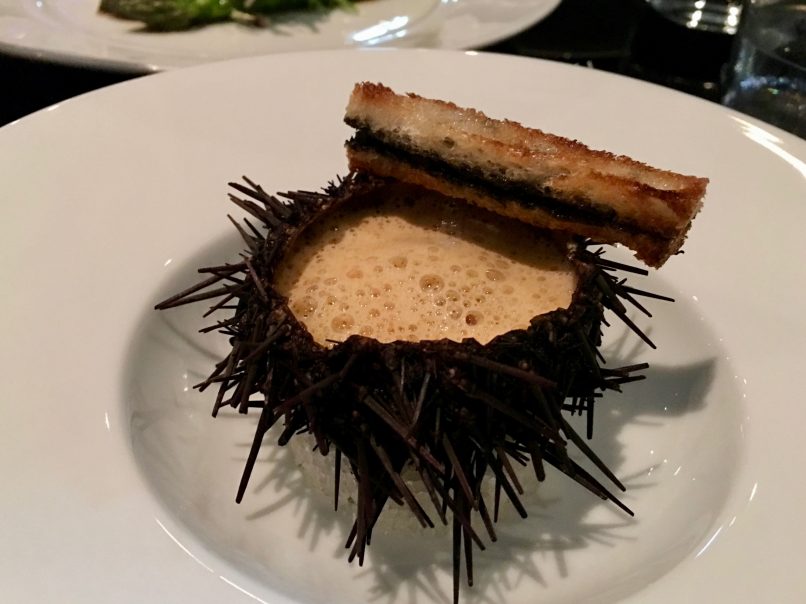 Is it just me, or are appetisers often more exciting than mains? Consider this recent example, a starter at chef Philippe Orrico’s ON Dining Kitchen & Lounge, which handily appealed to my love for uni. Inside the spiny shell of a sea urchin, the chef combines the briny notes of uni with a bit of richness from quail eggs (HK$398). I devoured it all with a spoon and then scooped up the remnants with a truffled mouillette (a finger of bread, en français). This was the perfect start to the meal — it would be the perfect start of any meal, really — but note that it’s only available in limited quantities each day, so call ahead if you’re keen on it. —MAC 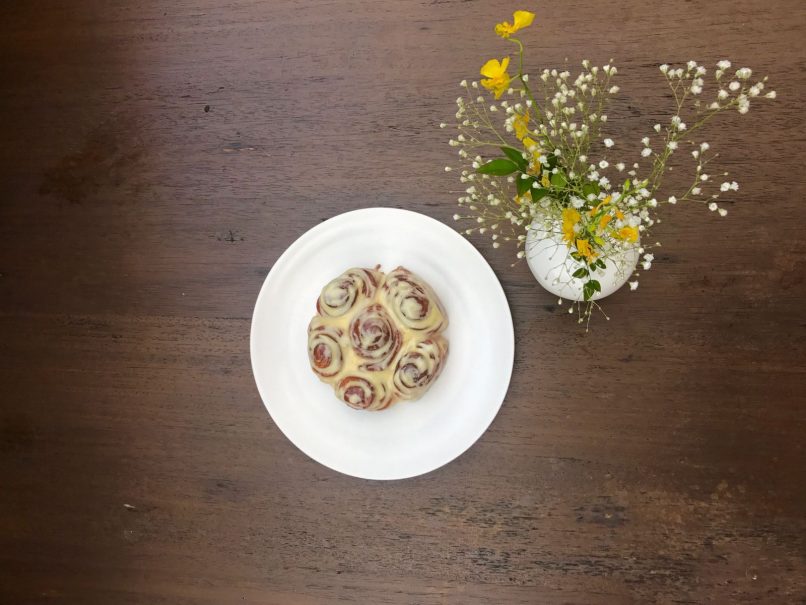 Last month I raved about Mercato’s pizza, and this month I’m raving about one of their brunch offerings — sorry, not sorry. For weeks, I had heard rumblings about a cinnamon bun that was only available at brunch, so I went in to try it one rainy Sunday afternoon. Much to my surprise, the cinnamon bun I had heard so much about turned out to be an entire tray of cinnamon sticky buns (HK$78), six of them to be exact.

Compared to the overly sweet, greasy gut bombs sold internationally by Cinnabon, Mercato’s buns taste more refined, with less sugar and oil, though that doesn’t make them any less delicious. The buns are served with cream cheese frosting on the side, so you can apply as much or as little as you’d like, which also helps to control the guilt factor. One bun is plenty for one person, so this is an ideal order for a group, but if you have leftovers, make sure you have them packed to take away, as they’re a great treat to bring to the office the next day for your colleagues to enjoy. —MAC

Normally I wouldn’t include a dish that was only served once, but I’m writing this in hopes that chef Chris Grare might consider adding it to his brunch menu at Lily & Bloom. For the first Chef vs. Pan brunch event held at La Paloma, Grare filled a gigantic paella pan with chorizo, spicy lobster stock, asparagus and mushroom fricasée, and 40 eggs — a dish he called “one pan egg” — which was divided into smaller portions for guests to enjoy, as shown above. I’d describe it as a spicy stew, in which the fat from the chorizo blended perfectly with the lobster flavour, resulting in a dish that made me want to soak up every last bit with some bread; the egg only added to the dish’s unctuousness. Here’s hoping it sees a revival sometime soon — hint, hint. —MAC

Hong Kong Dining Restaurants Catalunya Yardbird Best Dishes ON Dining Kitchen & Lounge La Paloma Inakaya Where to eat My Tai Tai best eats best bites mercato pici uma nota Takumi by Daisuke Mori
Michael Alan Connelly
Head of Digital Content
A Chicagoan by birth and a New Yorker by habit, Michael has more than a decade of experience in digital publishing at leading titles in the U.S. and Asia. When he's not checking out Hong Kong's newest restaurants and bars or jet setting around the globe, you'll find him hanging out with his dog Buster and enjoying an Aperol Spritz.
Travel Hotels Restaurants Cocktails Culture Italy Art Music Cheese