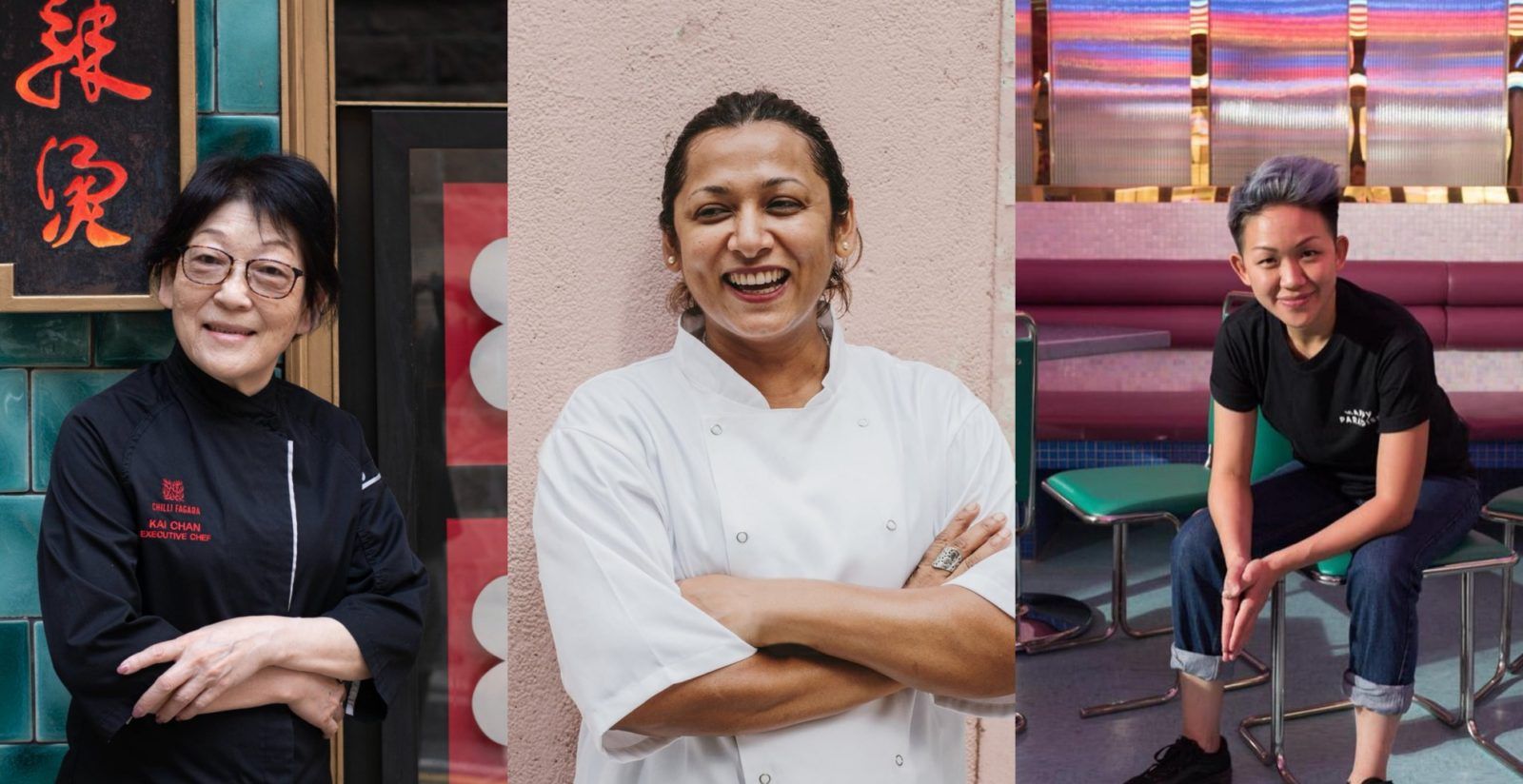 12 female chefs in Hong Kong to know about (and follow!)

Food & Drink
12 female chefs in Hong Kong to know about (and follow!)
Share this article
Next article

The restaurant industry, like so many others, is a male-dominated one, typically credited to a working environment that’s apparently too laborious, too tiresome, too intense — so they say. While there’s no doubt surviving the restaurant scene is tough work, these female chefs in Hong Kong has soared beyond navigating hot stoves and proven this ancient theory all so wrong.

Good food is good food — it’s as simple as that. And these undeniable talents create stunning, inventive dishes that push the boundary of simple cooking and have earned top marks at some of the city’s best restaurants. Some have won titles like Asia’s Best Female Chef, others run Michelin-starred kitchens, and all are passionate individuals who showcase their amazing craft and bring extra joy to the city’s food scene.

The unveiling of the renewed Ho Lee Fook 2.0 is not only informed by a spectacular overhaul of gleaming new interiors, but by head chef ArChan Chan’s inventive Cantonese recipes as well — XO cheong fun, Live Razor Clams (her childhood favourite) and Hong Kong-signature Stir-fry King are just some tasters her new additions. Aimed to rewrite the rules of traditional Cantonese cooking, ArChan has struck balance between the comforting essence of Chinese cuisine and keeping to Ho Lee Fook’s irreverent nature. Follow her for snapshots of hearty homemade meals and a look into to some of ArChan’s favourite ingredients.

You’ll know a Vicky Lau creation when you see it: artful, mouthwatering, with an exorbitant amount of attention to detail. While this kind of savoir-faire is left to the tables of two-Michelin-star Tate Dining Room and newly opened Mora, the Asia Best Female Chef 2015’s page is a humble dedication to snapshots of the city, many of which play inspiration to Lau’s signature one-ingredient “Ode” menus, a theme that has continued in her captions: “Ode to Hong Kong” and “Ode to Street Markets” posted a couple years back. While not regularly updated — pretty pictures of new dishes are displayed at the restaurant’s own respective pages — follow her for intimate insights of her day-to-day doings.

The one most responsible for putting the cool back into the humble bao, May Chow approaches Chinese and Cantonese cooking in inventive new strides, as shown on the menus of Little Bao and Happy Paradise. Named Asia’s Best Female Chef in 2017 and having starred in various culinary shows including Top Chef US and MasterChef Asia and UK, May’s page reflects her passionate dedication to delicious food (many of which are current menu items), pop-up happenings as well as sweet snapshots of her amazing team, industry friends and her musically talented fiancé.

Whatever praise you were thinking of passing along to chef Maxime Gilbert of two Michelin star Écriture, pass half to chef de cuisine Heloise Fischbach, too. The French-native left her Parisian home in 2016 for Hong Kong, beginning as sous chef of the refined French establishment before working her way to the top in four short months. Her resume boasts three-star experiences from Menton’s Mirazue and Paris’ L’Apege. Although her Instagram account is currently set on private, you can always follow her cooking in real life at the restaurant’s H Queen’s location. Reservations can be made here.

Sri Lankan-native Gisela Alesbrook, or warmly, chef Gizzy, has brought a little taste of her hometown flavours to Central’s SoHo with Hotal Colombo, the cosy canteen best known for its authentic menu of bold flavours, many of which are near and dear to Gizzy’s heart: bone marrow varuval with pol roti, beef chilli fry and, of course, the venue’s popular Colombo Crab Club. Truly dedicated to her craft with an unshakable passion for cooking, you’ll find Gizzy’s account filled with posts dedicated to the fresh crustaceans, dishes that remind her of home and a post for a favourite Hong Kong snack: egg waffles.

One half of the Cobo House kitchen duo is Devon Hou, an industry veteran that has been cooking among some notable names — L’Atelier de Joël Robuchon, Café Grey Deluxe at The Upper House, Amber and then Tate Dining Room — for the last 16 years. So, you can trust that she knows a thing or two when it comes to gorgeous ingredients and equally gorgeous food. You’ll find everything Devon praises as delicious, including, of course, photographic mementos of every photogenic Knife and Spoon Series creation served at Cobo House.

Peggy Chan is not just a chef. She is also a seasoned panelist, prolific public speaker and long-time advocate for plant-based eating and sustainability in the F&B industry. In other words, Peggy Chan is very busy. She was the chef-owner of Grassroots Pantry and Nectar on Hollywood Road, and while both concepts has sadly shuttered, she has quickly moved on to launch multiple initiatives dedicated to promoting better, greener practices as well as penning her very first cookbook, Provenance. The same practices are woven though Chan’s well-curated grid of fresh seasonal ingredients picked up from local farms, messages to inspire better habits and a whole lotta tasty food.

Visit Chilli Fagara for its fiery Sichuan cuisine — dumplings soaked in chilli oil; tofu bubbling in a ma la broth — but don’t forget to credit Chan Kai Ying for the recipes. Born into a family of chefs and restauranteurs, it was only natural for Chan to find footing in the F&B industry, which she has through cooking authentic Sichuan recipes at the Central post. The Chong Qing native has since brought the restaurant to prestigious Michelin Guide standards, perfecting passed-down recipes and ideating new ones (including one chilli-spiked ice cream) and while she doesn’t seem to be on Instagram herself, you can follow — and head over for a mouth-numbing experience — Chan’s cooking at the Old Bailey Street address.

Let Roots Eatery’s chef-founder Stephanie Wong attest: if you can dream it, you can do it. The Hong Kong native first found a career in banking before enrolling herself into the reputed Alaine Ducasse Cooking School and establishing a second route through the culinary world. Having meticulously honed her techniques in both France and Hong Kong, Wong eventually answered the longtime dream of opening her own restaurant in 2018: Roots. The Cantonese-French bistro-style bites served at the intimate Wan Chai eatery is of the same kind featured across Wong’s feed. If not stunning new menu additions or revisit to delicious of old favourites, her Instagram is a scrapbook of happy smiles with good friends and the Roots team, along with adorable shots of her new Jack Russel Terrier pup, Siu Wong (小旺).

The adjectives that apply to Jean May’s comfort, feel-good French fare are the same descriptors you’d probably use to describe Tiffany Lo’s Instagram page. Having trained under Pierre Koffmann during her time in London, the Le Cordon Blue alumnus perfects timeless, bistro-style serves at the neighbourhood eatery, the same that are on display on her own feed — dishes perfected and dishes still in mid recipe testing. Scroll through for simple French fare with sprinkling of Cantonese comfort sprinkled in between.

The Chachawan kitchen might be shared between Narisara Somboon and husband Chang Somboon, but Narisara shoulders much of the responsibility at the Issan-style restaurant — including taste-testing and ideating the menu alongside Chang, as well finishing and gate-keeping every dish that passes out the kitchen. Narisara has also come up with dishes of her own, including the rich and creamy massaman gai that was rolled out as a monthly special last October. The Prachin Buri-native share over 40 years of culinary experience with her husband and moved to the city as part of the Chachawan founding team. Follow her penchant for aromatic flavours with a reservation here.

Can’t get enough of Le Petit Saigon’s banh mi? So does its maker, Theign Yie Phan, head chef of both Vietnamese banh mi grab n’ go and sister Saigonese grillhouse Le Garçon Saigon. Through an in-depth interest of traditional Saigonese ingredients and Vietnamese cuisine, Theign has developed new dishes — especially on the woodfire grill — that resembles the bright, vibrant flavours of the region. It’s an interest that has trickled down into Theign’s personal page, where she captures exciting behind the grill action shots and mouth-watering close-ups of new menu additions.

Dining Hong Kong Restaurants Instagram Hong Kong Chefs
Lorria Sahmet
Editor
After two years writing in luxury retail, Lorria now covers food and drink happenings in Hong Kong. When not taste-testing for the best fries in the city (shoestring, always!), find her cosied up at home skimming through Netflix or nurturing baby plants in her indoor greenhouse. She is happiest by the ocean with a giant fishbowl-glass of Aperol Spritz.
Food Drinks Culture Living Hong Kong
Sign up for our newsletters to have the latest stories delivered straight to your inbox every week.