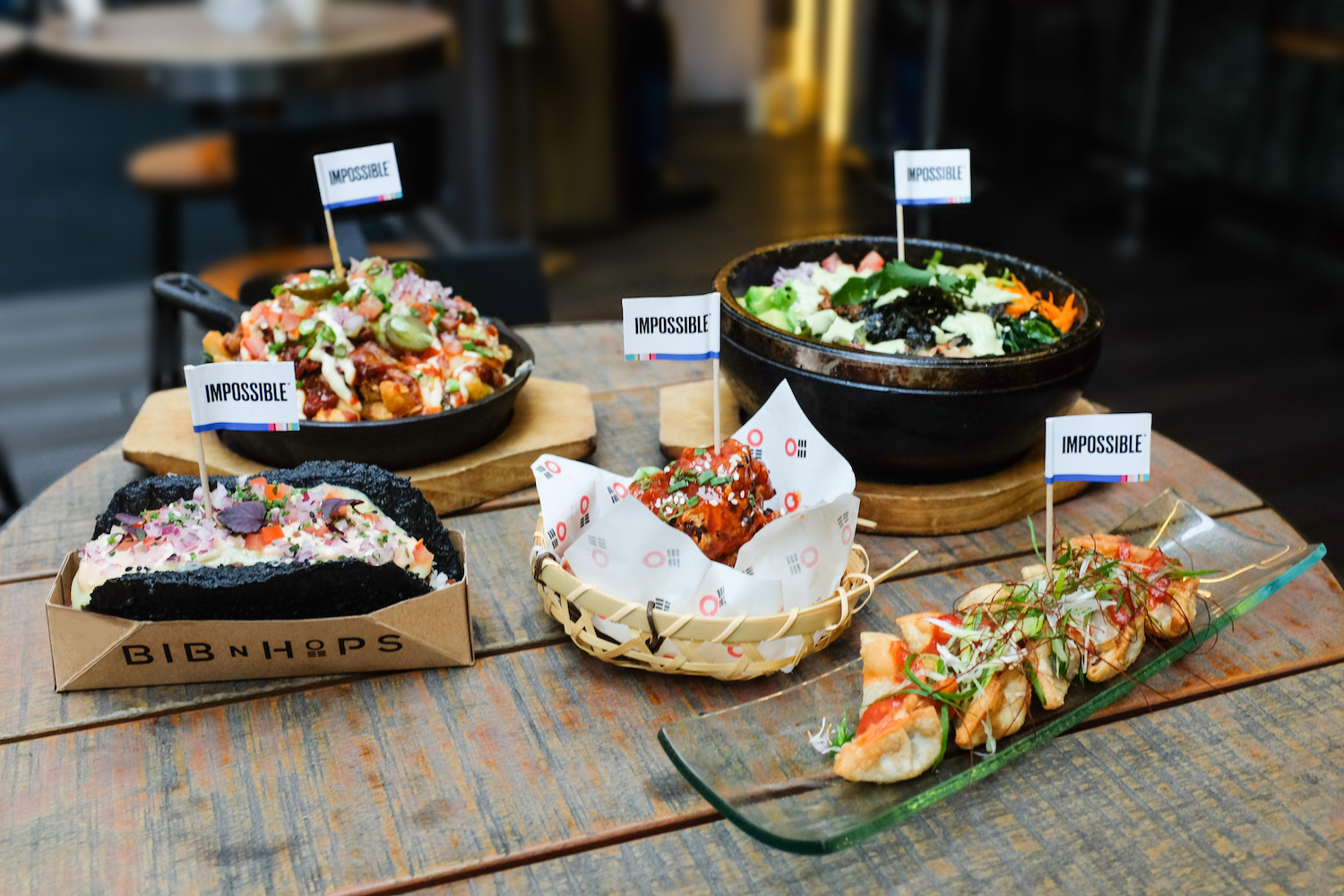 There’s no denying that meat overconsumption has surfaced as one of the biggest topics in food and sustainability in the past decade. Far more than a passing fad, companies such as Impossible Foods and its competitors are making it their mission to become the very future of food: aiming to replace meat with sustainable plant-based proteins or in some cases, even lab-engineered beef made from cultured animal cells.

One of the largest players in the market, Impossible Foods has gone global at record speed (It helps that the product was kick-started by mega-chefs such as David Chang). Perhaps the company with the largest public-facing persona, Impossible has dominated headlines, from ‘bloody’ burger taste tests, to landmark fast-food partnerships, and even juicy updates on the ongoing beef (pun intended) between Impossible and main rival Beyond Meat. With a proven global appetite, there’s no denying that the Silicon Valley startup has tapped into the collective zeitgeist of dining in 2019; and with food consciousness and sustainability initiatives the big-ticket topics of the moment, analysts predict that alt-meat could become a US$85 billion industry in the next decade. Impossible is now on the menus of more than 14,000 restaurants worldwide, and recently landed on supermarket shelves.

The company chose Hong Kong as the site of its international launch pad in 2018 (it’s no surprise, given Hong Kong has one of the highest meat consumption per capita in the world), and the product has since proliferated across restaurant menus in all variations and cuisines. With Impossible 2.0 offering an even more precise imitation of the real deal (a fact that LSA editors can readily attest to), local Impossible dishes are becoming increasingly more creative and delicious. Without further ado, we present 18 of the best Impossible Foods dishes you can track down around the city, whether you’re a food utopian with a hunger for saving the world from impending factory farming-related doom, or simply looking for a delicious and juicy burger — fake meat notwithstanding.

This is So Texas Burger at Morty’s

This southern-inspired burger rams in the flavour with the thick-cut Impossible patty topped with generous layers of caramelised onions and sautéed mushrooms. A blanket of cheddar cheese ramps up the umami — all smothered in Morty’s house-made BBQ sauce between two squishy potato buns. The accompanying basket of sweet potato fries is a must.

Say hello to the bao that kickstarted it all: May Chow’s riff on the Impossible Burger was one of the very first IF dishes to launch in Hong Kong, and remains to this day, one of the best. The ever-inventive chef has meshed her culinary DNA with Impossible’s — coming up with a bao-burger imbued with her signature East-meets-West culinary style with black pepper teriyaki sauce, fermented tofu sauce, and a salted lemon konbu salad stuffed between two house-made steamed buns.

New kid on the block Shady Acres gets in on the action with an Impossible cheeseburger that puts its real beef counterpart to shame, filled with pickles, soft onions, and enough velvety melted cheese to require a surfeit of napkins at the ready. It’s no surprise given the all-star culinary team here, including Boris Yu and Max Wong, formerly of Ab Street Social.

Part of Impossible Foods’ USP is that its meat can be used in a variety of applications: from taco meat to burgers and Bolognese sauce. Elephant Grounds proves that the product is just as delicious in minced form, with their colourful taco rice ball finished off with salsa, a slow-cooked egg, plenty of cilantro, lime and crisp taro chips for scooping.

It would seem remiss to have Impossible Foods launch in Hong Kong without some version of an Impossible dumpling. Luckily, Chilli Fagara has jumped on the opportunity with these spice-packed parcels filled with a well-seasoned faux-meat filling.

From dumpling wrappers to roti — Impossible’s versatile minced meat is just as delicious as a stuffing between fragrant triangles of pock-marked roti, loaded with spices and served atop a bed of herb-flecked rice pilaf. The cool and refreshing honey cumin yogurt ties the hearty dish together. Other options at Frites include an Impossible Bolognese and Impossible burger.

Uwe Opocensky may have hung up his burger griddle (the celebrated chef is now back to working in-house at hotels at the Island Shangri-La), but his IF creations live on at Beef & Liberty locations around Hong Kong. The decked-out “Liberty” fries are served here with Impossible shredded meat, cheddar cheese, spring onions and sour cream. We dare you to try and eat just one.

Fried batter? Check. Spicy chilli glaze? Check. Guilt-free filling? Check. Bib ‘n’ Hops ingenious Korean Fried Impossible Meatballs tick all the boxes for a satisfying bar snack, paired with pickled radish and an ice old beer to wash it down. A bonus? The dish clocks in at under HK$100.

Impossible minced meat fares particularly well in ragu-style dishes, with the engineered flavour of beef enhanced by the hearty stew of onions, fresh tomatoes and concentrated tomato paste. The hearty Bolognese at Ruby Tuesday is topped off with a shower of parmesan cheese for a vegetarian-friendly all-in-one meal.

While Impossible hasn’t had as much success penetrating the traditional Chinese kitchens in Hong Kong (according to a local spokesperson, that’s the next big push for the company), kitchens like Ga are paving the way for Eastern-style Impossible Foods dishes. Savoury Taiwanese-style Impossible minced meat adopts the same flavour profile as the original recipe, coated with five-spice and dark soy.

Have you tried all of the best Wagyu sandos in Hong Kong? If you’re craving a break from the fat-marbled beef, why not try the meat-free version at Basao, which serves this Impossible sando as part of a small snack menu at its Wan Chai branch, paired with the brand’s premium teas. Their riff on the sando features Impossible patties smeared with tonkatsu sauce, topped with crunchy cabbage, and sandwiched between fluffy slices of Japanese milk bread. You can bet it tastes as good as it looks.

If anyone could create the consummate Impossible Burger, it’d be one of Hong Kong’s OG gourmet burger shops, The Butchers Club. The burger chain serves versions of both Beyond and Impossible burgers, but we’re digging the latter version complete with pickled beetroot crisps, vegan cheddar and an addictive vegan sauce. Available across all outlets.

Price: HK$108
My Meat Run Laboratory broke ground this summer as one of the first restaurants to partner with Impossible Foods on incorporating the product into classic Hong Kong-style dishes. Six of the vegetarian restaurant’s signature dishes are made with the substitute, including this Impossible minced meat with pickled veggies on rice — a warming clay-pot dish that’s arrived just in time for cold-weather season.
My Meat Run Laboratory, Shop 302, D2 Place One, 9 Cheung Yee Street, Lai Chi Kok, Hong Kong, +852 3619 7581

While we love cheese, we’re guessing only the most dedicated dairy fans will be able to get behind this Impossible Camembert Burger, which commits the unholy culinary act of replacing burger buns with wheels of camembert. This patty gets points for sheer audacity and creativity. Try it if you dare.

Cali-Mex’s version of Impossible Nachos comes loaded with all the fixings: sour cream, fresh tomatoes, a dollop of guac and cheese-blanketed tortilla chips all arriving in a piping hot skillet. The substitute of Impossible beef makes these nachos (ever so slightly) less gluttonous. Grab a margarita and tuck in.

Don’t let the size fool you — Porterhouse’s epic Impossible Wellington (weighing in at 1kg) retains a juicy and well-seasoned filling, encased in its cocoon of savoury mushroom duxelles and a golden-brown flaky pastry crust. The decadent meal for two is capped off with a beetroot molasses, mashed potatoes and fragrant truffle. This is the ultimate dish for vegetarians who still crave the experience and ambience of the traditional steakhouse experience.

What does an Impossible dish look like at a Michelin-starred kitchen? You can find out at Qi House of Sichuan: They’ve taken ma po tofu vegetarian, the classic Sichuan dish powered by tingly, mouth-numbing peppercorns and rounded out with umami-laden fermented doubanjiang sauce. Round out the plant-based meal with Qi’s Impossible tofu rolls, Impossible dan dan noodles, and Impossible string beans with minced meat.

Leaning toward the healthy end of the spectrum on this list, Tung Po’s lettuce wraps come free of excessive fat and carbs. Studded with shallots, garlic and chillies, the flavour-packed minced meat riffs on Thai larb, with battling sensations of sweet and sour, capped off with crunchy fresh lettuce cups.

Restaurants Hong Kong Restaurants Hong Kong Dining Impossible Foods impossible meat impossible patty
Leslie Yeh
Editor in Chief
Having worked as a lifestyle editor for almost 10 years, Leslie is thrilled to be writing about the topic she loves most: wining and dining. When she's not out pounding the pavement for the latest new restaurant opening or tracking food trends, Leslie can be found at home whipping up a plate of rigatoni vodka and binge-watching Netflix with a glass of Sauvignon Blanc in hand.
Dining Restaurants Food Trends Drinks Travel