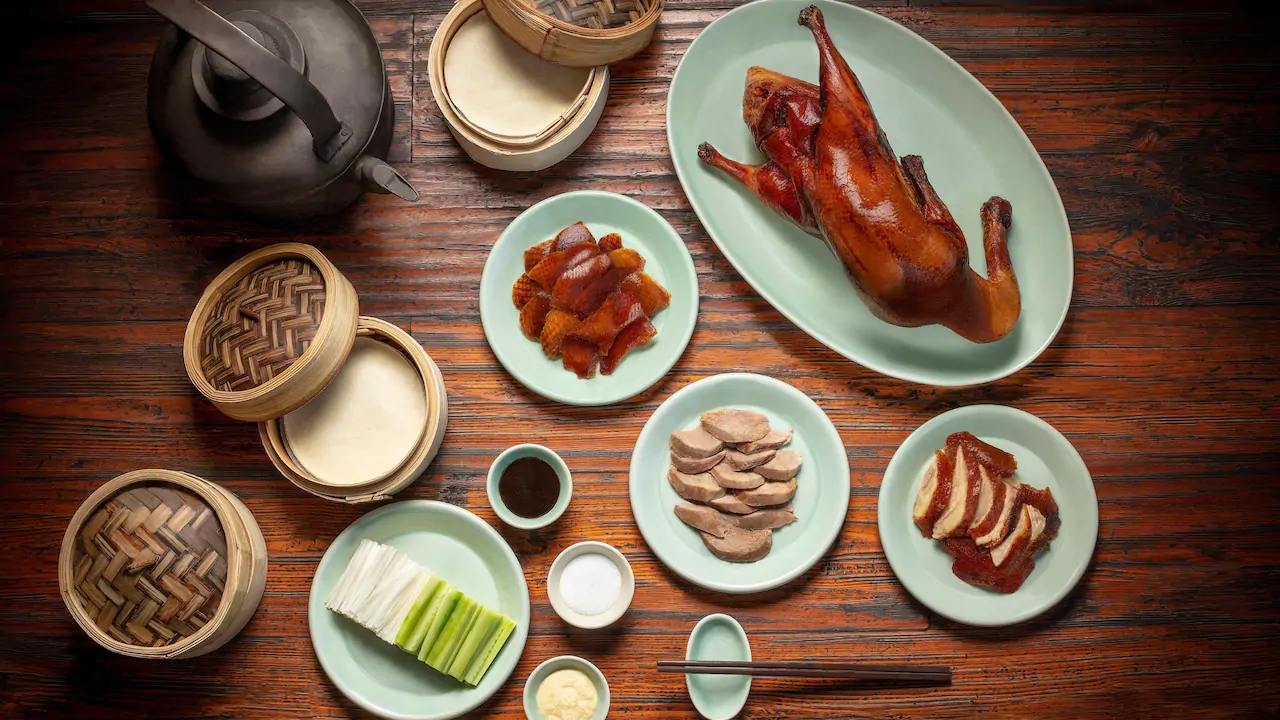 Food & Drink
Ducking Good: Where to find the best Peking Duck in Hong Kong
Share this article
Next article

The centrepiece of every family reunion dinner. And just in time for Mid-Autumn gatherings.

Peking duck, a dish passed down from the royal kitchens in Beijing, has garnered reputation as a city-wide must-have. Especially during family reunions and gatherings, where the experience –– the conversations; the courteous niceties –– is just as meaningful as the meal itself. For the Peking duck, which lends much of its grandeur to the table-side drama which accompanies, it’s the exact kind of meal-time interactiveness so appreciated.

How do you do your duck? Do you bundle everything up in a tight roll? Or do you do it as the experts do, with a three-step fold-and-tuck that ensures perfection in a single bite? It’s this, and of course, the deliciously fragrant, glistening duck and its balanced entourage of sides that makes this it an all-time favourite. Don’t forget to order one day ahead!

Soaked in a special house-made marinate, the Beijing-sourced, 42-day old duck is rotated through the restaurant’s dedicated lot of machinery: a custom air-drying fridge that dehydrates the duck for two days and then, an applewood brick oven that fires up that distinct crispy exterior and a faint smokiness that hits your nose even before you can assemble the perfect bite. Carved table-side in a technique Mott 32 has named the “Royal Cut” for maximal flavour and fragrance, each slice is then rolled within the thinnest of thin pancakes with cucumbers, scallion and a sprinkle of raw cane sugar or a dollop of Hoisin swirled with pungent ribbons of fresh garlic sauce.

When patronising a spot like Duddell’s –– decorated in stylish furnishings hand-picked by London-based interior designer Isle Crawford and also host to a sophisticated art programme –– it should come as no surprise that the Michelin-starred menu is also one show-stopping performance keen to impress. The Peking Duck, most notably, is one such serve –– dramatically carved table-side in swift, expert slices.

Air-dried for 12 hours ahead of slow-roasting in a traditional Chinese barbecue oven for almost an hour, the Beijing-sourced duck emerges glistening; a beautiful copper-red that’s indicative of its crispy, airy exterior. It’s served with the classic condiments –– cucumber, scallions and chilli –– and is where the true performance lies: swift motions of duck, sides and a swirl of the “secret duck sauce”, artistically assembled and wrapped in a three-fold, single mouthful.

Once you spot the giant wire-framed duck in mid-waddle, you have arrived to Forbidden Duck. Helmed by chef Alvin Leung, a self-proclaimed “Demon Chef’ that specialises in ‘X-treme Cuisine’ and owner of three-Michelin starred Bo Innovation, you can expect the Peking Duck at the dedicated restaurant to be one of surprises.

Sifting through the usual steps of dry-ageing and slow-roasting (for over three hours) in a dedicated arenas, Forbidden Duck’s secret to the crispy, caramelised exterior is a quick finishing blast in high-heat for around 20 minutes before serving, so that when it arrives at the table, sliced in 26 thin pieces in perfect 2:1 meat to skin ratio, the duck is still warm, succulent, with the satisfying crisp first bite. Forbidden Duck does their wraps a little differently though, and infuses it with light citrus flavour that’s further brought out by an orange-tinged Hoisin sauce along with the accompanying slices of honeydew and watermelon radish.

Xin Rong Ji may be more famously known for its exquisite, Michelin-grade serve of Taizhou cuisine, but longtime loyalists will know to always get in an order of the Peking Duck before visiting. It’s sourced, prepared and roasted by the restaurant’s Beijing-born chef, following a precise recipe that’s been tried and tested against time-honoured tradition. The duck is brought straight from the oven and out to the table-side carving station –– skin still sizzling; crackling –– then sliced into the golden standard of 108 soft and succulent pieces that sits in a beautiful opposition to the crispy, translucent exterior. Wrap it all up while it’s still hot with all the accompanying sides, including the Hawthorne jelly strips which the restaurant adds amongst the classic spring onion and cucumber slices.

The Peking Duck at Shatin 18 is a thoughtfully executed science that goes beyond the typical routine of roasting, slicing then devouring. The duck is coated in marinade, hung to dry and roasted for just over an hour –– a slow-and-steady flame that crisps up the exterior whilst locking flavours within. Finally, it appears table-side for a captivating performance of the chef’s deft knife skills. This is where Shatin 18 duck differs. Rather than slicing out balanced skin-to-meat slices, the chef partitions the bird into three different parts: the crispy skin, the breast and the leg. Each section comes with its own way of enjoying: a tap of white sugar granules for the first, then the practiced pancake-and-condiments fold for the following, and the same but with an extra touch of garlic paste for the last. Or you could just stack it all up –– skin, breast, leg –– for a single giant mouthful –– more cuts means more duck to go around.

Get your cameras at the ready; flashlights turned on. Hutong’s take on the Peking Duck promises rounds of applause and crowds of ‘Oohs and Aahs’ right on cue. Serving a Flaming Peking Duck, the bird is infused with a special blend of Sichuan green chillis, star anise, black pepper and marinated with slathering of Hutong’s homemade chilli paste that gives the skin a peppery crisp and crunch. Then, let to air-dry for over 36 hours. After 40 minutes of slow-roasting in a special oven, the duck is rolled out into the dining area where the drama begins. Following a quick pour of Chinese rose wine and rum, the duck is set ablaze, table-side, lighting up in smokey, aromatic flames. Before you can even take your eyes away from replaying rolls of the previous show, chef’s expert cuts of the duck are swiftly over. Then, you know the drill: wrap it up once, twice and the final third time, and tuck in for a satisfying bite.

One for the traditionalists, Spring Moon at The Peninsula has endured as a prestigious favourite since opening in 1986. Naturally, the Peking Duck here is of high-standards. First, of the bird itself; an approximate 2kg duck, sourced from a special Beijing breed known for the balanced ratio of fat and meat. Then, of the meticulous preparation that includes dry-ageing and slow-roasting. Spring Moon adds an extra final step once orders roll in, drenching the duck in ladles of hot oil for 15 minutes to crisp up a perfectly taut, airy exterior. Finally, the table-side performance. The careful sectioning of a just-roasted duck into 20 wafer-thin pieces; 10 of which chef names as “Golden Coin” slices, which are given to any cuts that come with both skin and meat. And you’re already familiar: home-made pancakes as the base and a couple pieces of the julienned condiments and a spoonful of the restaurant’s “homemade Peking sauce”.