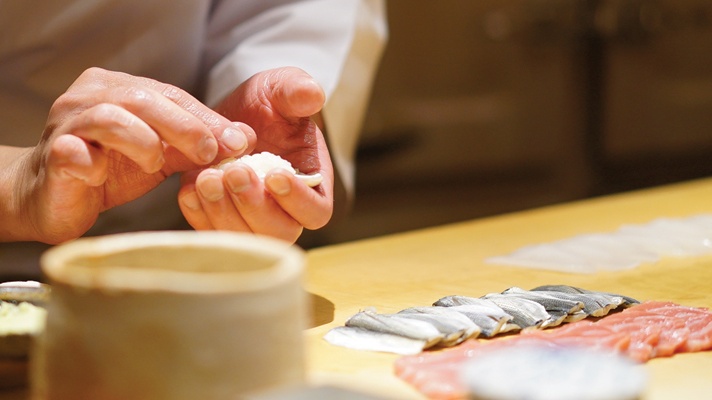 Sushi as we know it has come a long way since its origins in Edo-era Tokyo as a quick, unfussy streetside snack.

From dependable conveyor belt sushi or kaiten-zushi to the elevated gastronomic journey of omakase, the art of sushi has spread from shore to shore. But the quintessence of sushi hasn’t changed too much since fabled master Yohei Hanaya slung hand-pressed nigiri by the Sumida river– it’s still all about creating that singular bite of bliss, the result of an exacting combination of skill, seasonal ingredients, and infinite imagination.

Located on the 7th floor of the Landmark Mandarin Oriental, Sushi Shikon is the first branch of Sushi Yoshitake in Tokyo’s Ginza district. A three Michelin-starred monument to Edomae-style sushi in Hong Kong led by executive chef Yoshiharu Kakinuma — who trained as an apprentice under Chef Yoshitake – Sushi Shikon delights diners with a sumptuous omakase experience (HK$3,500 per person). While seafood is flown in from Tokyo’s Toyosu fish market twice a day, the key to Edo-style sushi, developed before modern refrigeration, lies in the art of fermentation. The flavours of the fish are coaxed out through techniques such as ageing, curing, and smoking, which impart depth and umami. At Sushi Shikon, dishes like tender octopus and steamed abalone topped with abalone liver sauce – served in the elegant, cypress wood-filled environs – exemplify the style.

A deep awareness of the changing seasons – or kisetsukan in Japanese – is a defining tenet of the art of sushi. At Godenya, chef Goshima Shinya leads diners through an exploration of seasonality through seafood and sake. The omakase-only pairing menu (HK$1,750 per person) changes on an almost monthly basis, offering diners a taste of high quality ingredients at their peak. The preparation of the fish is deceptively simple, showcasing Goshi-san’s meticulous skill and subtle interpretation of haute cuisine. With each sake served at a particular temperature in an artisanal vessel, it’s easy to see why guests who dined at the former location in Tokyo fly to Hong Kong just to visit Godenya. To make a reservation, diners need a booking code which can be found on the Facebook page of the restaurant.

Two Michelin-starred Sushi Saito, located on the 45th floor of the Four Seasons Hong Kong, is one of the most exclusive sushiya in town. The restaurants, with a framed view of Victoria Harbour, seats just 16 guests, and its reservation hotline only operates on the first day of every month from 10am to 2pm. The Edomae-style nigiri here is masterfully crafted with a meal progression that bucks expectation: instead of following the usual sequence where heavier plates follow lighter ones, often raw dishes, guests embark on an eclectic adventure masterminded by reputed chef Saito.

Not quite the classic sushi bar offering, diners would be remiss not to relish the white truffle rice signature starter at UMI, Hollywood Road’s intimate ten-seater sushiya. But at a restaurant named after the Japanese word for the sea, it’s no surprise that the spotlight here is solely on the fish. The omakase menu (HK$1,888 per person + HK$700 with the sake pairing) highlights premium seafood, including tuna, yellowtail, filefish, and sea perch brought fresh from Toyosu each day. Chef Yukio Kimijima, a fourth-generation chef who previously worked at restaurants Zuma and Ta-ke (formerly Sushi Take), creates a relaxed and friendly atmosphere from behind the counter.

The northernmost prefecture of Japan, Hokkaido, is well-known for its high quality produce; at Sushi Sase, it’s home to both the chef and ingredients. Spearheaded by executive chef Sase Satoshi, Sushi Sase focuses on top-end ingredients simply prepared. The garnishes here truly shine: from bright citrus zest to fine shaved rock salt, each piece of fish is enlivened with carefully selected seasonings. In a classic omakase setting, it’s customary for the chef to adjust the flavours as they go along, letting the meal unfold spontaneously based on the response of the guest. So, when dining at Sushi Sase, be prepared for chef Sase to carefully assess your expressions as you savour each bite.

Harbour City’s Sushi Tokami is the Hong Kong branch of Tokyo-based Sushi Tokami, which was established in Ginza in 2013 and earned one Michelin star soon after its opening. At both branches of this boutique sushiya, tuna takes centre-stage. In fact, the owner is the founder of Tsukiji market’s Yamasachi, a tuna specialty store known for supplying some of the best wild-caught tuna to eateries across Tokyo. Accordingly, the omakase menu has a distinct emphasis on tuna. Dishes include the rare maguro tossaki, which is crafted using the tender, richly flavoured meat from near the head of the esteemed fish, while tuna bone collagen soup, replacing dessert, feels restorative and soothing. All the nigiri are made with rice flavoured with red vinegar or akazu, which lends a complementary tartness to the shari (sushi rice), tying it all back to the enigmatic roots of the word ‘sushi’ — sour-tasting.

Sushi Zo is unique in that it was one of the first omakase-only sushi bars to open in Los Angeles. Founded by Osaka-native chef Keizo Seiki in 2006, Sushi Zo has made a name for itself in the culinary capitals of the world in the years since. At the Hong Kong outlet, located in the tranquil Tai Kwun compound, chef Fumio Azami guides guests through a laid-back yet lively gustatory tour where the nigiri-zushi dazzles. Through the 18-course menu (HK$2,500 per person), plates like the trio of uni, akamatsu or sea perch, and thick-cut scallop unveil the tenuous magic that takes place when the chef’s knife – deft and precise – meets the freshest bounties of the sea. Indulge in one of 18 Japanese-inspired cocktails next door at Gishiki Lounge.

Tucked away inside the Otto Hotel is the very first international branch of Osaka’s famed two Michelin-starred sushiya, Sushiyoshi, led by chef-owner Hiroki Nakanoue. Chef Nakanoue is a rebel of sorts in the world of sushi, well-known for infusing unconventional techniques and ingredients – the likes of parmesan cheese – that push the boundaries of sushi and puts a creative spin on the otherwise highly ritualised format of the omakase dinner. At Sushiyoshi, the flavours, plating, and presentation unfold as playful choreography with artfully constructed dishes like the waffle with scallop tartare and caviar d’Aquitaine uni rice served inside a kabocha-reminiscent sea urchin shell.

The best beach bars and restaurants in Hong Kong