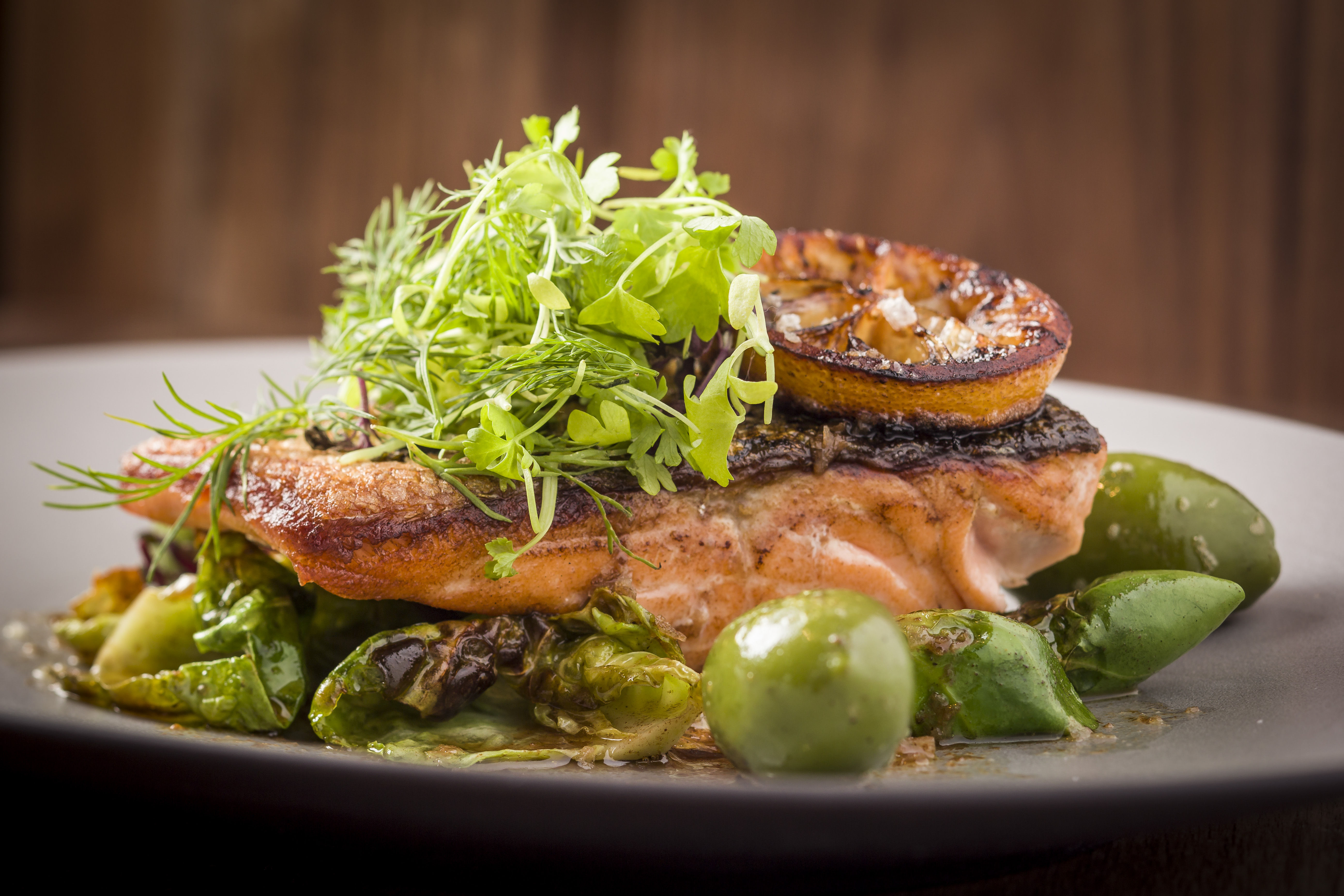 “In with the new, out with the old” seems to be the motto of Pacific Place dining recently, as landlords Swire Properties have instituted major changes in the mall’s F&B offerings, shuttering the doors to old favourites such as Dan Ryan’s and Grappa’s and bringing in a host of more trendy, high-end restos — Italian joint Operetta, Bangkok import Apinara, JIA Group’s Californian joint Commissary, and the latest from Dining Concepts, an American brasserie with a very un-American name, Bizou (based off “bisou” or the French word for “kiss”).

The second Dining Concepts restaurant to open this month after Italian restaurant Spiga in Central, Bizou presents the concept of a “great American brasserie”, taking inspiration from America’s melting pot of cuisines to create a surprisingly refined menu (you’ll have to look elsewhere for your fix of junky American diner food).

The space has been designed by Shanghai-based architects Neri & Hu, with a natural colour palette dominating from warm wood finishings to bronze accents and grey brick-layered walls. The all-day dining spot encompasses an adjoining bar (serving up a curated selection from master mixologist J.Boroski) and a soon-to-be-launched outside patio area spilling out into the mall.

Two days in, the brasserie was already packed with Pacific Place’s office crowds at lunchtime, while the man behind the menu — renowned, world-travelled chef Magnus Hansson — was busy in the kitchen baking fresh bread (one of his areas of expertise) and putting on the finishing garnishes at the pass (the restaurant makes everything in-house, from the bread to the ice-cream).

Chef Magnus’ unwavering loyalty to healthy, organic and seasonal ingredients makes itself known throughout the menu, with dishes reflecting a certain vibrancy and freshness that can only come from using ingredients at the peak of their season. From the twice-cooked, air-dried potatoes to the whole-roasted chicken that’s salt-brined overnight and marinated in a flavourful mix of balsamic, whole lemons, rosemary, sage and honey, there’s a thoughtfulness and attention to detail in the bold, clear flavours and wide-ranging seasonings which made for a very pleasant meal, refuting the sometimes sub-par reputations of mall restaurants.

The set lunch is a deal at HK$138 or HK$188 for three courses (depending on your main), with tea or coffee included. We started off with the pan-roasted beets with avocado, drizzled in extra virgin olive oil, and scattered with toasted hazelnuts for crunch. The arrangement came together with a lemon zest-scented Greek-yogurt sauce, taking influence from the Mediterranean coast.

The grilled octopus (HK$158) was another simple and healthy dish which extracted maximum flavour from the ingredients, thanks to the dark, crispy char on the tendrils of the still-tender octopus, and an addictive Lebanese-inspired mint hummus which danced with Middle-Eastern spices and plenty of acidic tang from lemons. With these two outstanding components on the dish, it was no small feat that the potatoes — normally the after-thought — managed to steal the spotlight. These crispy poppers are twice-cooked and air-dried overnight to pull out the moisture and give an extra crispiness to the skin. We wished we had a whole bowl to snack on on the side.

From the mains, the roasted Norwegian salmon was beautifully plated, again drawing influence from the Mediterranean with plump Italian Ceringnola olives, a bed of half-caramelised Brussels sprouts leaves, and a sizable portion of salmon with a charred lemon wedge seeping flavour into the fish. It’s a choice lunchtime option for those who don’t want to return to their desks feeling weighed down, although we wished the fish had been pulled out a few minutes earlier from the oven.

The short ribs in red wine was another winning dish — an earthy, hearty plate with the fork-tender meat falling apart at each bite. Fresh horseradish brought relief to the rich and heavy meat, while a creamy potato mash and roasted gai lan rounded out the carb and veggie components. Worth noting, gai lan is one of just two ingredients used locally by the chef (the other is shrimp for the sweet prawns with smoked paprika), whose rigid standards for the quality, hygiene and authenticity of his ingredients sees him importing most of the produce from Italy, Germany, Holland, and his hometown of Sweden.

A stickler for nutrition and diet, chef Magnus is apt to push the salad selection at Bizou, and for good reason. There’s a chicory greens salad with soft-boiled egg, raw honey, Parmesan and roquefort cheese, barley and crispy lardons; a shaved Brussels sprouts and white cabbage salad with fresh oregano; and the chef’s favourite — a mint jalapeno kale caesar with toasted bread crumbs, Pecorino and green chilli. As for desserts, chef Magnus takes inspiration from around Europe in a Scandinavian almond apple cake with cardamom ice cream, coconut chocolate bread pudding, and an Italian butterscotch budino with salted caramel and sesame cookies.

Open 11am-11pm daily, Bizou’s healthy menu items, affordable prices and curated cocktail selection make it an accessible and worthy destination in the busy hive of new Pacific Place openings. From Scandinavian gravlax on the menu to the range of Middle Eastern-inspired dips and sauces, Bizou smartly depicts the melting pot of America’s dining scene, ensuring bold, fresh flavours to discover each time around.

Hong Kong Pacific Place Dining Concepts Hong Kong Restaurant bizou chef magnus hansson american brasserie american cuisine american food brasserie bistro food where to eat in hong kong
Leslie Yeh
Editor in Chief
Having worked as a lifestyle editor for almost 10 years, Leslie is thrilled to be writing about the topic she loves most: wining and dining. When she's not out pounding the pavement for the latest new restaurant opening or tracking food trends, Leslie can be found at home whipping up a plate of rigatoni vodka and binge-watching Netflix with a glass of Sauvignon Blanc in hand.
Dining Restaurants Food Trends Drinks Travel
Sign up for our newsletters to have the latest stories delivered straight to your inbox every week.