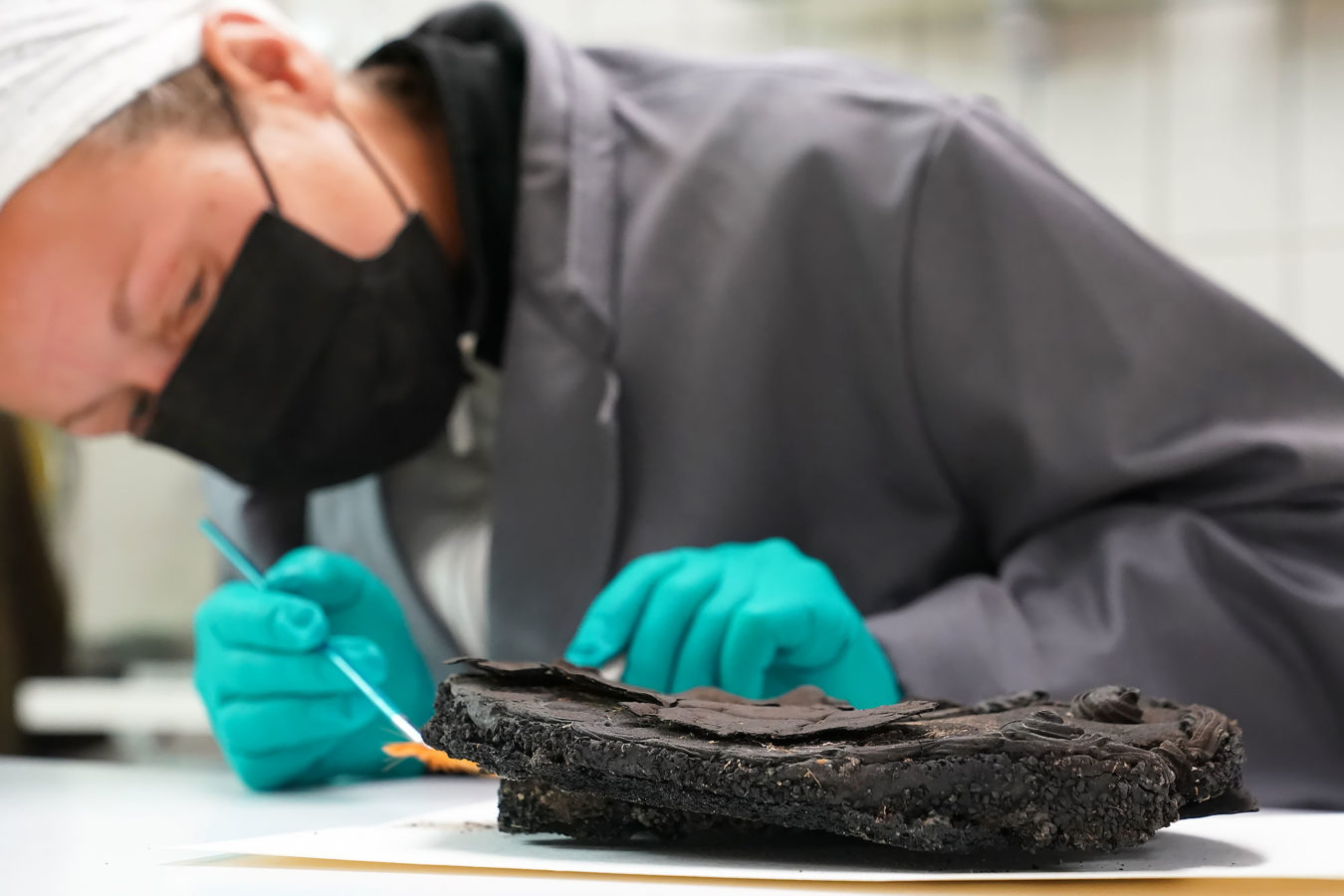 On the night of March 28, 1942, more than 230 British Royal Air Force (RAF) aircraft dropped over 400 tons of bombs on Lübeck, Germany, in an intense raid that lasted less than two hours. When the dust settled the next morning, more than 30 percent of the city had been destroyed, and more than 10,000 buildings were either totally or partially damaged.

Almost everything that lined the Alfstrasse, one of the city’s oldest streets, was levelled during the raid. But earlier this year, when the house that once stood at Alfstrasse 18 was being excavated, archaeologists found a well-preserved (if super-dehydrated) hazelnut and almond-filled cake. According to a press release from the city of Lübeck, experts believe that when the house was hit by an RAF bomb, the ground floor collapsed into the basement, which is where the kitchen was located. As a result, the wax paper-wrapped cake was completely covered by falling debris which kept it in a recognisable condition for almost 80 years.

“It is heavily charred and blackened with soot on the outside, but has been shrunk to only a third of its original height due to the heat,” Lisa Renn, the local excavation manager, said.

According to city records, a merchant named Johann Wärme lived at Alfstrasse 18 at the time of the bombing, and it’s possible that he or someone in his family had prepared the cake for Palm Sunday, which was the next day. Whoever baked the cake had also pulled out the “good crockery” to serve it on, and the excavation also unearthed several records for the resident’s gramophone, including a Beethoven’s Moonlight Sonata.

“The cake may have been intended for a confirmation ceremony. It used to take place on Palm Sunday,” Manfred Schneider, the head of Lübeck’s archaeology department, told Web.DE. “We hope that we can clarify this with the help of the city archives at some point.”

The cake was carefully extracted from the former home, and was taken to a restoration lab for cleaning. LiveScience reports that samples were collected to determine what its nut filling was made from, and it will have to be tested for any lingering chemicals from the explosions before it can be preserved for display.

“This cake is like a window into 80 years ago,” Dirk Rieger, head of the Department of Archaeology for the Hanseatic City of Lübeck Historic Monuments Protection Authority, told the outlet. “[When museum visitors see it] they will hopefully see not only the destruction of the war but also the joy that people had. Because this was a family celebration, they listened to music, they wanted to have a nice cup of tea, they wanted to have this cake. It’s a very intimate situation that was immediately destroyed by this war.”

The “mummy cake” is a rare find. In 2019, several buckets filled with Roman-era oyster shells were found in Hamburg, and last year, a nearly intact wine cellar was discovered in Dresden, underneath what was once a men’s club. “The house and inventory were almost completely destroyed in the bombing in February 1945, but the wine bottles were preserved,” a spokesperson from the Saxon State Office for Archaeology said. “However, food did not survive the heat of the fires.”