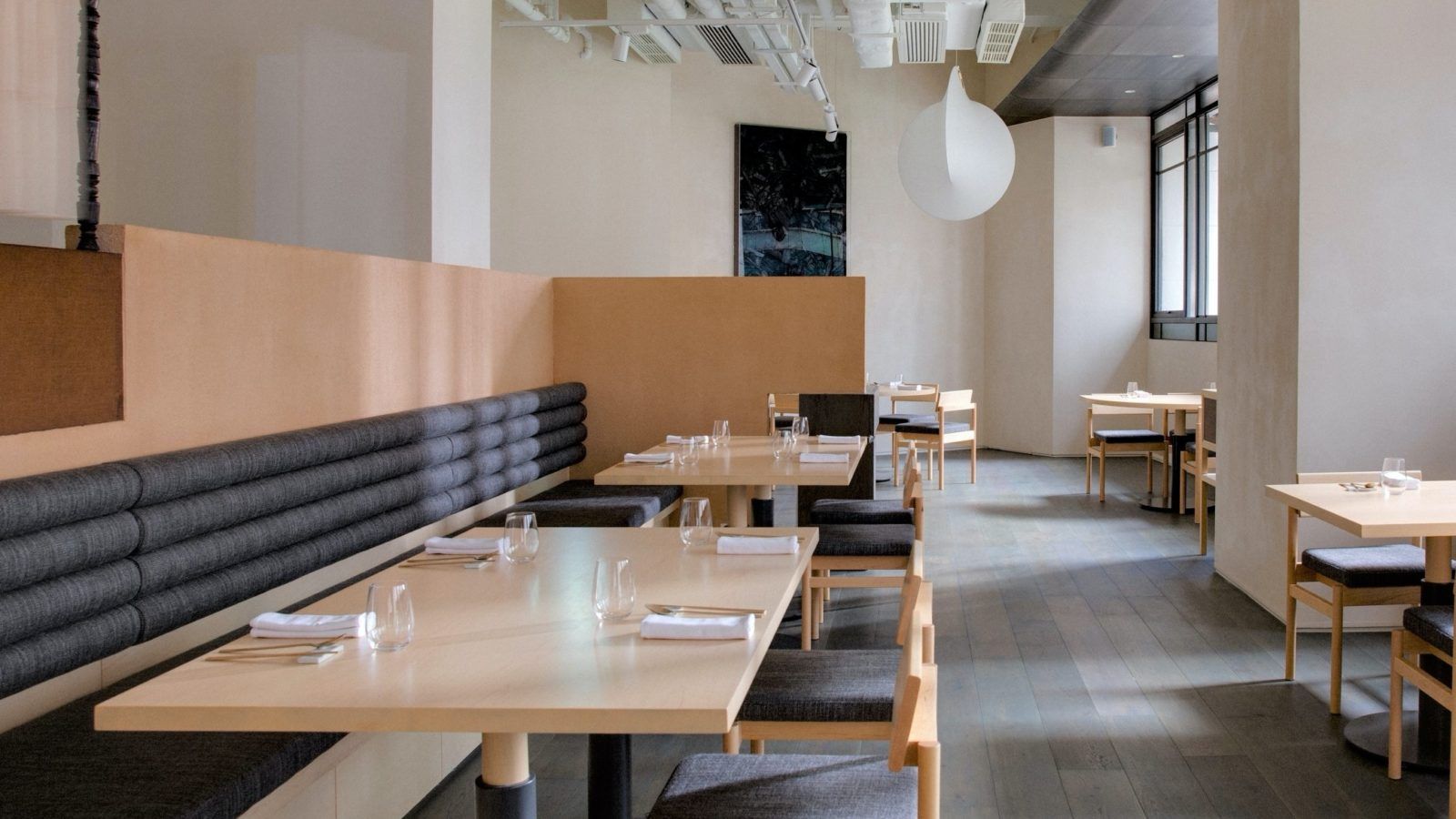 Being chef-patron Mingoo Kang‘s — of Seoul’s two Michelin star Mingles — first international outpost, Hansik Goo is a cherished concept Kang holds extremely dear to heart. Fortunately, having won its first Michelin Star early this year, the modern Korean restaurant from ZS Hospitality Group has proven to fare very well in the capable hands of chef Steve Lee, who assumes the role as head chef while Kang shuttles between back-and-forth between the two.

For Hansik Goo, the Michelin star accolade is not just an award that marks a coveted milestone, but more importantly, sets a new standard for Korean restaurants across the city as the first Korean restaurant in Hong Kong to receive the lofty recognition. In any case, it’s validation that Korean fine-dining, a rare genre in the current dining landscape, has found its rightful place to stay.

South Korean-born Lee, like many others, recalls his first memorable encounter with food being a home-cooked meal around the dinner table. In particular, Lee names his mother as inspiration, who was the first to nurture his love for cooking and appreciation for ingredients, and reminisces on his grandmother’s Biji-jjigae (tofu stew) which always offered a reassuring comfort.

“I dreamed about becoming a chef since I was a child watching my mother’s home cooking,” Lee shares. “I used to help her when she prepares dinner for our family and sometimes when she is not home I enjoyed making simple dishes for my sister on behalf of her.”

“I believe it was the period I slowly opened my eyes on how joyous it is to cook for someone else,” he continues.

From preparing simple meals for his sister emulated after his mother’s endlessly rehearsed moves, Lee graduated from Kyong-gi University — coincidentally also the alma mater of Mingoo Kang — where he studied culinary theories and technicalities. Then, he began his debut as a junior chef starting in Australia, where a multi-year career at the Bentley Restaurant Group honed an extensive set of practical skills which range from rustic casual cooking to elegant fine-dining.

At Hansik Goo, Lee, who joined the team in 2020, is exceptionally familiar with Kang’s vision in reinterpreting a new facet of Korean cuisine — it’s one that Lee is eager to share, too. Leaning into the detailed finesse of fine-dining with a smidge of international influence, the menu confidently represents regional Korean ingredients and recipes without losing character of the original. “We work on how to deliver a new dish in the most comfortable way for local diners while keeping authenticity in flavours,” Lee says.

Some restaurants solely focus on the seasonality of ingredients; others, core dishes that make up the expected blueprint of a cuisine. Lee at Hansik Goo does both; a conscious dance between spotlighting specific ingredients and maintaining a cultural element of the cuisine — “Our culinary philosophy is introducing an integrated context of Korean culture beyond the food,” explains Lee.

After all, it’s a never-ending journey for Hong Kong’s restaurants to stay relevant in an ever-changing, competitive scene. But it has not deterred Lee so far, who is continuously devising new avenues — a brand new summer menu, in fact, as you read this — to showcase the colourful world of Korean cuisine.

I went out for hot pot night with friends to Pak Lee Hot Pot and Seafood Restaurant in Prince Edward.

It is about presenting happiness and connecting the people in the most simple but honest way.

When I was working as a junior chef in Australia, one of my senior chefs advised me that we should stay professional regardless of being “on” or “off” duty. I didn’t know what it meant exactly and how to put it into action back then, but I found it touched me deeply after I reached the senior position.

Who inspires you/ your cooking?

My mum is the source of my inspiration, especially when I’m doing Korean cuisine at Hansik Goo. I recall the tastes of her food that I grew up with and those are the most fundamental guidelines for my cooking. Also, the warmth and love I feel whenever I think of her food encourages me to overcome all struggles, whatever I face in the kitchen.

I was a lucky enought to meet chef Mingoo Kang as an alumnus from my college where I studied culinary arts and became his mentee. His detailed approach in creation based on in-depth knowledge of Korean cuisine inspires me in various ways, especially in the past two years after I became head chef of Hansik Goo (also thanks to the opportunity given by chef Mingoo), I could work with him more closely and learned a lot, not just about the techniques and ideas for creating dishes, but the right attitude as a chef.

I would pick Sundubu Jjigae, Hansik Goo’s version of Korean spicy dubu (tofu in Korean) stew with iconic local seasonal ingredients such as cod’s milt, prawn and hairy crab, as one of our signature dishes which was served during the winter season of 2021. Also, Korean Fried Chicken and Samgye Risotto have been popular among local diners and served in our menu since the first day while the items were kept refreshed periodically with seasonal ingredients.

I cannot say it is a stress-free kitchen as I am very strict on delivering quality dishes to the guests, but at the same time, I try to keep the vibe energetic and create a fun rhythm among the team.

I get excited when I start to feel the air is getting cold because it means the season of hairy crab is coming back. On my second winter in Hong Kong, I presented “Sundubu Jjigae” mentioned above, combining my soul-food and favourite local ingredient at Hansik Goo.

I don’t cook a feast at home, but I enjoy playing around with Korean instant ramen when I prepare a quick snack. From the classic vegetables such as onions or leeks to local ingredients like prawn roe, roasted flounder powder or Sichuan chilli oil, I engage with a diverse range of ingredients to create different variations of this simple spicy noodle.

The egg rice bowl with ganjang (soy sauce). It wouldn’t take even 30 minutes to make this bowl of rice covered by a slice of sunny side up egg and finished with a drop of sesame oil and a spoon of ganjang. However, it has a special memory related to my childhood as a food that my mum used to prepare for me when I impatiently asked her for something after school. Served along with gim (dried seaweed) or kimchi, it became quite a fulfilling meal to get the hungry kid to calm down.

Late night snack and drink with friends. I enjoy going to the dai pai dong in Wan Chai near my house for all kinds of oily, fatty, or heavily seasoned foods that go well with beer.

Every meal I had at The Chairman restaurant. Every time I visit, I’m impressed by noticing how much effort has gone into to creating the dish from all of the ingredients. Each dish has its own character, different flavour kicks and I believe this is what makes The Chairman so special.

Biji-jjigae (ground tofu stew) that my grandmother used to cook for my family when we arrive at her home late night after long drive from Seoul. It is a very old and vague memory, but I clearly remember the warmth of the bowl and my grandmother’s hug. I miss her and her food a lot, which I cannot have any longer.

Kimchi. It matches well with any types of cuisine (at least for me with my strong Korean palate) and it’s enjoyable by itself.

I usually plan my days off by booking restaurants from my ‘wish-to-go’ restaurant list. It is always enjoyable to explore different places while Cantonese cuisine is often the one that captures my interest the most. I also like to visit local fish markets when I am not in the kitchen. Just like a child going to the aquarium, I find the same excitement by checking out fresh local seafoods. Among all, Ap Lei Chau fish market was one of the most interesting places I’ve ever been.

Something you want to try while in Hong Kong?

When I arrived in Hong Kong, it was the time that COVID-19 just started. So, I didn’t have chance to travel other cities near Hong Kong. I hope I can travel to Shenzhen and Macau soon and try out their foods.

Also, I’d love to experience the kitchen in Cantonese restaurant as a stage. As a chef and a Cantonese food lover, it would be very exciting opportunity to experience and learn the new cuisines that I have never tried before.

Hong Kong Michelin Stars Korean food Korean restaurants cheat day Hansik Goo Steve Lee
Lorria Sahmet
Editor
After two years writing in luxury retail, Lorria now covers food and drink happenings in Hong Kong. When not taste-testing for the best fries in the city (shoestring, always!), find her at home obsessing over tableware and attempting a fruit garden on her tiny bay window. She is happiest by the ocean with a giant fishbowl-glass of Aperol Spritz.
Food Drinks Culture Living Hong Kong
Sign up for our newsletters to have the latest stories delivered straight to your inbox every week.