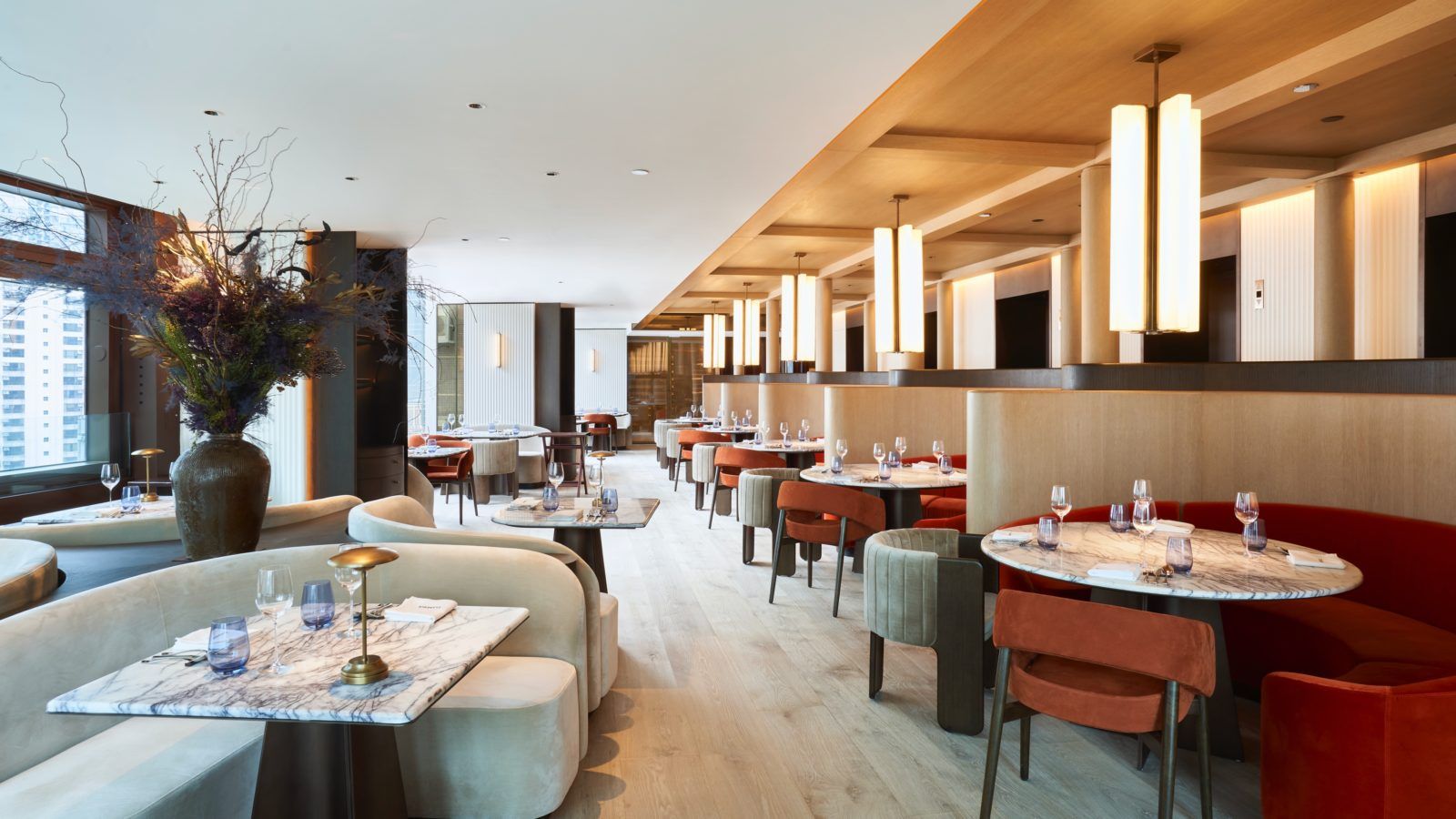 The stunning dishes at Olivier Elzer’s newly opened Clarence is unmistakably French, but you’ll find some Asian influences too — a result of Elzer’s long-time culinary journey around Asia. But no, it’s not fusion, it’s just classic French food, redefined.

A few first things to note of chef Olivier Elzer’s new H Code opening, Clarence: it’s of Elzer’s own ideation entirely, from the concept to the decor, down to the menu,; second, it continues Elzer’s distinct style of refined French cooking, with the introduction of his original, patented concept “Yakifrenchy“, and lastly, it’s completely, entirely different from any of his other restaurants, particularly L’Envol.

“[Clarence] serves French cuisine in a casual way which is outside of the common bistro or brasserie mould, and in lieu of fine dining,” Elzer explains of the concept. “We turn French cuisine on its head by making classic French dishes lighter through Asian cooking methods to allow gusts to discover French food in a new way.”

You can consider Clarence — named after one of Elzer’s favourite wines — the current pin-point in Elzer’s path through a star-studded career — 23 Michelin stars, in fact, with 27 years of cooking alongside renowned chefs including Jean Yves Leuranguer, Pierre Gagnaire and, as he speaks fondly of, Joël Robuchon. Clarence sets a renewed stage for Elzer to showcase an evolved style of French cooking, something that is beyond the neat, sophisticated setting you’d typically expect from traditional white-tablecloth establishments, but rather one of his own making: a boundary-breaking take of French cuisine developed in his creative style.

To find a cooking style of your own in an industry already filled with endless remakes on specific cuisines, especially one as prevalent as French food, is an especially difficult task. But Elzer manages to carve out a corner of his own with the invention of “Yakifrenchy”, a hybridised concept of Japanese yakitori with classic French ingredients. He credits the inspiration to mentor Jöel Robuchon, who similarly defined his niche with L’Atelier, joining French cooking with Japanese elements and small Spanish tapas portions.

And by some miracle, Clarence, currently helmed by protegé, chef Simon So, gracefully opened its doors in the midst of the fifth — Hong Kong’s worst — wave of the pandemic, minus a few expected blunders in supply chains, and braved, with immense success, through the lunch-only, two-per-table restrictions.

A New Face of French Food

Step out of the elevator and you’re welcomed into a spacious dining room of soothing tones of browns, beiges and creams, along with streams of natural light from the floor-to-ceiling windows that looks over the Tai Kwun courtyard. Come summertime, the windows also swing open — a unique feature of the building — for a breezy, alfresco dining experience.

Like the interiors, the space — which spans across the entire 25th floor — at Clarence is not marked by austerity, but rather a comfortable casualness that’s split over four different areas, each a different facet of Elzer’s renewed French-style cooking. Further back is The Lounge and Raw & Wine Bar, consciously designed to mimic a classic sushi bar experience, and from there, The Main Dining Room and Elzer’s favourite part of the space: Sommelier Room. A private tasting room — and passage way to a hidden back cellar reserved for the restaurant’s top spenders — anchored by a colossal 14-seater black marble table and fitted with vaulted brick ceilings, stepped red brick walls and endless racks of wine fridges along the walls to evoke a traditional French wine cellar.

“I wanted wine lovers like myself to discover lesser known labels and vintages at reasonable prices,” Elzer explains. “The wine fridges encapsulate a world of fine wine, housing the best of old and new world wines, as well as lesser known vintages to be discover from iconic producers and rising stars alike — some of which cannot be found elsewhere in Hong Kong.”

The menu is inherently a French affair, finished with distinct Asian influences that Elzer has grown particularly fond and familiar of during his many years of residency in Asia, including charcoal-grilling, steaming and teppan. Elzer does makes certain to clarify that while Clarence takes from Asian-style cooking, it is not fusion that he is serving, but rather a new face of French cuisine, fully reinterpreted yet still staying true to traditional French ingredients, flavours and techniques.

“Our dishes are constantly changing as a continue to learn new things,” he shares. “Clarence combines my experience of working 13 years in Hong Kong, with the soul, heritage and traditions of French cuisine and at the same time, tied in with my lifestyle.”

Other than the selection of one-biter Yakifrenchy skewers that’ll inspire a colourful journey through different provinces in France, the a la carte range is similar collection of hearty, wholesome French fare, served in huge portions as an homage to local dining culture of shared meals. It spotlights produce not commonly available in Hong Kong, with current signatures including the Skate Wing — Elzer’s personal favourite — cooked whole over teppan and seasoned with French meuniere sauce with added brown butter, Elzer’s secret spice blend and garlic confit and the charcoal-grilled 2kg Challans Duck breast brushed with a spiced-caramel glaze.

Compelled by an unwavering passion, Elzer not only has a complete bank of Yakifrenchy ideas waiting to materialise, but a selection of extensively well-thought out dishes that’ll assume their place on the menu as the seasons change. “20 percent of the menu will showcase daily and seasonal features,” Elzer unveils. “The plan for the next six months is to have a weekly rotation of new dishes.”

As I type this, Elzer already has a spring-appropriate lamb dish in the works: a whole-cooked baby lamb seared over charcoal — it might even already be on menus.

But sometimes things don’t always go as planned, even for a Michelin-recognised chef. With current supply chain issues, Elzer is met with the troubles of securing fresh ingredients from France. However, one magical part of being a Michelin-recognised chef is adaptability, combined with Elzer’s drive to continuously seek new inspiration. He’s already moved on to scouring local markets for hidden gems. “Freshness is the most important thing to me,” he adds.

“We were at Aberdeen Fish Market where I found some beautiful fresh sea snails, and we came back to Clarence where I tried some new recipes and they were phenomenal — my guests loved it,” Elzer recalls. “Next week, I’ll visit Ap Lei Chau to see what I can find.”

Come to Clarence for a sample of Elzer’s favourite wine or a taster of his ingenious creation that is Yakifrenchy — Elzer recommends the Ratatouille, a classic French veggie dish skewered and brushed over with pesto — then, make your way through every delicious thing else, including must-orders of black prawns with tonka bean and lemon peel and smoked trout.

“Of course the food will still taste and look good, but here we want you to be a bit raucous,” says Elzer with a laugh. “If you end the night dancing on the table, we won’t mind!”

Best visit with your dancing shoes, then.

Clarence is open Monday to Sunday from 12 to 6pm. Last seating is at 4:30pm. Reservations can be made here.

Clarence
Address
25/F, H Code, 45 Pottinger Street, Central, Hong Kong
Website
Clarence
Phone
+852 3568 1397
Hong Kong French Cuisine Olivier Elzer clarence yakifrenchy simon so
Lorria Sahmet
Editor
After two years writing in luxury retail, Lorria now covers food and drink happenings in Hong Kong. When not taste-testing for the best fries in the city (shoestring, always!), find her cosied up at home skimming through Netflix or nurturing baby plants in her indoor greenhouse. She is happiest by the ocean with a giant fishbowl-glass of Aperol Spritz.
Food Drinks Culture Living Hong Kong
Sign up for our newsletters to have the latest stories delivered straight to your inbox every week.