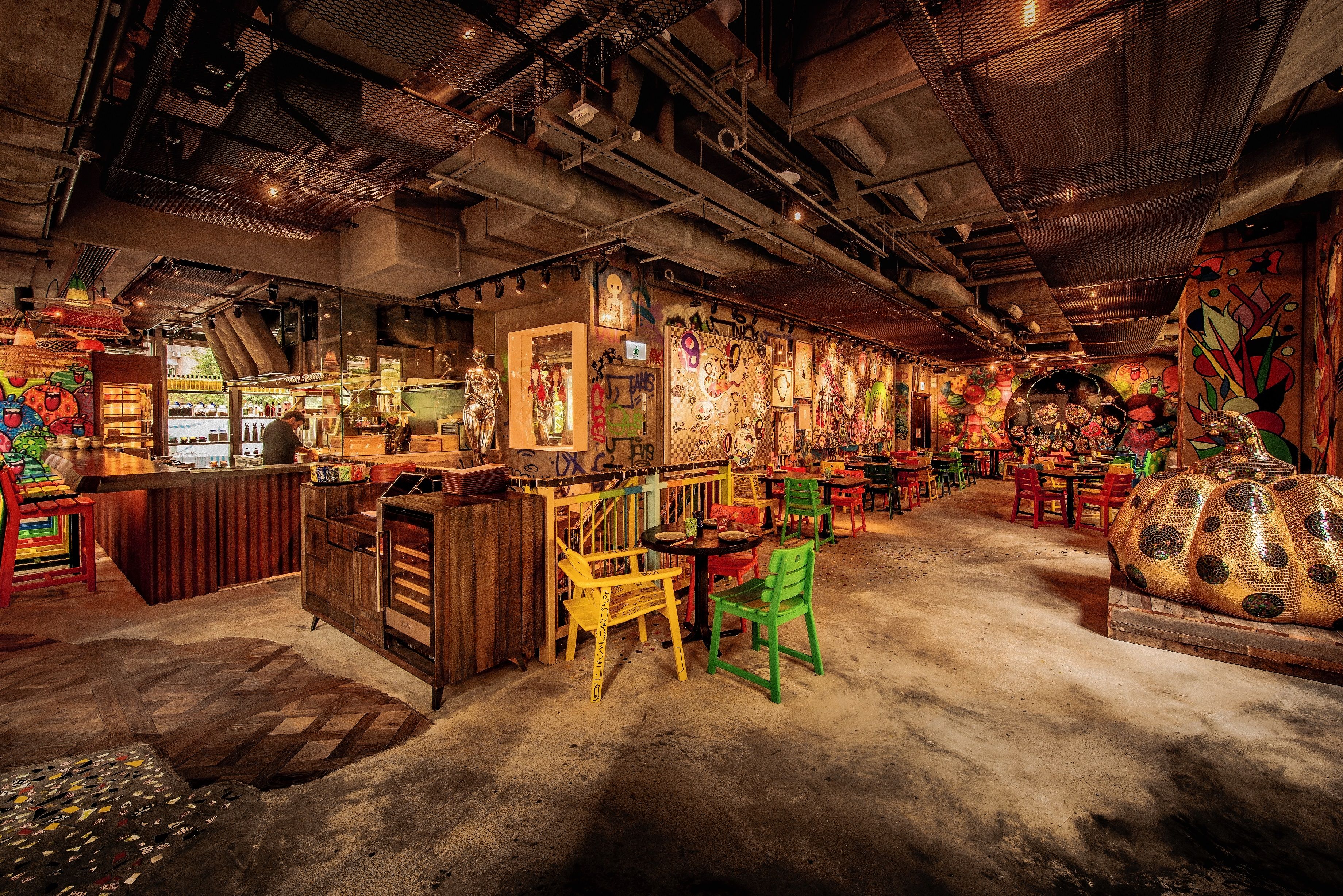 Wanchai’s reputation as a dining hot spot seems to only grow larger with each passing month, and now there’s one more newcomer to add fuel to the fire. Part of Le Comptoir  — the group behind Bibo, Tri, The Ocean, Cabana and Hotshot — Djapa brings Nipo-Brasileiro (Japanese-Brazilian) art and cuisine to newly revamped Lee Tung Avenue, making it the first restaurant in Hong Kong to explore the intersection of these two cultures. (Djapa is set for a late September debut, meaning it should be open any day now.)

The two-storey space has been spectacularly designed by three Brazilian artists — TOZ and mural-making duo Bicicleta sim Freio (Bicycle without Brakes) — and is inspired by the colourful art found in Brazil’s one-of-a-kind favelas. Le Comptoir found the artists via social media and invited them to bring the look and feel of Brazil to Wanchai. Their creations are complemented by additional works by artists such as Takashi Murakami, Yayoi Kusama, Hajime Sorayama, Masakatsu Iwamoto and Tomaz Viana.

The ground floor is a relaxed bar and lounge with floor-to-ceiling windows and a selection of more than 300 Japanese whiskies, wines and fine Japanese sakes. Cocktails inspired by Brazil and Japan are also on offer, such as the Djapa Refresher (Twin Alps blended whisky, Liqueur Shrubb, five different citrus juices, maple and lemon-thyme soda) and the Amazonian Dew (lemongrass, Madagascan-vanilla vodka, lavender eau de vie, fresh watermelon and sour-cherry cordial), uniquely presented inside an ice ball.

Upstairs, the first floor houses a casual dining room with an open kitchen, chef’s counter and industrial-chic setting. Overseeing the menu is executive chef Angel Romero, who draws inspiration from both countries. His kitchen features robatayaki for grilling, clay pot stations for slow cooking and a dry age cabinet for maturing beef to produce new flavours and textures.

Romero’s dishes are culinary mash-ups of Japan and Brazil. For example, the tropical camarao features cassava and shrimp flambéed in Cachaça (a Brazilian liquor made from sugar cane), which are then paired with Japanese tomatoes and squash, as well as fresh green papaya and mango, and topped with a sweet and sour sauce. Similarly, the ‘suntanned’ crabs feature Sawagani (Japanese river crabs) served on a bed of ‘sand’ made from farofa, a traditional Brazilian side dish made from cassava flour, with the non-traditional addition of Yamagata pork belly and Hokkaido black soy beans. Robata (skewers) will form a large part of the menu, with selections of beef from Japan’s best beef regions such as Kobe, Ohmi, Miyazaki, Kagoshima and Hokkaido. Chicken, pork, seafood, and even fruits and vegetables will round out the grilled offerings.

Lest you think the concept seems a bit random, it’s worth noting that Brazil is home to the largest population of Japanese people outside of Japan. That legacy began back in 1908, when Japanese immigrants arrived to work on coffee plantations, and many of them never left.

The art and whisky selection alone are enough to make us want to visit Djapa, but combining cultures and giving us a taste of something we can’t find anywhere else in Hong Kong? That’s just brilliant.

Wan Chai Dining Japanese Food Restaurants Wanchai Brazilian Food Djapa
Michael Alan Connelly
Head of Digital Content
A Chicagoan by birth and a New Yorker by habit, Michael has more than a decade of experience in digital publishing at leading titles in the U.S. and Asia. When he's not checking out Hong Kong's newest restaurants and bars or jet setting around the globe, you'll find him hanging out with his dog Buster and enjoying an Aperol Spritz.
Travel Hotels Restaurants Cocktails Culture Italy Art Music Cheese
Sign up for our newsletters to have the latest stories delivered straight to your inbox every week.