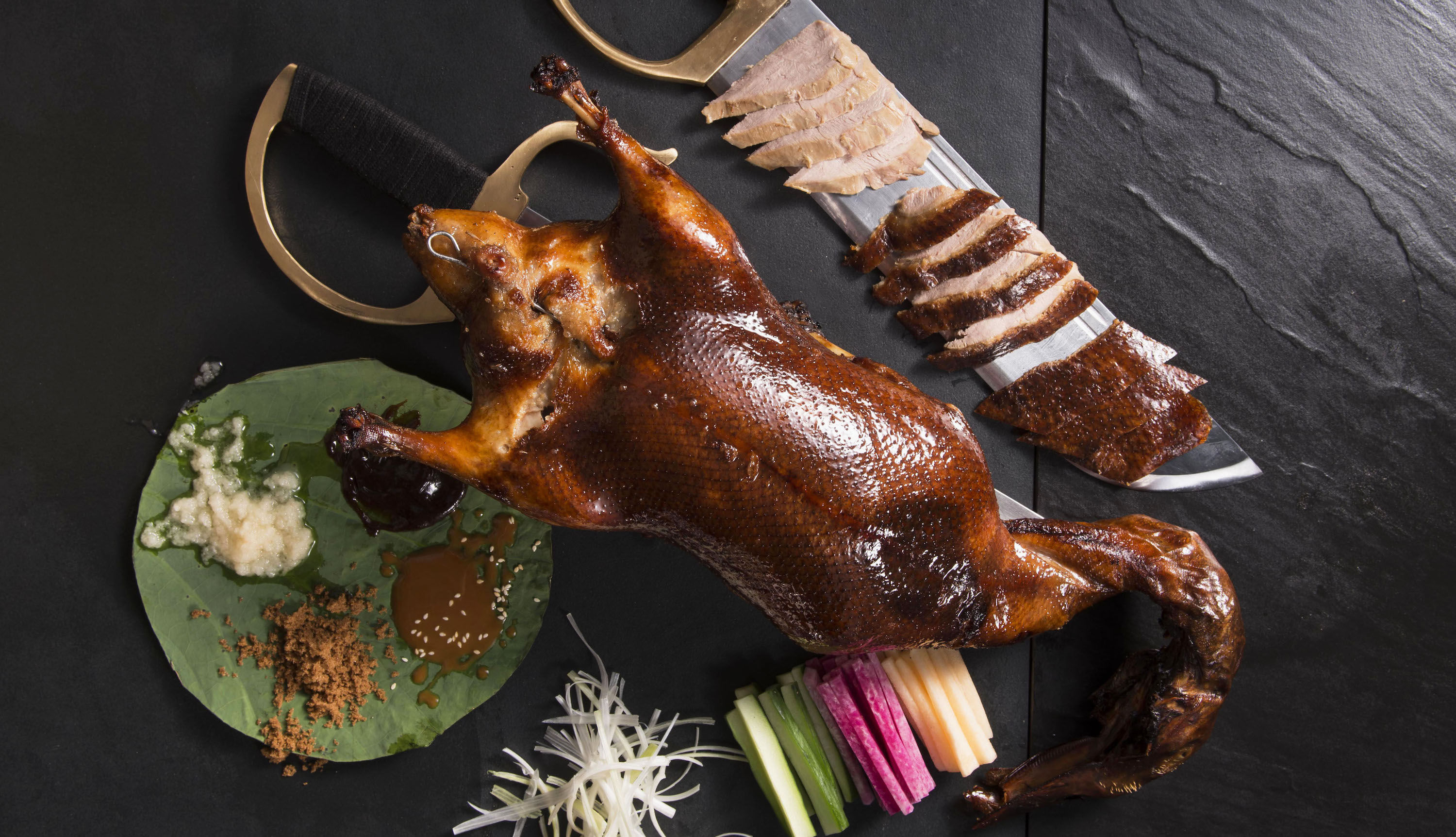 We’ve seen a lot of concepts come and go in Hong Kong’s dining scene, but one that’s designed like a Kung Fu academy and caters to Bruce Lee fans is certainly a novel addition to the mix. Dining Workshop — who opened Urban Park and the Insta-worthy Yum Cha earlier this year — are throwing open the doors to Dragon Noodles Academy on 21 November, presenting Hong Kong food updated for the modern age.

“DNA” for short, the contemporary Chinese kitchen takes the basic ingredients and so-called lifeblood of traditional Cantonese cuisine, and puts a modern spin on it — “reviving the past, and inventing the future at the same time,” says Dining Workshop founding partner Benjamin Ang.

While the food represents a forward-thinking evolution, the décor is a definite throwback to the past. Aiming to recreate the feel of a 1970s Kung Fu academy, the restaurant features a hard-carved, five-metre-long gold-painted dragon as its show-stopping centrepiece. The back wall is lined with 12 handmade lion heads, and guests stopping by on the weekend from 26 November to 4 December can also catch a traditional lion dance with their meal.

As for the menu, the staple noodle is the dominant carb, and the lobster the celebrated protein (a lobster noodle station will feature in DNA’s open kitchen). Mimicking the skills of a kung fu master, DNA’s chefs will pull handmade noodles from scratch every day, to be used in the signature dish: lobster three ways — lobster claw, lobster tail meat wontons, and grilled lobster tail — served in a slow-simmered broth. Meanwhile, the crustacean also makes its way onto the dim sum menu, which includes turnip cake with lobster, lobster meat dumplings and the crispy lobster puff — a twist on the traditional radish puff pastry, painted with carrot juice to resemble a lobster tail.

Look for these deceptive twists throughout the menu, from the winter melon balls dipped in blueberry sauce to resemble a bunch of grapes, to the ‘candy sausage rolls’ which are filled with preserved sausage but painted green and pink and twisted up at the ends like wrapped candy. A playful menu, no doubt, which will cater to our whimsical fancies as well as our palate for traditional Chinese tastes.

Meanwhile, the bar brings to mind a traditional Chinese clinic with its apothecary cabinet-lined walls and Chinese herb containers filled with a variety of spirits and liqueurs. Let’s just hope the bartenders are just as skilled as kung fu masters in whipping up some extraordinary cocktails.

Cantonese Cuisine Dining Restaurants Dim Sum Noodles Lobster DNA dragon noodles academy dining workshop peking duck
Leslie Yeh
Editor in Chief
Having worked as a lifestyle editor for almost 10 years, Leslie is thrilled to be writing about the topic she loves most: wining and dining. When she's not out pounding the pavement for the latest new restaurant opening or tracking food trends, Leslie can be found at home whipping up a plate of rigatoni vodka and binge-watching Netflix with a glass of Sauvignon Blanc in hand.
Dining Restaurants Food Trends Drinks Travel
Sign up for our newsletters to have the latest stories delivered straight to your inbox every week.