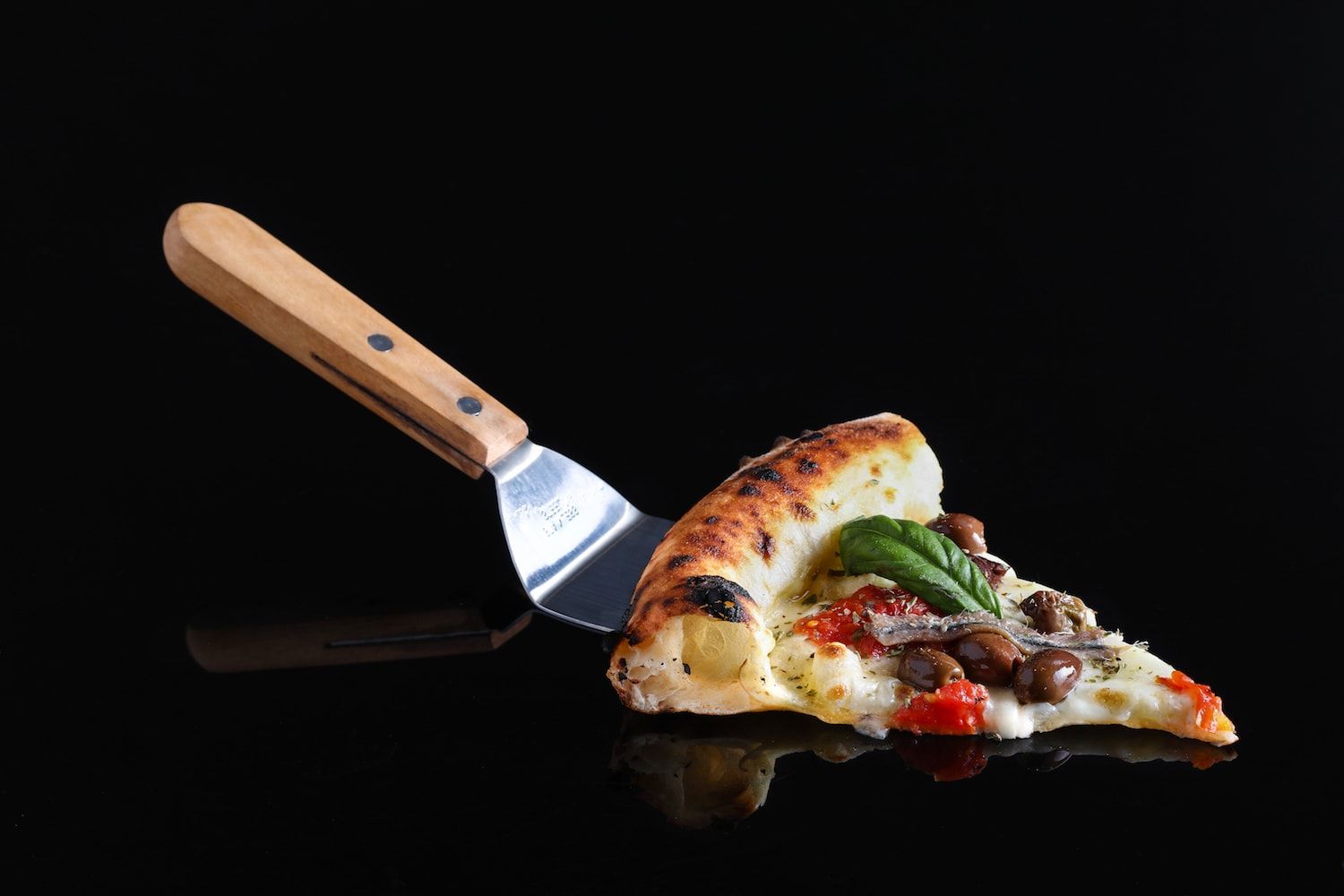 What to eat at Kytaly, Hong Kong’s best new pizzeria

New Yorkers have their quintessential pizza slice (triangular and handheld, with low-moisture mozzarella and an even cheese-to-tomato sauce ratio); and Chicago has their deep-dish pie (bulky, medium crust with supremely thick layers of cheese and fillings); but when we’re craving the holy trinity of mozzarella, tomato sauce and basil — all on a deliciously chewy and crisp dough — there’s only one pizza we care to eat: Neapolitan.

There’s something utterly craveable about Neapolitan-style pizza: the puffy cornicione (the pie’s outer lip) blistered in a ferociously hot wood-fired oven, giving way to a floppy centre which needs little more than a sparse topping of high quality tomatoes and melty mozzarella. Hong Kong has a handful of places that do a decent Neapolitan-style pie, but very few, if any, that truly transcend the realms of pizza perfection. Recently, a pizzeria (or an upscale full-service restaurant that happens to just serve pizzas, rather) has popped up on Wyndham Street, helmed by the preeminent pizzaiolo Franco Pepe, who’s topped the 50 Top Pizza list (modelled after 50 Best Restaurants) for both years since it debuted in 2017. But we weren’t to be so easily convinced: A little skepticism is handy in a town that has a history with imported concepts that under-deliver, buoyed by some big-name chef slapping a name on a brand from halfway around the world.

Luckily, it’s good news for all pizza fans out there: We had an exclusive first taste of newcomer Kytaly and can confidently report that all the awards and accolades — not to mention all the fanatical endorsements by top global food critics — are unbiased in their assertions. Beyond the shadow of a doubt, Kytaly serves the best pizza to be had in Hong Kong right now.

It starts with the dough: Pepe’s proprietary blend based on 70% water content, which allows for the crust to rise a good 3–4 inches in the oven yet still be almost hollow inside, save for a few pliable strands that stretch from one side of the crust’s inner cavern to the other. The outer lip springs back brilliantly thanks to the strong gluten network, boasting delicious pockets of blistered bubbles on the surface while breaking open into a warm, all-enveloping yeasty aroma. With a shiny, caramelised top from a brush of olive oil, it’s one of the loveliest, puffiest crusts we’ve ever seen: a thing of pure carb perfection.

Then there are the ingredients: Every topping is of the highest quality sourced from around the region of Caiazzo (some 30 miles north of Naples), home of the original Pepe in Grani restaurant. As a proponent of the Kilometre Zero movement (Km 0), Pepe sources only from nearby suppliers, from the tuna to the anchovies — even ditching exalted San Marzano tomatoes for the local Riccio variety. Every single ingredient used in Kytaly Hong Kong is flown in from Italy, meaning the pizzas (19 in total) are made with exacting measures to replicate the original Pepe pizzas. Pair this with the creative toppings combinations and you’re on a straight highway to pizza heaven.

Sadly, this is no humble slice: prices range from $200–$300 per pizza, which beats even the more pricier pizzerias in town. And while we’d love to tell you that it’s big enough to share, the whole point of the feathery dough and the smaller circumference of classic Neapolitan pizza is to facilitate the one pizza per person rule, allowing you to have a whole delicious pie to yourself and still make it out the door.

All that being said, Kytaly is truly a mecca for the most devoted of pizza aficionados. Below, see the top five pizzas we tried. 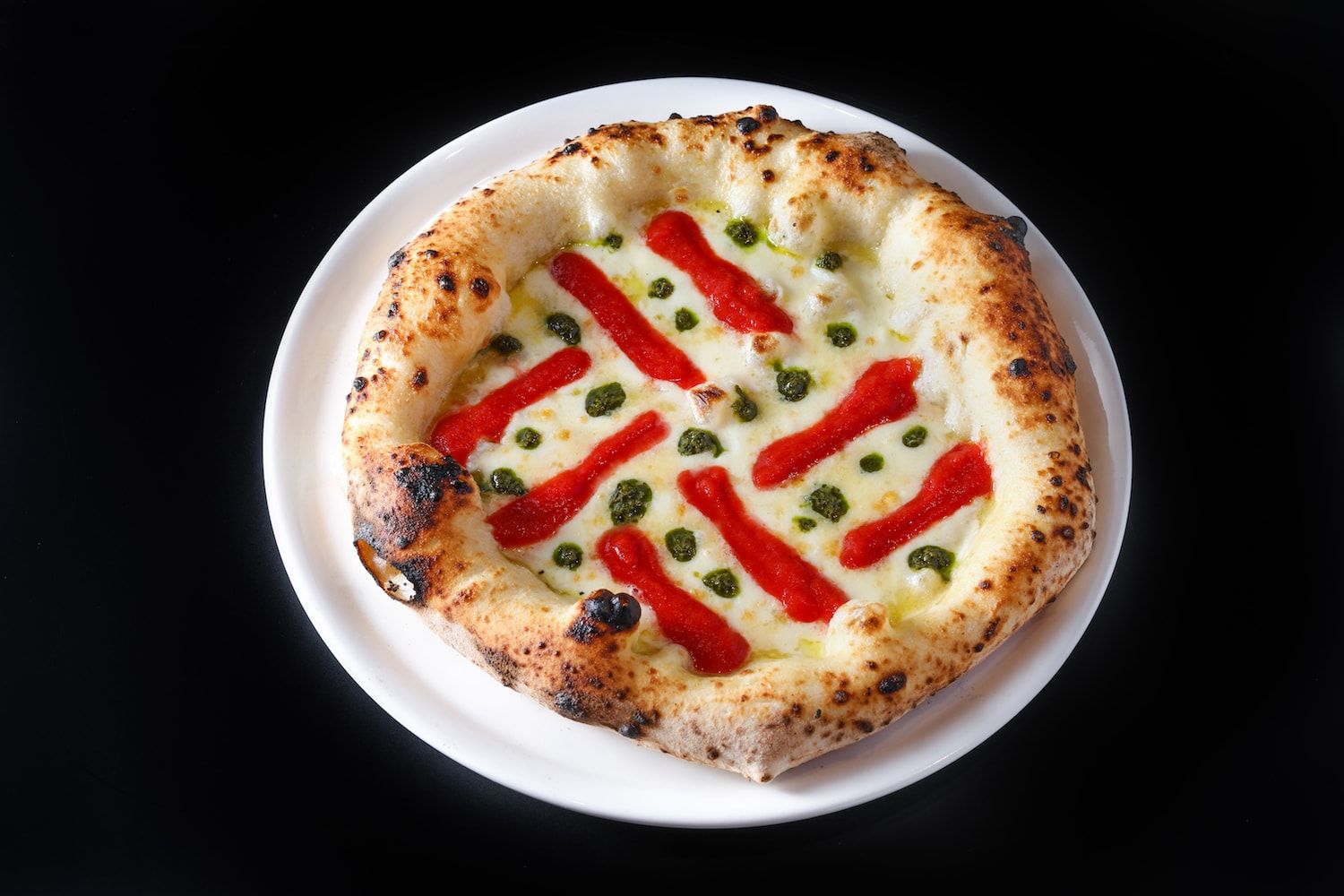 Margherita Sbaglia
If you thought the classic margherita pizza couldn’t be improved upon, you’ve probably never had Pepe’s Margherita Sbaglia (HK$200). Pepe’s signature (and the winner of 50 Top Pizzas) exemplifies everything this master pizza maker is about: taking the best components of a great pizza and elevating them even further — even if it means eschewing old Italian pizza-making traditions. In this case, the classic margherita gets revved up to the power of 10, with each ingredient — from the shockingly bright tomato sauce, to the dots of basil concentrate, and a golden layer of 100% buffalo mozzarella from Campania — amplifying everything that’s to love about a classic margherita pizza. It might not be the best-looking of the bunch, but it’s considered pizza royalty for a reason. 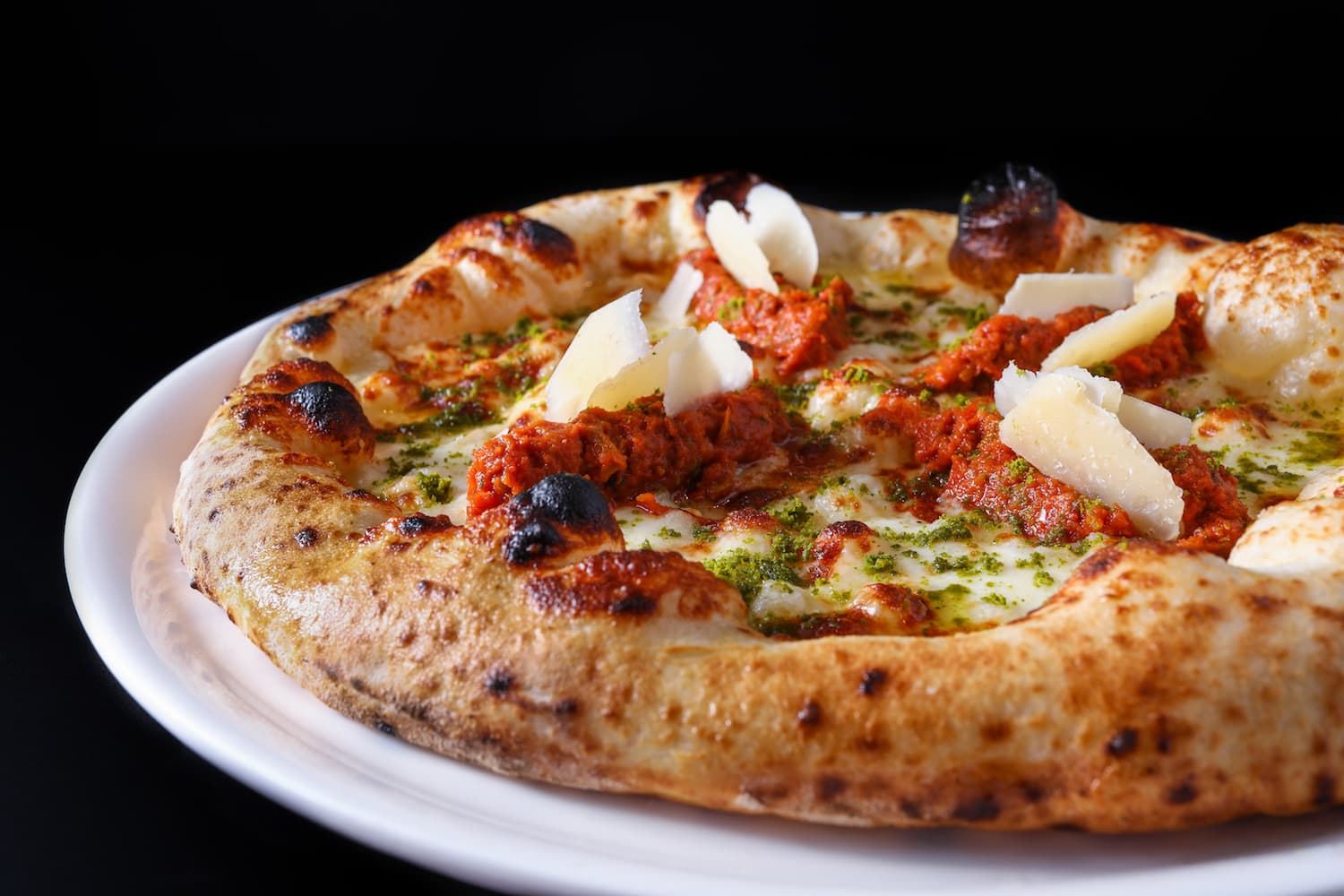 Scarpetta
Coming in second place is the Scarpetta (HK$280), similar to the margherita in its reliance on the tried-and-true trio of cheese, basil and tomato. Another seemingly simple yet intensely flavoured pie, the thin crust is given weight and depth by a thick layer of mozzarella mixed in with a luscious Grana Padano cream sauce, dotted with scoops of three-tomatoes compote and sprinkled with freeze-dried pesto. This pizza brings into sharp focus Pepe’s attention to the interplay between cold and hot: As with fresh herbs, Pepe prefers to add the shavings of 24-months aged Grana Padano cheese after the pizza is cooked so as not to detract from the original taste of the ingredients. Tangy and delicious, it’s a clear winner in our books. 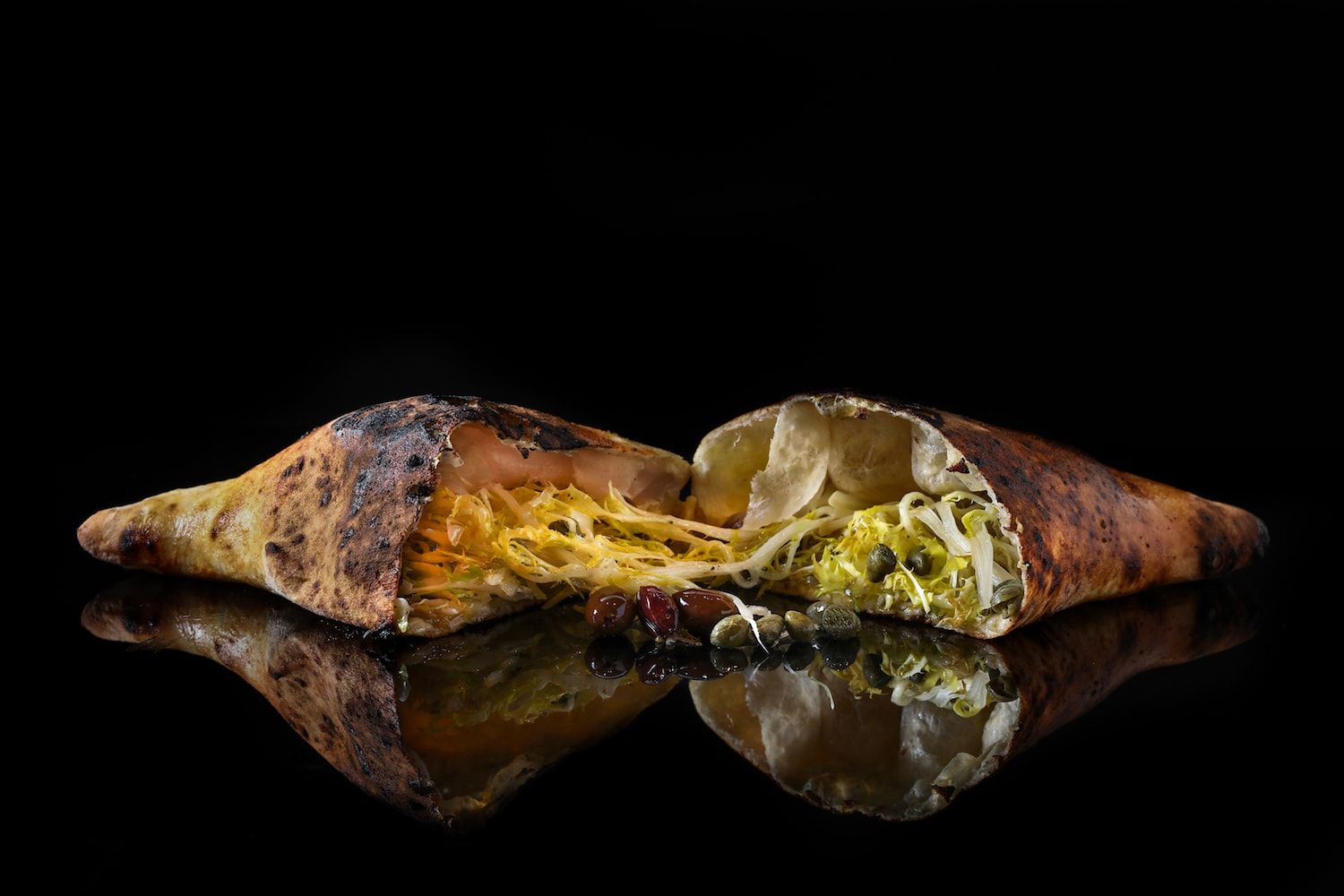 Calzones are perhaps their own category in the pizza universe, but Pepe’s version (HK$280) holds its own against its open-faced counterparts. The puffy, burnished crescent arrives split open at the middle, it’s fillings oozing into an irresistible pile of melty mozzarella, crumbles of fresh ricotta, scamorza cheese adding a piquant bite, and pink streaks of salami from the Black Casertano pig of Campania. The top layer of dough is ethereally thin, like the centre of a Neapolitan pizza turned inside-out, speckled with proper char and brushed with the thinnest layer of tangy tomato sauce. 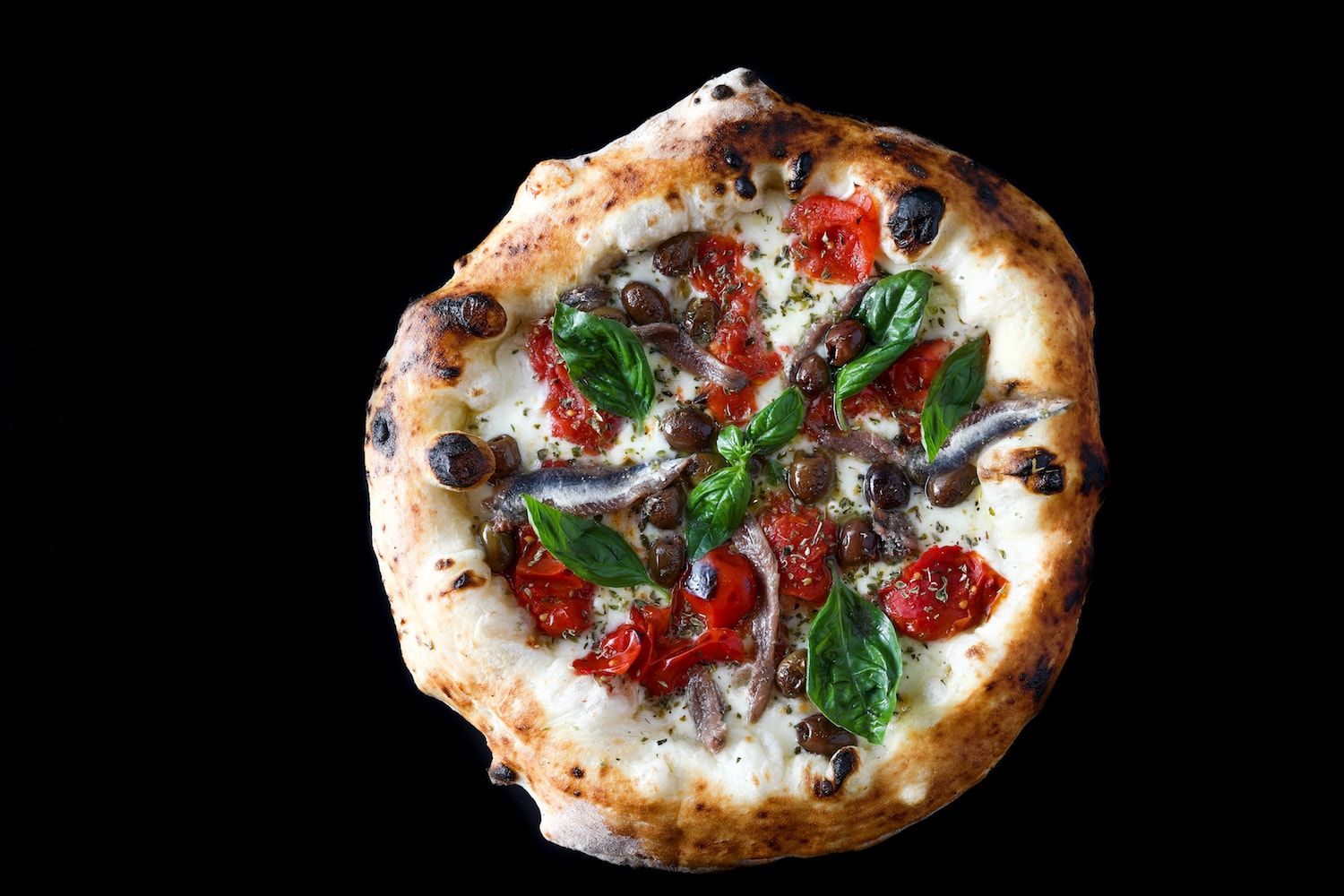 While we’re not one to have an aversion to anchovies, the Sole Nel Piatto’s (HK$300) combination of olives and anchovies can be slightly salty and overpowering — the only reason it clocks in at #4 on our list. But if you love big, bold flavours, this one’s for you: The fat strips of Cetara anchovies add a pungent, salty, umami-laden punch to each bite, with soft Piennolo tomatoes, a liberal dusting of oregano, and bright-green basil (added just as the pizza’s hot out of the oven, as per Pepe’s style) counteracting the fishy saltiness with a bright, herbaceous note. 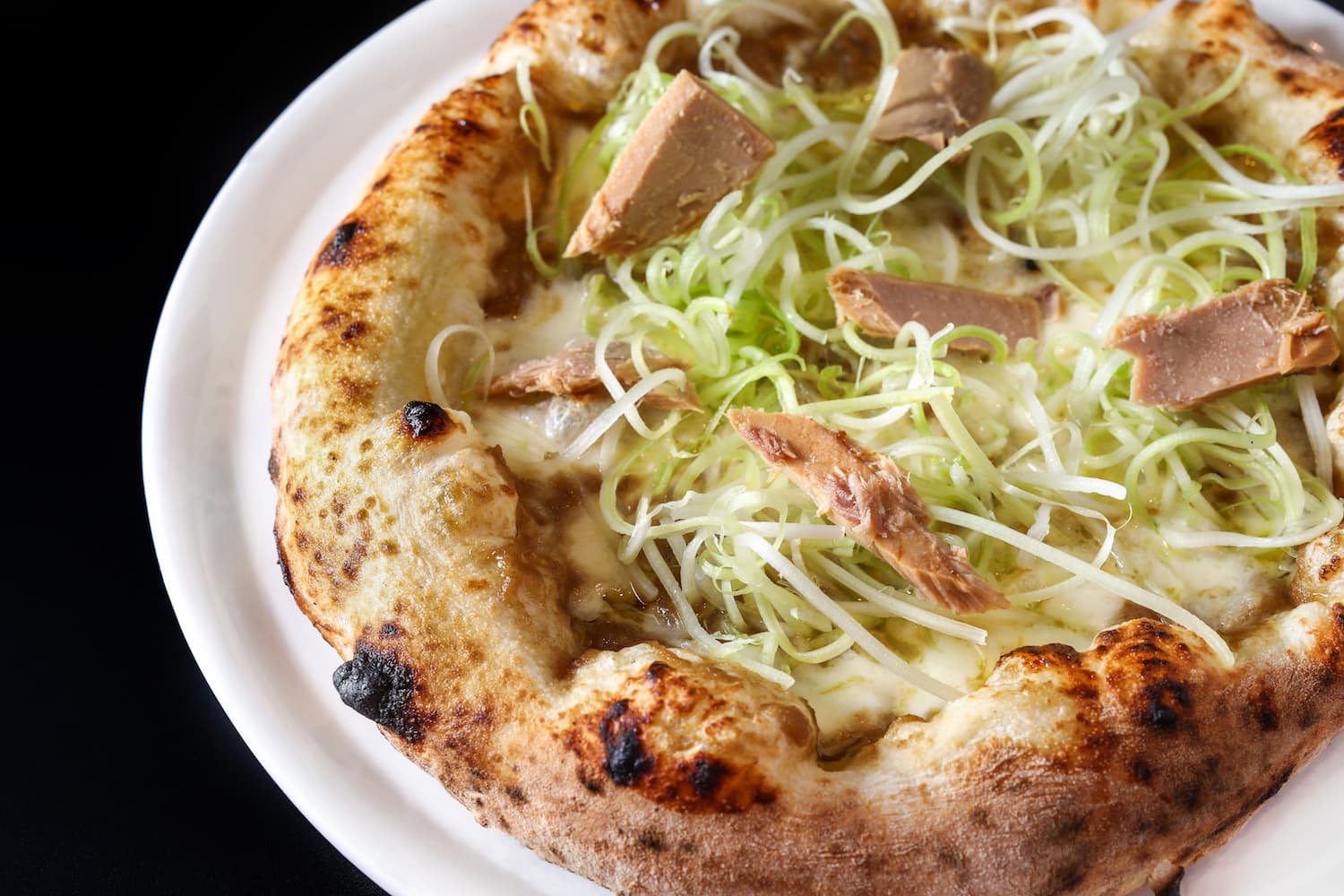 Pepe isn’t one to play by the books, but the Alletterata (HK$300) is indicative of just how far his creativity stretches. Again playing with hot and cool textures, sweetness and saltiness, creaminess and crunch, the Alletterata is almost like the pizza version of a tuna sandwich, made artful and refined. Whispers of celery shavings get “baked” in an ice bath, curled around meaty strips of tuna alletterato, caught off the coast of Italy. Tying this pizza together is a spread of sweet onion cream, which adds another caramelised layer to the crust, and provides a sweet and succulent foil to the vegetal notes of the celery. As inventive as it gets, the Alletterata ticks the boxes for both flavour and creativity.

Hong Kong New Restaurants Pizza Dining Restaurants Hong Kong Dining New Restaurant Where to eat new openings where to eat pizza best pizza kytaly neapolitan pizza franco pepe
Leslie Yeh
Editor in Chief
Having worked as a lifestyle editor for almost 10 years, Leslie is thrilled to be writing about the topic she loves most: wining and dining. When she's not out pounding the pavement for the latest new restaurant opening or tracking food trends, Leslie can be found at home whipping up a plate of rigatoni vodka and binge-watching Netflix with a glass of Sauvignon Blanc in hand.
Dining Restaurants Food Trends Drinks Travel
Sign up for our newsletters to have the latest stories delivered straight to your inbox every week.