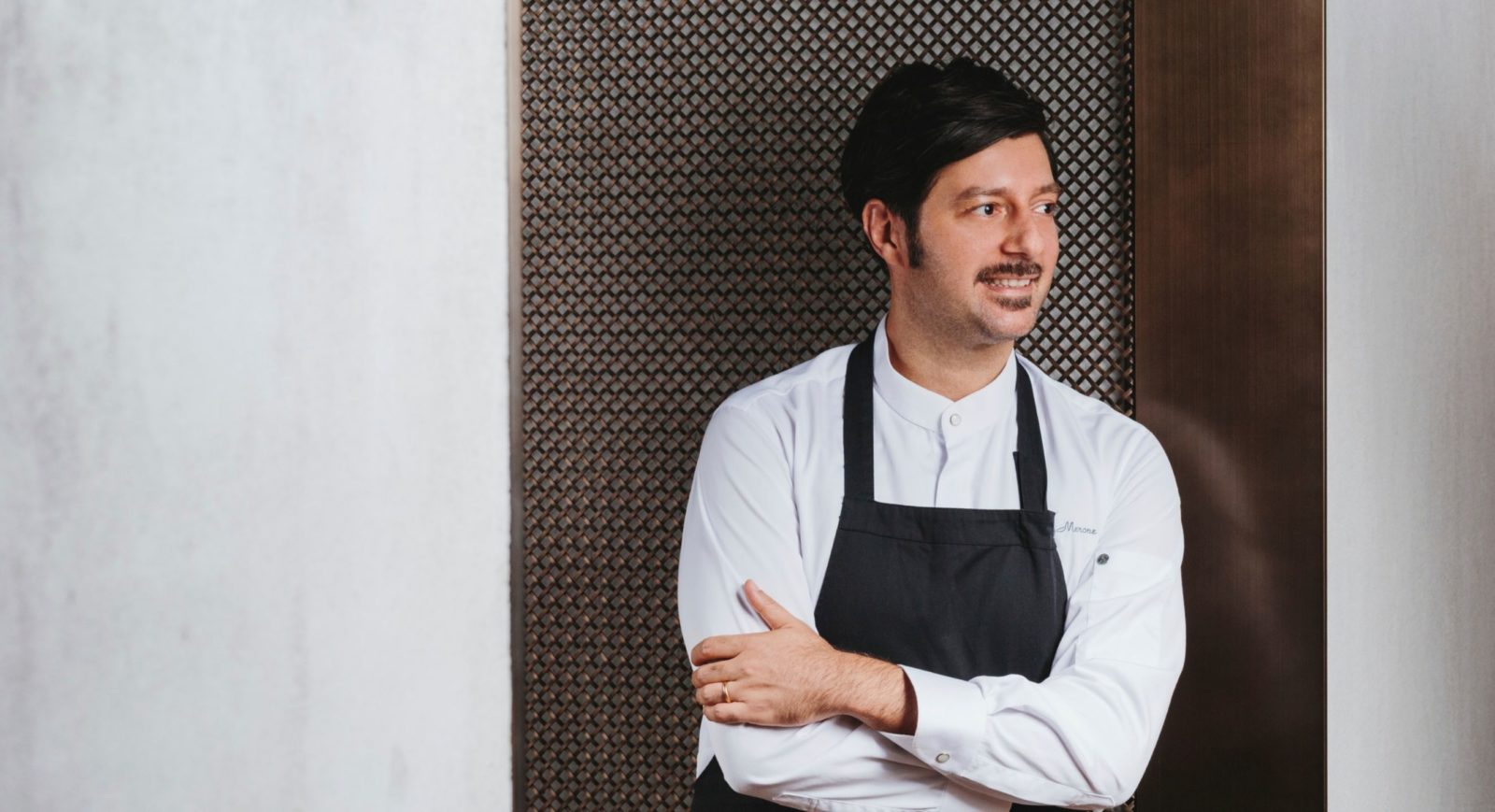 Food & Drink
At Estro, Chef Antimo Maria Merone is rewriting the rules of Neapolitan cuisine
Share this article
Next article

A family farm in Italy. Hanging with artists in Berlin. Upholding Umberto Bombana’s vision in Macau. The chef dishes on how these experiences and more inspired the menu at his first restaurant, Estro.

Antimo Maria Merone’s love of cooking was born, like seemingly many Italian chefs, in his grandmother’s kitchen.

Raised in Pozzuoli — a town just outside of Napoli — it was where he immersed himself in culture of Neapolitan cuisine, developing a lifelong appreciation for freshly caught seafood, fine wines, seasonal ingredients and most importantly, cooking to bring happiness to the people you love. At Estro, his newly opened restaurant on Duddell Street, Merone has crafted a culinary experience that recreates those memories — each telling a story or evoking the spirit of his upbringing in southern Italy.

“My mother told me I was addicted to tomatoes since I was a child,” says Merone. “When I was just a toddler, I could barely walk on my own feet, and I crawled outside of our home to steal and eat the tomatoes that were ripening in the sun on the balcony.”

And now, inside a beautifully designed space by André Fu Studio and in partnership with JIA Group, Estro is Merone’s first restaurant of his very own. What’s more, it’s an opportunity he’s using to change the way people think about his native cuisine, and his homeland in general — which is to say, if all you know of Neapolitan food is pizza and ice cream, you’re in for an education, as well.

“They are missing a whole culinary world, and I hope with Estro, I can bring some of our heritage to light,” he says.

Lifestyle Asia reached out to Merone to talk Neapolitan eats, his inspirations and the experience of launching his own restaurant.

What is Neapolitan food and how does it differ from other Italian cuisine?

There is much diverse regional cooking in Italy, and even within the same region, there are many micro-cuisines. I come from Pozzuoli, a town just next to Napoli, where I went to school and lived most of my teenage era.

Our food is very focused on carbs and seafood, fresh and direct preparations. We use a lot of dry pasta, eggplants and of course, tons of tomatoes. Our food has an incredibly long history, and one of the first Italian cookbooks is the Cucina teorico-pratica from Ippolito Cavalcanti, a Neapolitan aristocrat, published in 1839.

After decades of being a region dominated by countries like France and Spain, our food is highly linked to these heritages. For example, babà, ragù (from the French ragout) and scapece (from the Spanish escabeche) were all born during that era, and became traditional Neapolitan after time.

What was the most important thing you learned from cooking with your grandmother?

The most important thing she taught me was cooking with love and bringing happiness to your loved ones.

How did your time in Berlin shape your approach to cooking?

Berlin gave me a lot of inspiration. I was hanging out all the time with different artists, from photographers to fashion designers. This experience helped me a lot to develop my creativity.

What helped you make the leap to launching Estro?

It was without a doubt when I met [JIA Group CEO and founder] Yenn Wong, we immediately connected. Even though we are facing a challenging moment, not only in the F&B industry but also worldwide, I’m very appreciative we could still bond and promise each other to make something exciting happen together in the near future.

Which dishes from your childhood have you been able to recreate in the restaurant?

Buttons, this Bottoni dish is undoubtedly one of these. Reimagining one of my favourite dishes, eggplant parmigiana, into a totally new form and shape — keeping the intensity of the flavour, but changing shape, texture and cooking method.

Talk about the space a little — how does it evoke the Neapolitan spirit, and what does it mean to you?

The space is warm, the colour palette, the sinuosity of the space are all connected to my Napoli dream. But on the other side, the dining room is modern. It could be anywhere in the world, and there is no stereotype, no obvious details. Instead, André Fu has meticulously designed everything to immerse our customers into our luxury salotto.

To me, my favourite indulgence will be seeing my guests’ happy faces when they are eating my dishes. I hope people can see the love and the passion behind this project, from design, to the service to the food. We aim to be a place where people come to experience our idea of hospitality at 360 degrees.

Estro is currently open from Tuesday to Saturday (from 6:30pm) and serving both a six-course (HK$1,480) and eight-course (HK$1,880) menu. Reservations can be made here or via reservations@estro.hk.