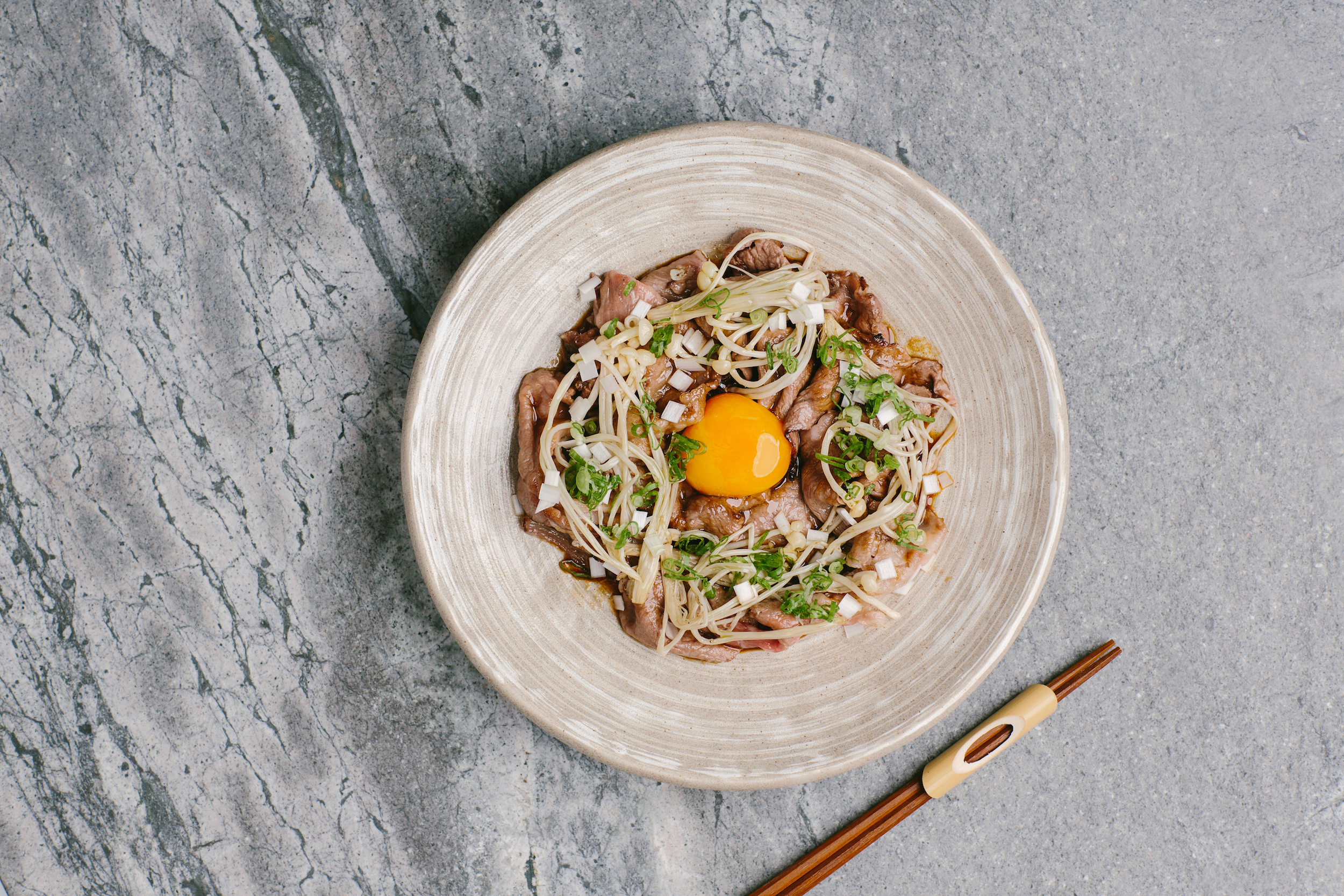 First look: Fukuro offers fun izakaya vibes with a side of refinement

Food & Drink
First look: Fukuro offers fun izakaya vibes with a side of refinement
Share this article
Next article

Step through the sliding doors of the newest dining addition to Elgin Street and a rousing chorus of “Fukuro!” (meaning “owls” in Japanese) will greet you as you enter the dimly lit basement, which has been decked out in grey concrete and reclaimed wood. The enthusiastic outburst is an instant cue that you’ve entered an underground izakaya, that most beloved blue-collar staple on the wide spectrum of Japanese dining traditions, where the promise of flame-kissed skewers and free-flowing sake hangs thick in the air.

The spirited greeting from the staff is likewise an unmistakable sign that you’ve entered a Black Sheep Restaurants establishment, where the theatre of dining, art of hospitality, and emboldened confidence have meshed into a well-oiled machine that seems to run more seamlessly with each new restaurant opening. Even at an exclusive preview for Lifestyle Asia in advance of Fukuro’s opening, the service felt as practised as if the restaurant had been on the scene for a decade.

If you want to be one of the first in line when the restaurant opens on 15 May, keep your eyes peeled for the obscure, charcoal-painted storefront on Elgin Street, just two doors down from Ho Lee Fook. (HLF alumni Shun Sato has been appointed as head chef, with Jowett Yu helping to oversee the kitchen). Inside, the restaurant offers a pared-back aesthetic that’s a rare departure from the intricately detailed décor found in recent BSR openings such as New Punjab Club and Osteria Marzia — not to mention  at Ho Lee Fook, where despite the same dark basement feel, the flashy décor includes a wall of synchronised waving maneki-neko cats and walls plastered with vibrant “King of Kowloon” paintings.

At Fukuro, the walls are kept bare and clean, dark lines dominate, with spotlights shedding just enough light on tables to get the requisite Insta-worthy shots. The hip soundtrack and effortlessly cool (and rather good-looking, we might add) wait staff, add to the feeling that you’ve just sat down at the trendiest izakaya in town. While comparisons to that other modern and hip izakaya — Yardbird — might feel inevitable, luckily there are enough unique and creative dishes here to draw a distinct line between the two.

The menu is a succinct one-pager; categories include Raw, Snacks, Tempura, Nimono (a simmered dish), Robata, and Noodles/Rice. We whet our palates with the spinach ohitashi (HK$58), three tree trunk-like cylinders arranged on the plate, the surfaces shaved diagonally to allow extra surface room for a generous coating of sesame seeds. Squeezed of its juice, the blanched spinach retains its tautness and crunch, seasoned with a quick swipe in a sesame and soy dressing. Next, we pick over a plate of crisp vegetables pickled in yuzu (HK$58), enjoying their delicate tartness before a platter of assorted sashimi (HK$298) arrives on ice, accompanied by a dish of aged soy sauce and yuzu. We’re partial to the kingfish for its buttery richness, and also the smoked bonito, with the fish’s skin cured in vinegar to impart extra umami depth.

Agedashi tofu (HK$78) arrives next, the wobbly blocks of tofu dusted in a thin layer of potato starch before being delicately fried. This style of tofu often falls victim to an overpoweringly salty sauce, but Fuguro’s version shows restraint, favouring a dominating whiff of ginger in place of salty soy, and enough mirin and sake to make you slightly woozy. Flecked through the sauce are a handful of pinky-sized shimeji mushrooms, while a flurry of bonito flakes and coriander help lift the flavours.

If the menu feels a little too healthy at this point, the crispy caramel butter corn (HK$68) should tip the scale — an unapologetic mass of fried beer, potato and corn starch batter clinging in-between the individual kernels on the half-moon cobs. We polish these off in no time, savouring the sweetness of the buttery caramel and the dusting of spicy salt and seaweed on top.

It’s an easy segue into the heavier items on the menu, of which our favourite is the sukiyaki (HK$258). Chef Sato uses premium grade A4 Wagyu here (from the shoulder blade of the cow), drizzling the sukiyaki sauce over the supremely tender folds of beef instead of dunked into the traditional soupy bowl. The effect is to intensify the flavours and juiciness of the just-cooked meat — which would be lost in a hot broth — while a golden, cured egg yolk coats the dish in an extra layer of unctuousness. To adhere to traditional flavours, the beef is scattered with bundles of enoki mushrooms, with a flurry of smoked negi (Japanese green onion) adding an herbaceous bite.

We cap off the evening with the yaki udon (HK$178), noodles sautéed in a luscious crab miso sauce; it’s slicked with butter and topped with fresh snow crab meat and crunchy gai lan. It’s another thoughtfully constructed dish packed with flavour and perfect for sharing. The only thing we might change would be to add more texture and bite to the noodles.

For dessert, options are kept simple — a smart proposition for guests who may have engaged in too many rounds of sake shots by the end of the night. An intriguing  seaweed ice cream arrives topped with black cherry coulis and sandwiched between two crisp Japanese rice biscuits (HK$48 per piece). While we enjoy the flavours, we suspect some diners may prefer to have more options for the ice cream to suit their tastes.

Of course, dinner at a BSR restaurant is not complete without overt acts of hospitality — the manager Si Kang stops by often to top off our whisky highballs; towards the end of the meal, he pours us a generous glass of sake which overflows into a traditional masu, a wooden box often used for drinking sake thanks to its woodsy oak properties. This act is a tradition at many eateries in Japan, signalling the generosity of the owners as well as their appreciation for your business. Between the sake and highballs and the cosy, den-like atmosphere of the restaurant, it’s all too easy to pass the hours by and feel the work week slip away.

There’s plenty to love about Fukuro, and we’re already looking forward to our next visit to sample more dishes such as the veggie tempura and Wagyu beef bavette. Black Sheep Restaurants has once again nailed the vibe of a very specific genre of restaurant — this time, a bustling alleyway izakaya — while deploying a refined twist when it comes to the details of the food and drink. It follows that customers should be expecting to pay a premium above the prices you’d find at a real yokocho eatery in Japan, but from our first impressions, the value added is more than worth your dollar.

Fukuro will open on 15 May for dinner, from 6pm ’til late, Tuesday to Sunday.

Hong Kong Restaurant Opening New Restaurants New Eats Dining Restaurants Black Sheep Restaurants Japanese Restaurants Izakaya Where to eat new openings Restaurant Openings Openings fukuro best japanese
Leslie Yeh
Editor in Chief
Having worked as a lifestyle editor for almost 10 years, Leslie is thrilled to be writing about the topic she loves most: wining and dining. When she's not out pounding the pavement for the latest new restaurant opening or tracking food trends, Leslie can be found at home whipping up a plate of rigatoni vodka and binge-watching Netflix with a glass of Sauvignon Blanc in hand.
Dining Restaurants Food Trends Drinks Travel