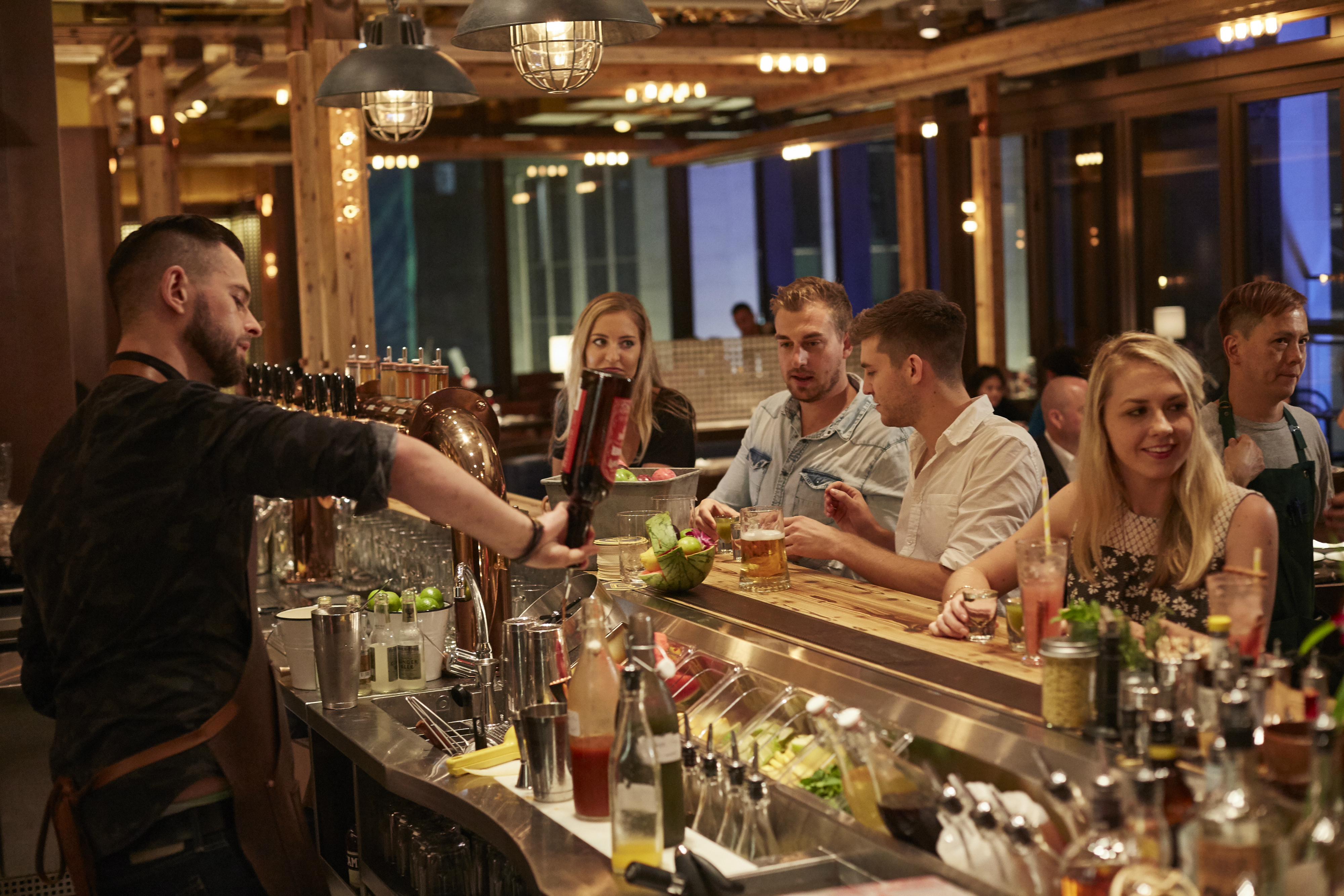 Burger lovers, rejoice: Tucked away on the third floor of Lan Kwai Fong’s California Tower, Beef & Liberty has soft opened its biggest, boldest concept yet. Perched in the centre of Hong Kong’s nightlife district, the restaurant offers locals a stylish spot to begin or end their nights out.

Encompassing 4,700 square feet, this industrial-chic newcomer has a hip, almost rustic feel thanks to the use of bronze and wood, design elements selected by the internationally renowned design studio Autoban, who also designed the interiors of 208 Duecento Otto. Vintage light fixtures and smart lighting design give the place a relaxed, inviting feel, providing a sharp contrast to any of the eateries you’ll find on the streets below. The ambiance will be lively, though: leapfrogging off the success of the Beats & Liberty pop-up at PMQ, the new location will host DJs every Friday and Saturday night from 9-11pm, catering to weekend revellers who want to kick off their nights with good music.

This isn’t just another burger joint, though, nor is it just another Beef & Liberty. With the California Tower opening, the mini chain is expanding the scope of its ambitions. To wit, they’ve hired a new Group Executive Chef: Uwe Opocensky, who previously spent nine years at the Mandarin Oriental, Hong Kong, where he oversaw 10 drinking and dining venues. Though it may seem a surprising move, the chef is passionate about his new role.

“I’m really excited to bring my progressive cooking, experience in fine-dining and creative cuisine to focus on the hamburger and it’s humble accompaniments”, said Opocensky. “We believe we can give our guests a dining experience like they have never had before in a hamburger restaurant.”

As part of his new role, the chef has introduced a list of 10 bar snacks that are unique to this location, including chicken liver parfait, oxtail sliders, and mac ‘n’ cheese bites. As hamburgers are the highlight at Beef & Liberty, old favourites such as the ‘Bacon Cheese’ and ‘Black Pepper Burger’ will continue to be served, but we can expect Opocensky to introduce some new burgers soon.

At the same time that it’s upping its food game, the new location is also placing an emphasis on mixology, and aims to be a place where patrons can sip creative cocktails even if they don’t wish to eat. Overseeing the new bar program is Pawel Mikusek, the award-winning veteran of Lily & Bloom and London’s Duck & Waffle. Mikusek has introduced 12 new signature cocktails alongside 14 international and local draught and bottled craft beers.

The new location of Beef & Liberty is now soft open for lunch, dinner and drinks. The restaurant will be open until 11pm Monday through Thursday, until 2am Friday and Saturday nights, and until 10pm on Sundays.

Dining Restaurants Lan Kwai Fong Beef & Liberty California Tower
Michael Alan Connelly
Head of Digital Content
A Chicagoan by birth and a New Yorker by habit, Michael has more than a decade of experience in digital publishing at leading titles in the U.S. and Asia. When he's not checking out Hong Kong's newest restaurants and bars or jet setting around the globe, you'll find him hanging out with his dog Buster and enjoying an Aperol Spritz.
Travel Hotels Restaurants Cocktails Culture Italy Art Music Cheese

These are the most Instagrammable restaurants in Hong Kong