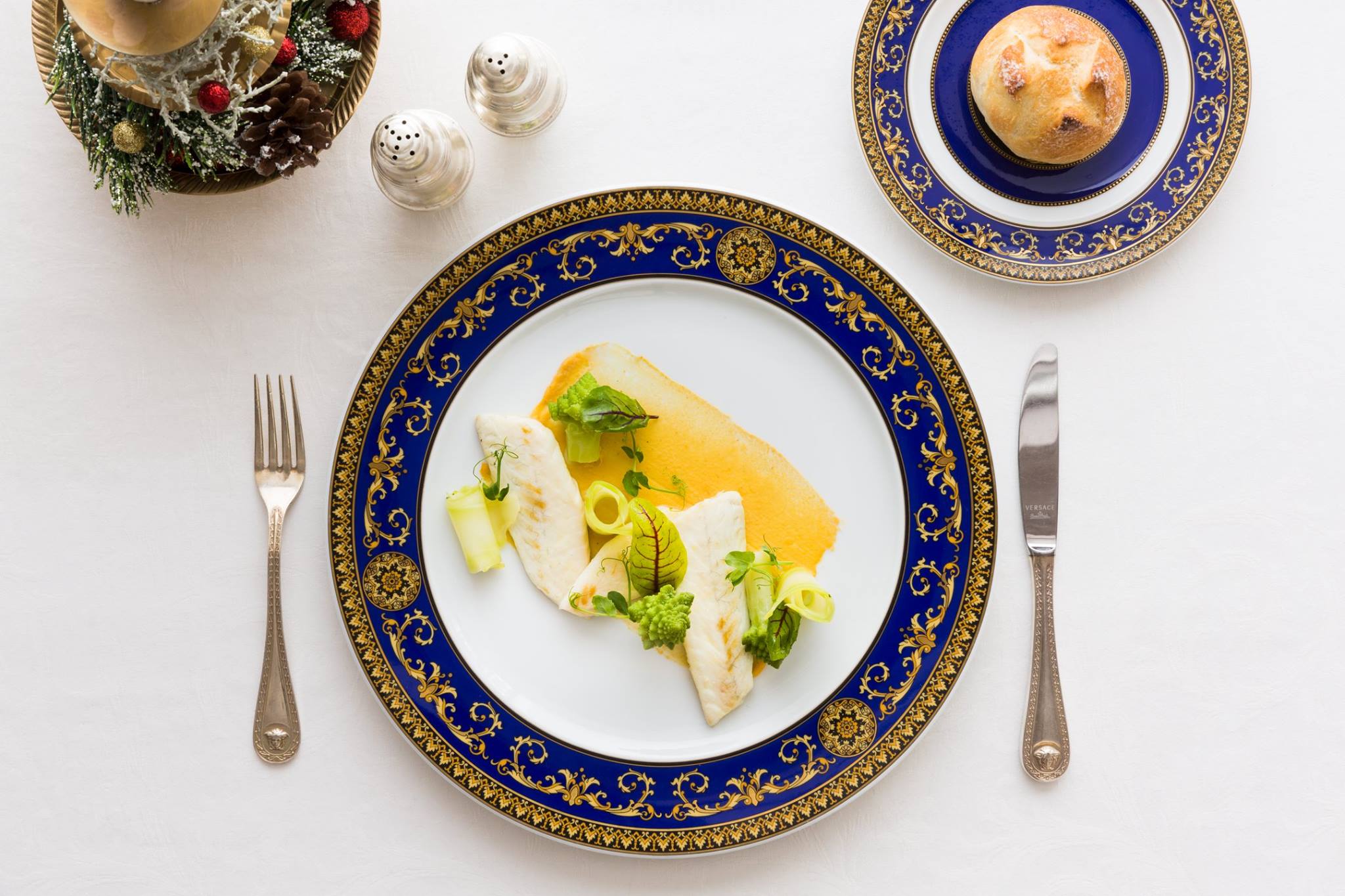 The sartorial world was set abuzz last month, when Gucci announced the opening of Gucci Osteria, an Italian fine dining restaurant helmed by culinary superstar Massimo Bottura. The eatery boasts unobstructed views of the iconic Piazza della Signoria city square in Florence, and has already been attracting droves of tourists and fashion mavens since it launched a few weeks ago. This isn’t the first time that Gucci’s making a foray into F&B — it also runs a café in Shanghai and, a few years ago, operated two now-defunct eateries in Florence and Tokyo.

Serving up hearty pastas and cups of joe may seem rather incongruous with the realm of high fashion — which typically calls to mind lanky models strutting down runways, and elaborate couture pieces that only the rich and famous can afford. But Gucci isn’t the only big name taking this route. Past years have seen the likes of Versace, Maison Kitsuné and Dior hopping onto the dining bandwagon, and rolling out their own eateries. Some labels have even upped the ante by roping in prominent personalities to design their venues. Case in point: Prada, which tapped on film director Wes Anderson to create a quirky wonderland of formica tables, pinball machines, and counters stocked with candy jars.

Ahead of New York Fashion Week that kicks off on 8 February — and the many other fashion events that will take place in the following weeks –, here’s a guide to 10 of the most sophisticated fashion restaurants to see and be seen in. 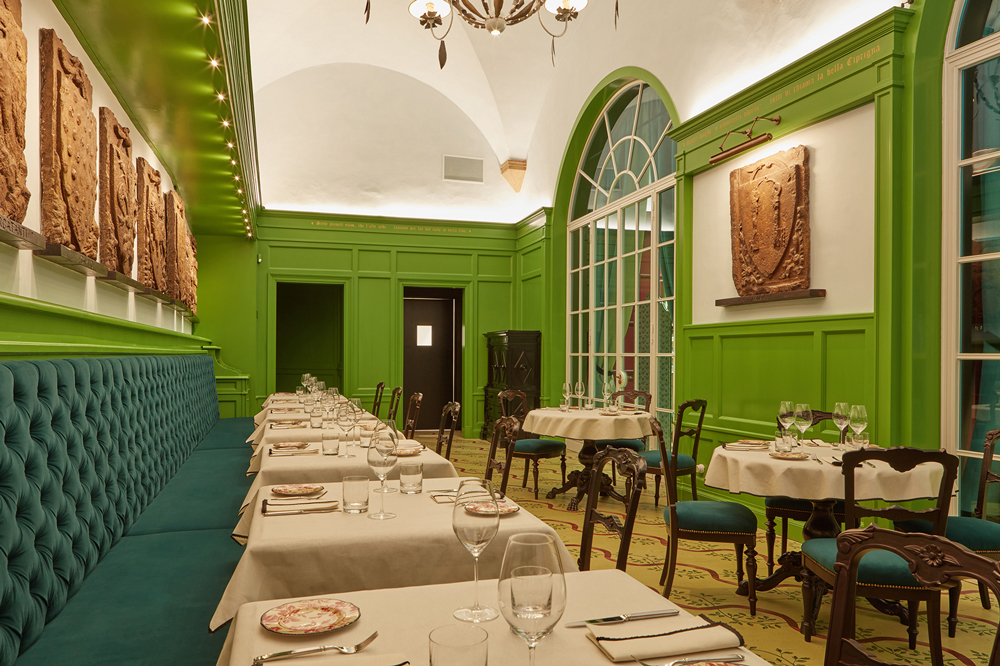 Launched early last month, Gucci Osteria is a cosy green venue decorated with wood carvings, and situated within the new Gucci Garden — a multi-concept space inside the historical Palazzo della Mercanzia. Its kitchen is helmed by celebrated chef Massimo Bottura of the three-Michelin-starred  Osteria Francescana. Expect a carb-heavy menu of pastas and risottos, with highlights such as tortellini with Parmigiano Reggiano, and Cacio e Pepe. 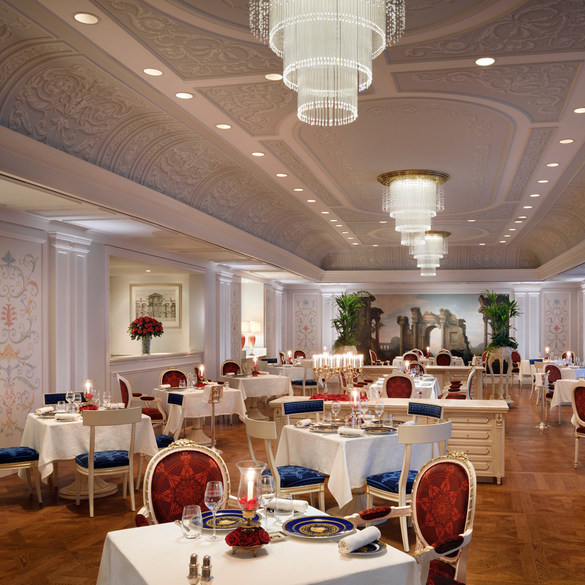 Versace has long been synonymous with opulence and ostentation. So it’s no surprise that its Vanitas restaurant at Palazzo Versace Dubai hotel is an unapologetically swish spot decked out in ornate wallpaper, gold-gilded red chairs, and elegant chandeliers. Guests eat off Versace tableware, and — should they opt to dine alfresco — are treated to stunning views of the Dubai Creek. Food-wise, the establishment specialises in contemporary Italian cuisine the likes of black truffle risotto, wagyu beef carpaccio, and lobster carbonara ravioli. 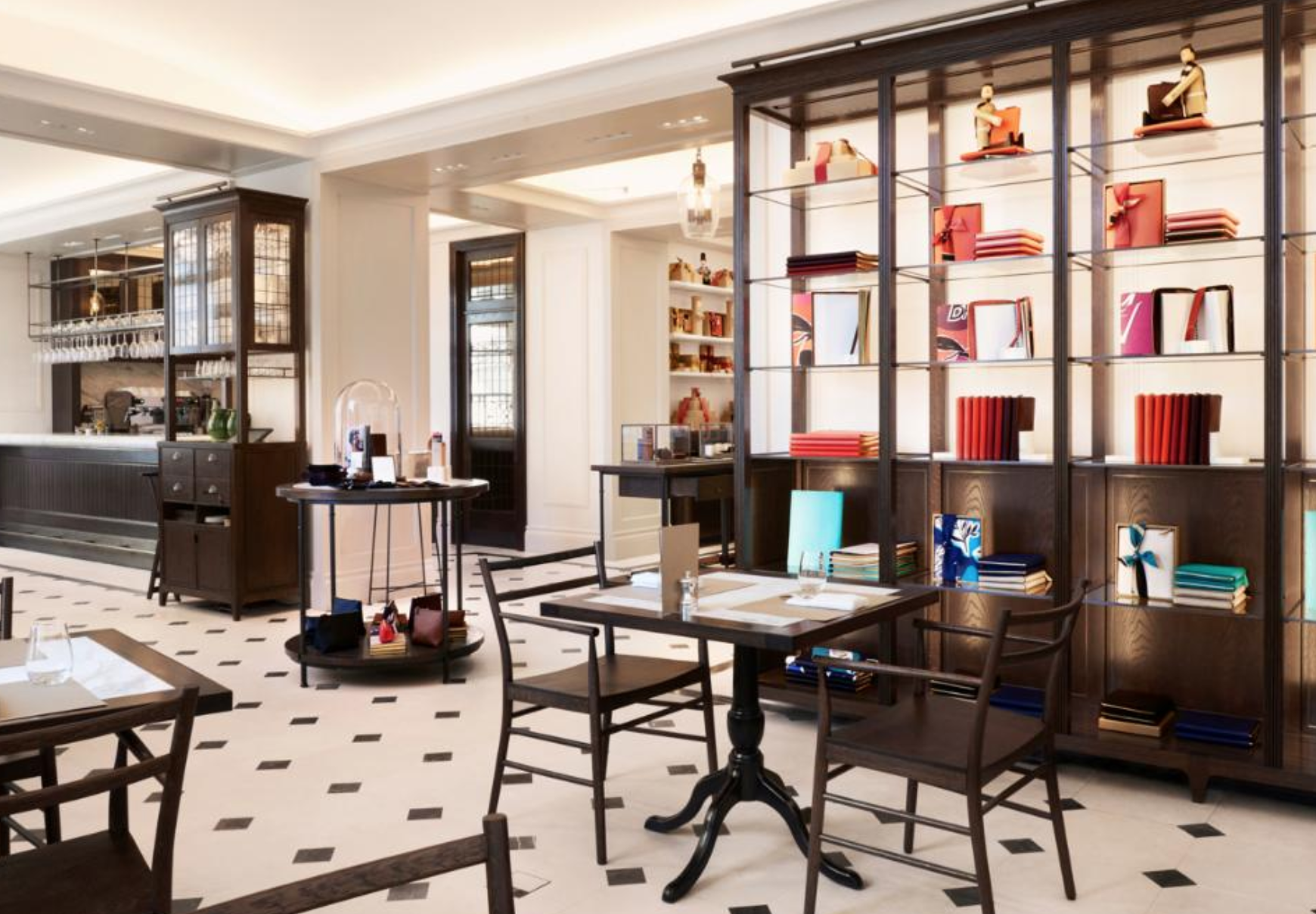 This all-day dining cafe is a charming venue serving up afternoon tea and classic British fare such as sausages and fish pie. Also available in-store are Burberry items such as cashmere blankets, stationery and leather accessories, some of which are exclusive to the cafe. There is even a monogram station where you can customise your leather products. 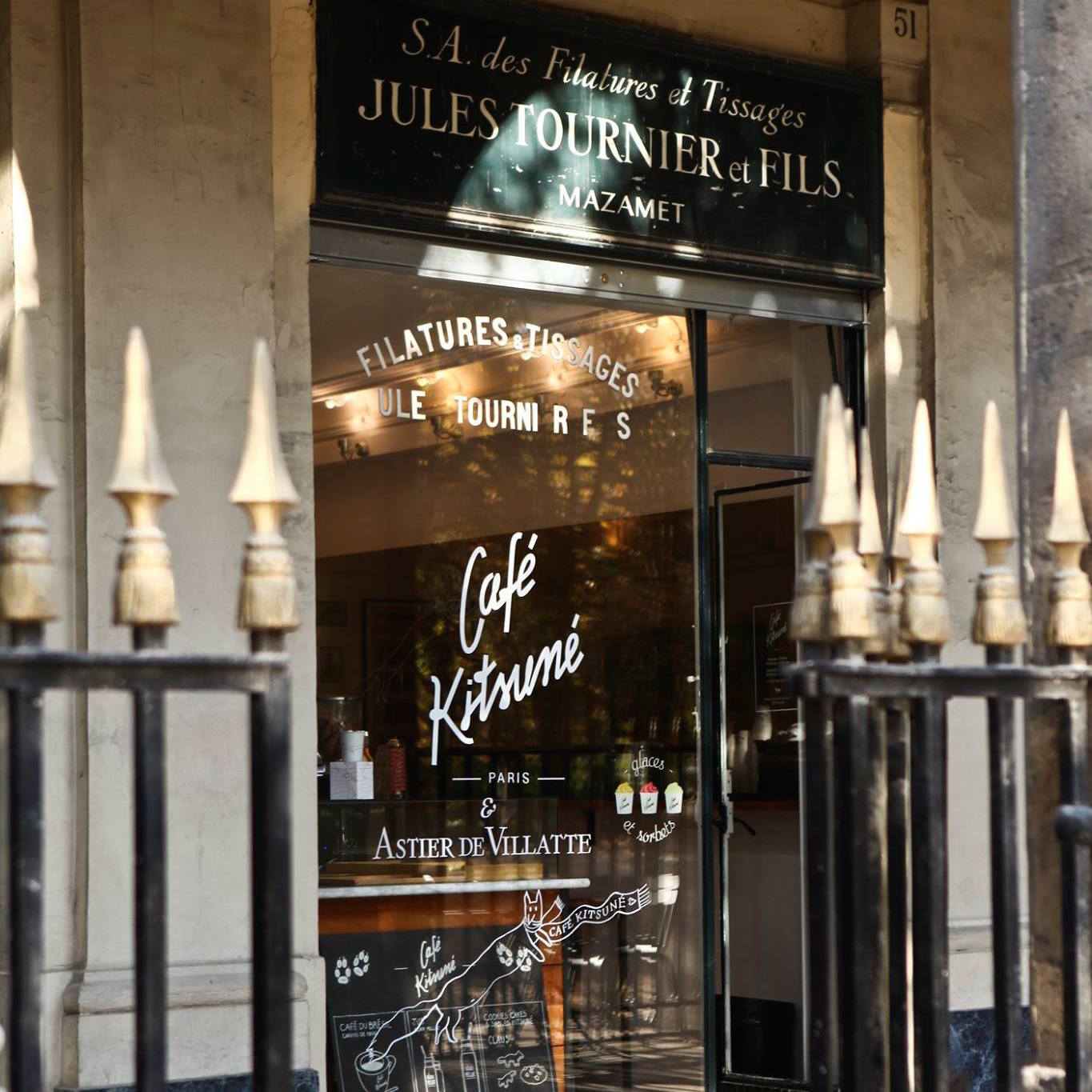 Located amidst the scenic greenery of Jardin du Palais Royal, Cafe Kitsuné is a quaint coffee shop operated by Parisian fashion label Maison Kitsuné. A coffee counter takes up most of the space inside its minimalist interior, so sitting inside can feel pretty cramped, especially when the place fills up. Enjoy your cake and cup of joe outside instead at one of the cafe’s tables lining the sidewalk, where you can also while the time away people-watching and admiring the gardens. The eatery is currently closed for renovations, and reopens on 10 February. Nothing spells Insta-worthy more than a Wes Anderson-designed space. And that’s exactly what the Prada-run Bar Luce offers: Wallpaper printed with Milanese windows adorns its interiors, while its formica furniture is clad in pastel green, blue and pink hues. At the side of the room are retro pinball machines and a jukebox. The whole cafe-bar almost looks like a movie set. Its food and drink repertoire doesn’t disappoint either, with a variety of coffees, cocktails, cakes and pastries. Opened by Armani, this swanky nightspot comprises a luxurious indoor club and a rooftop terrace, where patrons are treated to sweeping views of Hong Kong’s CBD. Feast on pizzas, pastas, and Japanese options such as sushi, tempura, and meats cooked robatayaki-style. For drinks, choose from an extensive selection of cocktails, wines and spirits. 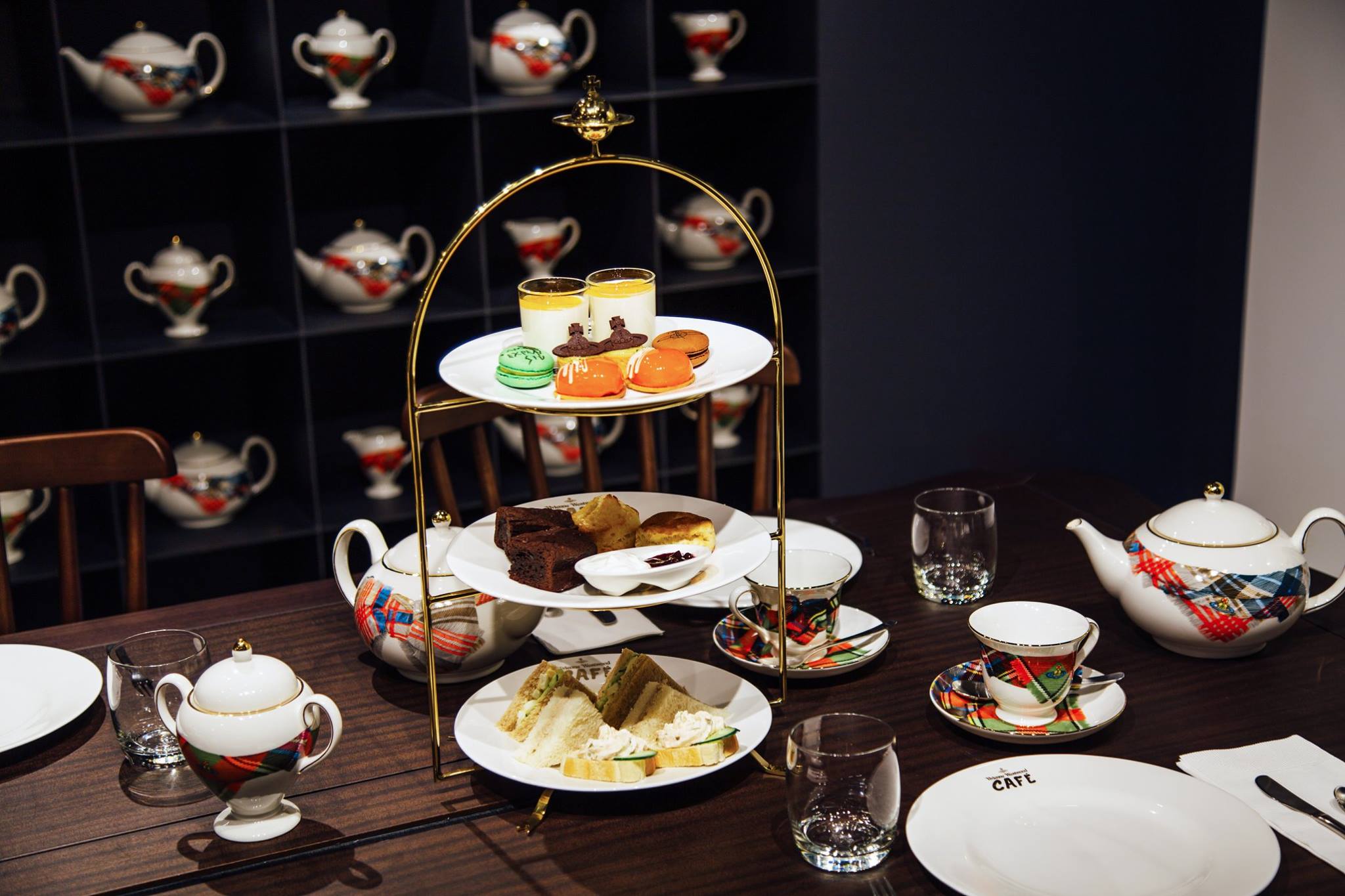 Located within Vivienne Westwood’s concept store in Taipei, this café offers British-style cuisine and afternoon tea. Its food and tableware are beautifully crafted in line with the British designer’s punk rock aesthetic: Think colourful macarons embellished with motifs of saturn, birds and lips (symbols that have appeared in many of Westwood’s creations), and cups and saucers adorned with tartan prints. 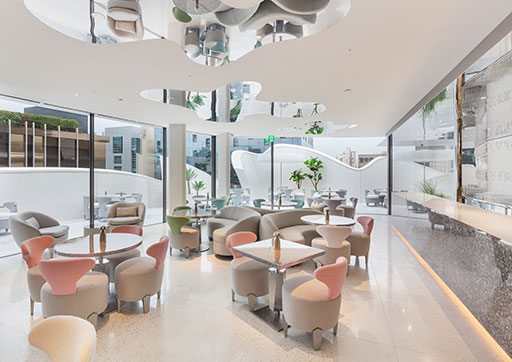 House of Dior made headlines in 2015 when it opened its boutique in Gangnam, Seoul, thanks to its sleek Christian de Portzamparc-designed white facade, and the fact that it was Dior’s biggest flagship at that time. Another noteworthy aspect of the six-storey building was its café, a collaboration with renowned French pastry chef Pierre Hermé. The eatery is a bright, airy space furnished in dainty pastel hues, and serves up a range of desserts, cakes and pastries. Dimly lit, clad in wood and deep green hues, and furnished with leather seats, Ralph Lauren’s The Polo Bar is one handsome space. In a nod to the brand’s equestrian roots, framed pictures of horses hang on its walls. Its menu showcases a variety of burgers, steaks and salads, as well as cocktails and wines. Must-try dishes include the corned beef sandwich and the Polo Bar Burger — a bun stuffed with cheddar, vegetables and crispy bacon.

New restaurants to try in May 2021

12 meals you definitely tried during lockdown

Cinco de Mayo celebrations are in full swing at BaseHall