Hong Kong’s dining scene has gone from strength to strength, and this year impressed upon us again the staggering number of world-class restaurants and diversity of food we have at our fingertips. Whether it was a tandoor grill house celebrating Punjabi food, Modern British infused with Japanese and Peruvian influences, or a Kappo-style tasting counter, the new crop of restaurants in 2017 were some of the best we’ve seen in recent years. As we wind down the year, we’re reflecting back on these chefs, restaurateurs and kitchen teams that made our hearts (and stomachs) sing. 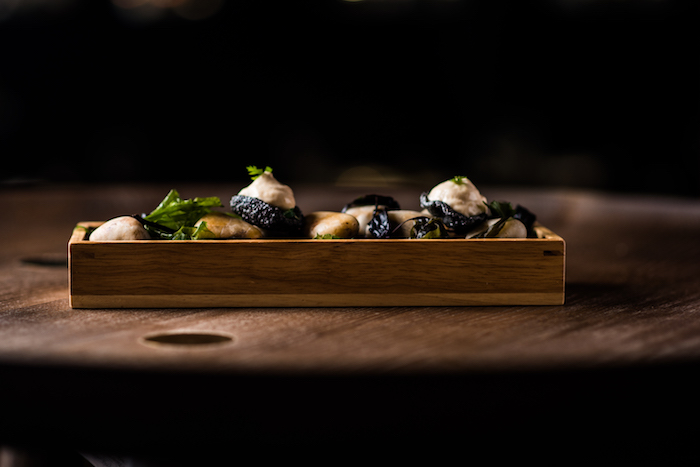 Given Timothy Oulton’s impeccable sense of style, we knew Gough’s on Gough — the first restaurant from the renowned British furniture brand — would be visually stunning, but what we were unprepared for was the equally impressive offerings on the plate. Helmed by chef Arron Rhodes, Gough’s 8-course tasting menu is an eclectic, at times surprising, and precisely thought-out degustation that shows refinement and restraint. It was hands-down one of the best tasting menus we had all year, starting from the crêpe-wrapped beef tartare dusted with shavings of beef heart, to the last bite of lychee sorbet ringed paired with passion fruit mousse, creamy mascarpone, mandarin crisps and gingerbread crumb. Set in Timothy Oulton’s lavishly designed restaurant and bar space, Gough’s is without doubt one of the year’s strongest newcomers. 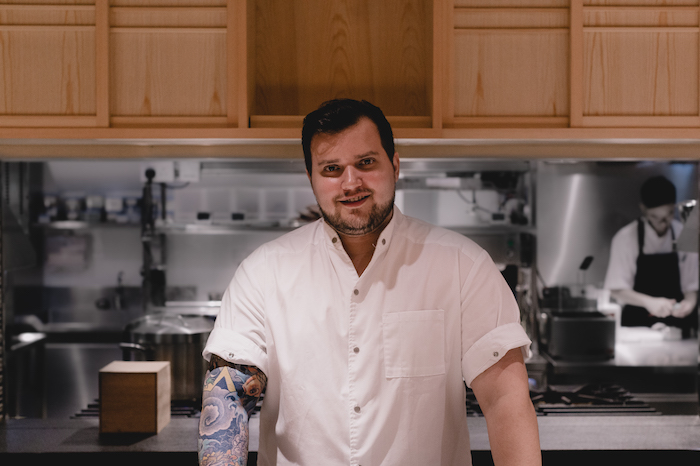 Chef Agustin Balbi left his perch at The Ocean to open his own experimental Japanese Kappo-style tasting counter in Harbour City earlier this year to rave reviews. Given free reign to dabble in an open pantry, Balbi proved the extent of his creativity at Haku, from the gorgeous amuse-bouche of stripped bark and folded beetroot resembling red roses in a ceramic bowl, to plump oysters dressed with apple granita and a bowl of bright Kumamoto tomatoes with salt-cured Japanese barracuda and aged Bellota ham that was unlike anything we’ve tasted before. The intimate counter format makes Haku feel extra worthy of special occasions, with chef Balbi serving each diner personally and keeping a watchful eye at the pass to add the final artistic touches to each carefully composed plate. The InterContinental Hong Kong made a clever move when it replaced the somewhat-dated Spoon by Alain Ducasse with Rech, the Parisian-based seafood temple from the world-renowned chef. Gaining a Michelin star in its first year, Rech has upped the standard for hotel dining, offering a premium seafood menu that befits its prime waterfront location. The light, bright and elegantly outfitted seaside venue transitions into an intimate and romantic setting at night, with carefully placed touches such as natural stone centrepieces and one-of-a-kind Japanese gyotaku fish prints on the walls setting a distinct sense of place. Come here for the finest ocean produce prepared to world-class standards, followed by a selection of sumptuous desserts, including the signature 30-day aged Normandy camembert cheese and the “Mr Rech” — a hazelnut ice-cream sandwich made with meringue biscuits and a melted chocolate coating. 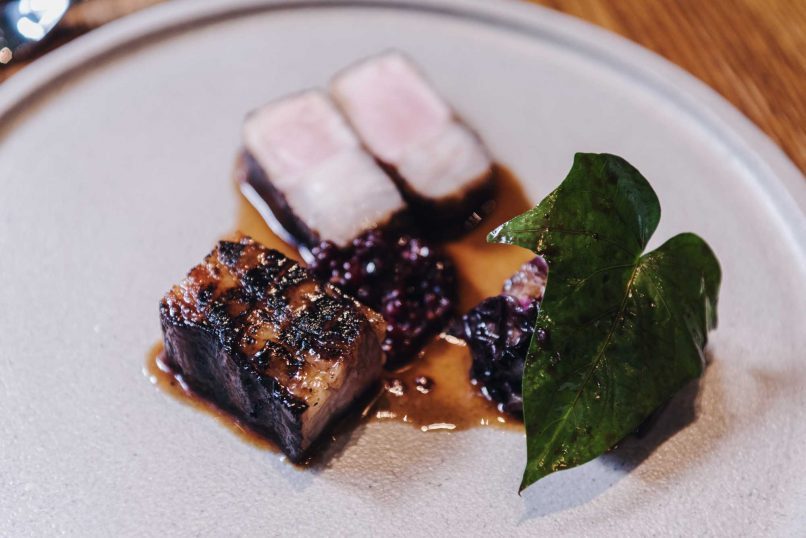 Slipping under the radar, Beet recently popped up on Kau U Fong in Central and is just starting to gain a bit of traction in local foodie circles. Well, we’re here to share the secret: This gem of a restaurant is everything you’ll seek for in a great restaurant — a cosy atmosphere, attentive service, a well-curated drinks list and value-for-money. The star of the show is Singaporean chef Barry Quek, who weaves magic in dishes such as the porc noir de Bigorre, where two perfectly cooked pieces of fatty belly and lean loin are complemented by charred radicchio and blackberry for bitterness and depth. Rooted in French technique with strains of Nordic influences seen throughout the menu, the food at Beet is surprising and sophisticated, leaving a lasting impression. It’s no surprise given the pedigree of the knowledgable staff, including Raph Holzer, former master mixologist at Yardbird. 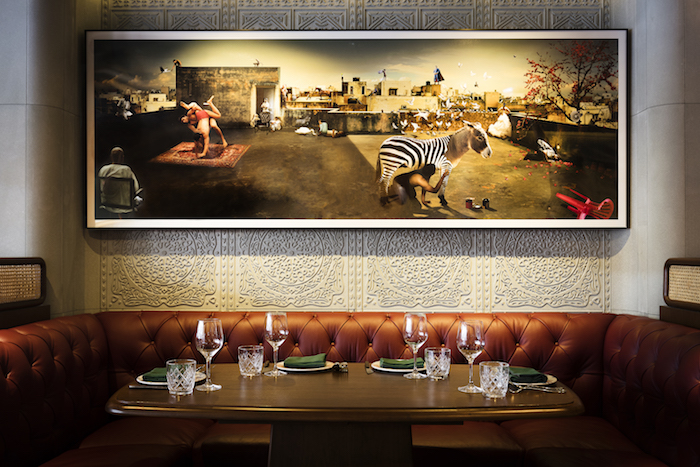 If we were in any danger of feeling jaded with Hong Kong’s dining scene, the arrival of New Punjab Club snapped us right back out of it — another winning concept from Black Sheep Restaurants. The brilliance of each BSR restaurant is in its ability to transport you to a specific time and place, and New Punjab Club is no different, this time whisking us away to post-colonial liberated Punjab. NPC is a special passion project from co-founder Syed Asim Hussain, and it shows in every meticulously thought-out detail, from the specially commissioned tile walls to the striking artwork sourced from Hussain’s own collection. And that’s all before getting to the food: It’s simply some of the best Indian food we’ve had in Hong Kong, from the smashed samosas that sing of Indian street food, to the earthy keema pau cooked down in a fragrant lamb broth, and a phenomenal butter chicken recipe passed down through generations — all executed with a deft hand by ex-Gymkhana head chef, Palash Mitra. There are few who can resist a plate of fantastic homemade pasta, as evidenced by the popularity of Pici, a pasta bar concept from the duo behind Pirata and The Optimist, which debuted in February. Steering the ship at this cosy Wan Chai kitchen is the talented Andrea Viglione, a born-and-bred Italian who does wonders with fresh pasta dough. He’s churning out some of the best pastas in the city, from the hearty pappardelle in a slow-cooked beef ragu, to the flawless classic lasagna and the supple strands of tagliatelle enriched with butter, parmesan and porcini mushrooms. The menu is barebones save for the pastas, but that’s what we love about Pici — you come here with one thing on your mind, and you’ll leave completely satisfied and stuffed to the core. And for those who’ve been let down by the long wait for a table, you’ll be glad to hear that Pici’s just opened a brand-new, much larger location on Aberdeen Street in Central. 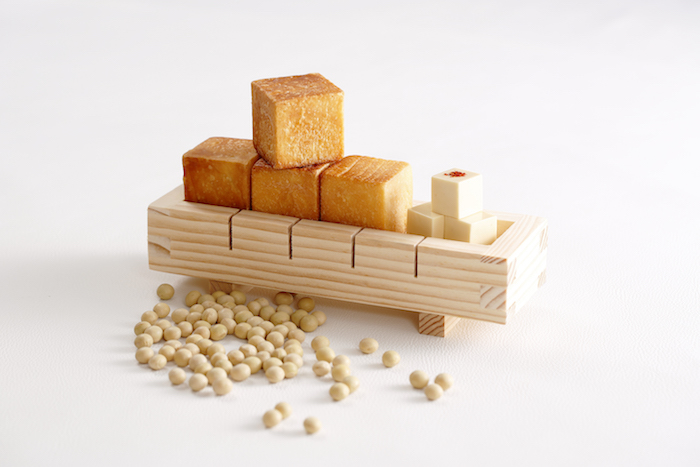 While chef Vicky Lau is already a superstar in the food world (having gained a Michelin star at the original Tate Dining Room & Bar and won the title of Asia’s Best Female Chef 2015), she showed us that she has much more up her sleeves with the unveiling of the new Tate on Hollywood Road this year. Set in shades of pastels and pretty pink, the space is utterly feminine yet completely refined and elegant, a reflection of the meticulous, detail-oriented chef who maintains the Michelin-starred standards of the kitchen day-in and day-out. She caught the attention of the rigorous food inspectors again this year with her debut ‘Odes’ menu, which blew us away with its ingenuity with dishes such as silky foie gras bathing in a Chiu Chow marinade, cubes of brioche with tofu butter (picture above), and fried Menuke fish in a silver needle tea-infused broth. 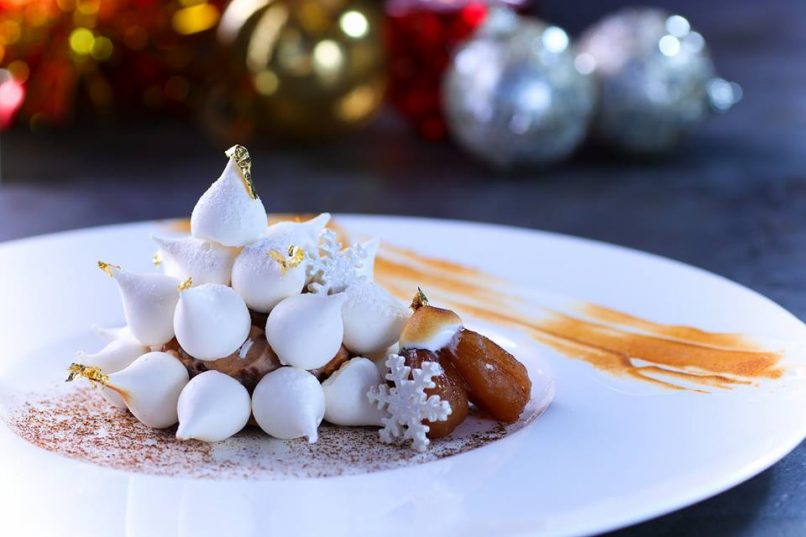 Restaurants that afford spectacular views can often equate to mediocre or overpriced dishes, which is why it was a revelation to discover the superior quality of the dishes at Le 39V, a Parisian transplant from award-winning chef Frédéric Vardon. The dishes here have made the trip across the continental divide in mint condition, with traditional French dishes presented with an artistic flair from pan-fried foie gras to niçoise-style red mullet and roasted Bresse pigeon in tangy jus. The desserts are particularly swoon-worthy here, including one of the best we had all year: the classic Paris-Brest with its crystalline nest of golden spun sugar and puffs of decadent hazelnut cream. The world-class restaurant is rounded out with top-notch service, a worthy wine list, and of course, the breathtaking view from atop the 101st floor of Hong Kong’s tallest skyscraper. Although kept largely under wraps, it’s no surprise that chef Uwe Opocensky’s first solo venture on Hollywood Road has been sold out almost right from the get-go since opening this fall (keep your eye on seats to be released after January here). The former Executive Chef of Mandarin Oriental turned heads last year when he quit his post to join burger joint Beef & Liberty — which he helms now in addition to his eponymous restaurant. Guests truly have the pleasure of dining in the company and kitchen of Uwe himself, with the steadfast chef preparing a meticulous 6-course dinner for a small number of diners each night. If you can manage to score a reservation, expect to be blown away by the exceptional level of cooking, top quality ingredients, and fantastic wine pairings from a unique selection of growers. The sense of hospitality is inherent from the moment you step through the doors — undoubtedly one of the city’s most exciting dining experiences of the moment.

Hong Kong New Restaurants New Eats Dining Restaurants Tate Where to eat Rech by Alain Ducasse pici haku gough's on gough le 39v best new restaurants uwe beet best chefs hong kong's best eats
Leslie Yeh
Editor in Chief
Having worked as a lifestyle editor for almost 10 years, Leslie is thrilled to be writing about the topic she loves most: wining and dining. When she's not out pounding the pavement for the latest new restaurant opening or tracking food trends, Leslie can be found at home whipping up a plate of rigatoni vodka and binge-watching Netflix with a glass of Sauvignon Blanc in hand.
Dining Restaurants Food Trends Drinks Travel