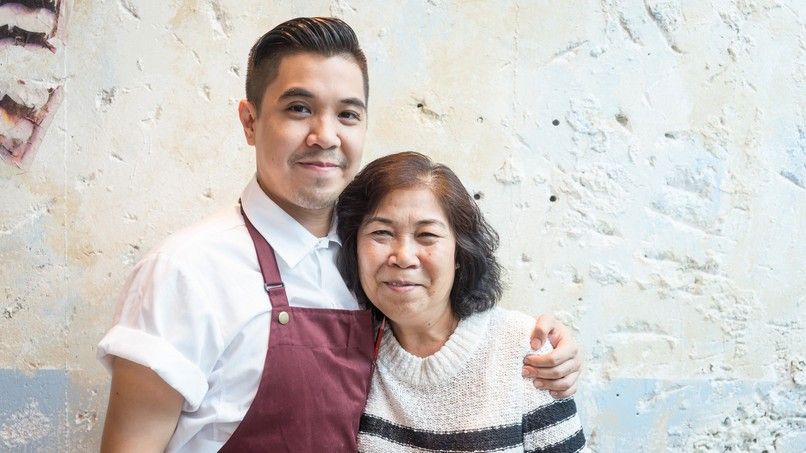 Along the stretch of trendy cafés and restaurants in the Star Street Precinct, there’s a restaurant that at first glance might evoke memories of chic brasseries in Paris’ ninth arrondissement. But its name is more telling: Le Garçon Saigon, the Saigonese boy. At the very heart of this Vietnamese grillhouse is a chef who was born in Brisbane, ventured into the kitchens of Sydney and opened a restaurant in Hong Kong, yet is a Saigonese boy through and through.

Chef Bao La, better known simply as Bao, literally grew up inside his parents’ restaurant. Their business carried on for 25 years, with mum running the kitchen and dad taking care of the front of house. “I just loved being inside the kitchen,” Bao laughs, “my after-school care, holidays, that’s where I was. My first job was actually to roll rice paper rolls, so I got up on a stool and started rolling away. Just never stopped from there.”

The younger of two sons, Bao was happy to keep himself entertained by watching his mum and trying his hand at tasks in the kitchen, while his teenage brother preferred to get out and see friends. “[Being a chef] is a tough gig. For any kid growing up, seeing your parents work so hard, you don’t wanna follow that lifestyle,” he muses. But it was different for him, as he saw it all as a lot of fun to learn from mum, and counts her as his greatest mentor, biggest source of inspiration, and still the better cook. Best of all, there was never any pressure: “That’s why mum’s a champion, she tells us to just be happy.”

Sitting across the table from mother and son, it’s evident how close they are. As Bao chats with us, Mrs. La gazes at him adoringly and beams with pride. But she also teases, “He’s lucky [to follow me]!” She held him to exacting standards from the beginning and even now, Bao admits that mum’s advice is always best. In fact, when Christopher Mark and Asim Hussain, the co-founders of Black Sheep Restaurants, first approached Bao about starting this concept, he said that Mrs. La would have to be on board to help out. And when a new dish is in the works at Le Garçon Saigon, Bao still turns to her for advice on preparing, marinating and cooking. “Every time!” Mrs. La says with a chuckle.

Bao’s independent career began when it was time for his parents to sell the business, pay off their debts and simply enjoy life in retirement. Right away, chefs Dan Hong and Jowett Yu invited Bao to work at Mr. Wong in Sydney. He honed his skills there before embarking on his first international foray to help chef Yu open Black Sheep Restaurants’ Ho Lee Fook on Elgin Street. He added Vietnamese touches to the modern Cantonese cuisine, and whipped up chả giò (minced pork sausages) and bánh xèo (savoury pancakes) for staff meals, which eventually led to Chris and Asim’s invitation for him to introduce southern Vietnamese cuisine to Hong Kong.

“If you told me when I was in uni that, in 2016, you’re gonna be in Hong Kong doing a grillhouse, I’d have been like, ‘Mate, you’re joking, what are you on about?’ Never would have thought it,” Bao says. At Le Garçon Saigon, the driving force behind his cooking is a desire to show that there’s so much more to Vietnamese food than a bowl of soup, as newcomers still ask for pho nearly every day. With a tinge of indignance, Bao points out that one wouldn’t walk into just any Chinese restaurant looking for wonton noodles, nor go to a roast house for fried rice.

Still, there’s hope for Hong Kong diners yet. When Mrs. La opened her restaurant in 1986, Australians weren’t used to the freshness and raw greens, and would marvel at how the rolls weren’t deep fried. But now, plenty of people know how to roll rice paper, and they realise how nourishing the cuisine really is. Robust flavours are balanced by the refreshing herbs, and there’s very little oil in the dishes. While Chinese roasts are typically served with rice and sauce, Vietnamese dining mandates an accompanying spread of lettuce, cucumber and mint to lighten the meats.

On a recent trip to Ho Chi Minh City, Bao experienced a gastronomic revelation at a hilltop village called Làng Nướng Nam Bộ. “That’s the best,” he exclaims, face lighting up as he savours the memory, “I love that place, I had this black pepper roast duck and thought, this is delicious!” He also fell in love with a place that grilled all sorts of seafood, from crustaceans to octopus, and wanted to replicate their techniques at Le Garçon Saigon. Thankfully, Mrs. La was on hand to help Bao out and speak with the cook about their methods.

Given his experience roasting geese at Ho Lee Fook, it’s no surprise that Bao’s new duck dish garners rave reviews. Although the Vietnamese tend to overcook their meats, Bao keeps the duck perfectly pink and juicy through a two- to three-day Chinese-style process of brining and drying, then slowly roasting it for an hour. And instead of charcoal, he uses almond wood to impart a subtle fragrance.

Bao also takes inspiration from Burnt Ends in Singapore and Asador Extebarri in Spain. “It’s the technique of cuissón,” he explains, “grill it until it’s just right and the protein has just broken down.” Flying in the face of traditional beliefs about cooking meat, Bao grills his steak for a shockingly long hour and a half: he puts it right on the embers for ten seconds each side, lets it come to room temperature, and then repeats the process about 20 times. This leaves a crispy char on the outside and a pink inside that might look rare, but is actually medium. Bao shakes his head. “People are used to things being cooked a certain way [but we] slowly temper the proteins, and cooking over fire takes a lot of skill, a lot of work.”

Mrs. La proudly interjects to assure us of how soft and beautiful the meats turn out. And with this technique down pat, Bao’s obsession with grilling is extending to even more ingredients, especially given the quality of fresh produce in Hong Kong markets. Vietnamese people don’t grill vegetables, but he throws on Chinese staples like kai lan and tofu, and wants to try out surf clams and even strawberry clams.

A believer in sourcing the best produce possible, Bao brings in fish sauce specially made for him in Vietnam but chooses local chickens because, according to him, “No one can do better chickens than Hong Kong. It’s just so silky and smooth!” He’s also got his own local fish farmer reeling in the best catches of star snapper and live prawns, and he uses fresh herbs grown in the New Territories.

Ultimately, Bao’s cooking is about simplicity, and making sure it’s delicious enough to keep people coming back. He wants Le Garçon Saigon to be accessible to everyone, and is delighted that some Wan Chai locals enjoy his food a few times a week. It helps that the Saigon-style cuisine is ideal for the searing summer heat now, but when it gets cold, he’ll have to crank the ideas up. He’d never put pho on the menu, though, because “it would just go against what we are. This is a sharing place.”

Now that Bao is helming his own kitchen, work has rather taken over his life as he checks his phone 24/7 to see what’s going on in the restaurant. In the rare pockets of time he gets to himself, he submerges himself into local culture, learning Cantonese, taking advantage of the closing specials at wet markets, and eating at local restaurants with his girlfriend. But in a perfect world? The convivial chef grins and says, “I’d love to sit on a couch and just watch TV… or park myself on YouTube, watching people scaring cats or whatever.” Determined to start up his own YouTube channel one day, he’d love more time to make videos that take people into his kitchen, and to update his Instagram more regularly.

One passion Bao does carve out time for, however, is giving back to Vietnamese society. He counts himself fortunate that his parents managed to flee a war-torn country, albeit by escaping on a boat with no possessions and not knowing where they would go. So when one of the fathers of Vietnamese cuisine, Luke Nguyen, invited him along to Taste of Australia, Bao jumped at the opportunity. As part of an initiative to introduce Australian produce to Vietnam, he conducted classes to equip Vietnamese students with exposure to professional culinary skills. “Being a chef might be one of the hardest, most tearful occupations, but it can take you around the world, [especially] as a Vietnamese passport doesn’t allow them to go places.”

Earlier this month, he also worked with Jimmy Pham’s KOTO (Know One Teach One), an organisation that helps disadvantaged Vietnamese youth develop life skills. “They don’t have to continue being a chef, these skills just make them a better person.” And by giving them an appreciation of how cool Vietnamese food is, even among the ranks of Western cuisine, Bao also wants to instil in them a pride for their heritage.

As Mrs. La boasts, “Some kids in Australia won’t speak my language. Not Bao. Bao is very good, he can write.” Back then, Bao may have been forced to speak, read and write Vietnamese, and he used to be teased about his name in school. But once he was older, he realised how all this inculcated a sense of identity and gave him something to be proud of.

So, is he a true Vietnamese boy at heart? “Yeah definitely. As a kid, it was like, what am I? Am I Australian or am I Vietnamese? But I’m just Australian [born] Vietnamese.” And indeed, he is Le Garçon Saigon.