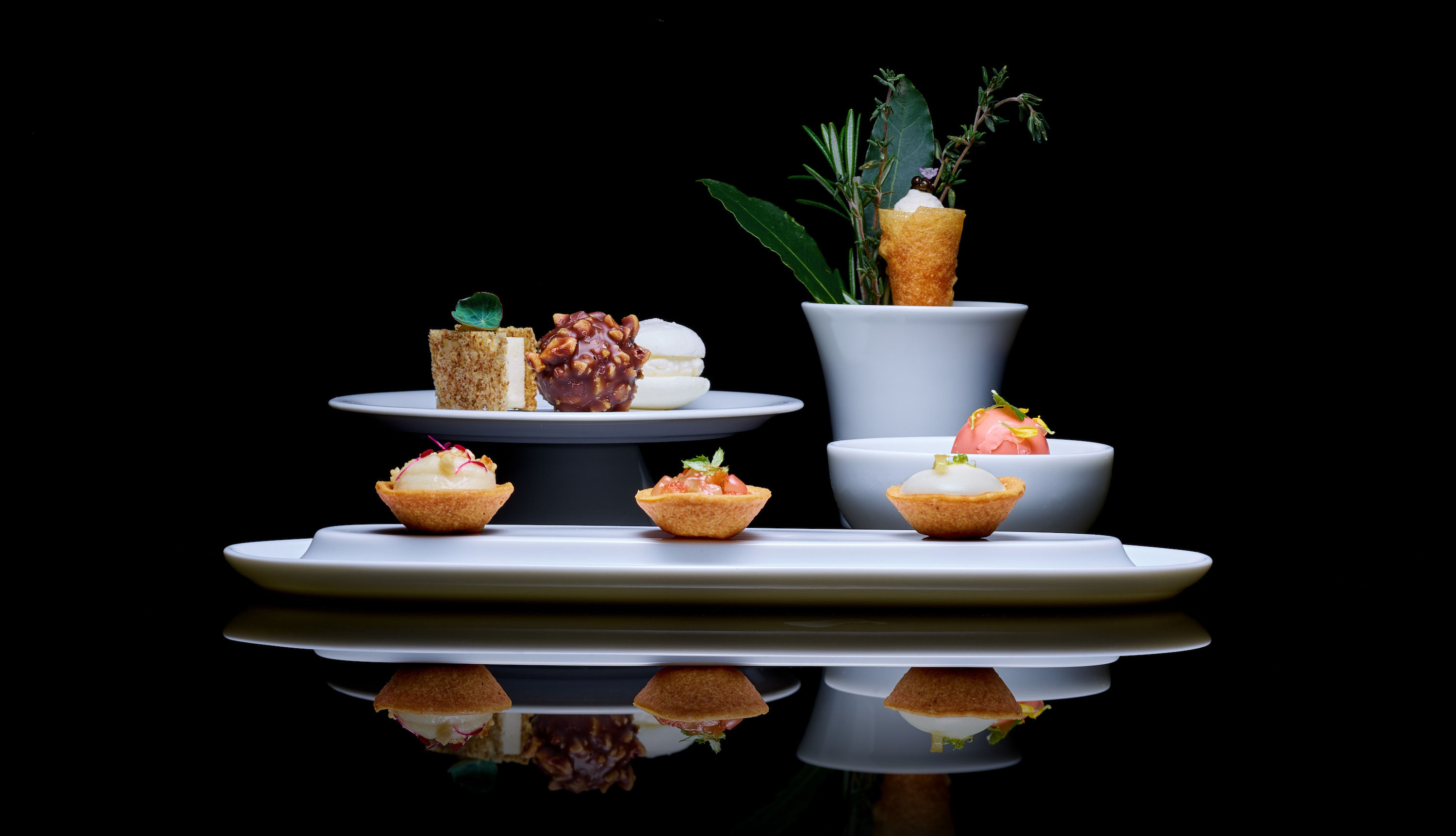 Le Pan, a temple to French fine dining, is set to open in Kowloon Bay

If your New Year’s resolution is to make it cross-harbour more than twice in 2017, we’ve got a pretty good reason for you to kick-start your goal this month: Le Pan, the avant-garde temple to French fine dining by award-winning Singaporean chef Edward Voon, will debut in Kowloon Bay in a few weeks’ time, and the trek is well worth it to taste some of the most ingenious new fare to hit our city.

Walled up in the Goldin Financial Global Centre a 15-minute walk from Kowloon Bay MTR, Le Pan takes inspiration from the Palace of Versailles in its ornate and expensive decor, outfitted from floor-to-ceiling in white marble, cascading chandeliers, plush white leather armchairs and fine crystal tableware. Soft yellow backlighting casts a mellow glow on what would otherwise be a starkly white space, with spacious private rooms, spaced-out seating and winding corridors making diners feel as if they were communing in a grand summer palace somewhere in the French countryside, rather than a formal dining room.

The massive, industrial-sized kitchen is a dream come true for experiential progressive chef Edward Voon, who has trained under El Bulli alum Paco Ranchero and worked for the past six years as a private chef for the Chairman of parent company Goldin Dining Group Limited. The young chef played a major hand in outfitting the space, including helping design the Molteni stove which was custom-built and flown in from France. In the corner, there’s a 100-litre liquid nitrogen tank beneath a row of pickling jars and homemade kombuchas, and a separate bakery downstairs which churns out cakes, cookies and homemade bread daily. In this culinary playground, Voon spends day-in and day-out conceiving new ideas and improving on recipes. The innovative cook is a perfectionist in every sense of the word, settling on the final version of a dish after dozens of modifications only to scrap it the next day for a fresh idea.

“It’s purely imaginative, contemporary French re-invented,” says Voon. “We want diners to experience the creative side of the cuisine, how we can transform a simple thing into something really amazing. There’s never a perfect meal, never a best experience… only a true experience.”

With limitless creativity in the kitchen and a lack of practical restrictions, diners can expect to encounter a new tasting menu at each visit. As one of the first to try chef Voon’s debut menu, we were captivated by the ingenuity, finesse and thought that went into each plate. A plate of whimsical amuse-bouches set the tone for a transformative meal, from a bite-sized buttery tart filled with lemon jelly to a light-as-air beer macaron and a sheet of crispy, intensely flavoured chicken skin. The starter was a chef’s signature: sea urchin and botan shrimp topped with lobster jelly and a quenelle of crystal caviar. The marigold strands of jelly were formed from a slow-simmered lobster stock, infused with saffron for a sweet perfume. Dotted with purple flowers and lily pads, the dish was both sophisticated and highly technical.

Main dishes will please both seafood and meat lovers, with the kitchen showing an aptitude for both. Our Hokkaido scallops were pan-seared to a perfect golden-brown with a translucent, plump interior bathed in a bright yellow carrot emulsion. The seafood medley was topped off with beautiful baby carrots and handmade ravioli filled with squid cream, light as air with the thin golden wrapper trapping in the essence of the sea.

Roasted whole with the carcass and de-boned and cut at the last-minute to keep much of the blood inside, Chef Voon’s version of pigeon may make some queasy, but close your eyes to the bright red, almost-raw sight of the meat, and be treated to an intense, richly flavoured bite. The tender, unbeatable texture and luxurious mouth feel will make you second-guess the way you’ve had pigeon at other establishments in town.

A love of experimentation and molecular-inflected techniques from chef Voon surfaces most in the playful desserts, including a greek yoghurt, strawberries and hibiscus dish that again teased our notions of food and ability to decipher ingredients on a plate. Resembling a giant ball of burrata, the yogurt foam develops a smooth, thin membrane in an algae bath, holding its structure in a pool of bright red hibiscus soup with marinated strawberries, lemon and thyme. The result is a refreshing and intriguing dessert, followed up by a dainty collection of chocolates and petit-fours.

Other dishes to look forward to include kingfish with Bouchot mussels, black olives and Jerusalem artichoke, beef short ribs broth with bone marrow and root vegetables, and Brittany blue lobster with cauliflower and squid emulsion. Foams, infusions and emulsions feature prominently on the menu, but flavours are unmasked by scientific techniques — nailing unique and interesting flavour profiles and intensifying the natural characteristics of top-notch ingredients is the priority of the kitchen, and the result is a memorable journey through modern gastronomy that we won’t soon forget.

With hopes for a Michelin star from the get-go, Le Pan shows promise of becoming one of the best newcomers of the year, and we’ll be back for another rendezvous through chef Voon’s creative processes when the restaurant officially opens its doors.